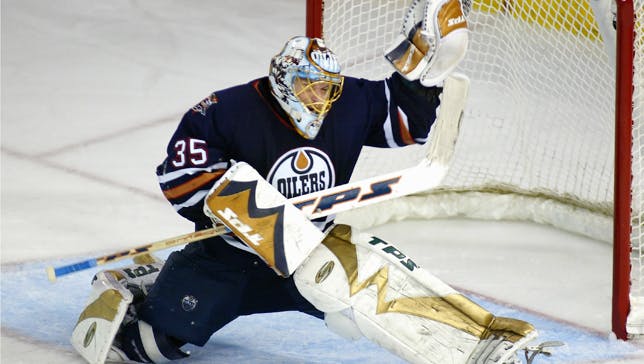 By Cam Lewis
1 month ago
The Edmonton Oilers made a lot of trades during the 2005-06 season to patch together a team that could compete for the Stanley Cup. The most important one that they made was also the riskiest.
Though a mediocre record might have indicated otherwise, the 05-06 Oilers were a strong team. They had a deep offence, as nine different players scored 10 goals or more, and they could lock things down defensively, as no team in the league allowed fewer shots against than they did.
The trouble was that they couldn’t keep the puck out of their net. The trio of Jussi Markkanen, Ty Conklin, and Mike Morrison posted a save percentage around the .880 mark and the team floated around in the middle of the standings as a result.
Come trade deadline time, the Oilers were clinging to the eighth spot in the Western Conference with other middling teams around them on the rise. General manager Kevin Lowe pulled the trigger on a huge move, acquiring veteran goaltender Dwayne Roloson from the Wild in exchange for a first-round draft pick. 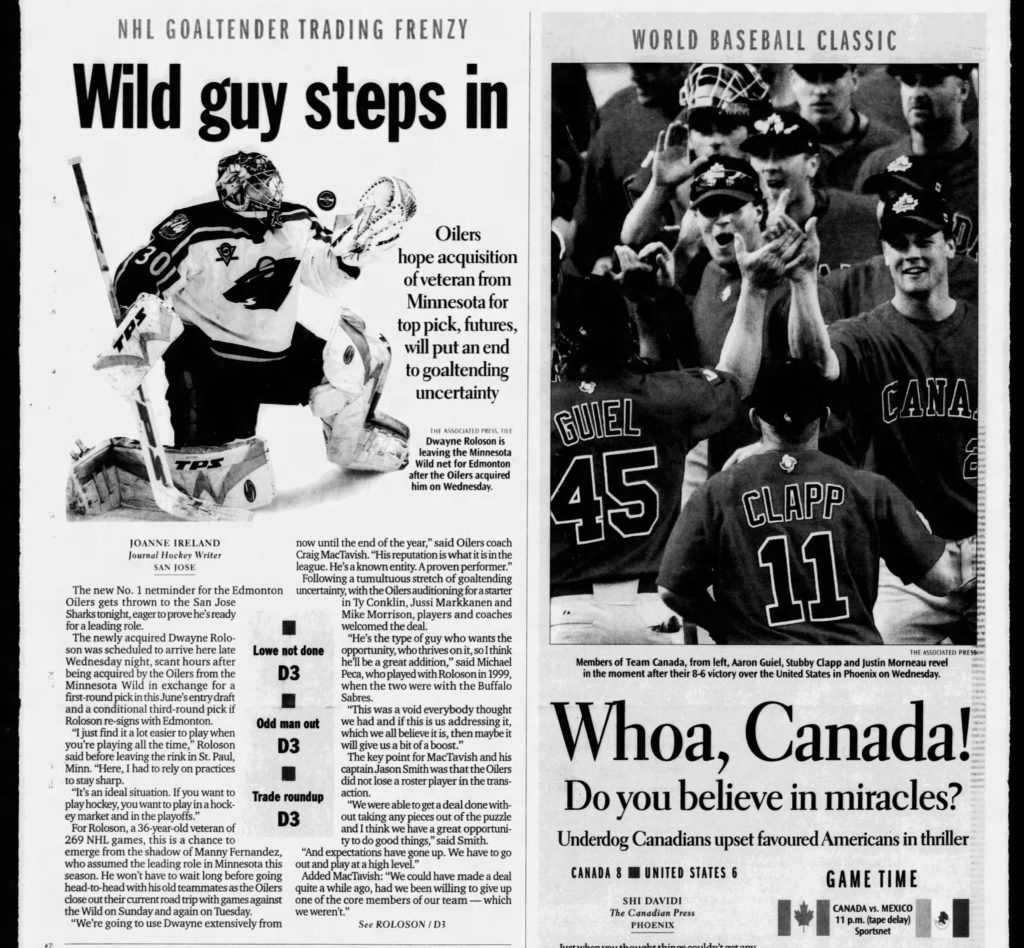 The risk involved with this trade was obvious. The Oilers were trading a first-round draft pick to a division rival despite the fact they hadn’t yet locked up a playoff spot. If things went south, Edmonton could have wound up sending the Wild a selection near the top 10 of the draft, potentially handing them a player that could haunt them for years.
At first, things didn’t look good. Roloson allowed five goals on 31 shots in his first appearance in Edmonton’s net, a 5-2 loss to the surging San Jose Sharks. A couple of days later, he allowed four goals in a loss to the miserable Columbus Blue Jackets. The next day, it was another four goals against and another loss, this time to Roloson’s former team, the Wild.
Roloson didn’t have to wait long to get his revenge. In the second leg of a back-to-back in Minnesota, Roloson stopped 30 of 31 shots that the Wild threw his way, outdueling his former goaltending partner Manny Fernandez for his first win as an Oiler. 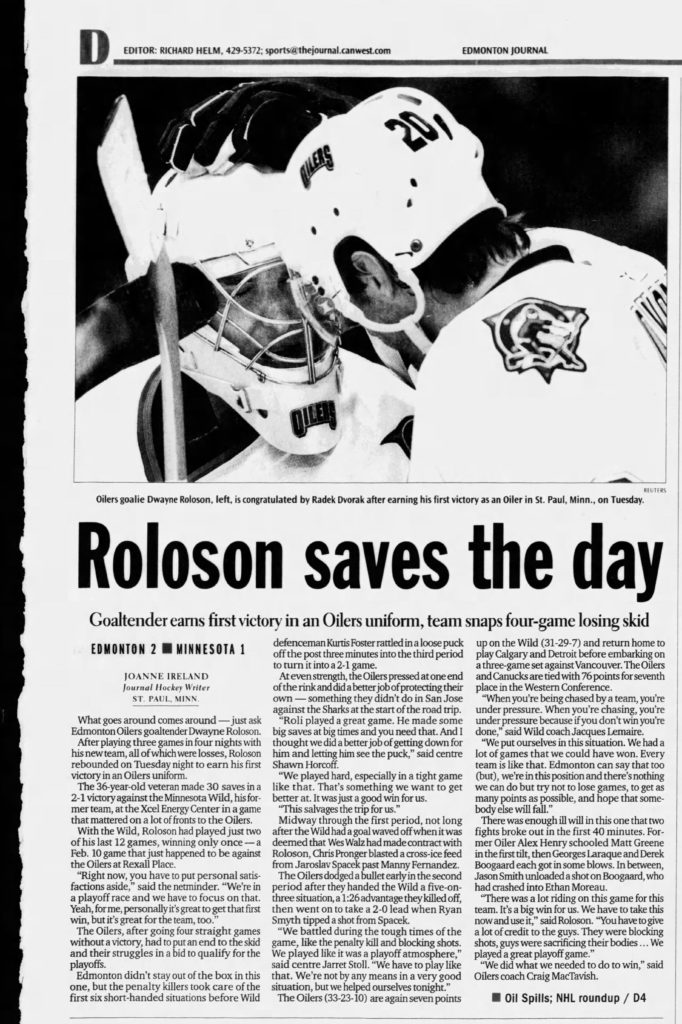 After a shaky performance in three games in four nights to kick off his career with the Oilers, Roloson settled found his groove and gave Edmonton the goaltending that they badly needed. Starting with that huge win in Minnesota, Roloson posted a .912 save percentage the rest of the way, helping the Oilers secure the eighth and final playoff spot in the Western Conference.
When the playoffs started, Roloson reached another level.
He posted a .929 save percentage in Edmonton’s shocking first-round series win over the Detroit Red Wings, a team that cleared the Oilers by 29 points in the regular season standings. In the second round, the San Jose Sharks jumped out to a 2-0 series lead, but then Roloson slammed the door and stopped 99 of 107 shots as the Oilers won four in a row to take the series in six games. The Oilers then breezed by the Mighty Ducks of Anaheim in the Western Conference Final, highlighted by Roloson’s .934 save percentage in the series.
The save that always stands out to me from this playoff run is the one that Roloson made on Rocket Richard Trophy winner Jonathan Cheechoo in overtime in Game 3, a must-win game for the Oilers…
Roloson’s playoffs came to an end during Game 1 of the Stanley Cup Final when he went down with a knee injury. The Carolina Hurricanes wound up winning the series in seven games to capture the franchise’s first-ever Stanley Cup.
If there was any anxiety that the Oilers had given up a premium draft choice for a rental, that was all cleared up when the Oilers and Roloson agreed to a three-year, $11 million contract in the off-season.
The Wild ended up moving Edmonton’s first-round pick along with Patrick O’Sullivan to the Los Angeles Kings in exchange for Pavol Demitra. The Kings used that pick to select Trevor Lewis, who was a part of both of their Stanley Cup-winning teams in 2012 and 2014. In 2009, the Oilers acquired O’Sullivan from L.A. in a three-team trade that sent Justin “Mr. Game 7” Williams to the Kings.
Roloson had a solid tenure with the Oilers over the course of that contract, as he posted a .909 save percentage over 174 games between 2006-07 and 2008-09, but the team wasn’t able to make their way back into the playoffs.
In the summer of 2009, the Oilers decided they didn’t want to give a 40-year-old goaltender multiple years on a contract, so Roloson left and signed with the New York Islanders. The Oilers replaced him with Nikolai Khabibulin, who inked a four-year, $27 million contract. 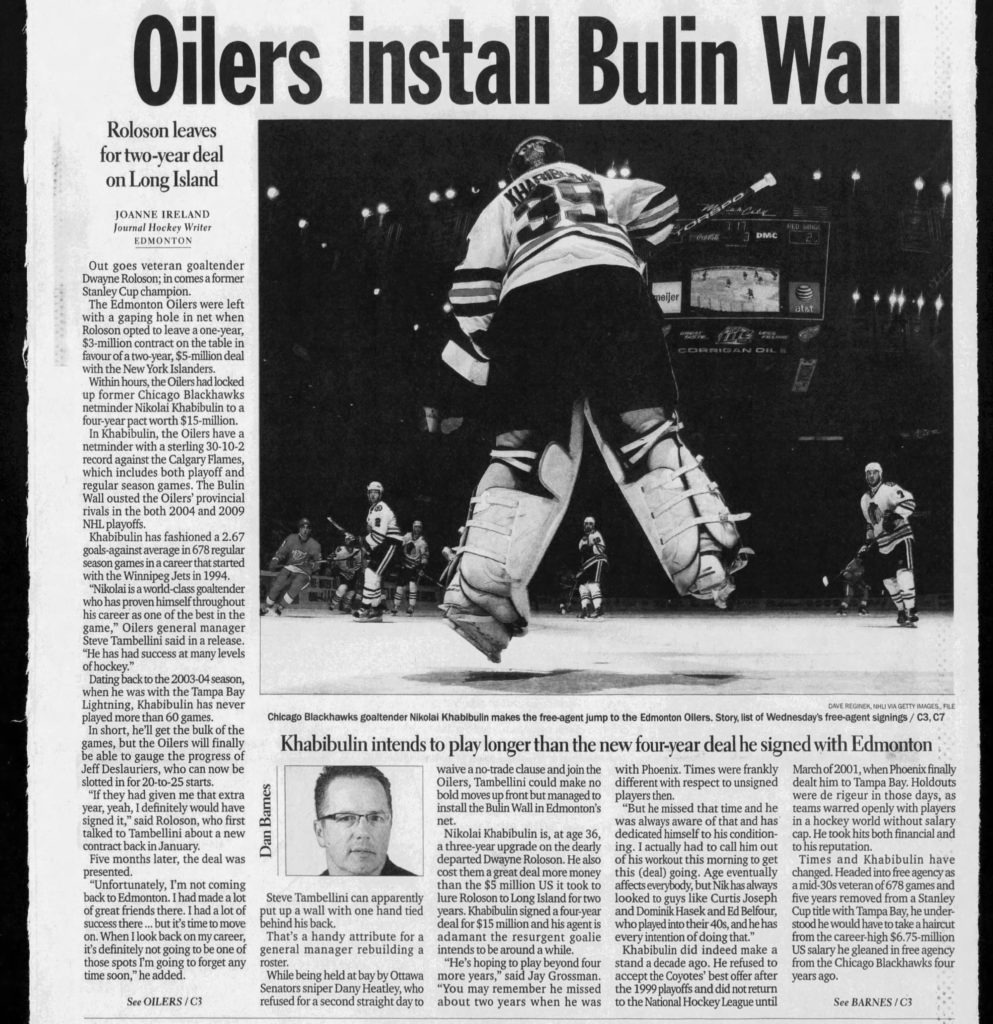 Trading away a first-round draft pick in order to plug up the team’s biggest weakness nearly put the Oilers over the top back in 2006.
Since the Roloson trade, the Oilers have held on tight to their first-round picks. Outside of trading down inside the first round, the only instance in which the Oilers have moved their first-round pick since 2006 was when they gave their top three picks to the Ducks as compensation for signing Dustin Penner, but they already had another first-round pick in that year’s draft from the Chris Pronger trade as a backup.
Of course, many of the seasons since 2006 were spent rebuilding and there haven’t been many opportunities to go all-in, but both Peter Chiarelli and Ken Holland opted not to use the team’s first-round pick to make mid-season upgrades in years in which the Oilers were contending.
Might this year be the year that trend is broken? Are the Oilers close enough for such a deal to push them over the top?
Featured
Oilers Talk
Recent articles from Cam Lewis