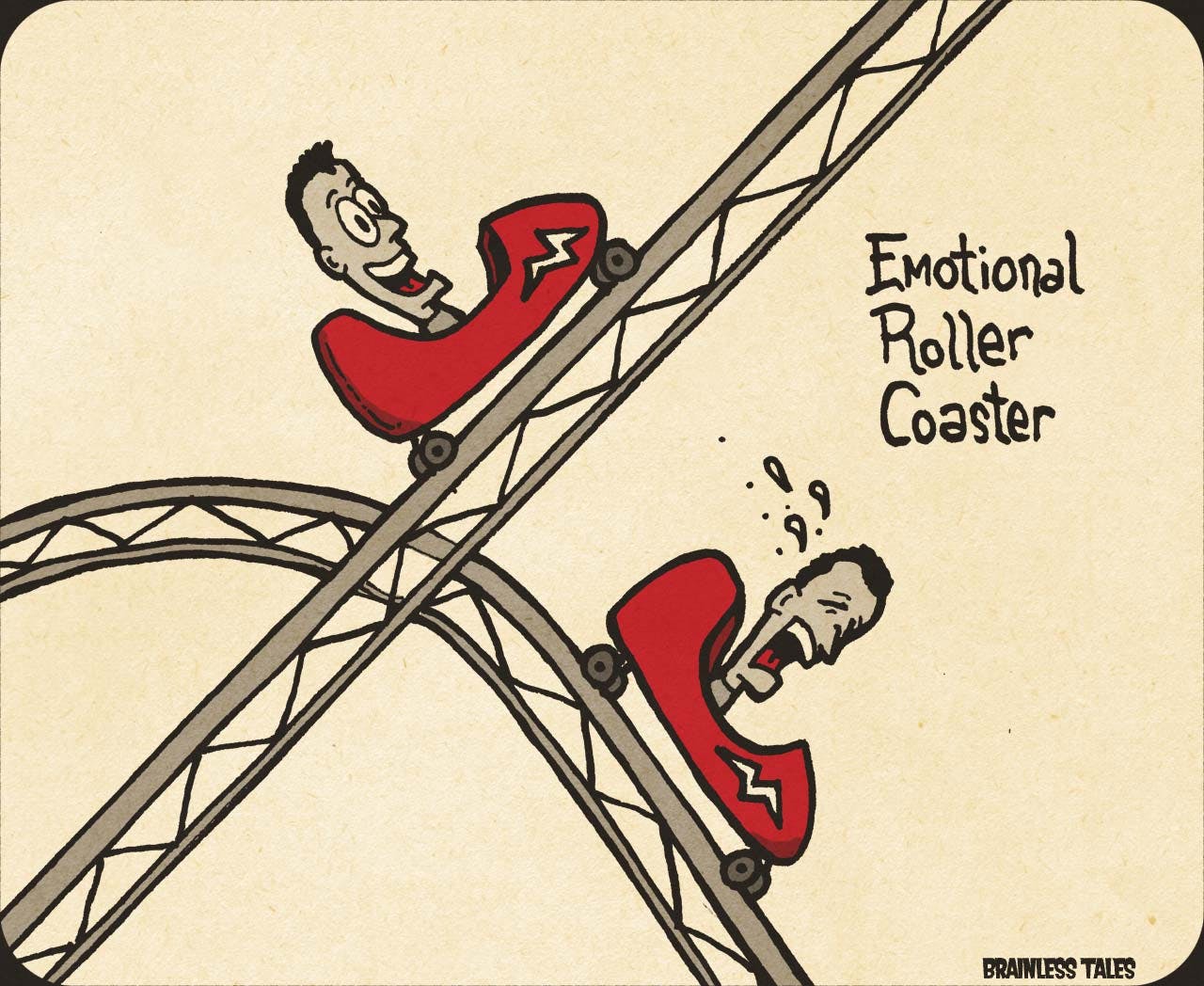 By Jason Gregor
9 months ago
This picture accurately depicts the first half of the Edmonton Oilers season.
Yes, sticklers, I’m aware they’ve played 42 games, so technically they have started the second half, but splitting the first half into 21-game sequences allows for a more accurate comparison, so indulge me and let’s just call it the first half.
The Oilers had vastly different 21-game sequences. It was like they were riding the Mind Bender rollercoaster at West Edmonton Mall. A euphoric climb to the top filled with smiles and anticipation, and then suddenly they were careening down the track, did a few loops that made the players, coaches, and fans queasy, and just when it looked like they would completely derail, they managed to keep it on the rails and finish in a comfortably glide into the departure area for the All-Star break.
The first 21 games were mainly positive. They just kept winning and after 21 games found themselves with the best points% (.762) in the NHL with a record of 16-5. They weren’t going to play that well all season, but to go 2-11-2 in their next 15 games was a major disappointment. They finished 5-0-1 to salvage the second quarter of the season and are in a playoff position (based on points%) when they resume play after the All-Star break.
Here is a quick look comparing the two 21-game sequences.
They actually played better offensively in the most recent 21-game stretch, but they couldn’t score. The seven-goal outburst against Montreal last Saturday made the 5×5 goal scoring look better than it was for much of this stretch. They need to improve defensively. They allowed 2.28 goals/game at 5×5 in the first 21 games and improved slightly to 2.23/game in their second quarter of the season. Goals against 5×5 is still an issue. They need to manage the puck better. They still struggle with major errors that lead to goals against.
And offensively many of their top players saw significant dips in scoring. We will look at the individual 5×5 play tomorrow.

What crushed the Oilers in the second quarter was their horrendous special teams play. They were awful.
In the first quarter, the Oilers were a combined 124.6% on the PP and PK. Best in the NHL.
In the second quarter, they were a dreadful 85.3%. That was 31st in the NHL. Only Columbus was worse at 84.4% and that was mainly due to their power play at 7.8%.
They scored 13 more PP goals in the first quarter and most of those were from Leon Draisaitl and Connor McDavid.
In the first 21 games, Draisaitl had 24.7 shots/60 and McDavid was at 20.6. Draisaitl had 10 goals and McDavid had five. But since then both have shot less and the PP success has dipped. In the past 21 games, Draisaitl has three goals and 17.66 shots/60, while McDavid has one goal and 16.11 shots/60. Ryan Nugent-Hopkins and Tyson Barrie were out at different times during the second quarter, so that played a small role, but the Oilers PP runs through their big guns, and when they are firing shots the power play has more success.
I’d expect the power play to return to the form. Since the start of the 2019/2020 season up until game 21 of this season the Oilers PP (over 148 games) was 29.7%. They were lethal for a long time, and I’d be surprised if the past 21 games turns out to be anything more than a bump in the road. However, they will need to improve their work ethic on the man advantage, and Dave Tippett could look at starting the second unit if any of his big guns are at the end of a long shift when a penalty is called. Starting the power play fatigued diminishes your chances of success.
The penalty kill was utterly atrocious in the second quarter.
They took fewer penalties in the second quarter, but allowed 2.5 times more goals. It was ugly. They allowed a power play goal in 15 of the 21 games, after only allowing one in seven of the first 21 games.
Here are some numbers for the first 21 games.
Hyman, RNH, Ryan, and Yamamoto were the four main killers. Sceviour was the fifth killer and replaced Ryan for the three games he missed. They were solid overall.
Now look at games  #22-42.
Injuries played a factor as Nugent-Hopkins missed seven games and Zack Hyman missed six, and the Ryan/Sceviour combo struggled as they were on the ice for 11 and 10 goals respectively. Even RNH and Hyman saw their GA/60 jump up during these last 21 games, albeit it not by a lot. The PK unit really struggled. The PK was a league-worst 66.1% over the past two months and that must improve when the second half of the season starts next Tuesday.
Here is how the D-men were deployed.
Nurse and Bouchard started most power plays, and then came out for a second shift as the Oilers didn’t allow many goals. They used the same four D-men for most of it and Kris Russell filled in for Nurse when he missed five games.
Same main four penalty killers on the blue line, although they did combine to miss 11 games, but the PK wasn’t noticeably worse in those games. A few things I noticed: Bouchard and Nurse’s high danger chances against were actually lower in the second quarter, despite allowing way more goals. But Keith/Ceci saw a big jump in the high danger chances allowed.
What is interesting is in the first quarter the Oilers were 49-71 (40.8%) in the face off dot on the PK.
In the second quarter they were 45-60 (42.8%). There were fewer face offs due to more goals. So the drop off wasn’t solely due to losing draws. Ryan and Sceviour were a combined 19-21 on the dot.
There was some bad luck, with deflections off of legs into the net, and a few off sticks that went directly to the opposition, but I found the Oilers allowed too many seam passes in the second quarter. Their four penalty killers got spread out too much, which we didn’t see as often in the first quarter.
If I’m the coaches I’m spending more time focusing on improving the PK than the PP. I’d be more confident the power play will sort itself out. 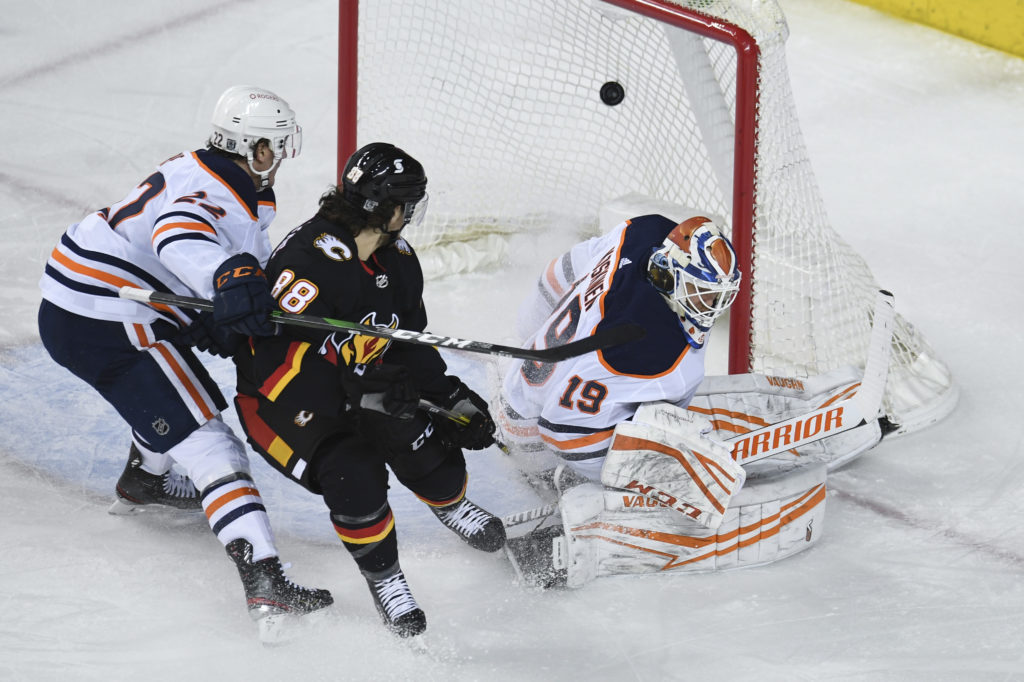 Feb 6, 2021; Calgary, Alberta, CAN; Edmonton Oilers goalie Mikko Koskinen (19) is scored on by Calgary Flames forward Mikael Backlund (not pictured) during the second period at Scotiabank Saddledome.
The most glaring weakness on the team was their inability to score first. They scored the first goal of the game a league-low 12 times. They are the only team in the NHL undefeated when scoring first, but they don’t score first often enough. The challenge with their lack of first goals, is that there isn’t one solution. It is a combination of not burying their chances, allowing soft goals, taking a penalty early in the game, not capitalizing on their first PP of the game and too often feeling their way into games and not setting the tone.
The good news is that it is highly improbable they will allow the first goal in 71.4% of their remaining games. Even if they only score first in half their games (17 teams have thus far), then the Oilers’ odds of winning will increase significantly. Teams scoring first have won 67.6% of the time (481 of 711 games).
Fifteen of the top 17 teams (in pts%) have a winning% above .650 when scoring first. Only St. Louis (.500) and Washington (.613) are below that. And 11 of those top teams have a W% of .773% or more when scoring first. The Oilers will make life much easier on themselves if they start scoring first more regularly.
Another area that needs improvement is the forwards need to realize they can’t rely solely on scoring off the rush. Edmonton is great at that, and I’m not saying they should stop, but they need more goals from around the net. They should watch Evander Kane. He has two deflection goals in three games. Just taking a lane to the net can lead to fortuitous bounces, or a nice deflection like he had on Wednesday in Washington. As the games tighten up down the stretch the Oilers need more hard working, crash-the-net type of goals.
The Oilers wasted a great start and sit 16th in points%. I’d say they’ve underachieved thus far. The recent 5-0-1 streak salvaged a brutal second quarter, but the Oilers will need to improve many facets of their game if they want to have home ice advantage in the first round of the playoffs.