By Robin Brownlee
2 months ago
There’s an old axiom that tells us “The devil is in the details.” It’s more than fitting, then, the red-hot New Jersey Devils provided the Edmonton Oilers a first-hand reminder of that with a franchise record 13th straight win in a 5-2 waltz Monday. Yes, 13 straight wins, as in 1-3.
While the Oilers have looked pretty good at times this season, like in a 4-3 OT win over the Vegas Golden Knights at home Saturday, “pretty good at times” doesn’t get it done against a team as married to consistency as the Devils appear to be. Coach Lindy Ruff knows exactly what to expect from his team game-in and game-out. The same cannot be said for Oilers’ coach Jay Woodcroft.
Too often last night, the Oilers looked incapable of handling the Devils speed on the rush. Is that a scheme problem or a personnel problem? Stuart Skinner, who started off so stingy this season, has fallen off a bit of late. Skinner coughed up the puck on the 2-1 goal by Dawson Mercer and appeared to lose his footing in the crease on the 3-1 goal by Damon Severson.
Details matter when it’s such a fine line between winning and losing. After winning five straight games Oct. 24-Nov. 1, the Oilers have been on the wrong side of that line too often. They’re 10-9-0, including 4-6-0 in their last 10 games as they hit the quarter-mark of the season against the New York Islanders Wednesday. 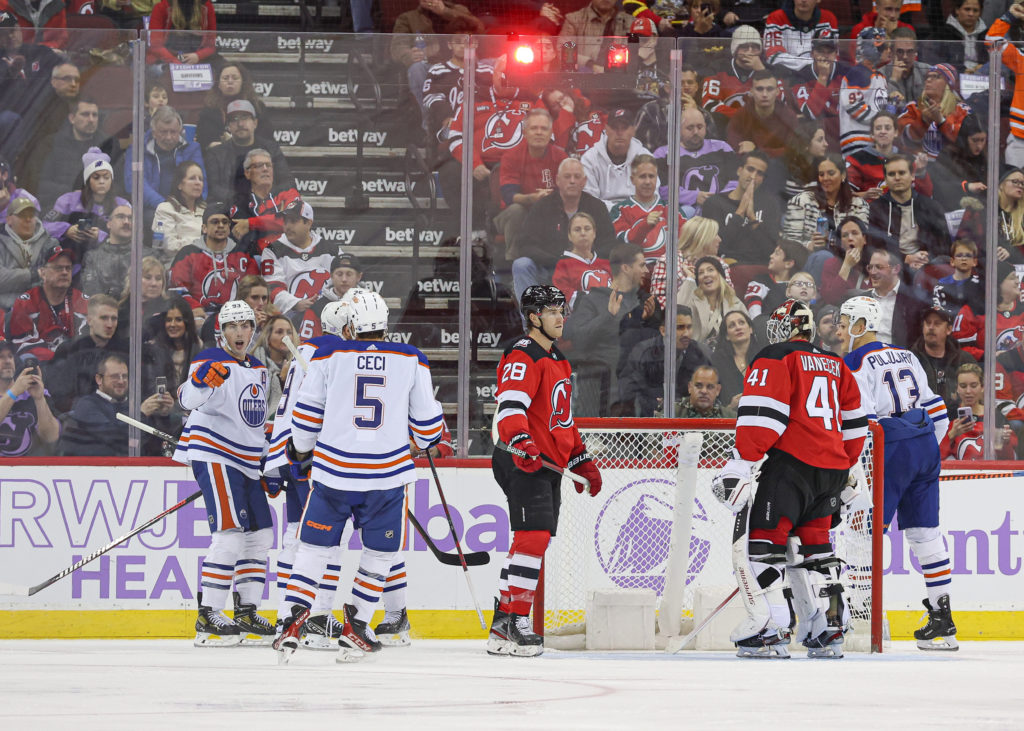 Nov 21, 2022; Newark, New Jersey, USA; Edmonton Oilers center Ryan Nugent-Hopkins (93) celebrates his goal with teammates during the third period in front of New Jersey Devils goaltender Vitek Vanecek (41) and defenseman Damon Severson (28) at Prudential Center. Mandatory Credit: Vincent Carchietta-USA TODAY Sports
“When you play a team that’s on the roll that they’re on, they make you pay for those individual errors,” Woodcroft said, “We were made to pay tonight on some of our mistakes. We’ve been faced with stiff challenges in the teams that we’re playing, but in order to build consistency in your game, you want to see certain things in your team every night.
“You play a team that’s at the level they’re at right now, you can’t make those errors. You want to make sure that the other team beats you, not you beating yourself. Tonight, I thought we made too many self-inflicted errors.”
Skinner today sits with a .921 save percentage and 2.78 GAA through 10 appearances, but he’s 4-5-0. It’s not like Skinner has hit the ditch, but it wasn’t exactly a night to remember with his fumble on the 2-1 goal. Against a team as good as the Devils, even a little slip is often the difference when your team defence is as marginal as the Oilers has been too often.
“It was obviously a tough game, a tough loss,” Skinner said. “They’re obviously a great team. They’re hot right now as well. They’ve got some great players that make some great plays, and that was just tough to lose — especially two in a row to these guys. All we can do is learn from our mistakes and move on.”

With the Oilers sideways right now, there’s plenty of buzz on the call-in shows about the need for GM Ken Holland to make some personnel changes, most notably the need to add a bonafide top-four blueliner on the left side. That’s fair comment when the team is running in place as it has been for weeks. The loss of Evander Kane has played into this recent dip as well – the Oilers can score enough without him, but they miss his edge.
If Woodcroft can’t coax an uptick in consistency and attention to detail from his roster in a hurry, it’ll fall to Holland to make some changes. Some of you are convinced the time for that is here right now. With each passing day, I’m finding it difficult to come up with a compelling argument that you’re wrong.
Editorials
Featured
Oilers Talk
Recent articles from Robin Brownlee