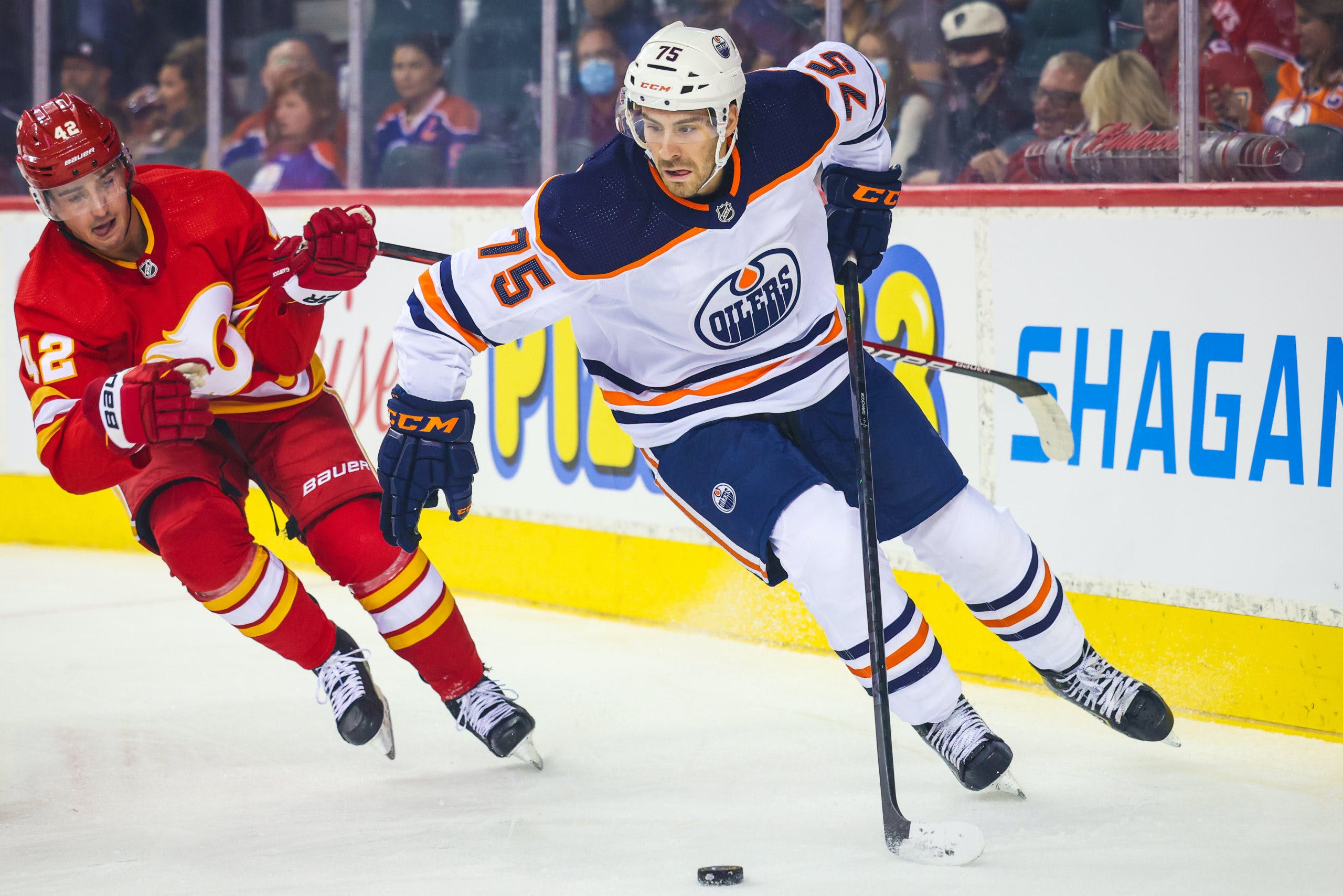 By Jason Gregor
6 months ago
The Edmonton Oilers have a salary cap crunch. Currently, they have 11 forwards, seven D-men and two goalies on the roster that add up to $74,926,000 in cap space. Add in $4,166,667 in dead cap space from Milan Lucic’s salary retention and buyouts for James Neal and Andrej Sekera, and add $896K for bonus overages from last year (Evan Bouchard hit his four bonuses for a total of $850K and the oilers sit at $79,988,667. I have Mike Smith and Oscar Klefbom starting the season on LTIR, thus their combined $6.367m won’t count against the cap.
The salary cap is $82.5 million so the Oilers have $2,511,333 in cap space (*edited as I didn’t have the bonus overage in initial draft) to add two or three forwards (if they want 23 players) to the roster. Kailer Yamamoto will command a salary very similar to Jesse Puljujarvi’s $3m AAV, and Ryan McLeod will be in the $1m range. I don’t see a scenario where the Oilers can sign both for $2.5m, so Edmonton will be over the cap when those two sign.
General Manager Ken Holland will need to make a trade, and I see many suggesting they should move Tyson Barrie because Evan Bouchard can replace him. This is inaccurate.
Bouchard could replace Barrie’s minutes on the power play, but remember Bouchard is already on the man advantage. In the regular season, Barrie averaged 2:51/game on the PP, while Bouchard was at 1:20.
In the playoffs, Barrie played 3:00/game on the PP, and Bouchard was at 1:50/game. However, if Barrie is traded Bouchard can’t replace the other minutes as he’s already playing a lot. Here are their 5×5 totals from the playoffs.
I keep hearing how Barrie can’t defend, but his play in the playoffs doesn’t match that theory.
The only playoff year Barrie was outscored was with Toronto in 2020. I find it odd how some who disparage Barrie will then strongly promote Jesse Puljujarvi and use his GF%, xGF%, and other stats to show he makes a positive impact. That is fine, but if you like those numbers for Puljujarvi, how come you don’t like them for Barrie? His playoff career numbers are quite strong.
I’m not saying Barrie is a defensive stalwart, but in his career, he has been a positive impact when the games matter more. He elevates his play in the postseason, and the Oilers are entering the phase where playoff performance will matter more. Unless they are ravaged by injuries, the Oilers are a lock to be a playoff team next season.
I’m not saying Barrie isn’t replaceable. Most players are and the makeup of the Oilers’ defence core does need to change. I’d understand if they trade Barrie as I’d like to see some more physical size in their second and third pairings. Brett Kulak, Philip Broberg, Bouchard and Barrie have similar styles and skill sets. Kulak and Broberg are great skaters, while Barrie and Bouchard move the puck very well. But all of them are under 200 pounds, and skilled, physical size matters in the playoffs, especially on your blueline. I think the Oilers need to add a different dimension to their blue line, but it might not happen until the trade deadline, and I expect Markus Niemelainen to get some games in. He’s a banger and has a very different dimension, but he’s also a rookie. Will they want two rookies on the blue line in the playoffs? Doubtful. 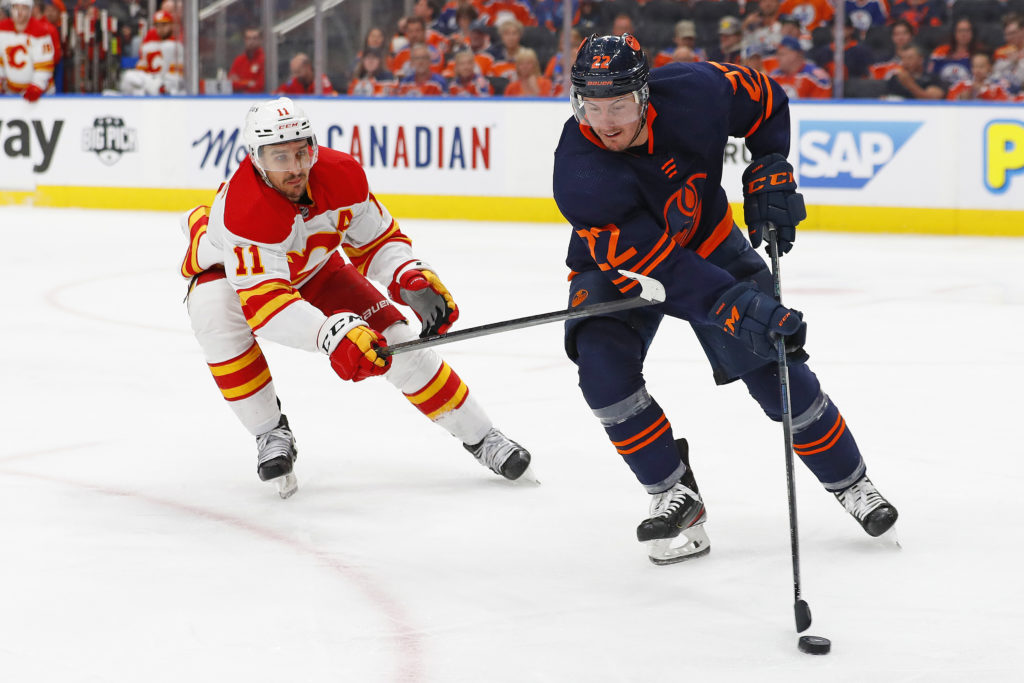 May 24, 2022; Edmonton, Alberta, CAN;Edmonton Oilers defensemen Tyson Barrie (22) moves the puck in front of Calgary Flames forward Michael Backlund (11) during the second period in game four of the second round of the 2022 Stanley Cup Playoffs at Rogers Place. Mandatory Credit: Perry Nelson-USA TODAY Sports
Barrie has value, so he is a tradeable asset, but suggestions the Oilers should just dump him to free up cap space is highly narrow minded, and frankly very misguided. The Oilers have very little RD depth in the organization. Vincent Desharnais, Phil Kemp and Michael Kesselring are the other RD. None have NHL experience. So if you move Barrie there is no internal replacement for him. It would have to come via a trade or a free agent signing.
The free agent crop for RD includes PK Subban, Anton Stralman, Micheal Stone, Greg Pateryn, Alex Biega and Paul Ladue. I didn’t include John Klingberg because he will command a huge salary that Edmonton can’t afford. There are only two plausible options.
Stralman turns 36 next month and his best years are behind him. Subban is 33, but in New Jersey he played more of a second pair, high-end third pair D-man role. You can see who he played against here via PuckIQ, and he faced bottom line players the most. He is the only UFA RD option the Oilers could even consider. But is he as good as Barrie? Edmonton can’t afford to downgrade on defence. If anything they should add another depth RD now, just in case of injury.
If Edmonton trades Barrie, they need a quality replacement. Barrie was a much better contributor than his online detractors suggest. Bouchard could essentially take an extra 60-90 seconds per game on the PP, but he can’t replace Barrie’s 5×5 minutes. Bouchard could slot in on the power play, but Glen Gulutzan was quick to point out the Oilers’ power play doesn’t need a huge bomb from the point.
“The one thing, the narrative that I found here, and this now includes critics of Tyson Barrie, is we need a right shot bomb from the point,” said Gulutzan. “Tyson gives us a great shot at the point, but the defenceman’s job is to put the puck into 97 or 29’s hands, or 93’s hands in a good spot. He’s a distributor, he’s a facilitator of the power play and it’s probably the most important job because if he doesn’t get it to them at the right spots, you’ll see a lot of stalls and slowdowns on the power play.
“Tyson is underrated in that capacity. He can shoot the puck, he’s dynamic, he can move the puck. And his decision making when he’s giving it to Leon, or Connor or Nuge, he’s making it in the right spot. He’s done a really good job over the last couple of years so he’s underrated certainly in that capacity,” said Gulutzan.
I’d be cautious to assume Bouchard will just slide in on the top unit and automatically be as good of a distributor as Barrie. It isn’t as easy of a job as some believe. Barrie is an elite passer and is very good at moving laterally across the blueline to keep the flow going on the man advantage. I think Bouchard would be fine, but it isn’t a lock he’d be as good right away. 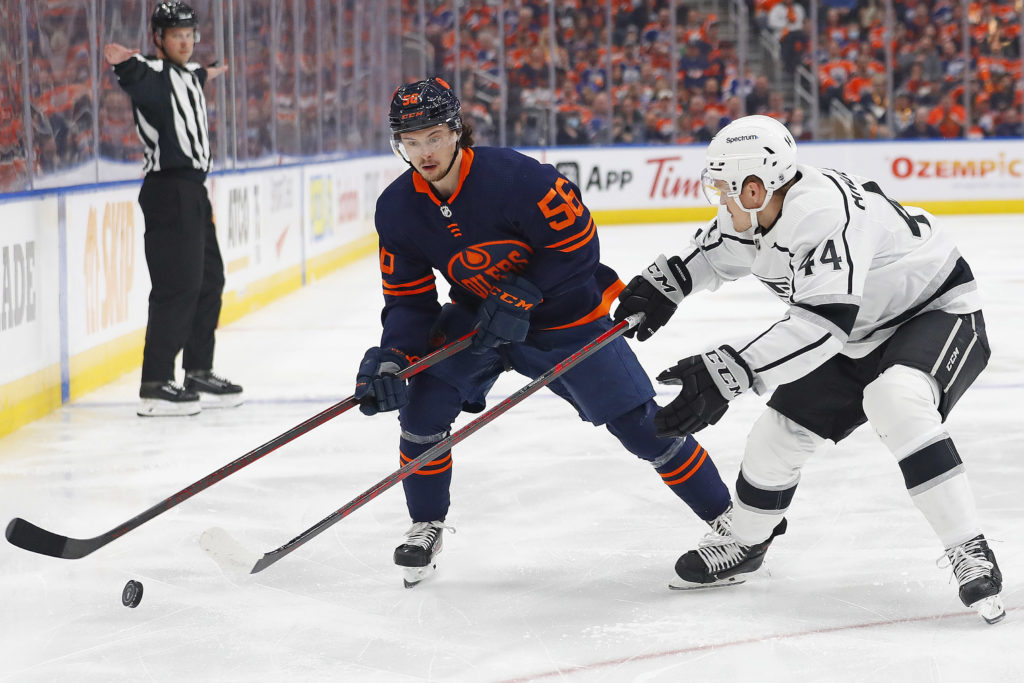 May 4, 2022; Edmonton, Alberta, CAN; Edmonton Oilers forward Kailer Yamamoto (56) tries to carry the puck around Los Angeles Kings defensemen Mikey Anderson (44) during the first period in game two of the first round of the 2022 Stanley Cup Playoffs at Rogers Place. Mandatory Credit: Perry Nelson-USA TODAY Sports
Offensive production is Edmonton’s biggest strength with Connor McDavid, Leon Draisaitl, Evander Kane, Zach Hyman, and Ryan Nugent-Hopkins as their top-five forwards, and all are under contract for at least three seasons. One of Yamamoto or Puljujarvi will be the other top-six winger. They also have McLeod, Warren Foegele and young Dylan Holloway as options in the top nine.
I’m on record as saying trading Puljujarvi away solely for a draft pick isn’t ideal. If they do, then they need to use the cap space to sign a UFA winger, and the trade would essentially be the new player and the pick for Puljujarvi. For me, dealing a winger (doesn’t have to be Puljujarvi) makes more sense than moving out Barrie, due to the lack of depth on RD, unless you can acquire a solid RD for Barrie.
Trading Barrie could work out, but not as a salary dump, and trading him should not include the phrase “Bouchard can replace him.” Both played 18 minutes in the playoffs last year. If Barrie is moved Edmonton will need to acquire or sign another RD, and he needs to be someone who can play as well as Barrie did last season.
I find some people have undervalued the impact Barrie had on a team that went to the third round. A cheaper option doesn’t mean the team will be better. Edmonton needs to improve the team, not take a step back in talent.