Advertisement
Ad
Kane Signing Could Be Huge Win For Edmonton 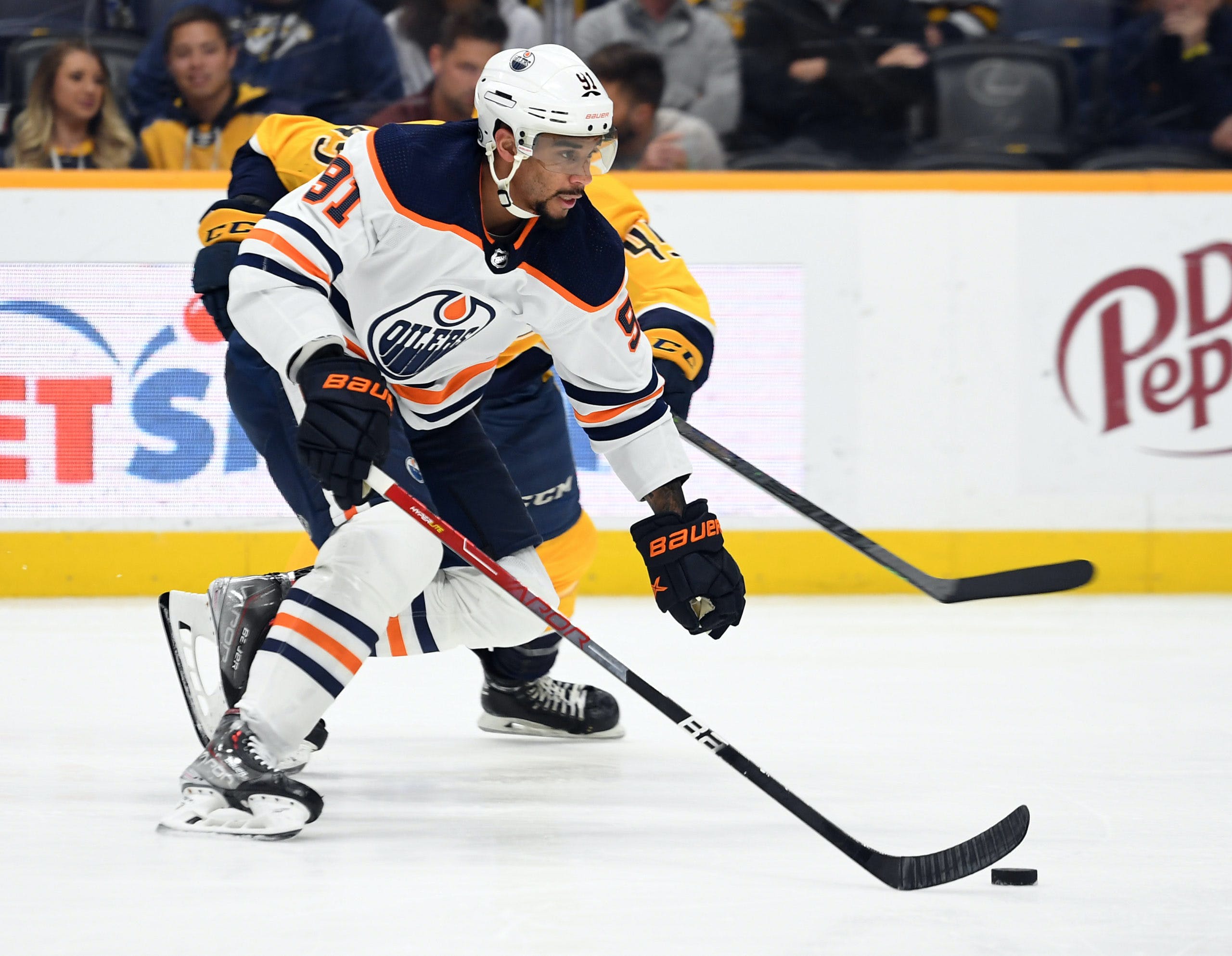 Photo credit: © Christopher Hanewinckel-USA TODAY Sports
By Jason Gregor
4 months ago
Comments
The Edmonton Oilers needed Evander Kane’s rugged skill and Kane needed the opportunity to play with the NHL’s two best offensive players. Late last night Kane announced on his social media feeds he’d signed a four-year extension with the Edmonton Oilers. The deal carries a $5.125m AAV, which could be very team friendly if Kane produces how many expect him to.
Oilers General Manager Ken Holland gave Kane’s camp permission to speak with other teams on Monday. It was a brilliant move as it allowed Kane to see there weren’t any significantly better offers out there. I still think teams were leery of term, which is what Kane was looking for, and ultimately Kane realized Edmonton offers him the best chance to sign another solid deal when he is 34. Kane has always been in great shape, he is an elite skater and there is very good chance he will still be a solid contributor when his four-year contract expires.
Advertisement
Ad
Advertisement
Ad
The Oilers gave Kane an extra year. That was part of the negotiation, as originally Edmonton was hoping to keep it to three years. Kane didn’t get a long-term deal on the open market because teams are still a bit leery of a repeat of what happened in Winnipeg and San Jose. In both cases teammates tired of his act, but maybe Kane has matured. He is a father of two children now, and we all know people who started making better decisions when they became parents. Not all do, but many of us made better choices (at least more regularly) after becoming fathers. Kane could join that group.
Time will tell, but today this deal works well for both sides. Kane gets $20.5m and the Oilers get a solid AAV. Valeri Nichushkin has $6.125m for eight years, while Rickard Rakell has $5m for six years. Kane’s deal is much better than both of those and by the end of today, I sense many other UFAs will have higher AAVs than Kane. His history played a role, but this deal has potential to be very team friendly.
Advertisement
Ad
Advertisement
Ad
The only wrinkle in this deal is Kane’s pending arbitration hearing. There is no set date, yet, but there are three outcomes. Two will be good for Edmonton, while one would void his deal with the Oilers. Here are the scenarios.
One: Kane loses his appeal. His current deal with the Oilers remains in tact.
Two: The Sharks and Kane reach a settlement and the case is over. He remains with Edmonton.
Three: Kane wins his appeal. His deal with the Oilers would dissolve and Kane becomes Sharks property. His contract with SJ includes a NTC, where he could submit a list of three teams he’d be willing to be traded to. I’d guess he’d want to come to Edmonton and they’d have to work out a trade, but then Kane’s AAV would be $7m over three years instead of $5.125m over four.
Advertisement
Ad
Advertisement
Ad
The NHL is worried about the third possibility. It won’t look good for the league. Maybe a settlement is reached, but Kane’s camp has been steadfast from the beginning there were no grounds for termination. We’ll see where this goes.

May 31, 2022; Denver, Colorado, USA; Edmonton Oilers left wing Evander Kane (91) celebrates his first period goal with right wing Kailer Yamamoto (56) and center Ryan Nugent-Hopkins (93) against the Colorado Avalanche in game one of the Western Conference Final of the 2022 Stanley Cup Playoffs at Ball Arena. Mandatory Credit: Ron Chenoy-USA TODAY Sports
Kane is the Oilers’ third best forward and he re-signing him is a huge win for Edmonton. He doesn’t have to score at a 22-goal, 39-point pace in 43 games to be a solid deal. Although he looks to be a lock to score 35 goals riding shotgun with McDavid.
It wasn’t just points that Kane added to the team. He added an edge and a toughness the team desperately lacked. He eliminated Matthew Tkachuk in the Oilers’ second-round playoff win over Calgary. He’s willing to fight any player in the NHL, and because he’s skilled enough to play with McDavid, he has a better chance to deter teams from taking liberties on McDavid. I’ve long argued it is much easier for tough players to play the role of protector when they are actually on the ice with the player you want protected. Kane can react right away if he sees something he doesn’t like, rather than yell from the bench.
Advertisement
Ad
Advertisement
Ad
Kane can kill penalties, play the powerplay, and score at 5×5. And his aggressive, physical style of play is something the Oilers desperately needed. There was no other UFA winger who possessed the same on-ice attributes as Kane.
This deal means the Oilers’ top-six won’t be taking a step back. They are returning their top-five forwards from last season, and Holland has lots of money to re-sign Kailer Yamamoto, Jesse Puljujarvi, and Ryan McLeod. He can also sign Jack Campbell for $5m and has room to add Brett Kulak, or another LD, for $3m.
By my calculations, the Kane signing leaves Edmonton with $15.437m to sign players. That includes Dylan Holloway, Philip Broberg, Devin Shore, and Derek Ryan on the roster, as well as placing Mike Smith and Oscar Klefbom on LTIR.
Advertisement
Ad
Advertisement
Ad
The Oilers will still be tight against the cap, but they have space to add Campbell, a LD, re-sign their three RFA forwards, add one or two more depth forwards (not a lock Shore/Ryan are on opening night roster) and they need a #3 goalie.
Kane’s $5.125m AAV should be viewed as a win as long as he remains a positive influence on the team.