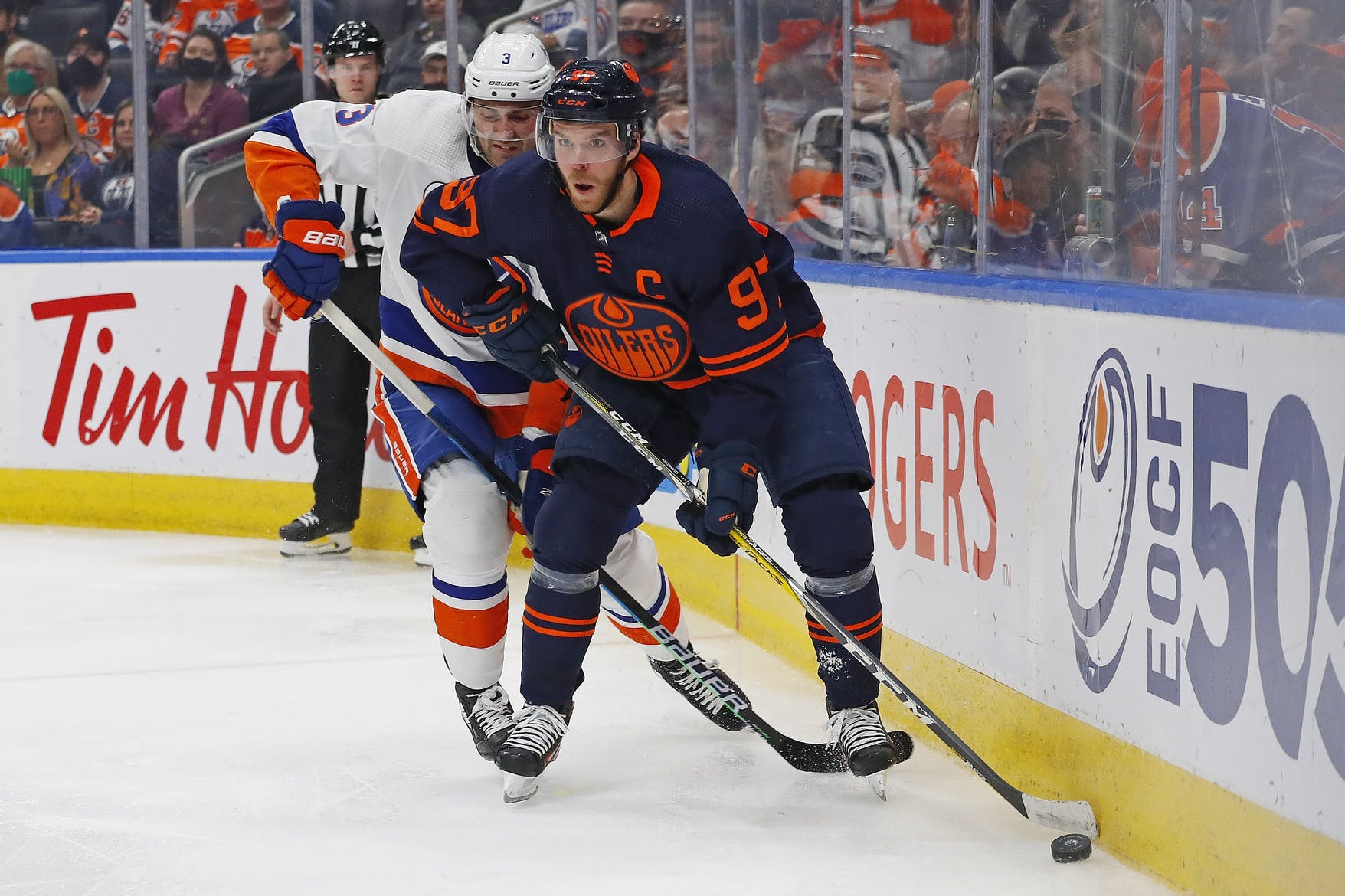 By Jason Gregor
2 months ago
Welcome to our game day content presented by NHL betting site Betway!
Let me preface this by saying I’ve been guilty of it many times too, but the focus heading into tonight’s game shouldn’t be on the line combinations. Jay Woodcroft unveiled new lines at practice yesterday, but they are meaningless if the Oilers don’t address their biggest weakness.
And that is defending and reducing their goals against at 5×5. The Oilers are 26th in the NHL allowing 2.26 goals/game at 5×5. That is awful. And the breakdowns have been a complete team effort. Goaltenders, defencemen, and forwards have all played a role in the Oilers returning to being ghastly defensively.
Last year under Jay Woodcroft the Oilers averaged 1.92 GA/GP at 5×5. That was 10th best over the 38-game stretch. If you want to be a contending team your team’s 5×5 GA/game has to be around 1.90, and often lower.
Edmonton isn’t close to that right now, and until it changes, it will be difficult to win consistently. They’ve shown they can play well. They did v. Vegas, and their first period v. New Jersey was strong, but then they reverted back to gifting goals.
I don’t see it as a systemic issue, instead, it is about effort and execution. Playing well defensively is hard. It takes commitment to do the hard things. Getting in shooting lanes, blocking shots, battling along the boards and in front of the net, having good positioning and proper gaps. And you have to do it with confidence. Hesitating, backing in too deep, and playing scared only increase your odds of getting beat.

Foegele-McDavid-Hyman
RNH-Draisaitl-Puljujarvi
Janmark-McLeod-Kostin
Holloway-Malone-Ryan
Nurse-Ceci
Kulak-Bouchard
Murray-Barrie
Campbell
Woodcroft juggled the top lines, and he’s hoping it works, but offence isn’t the main issue right now. They need to be sound defensively. If they take care of their own end, the offence should take care of itself. The Islanders have an unreal goalie in Ilya Sorokin, but their defensive play has actually been worse than the Oilers. They’ve given up more quality chances than the Oilers according to SportLogiq. See pic below.
Right now, we don’t know whether it will be Campbell or Skinner in net for the Oilers as Jay Woodcroft didn’t give any indication after the morning skate. If Campbell is healthy enough to go after breaking his nose on Monday night, it will likely be his first start since the 7-2 loss to Carolina. If not, Skinner will get his fifth straight start but we’ll have to wait until closer to puck drop.

Lee-Barzal-Wahlstrom
Bailey-Nelson-Beauvillier
Parise-Pageau-Palmieri
Martin-Cizikas-Clutterbuck
Pelech-Pulock
Romanov-Mayfield
Aho-Dobson
Sorokin
What is interesting about the Islanders is they haven’t been great defensively. They play passively in the D-zone, which should favour the Oilers. Usually, McDavid and Draisaitl feast on teams who play a passive D-zone coverage instead of a pressure game. Give them more time and space and they will exploit you. We’ll see if that happens tonight. 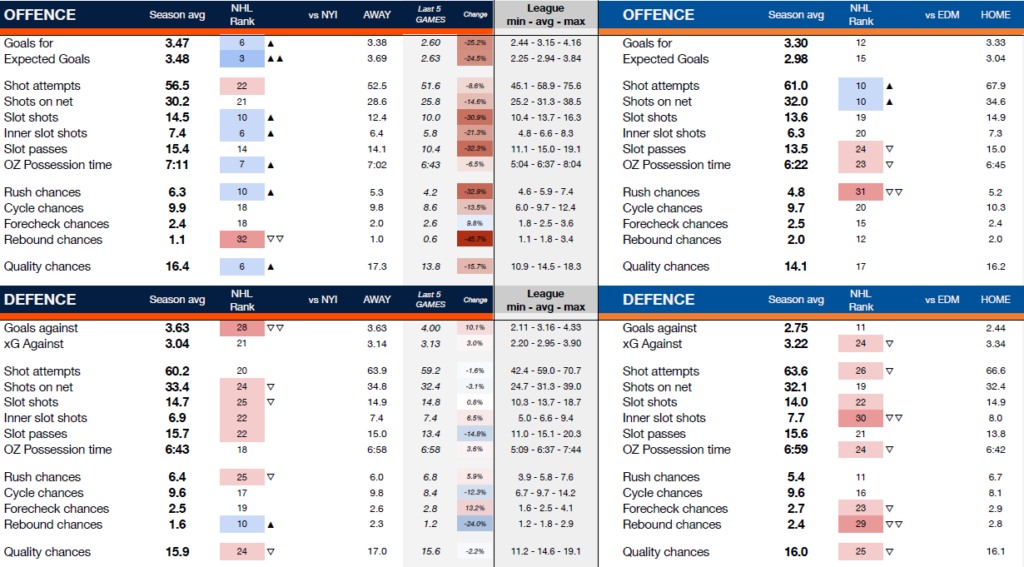 Ilya Sorokin has been excellent in goal, and his 0.51 goals above expected is third in the NHL. The Islanders are giving up lots of good looks, but he’s making huge saves to help them win games. The Oilers need to attack the Islanders’ passive D and bury their chances. The Islanders are 30th in slot shots allowed, and Edmonton’s top-two lines need to make them pay when those opportunities arise tonight. 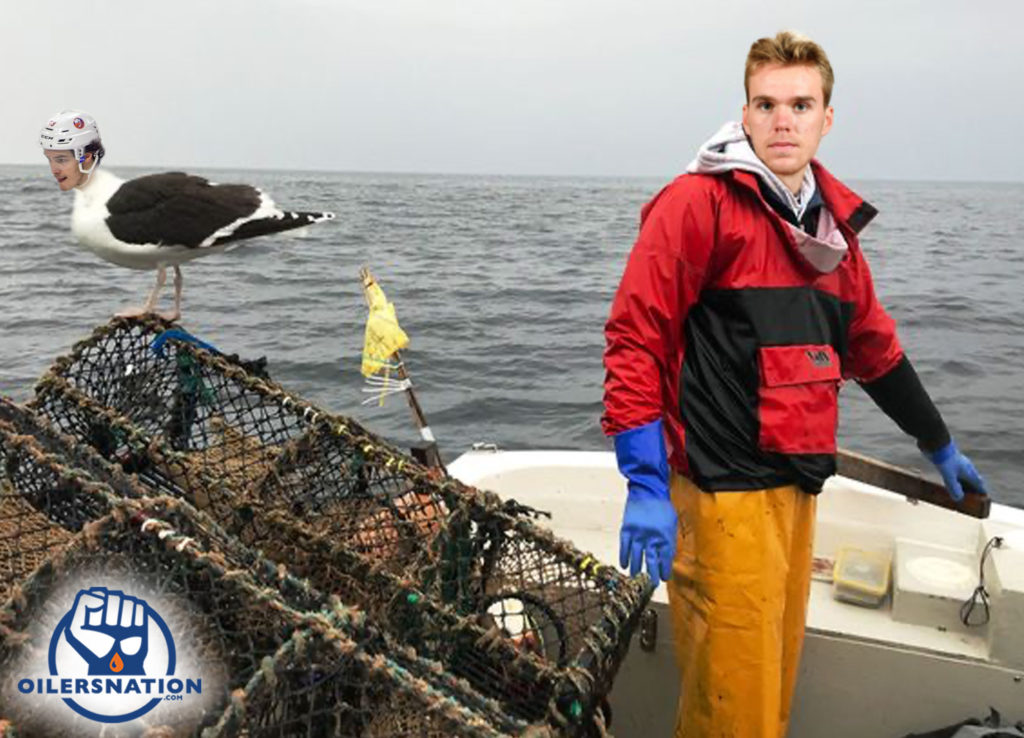