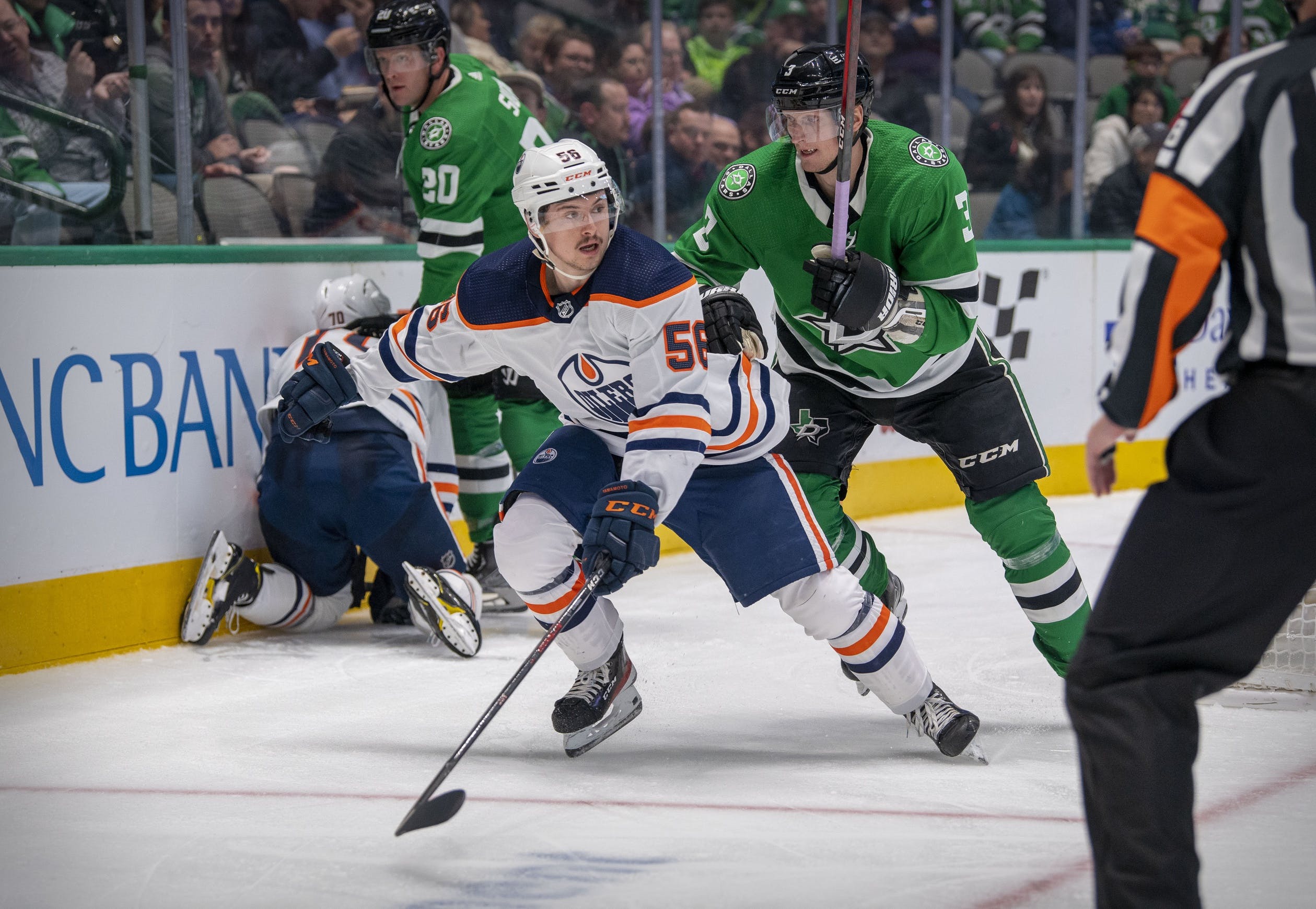 By Jason Gregor
10 months ago
@Mikko Koskinen will likely need to be sharp early in the game tonight while his teammates find their legs. The Oilers/Avalanche game last night was the fastest game the Oilers have played this season. It was incredible to watch. It looked like a playoff game for long stretches. The pace was ferocious. There were big hits and the star players on both teams were front and centre.
But that was last night, and now the Oilers have to refuel and get prepared for a Dallas squad that is one point out of a playoff spot.
— The Stars are one point behind Las Vegas for the second wildcard spot, but they have four games in hand. Dallas is in a good position to grab the final playoff spot in the west, and they should be a desperate team. The Oilers matched the Avalanche’s speed stride-for-stride last night, at 5×5, but the Stars don’t play fast like Colorado. The Avs are one of the best teams creating off the rush, while Dallas is 29th. The Stars are still good at creating chances, ranked 13th, but they don’t do it with blazing speed. It will be a very different style of game tonight.
— The Stars ‘strength is how they defend. They rank in the top six in eight categories including being first in slots shots allowed and second in rebound chances and quality chances. 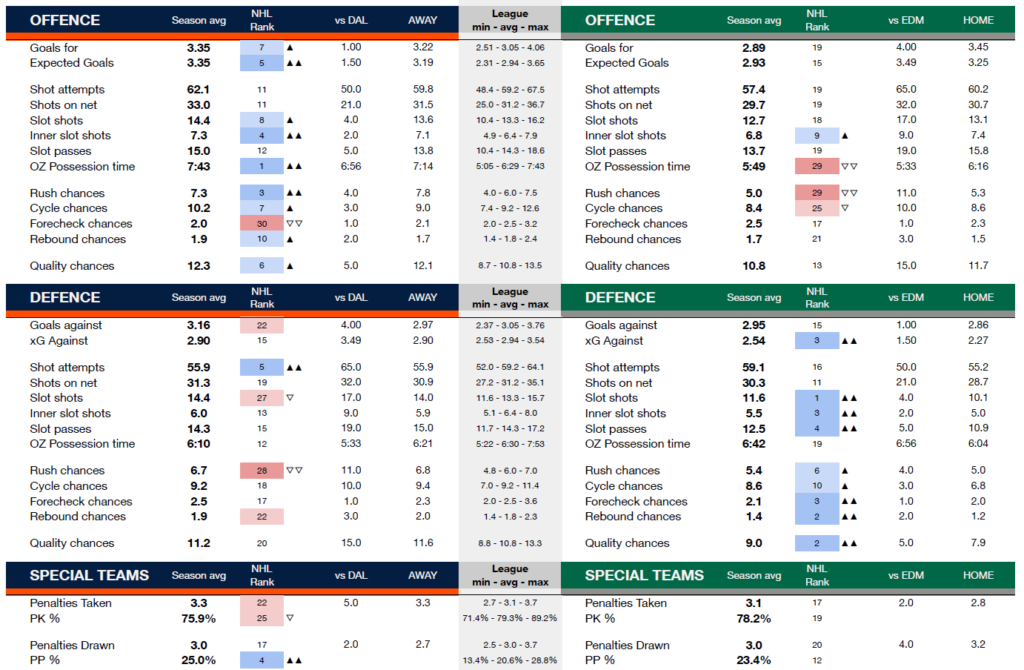 — The Oilers’ defensive game has improved under Woodcroft, and they didn’t allow a 5×5 goal against to Colorado last night, but the Oilers’ offence is still their best asset. They create a lot and the Stars don’t give up much. So it could come down to which team is able to play their style more often.
— I loved @Kailer Yamamoto’s play last night. I know he took three penalties (one was coincidental), but he was involved all over the ice. He scored a goal, had an assist, but most impressive was how dogged he was on the puck. He was physical, he was chirping, and he was around the play all night. The Oilers need a few more wingers to play with the same energy.
— Jay Woodcroft used five forwards for much of the game last night: @Leon Draisaitl (23:21), @Evander Kane (22:37), @Connor McDavid (21:46), @Zach Hyman (21:30) and Yamamoto (20:48). The next highest was @Jesse Puljujarvi at 11:27.
Jared Bednar played four forwards a lot as well: Valeri Nichuskin (24:40), Nathan MacKinnon (24:37), Mikko Rantanen (22:03) and Nazem Kadri (21:52). But then they had Andre Burakovsky (16:00), Alex Newhook (15:29), Nico Sturm (15:27) and JT Compher (15:19).
They only dressed 11 forwards so that played a factor as well, but both teams relied on a smaller group of forwards. The coaches went with guys they felt were more engaged.
— Puljujarvi needs to rediscover the level of involvement he had early in the season. His size, strength and speed should be a major asset. He did miss a month and has only played three games since returning, so maybe he needs a few more games to get up to speed, but it needs to happen soon. He is capable of being more of a factor in games.
— Even though he only played 10 minutes, I liked @Warren Foegele’s game. His speed allowed him to keep pace and be a factor. If I’m Jay Woodcroft I might consider playing Foegele and Puljujarvi with Ryan Nugent-Hopkins when he returns later this week. Ryan McLeod can play with Draisaitl and Hyman. I don’t think McLeod is a lock to stay there, and he and RNH could switch spots at certain times in games, but those look to be the top-nine forwards moving forward in some combination. It is the fastest top-nine and most skilled top-nine the Oilers have had in years. And if one of them isn’t on for a game, or a period, Woodcroft has other options of players who have shown they can play in the top nine for short periods of time.
— The Oilers’ power play didn’t score last night, but it created a few quality chances. The PP still isn’t at the level it was the to start the season, and the previous two years, but lately they are starting to look more dangerous again. They need to get back to the level they were at, and be as dangerous as the Avalanche PP was last night. The Oilers have the players to be just as dangerous as Colorado’s was last night.
— While the Oilers forwards TOI was spread out the defence minutes were much closer. Darnell Nurse (22:52), Cody Ceci (22:50), @Kris Russell (19:58), @Tyson Barrie (19:45), @Duncan Keith (17:23) and @Evan Bouchard (15:37).
The 5×5 minutes were very close with Ceci (16:58), Nurse (16:01), Barrie (15:34), Russell (15:12), Keith (15:01) and Bouchard (14:13).
Russell played 3:46 on the PK and I’ll be curious to see how Woodcroft fills those minutes if Brett Kulak replaces Russell at 5×5. Kulak wasn’t used on the PK much in Montreal, but he wants to play on the PK.
“I haven’t been used a lot in that area, but I’ve always wanted to. I’ve been used a bit, but not a lot. I hope I can be used more,” Kulak said yesterday while he was a guest on my TSN 1260 show.
— Kulak was elated to be playing for the Oilers. He grew up an Oilers fan on their family farm just outside Stony Plain (20 minutes west of Edmonton). “We didn’t go to games regularly, but I did get to see a few and they were the only NHL games I saw. I grew up an Oilers fan.”
I asked him who is favourite players were.
“(Chris) Pronger in the 2006 run was unreal. I also really liked (Shawn) Horcoff,” he said.
Kulak shared a great story about his father that illustrates how cool this trade will be, not just for him, but his entire family. He FaceTimed his father to tell him he was traded.
“He was in his tractor when I called him. He got a bit emotional. I could see his eyes watering. It was great. I’m so excited to come home and play for the Oilers in front of family,” said Kulak. You can listen to the full interview here, and you can hear his genuine excitement at being acquired by the Oilers.
Kulak and Brassard likely won’t play tonight. They are flying direct to Edmonton, and both are expected to make their debuts Thursday against San Jose. Kulak will wear #27 and Brassard will have #16. Kulak and his wife are expecting their first child on May 16th, and the trade allows them both to be closer to family. If Kulak plays well and fits in, there is a good chance he re-signs in Edmonton.