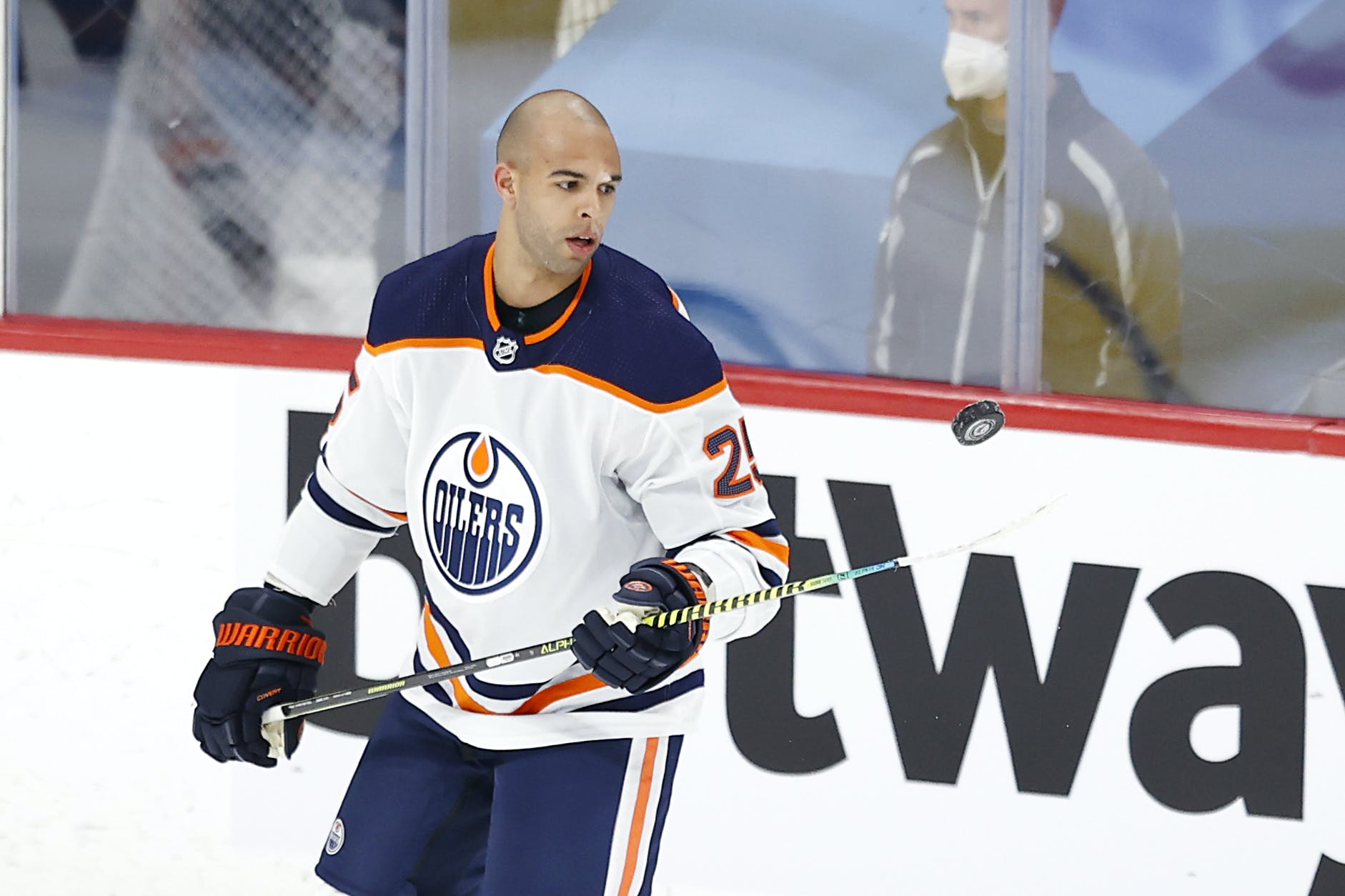 By Jason Gregor
8 months ago
I long for the days when players were evaluated for their play on the ice. A player either played well or he didn’t, but now salary has become part of the evaluation and salary impacts how some people view a player.
A prime example of this is Darnell Nurse. He currently has a $5.6m cap hit, and next year it will jump up to $9.25m. Because of that, some view him as a $9.25m player today. It is an odd analysis considering his contributions this season on the ice far exceed his $5.6m cap hit when compared to players making more.
— I try to avoid ripping a player for what he makes. I’ve also never met anyone who told their boss “I’m not worth that, please pay me less,” so I’ve never understood being angry at someone for getting a good salary. The biggest challenge in assessing players is that regardless of how a player performs, scouts, general managers, writers, broadcasters, podcasters, and fans will see something different. Everyone has personal biases for what they like. It will never change. If everyone had the same opinion sports would be boring. So let’s look at the overall numbers of some D-men around the NHL and see how Nurse compares.
— Since many believe salary matters, here are the D-men who have a $7.5m or higher cap hit this season. I included Nurse, because this year’s cap hit and next year’s average right around $7.5m.
Nurse is third in 5×5 TOI/game. He ranks sixth in CF%, eighth in FF%, 9th in SF%, 16th in GF%, 8th in xGF%, 11th in scoring chance for%, 10th in high danger chance for%, fifth in high danger goals for% and 19th in PDO.
— Nurse is 12th in goals against/60 at 2.46. Victor Hedman is at 2.43 and the only D-men making $9m+ with a lower GA/60 are @Roman Josi and @Cale Makar. And Nurse has done that playing in front of goalies who have a combined .903Sv%.
— Time on ice is often a big factor in contract negotiations for defencemen, and the website PuckIQ.com takes it a step further as they break down the quality of competition. They have split it into three categories: Elite, Middle and Gritensity. Here is a good write up of how they came up with these three designations as well as some other terms they have like Dangerous Fenwick and more.
Here is a screen capture of Nurse’s this year and season’s past. 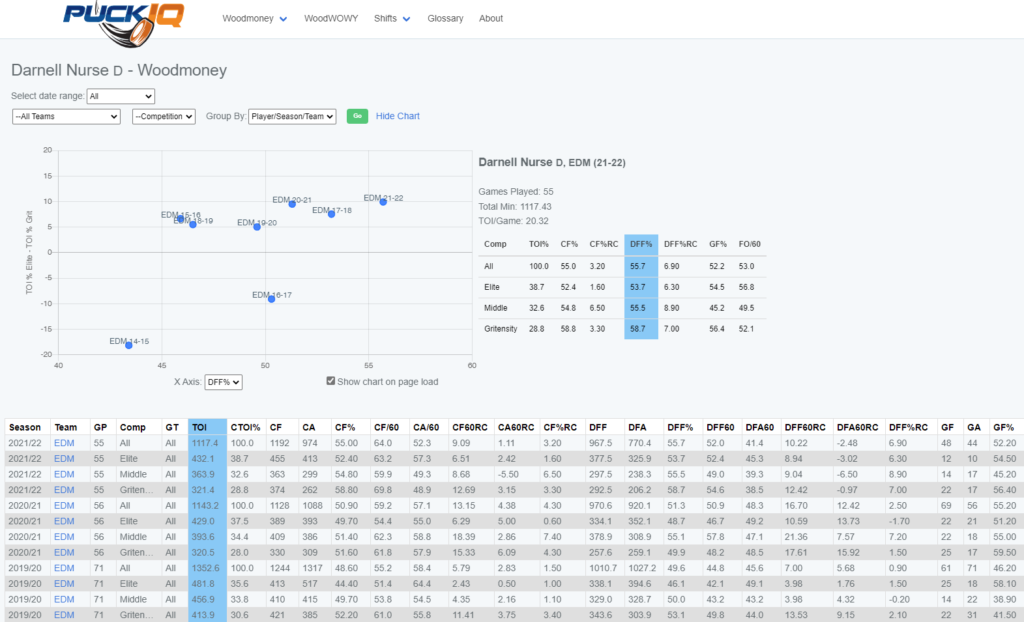 Suggestions that Nurse is having a worse season than last year are strange to me. He has scored seven fewer goals at 5×5, but has the same amount of assists in similar TOI and games played. More on that later.
—  You can see every player in the NHL at PuckIQ to see how they fare against elite, middle, and gritensity players. Below is a comparison among D-men who will carry a $9m+ cap hit next season. This is the percentage of their time on ice they have play against each respective group.
Doughty plays the most against elite, while Nurse and Hamilton play the most combined, 71.2% of their time, against elite and middle. When you play against elite players the odds of getting scored against increases. Nurse and Hamilton face the toughest competition among this group and among defenders with a cap hit of $7.5m/year.
— This season Nurse’s offensive totals are down a bit from last season. He has 28 points, which ranks 41st among D-men. However, even with his lower production this season, over the past three seasons Nurse is 11th in even-strength points. He doesn’t play much on the power play, so he will never be near the top in overall points. When he does play on the power play he has a higher P/60 than Evan Bouchard and a higher GF/60. Tyson Barrie is a better power play performer in both categories than Nurse or Bouchard so it makes sense Barrie is on the first unit right now.
— I’ve seen suggestions Nurse had a better overall season last year than this year. Did he?
As mentioned earlier, at 5×5 Nurse has produced 5-11-16 this year, compared to 12-11-23 last year. His goal totals are down, but his assists are the same, while his possession numbers are better. Nurse has started more in the defensive zone this year. Last season he had 56% of his stationary starts in the offensive zone and this season it is 50%. His goals are down, but all his possession numbers are better, excluding GF%.
— Nurse hasn’t, seemingly, been as aggressive as in the past. He isn’t fighting. He was never a regular fighter. He averaged three fights/year in his first six seasons, with four being the most in 2016. I would like to see him snap once or twice. I think that is a good element of his game. He doesn’t have to fight, and as stated, he didn’t do it often, but even Sidney Crosby averages one fight per year.
— While he isn’t fighting he is still physical. He is 10th in the NHL in hits and his 6.67 hits/60 is the third highest of his career. He had 8.57 in 2017 and 6.87 in his rookie season.
— He has 63 giveaways in 57 games this year compared to 61 in 56 games last year. Basically the same. He is 25th in the NHL among D-men in giveaways/60. Players with more include Jeff Petry, Miro Heiskanen, John Klingberg, Evan Bouchard, Aaron Ekblad, MacKenzie Weeger, Erik Karlsson, Dougie Hamilton and Thomas Chabot.
If you want Nurse to cut down on his giveaways a bit, that is fair, but even Roman Josi sits at 2.10 per game. If Nurse was around 2.00-2.10 that would be great.
— The other factor, which some Oilers fans might not want to discuss, is the reality of who could they replace Nurse with. Seth Jones set the standard for UFA contracts when he signed his deal with Chicago with a $9.5m AAV on July 23rd. Then Dougie Hamilton got $9m on July 28th, then Zack Werenski got $9.5m AAV on July 29th. Nurse signed his $9.25m deal on August 6th. The market changed in the previous week for UFA D-man.
Some will say the Oilers should have waited. Okay, let’s assume they waited and he was a pending UFA right now. The other top left-shot pending UFAs right now are @Ben Chiarot, @Nick Leddy, @Mark Giordano, Alex Goligoski, Calvin De Haan, Olli Maatta, Nikita Zadorov and Wil Butcher.
John Klingberg will be the top right-shot D along with Kris Letang and Josh Manson.
Looking at Nurse’s above totals from this season, and averaging out the fact he is 11th in even strength scoring among D-men the past three seasons, do you really think he’d have signed for much less? He’d have got very close to $9.25m this summer based on available players and the recent signing trend.
And the main factor is there is no guarantee any UFA D-men would sign here. Edmonton isn’t a top destination. Even Anaheim, a warm market, wasn’t on Evgenii Dadonov’s trade list, and that trade was revoked earlier this week.
— When you look at Nurse’s deployment, how much he plays, who he plays against, his overall production and his overall ability, he is a bargain on his current $5.6m contract. And if his play remains the same the first years of his next contract his value for dollar is competitive compared to Jones, Werenski and Hamilton.
— @Derick Brassard and @Brett Kulak will make their Edmonton Oiler debut tonight. Brassard told me yesterday he will start on the wing. We will see lines this morning, but Brassard is likely to start on the left wing on the fourth line. We could also see Ryan Nugent-Hopkins in tonight. If he is in, I’m interested to see what the top three lines look like. I could see Kulak playing with @Tyson Barrie to start.