By Jason Gregor
7 months ago
The St. Louis Blues don’t have an elite offensive producer, but they are a very good offensive team. They rank fifth in goals/game at 3.52, and possess the third best power play at 26.2%. Their leading point producer, Jordan Kyrou, sits 40th in NHL scoring with 62 points, but the Blues lead the NHL with 11 players with 30+ points. Florida has 10, and technically now 11 with the addition of Claude Giroux, but they are the only two teams with 10.
The Blues come at you in waves, and the Oilers will need all four lines and three D-pairs alert and ready to play.
— The LA Kings outshot the Oilers 41-33 on Wednesday, but if you look deeper the Oilers controlled much of the even strength play and created more chances, especially down low. 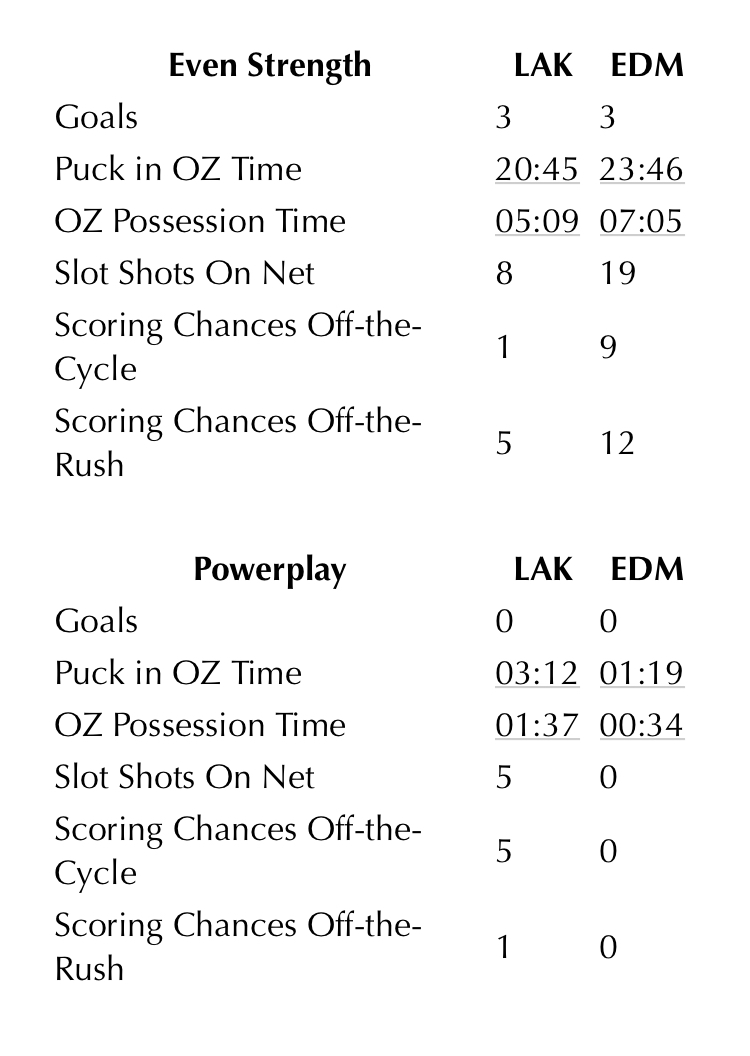 Edmonton had more shots from the slot (19-8), scoring chances off the cycle (9-1) and scoring chances off the rush (12-5) courtesy of Sport Logiq.
— One thing I noticed was how many of the Kings’ shots came from distance. I noticed many from outside the blue line, so I went through the game sheet and added up all the shots. The Oilers’ average shot distance on their 33 shots was 29.8 feet, while the Kings’ 41 shots averaged 35 feet.
— Then I looked at how many shots each team had from the 20-foot range. The Oilers had 15 (45.5% of their total shots), while the Kings had 11 (34.4% of their shots). The Kings took way more shots from distance, often without traffic in front of Mikko Koskinen, and the Oilers gladly let that happen. Shot totals are one aspect of a game, but luckily with more data available now, we can look deeper than just shots on goal. Wednesday was a good example of quality over quantity.
— The Oilers main issue was they had a 14-second lack of focus that allowed LA to get back in the game. It was the third time in the previous five games the Oilers have allowed two goals in fewer than 25 seconds. It happened against Dallas, Calgary and LA. It is a trend head coach Jay Woodcroft wants to remain in the month of March and not cross over into April.
— Connor McDavid reached 100 points for the fifth time in his career. He joins a very exclusive club as only the 19th player to score 100 points at least five times. He and Sidney Crosby are the only active players in the club. McDavid turned 25 in January and seems destined to join Mario Lemieux and Wayne Gretzky in the ultra-rare 100-points-in-10-seasons club.

— The Oilers’ goaltenders have been very good in the shootout this season. They’ve allowed one goal on 12 attempts. @Mikko Koskinen has stopped all five shots he’s faced, @Stuart Skinner has stopped both attempts against him and @Mike Smith stopped four of five.
— Koskinen has stopped 11 consecutive shootout attempts dating back to 2019-20. He stopped all six in 2019-20, wasn’t involved in a shootout last season and has stopped all five this year. Koskinen and Pavel Francouz (9-for-9) are the only goalies who haven’t allowed a goal when facing at least four shootout attempts over the past three seasons. Yesterday I asked Woodcroft who would start in goal tonight and he said they hadn’t decided yet. On Tuesday, prior to Wednesday’s game he said Koskinen would start. Will Woodcroft run Koskinen for a fourth straight game of go with Smith?
Koskinen started four in a row between March 1st to 9th and in the fourth game he allowed five goals in a 7-5 win over Detroit.
He also started four consecutive games between January 20th to 27th and won all four. He stopped 28 of 30 shots in the fourth game against Nashville.
Koskinen started seven in a row (after Mike Smith was injured) between October 21st and November 5th. He went 6-1 with a .917Sv% and 2.56 GAA. In games 4-7 he was 4-0 with a .915Sv% and 2.50 GAA.
— @Jordan Binnington has started 30 games for the Blues while Ville Husso has started 29. Charlie Lindgren (5) and Joel Hofer (1), started the others due to injuries and COVID. However, Husso has started 20 of the past 30 Blues games. He has a .917Sv% in those games, while Binnington has struggled at .888. Husso has started six of the past seven games, with Binnington playing the middle game in that seven-game span. Husso has only started four games in a row once, and who plays in goal tonight could have a major impact on the outcome of the game. The Blues play in Calgary tomorrow, so Binnington will play one of the two, it is just a matter of which one. Often coaches play their starter in the first game of back-to-backs.
— @Leon Draisaitl is on the verge of scoring 50 goals for the second time in his career. He will be the 46th player to score 50 twice. @Auston Matthews reached 50 goals for the first time in his career last night. Draisaitl and Matthews have a lot of mutual respect for each other, but both are highly motivated to win the Rocket Richard trophy for most goals. It is shaping up to be a great race, and it might propel both of them to push 60 goals. Matthews needs five goals to break the Maple Leafs franchise record (Rick Vaive had 54 in 1982), while Draisaitl will set a new career best (50 was his previous high). The last player to score 60 goals in a season was Steven Stamkos in 2012. Only Ovechkin (2008) and Stamkos have done it in the past 25 NHL seasons.
— I won’t be surprised if Woodcroft re-inserts @Zack Kassian and @Devin Shore in the lineup tonight. Woodcroft has stated many times he wants to keep players in the rotation. “We have 14 NHL forwards, but only 12 spots. When I take a guy out it doesn’t mean they have played poorly,” he said. Expect to see a regular group of players rotating in and out over the final 14 games. We’ve already seen Derek Ryan, Josh Archibald, Kassian and Shore and I think Derick Brassard will be added to that group and possibly a few others.
— The bottom six forward group of @Ryan Nugent-Hopkins, @Ryan McLeod, @Warren Foegele, Brassard, Archibald and Ryan combined for one shot on goal v. the Kings. Brassard had the only shot and he played the fewest minutes (6:03). Archibald’s inability to travel will force him to sit out at least seven games this month, and likely more. He has been very physical, but he’s been getting crushed for goals against. He is an upgrade on Colton Sceviour and Tyler Benson, but with the Oilers healthy his spot in the playoff lineup becomes less likely.