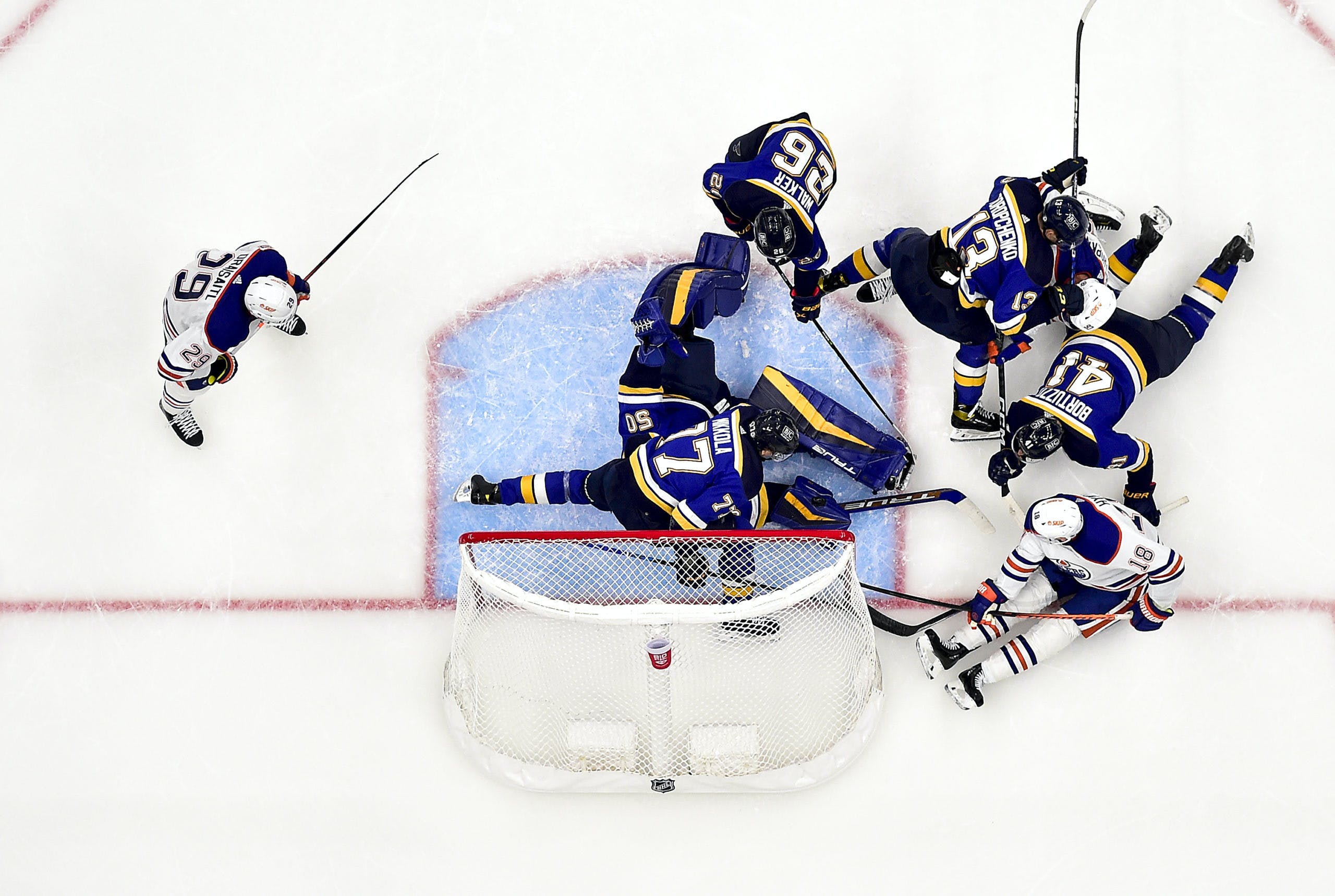 By Jason Gregor
1 month ago
The St. Louis Blues’ calling card has been sound defence throughout the 2000s. This is the 23rd NHL season of the 2000s and the Blues are tied with Minnesota for the third-best goals against/game at 2.62. New Jersey is at 2.61 and Boston has the best at 2.59. Their organizational identity has been built around good team defence for years, but that isn’t the case this season.
— The Blues are leaking goals like this is the 1980s. They are 29th in GA/GP at 3.72, which is the 6th highest in their 55-year history. They posted 3.80 in 1978, 3.95 in 1983 and 1984, 4.35 in 1979 and 4.36 in 1982. Scoring is up across the NHL this season, but the Blues are completely out of sync and even their head coach thinks they’ve lost their identity.
— After their loss in Winnipeg Craig Berube voiced concern about his club. “There are just not enough guys ready to play,” said Berube. “We have a great culture here, that we built and a team-first work ethic attitude. It’s lost now, and we’ve got to get it back. There are too many guys, veteran guys, young guys… if they don’t come to the rink and think about the team, and put the team first, we’re not going anywhere, and right now I don’t see that happening. I think it’s just the attitude of the team right now. It crept in here and it’s not good right now.”
— St. Louis has allowed four goals or more in 16 of its 29 games played this season. That is 55% of their games compared to the Oilers who have allowed 4+ goals in 40% (12 of 30). The Oilers have never been a dominant defensive team, although they were top five under Woodcroft last season. Edmonton has averaged 2.25 GA/GP over its past four games, and the team is slowly starting to tighten up defensively. They have moved up from 27th to 22nd in GA/GP due to their recent four-game improvement.
— The Blues lost 3-2 to Colorado, before blanking Nashville 1-0 in overtime on Monday. They did play better defensively, but it is too early to say they’ve rediscovered their defensive identity.
— Oilers fans might have a different impression of the Blues because the first two meetings were low scoring. St. Louis won 2-0 in Edmonton on October 22nd and the Oilers were victorious 3-1 in St. Louis four days later. The teams have combined for six goals in two games, but each team scored an empty netter, so only four goals beat goaltenders. Stuart Skinner and Jordan Binnington were both quite good in the second game, especially Skinner who stopped 37 of 38 shots.
— Connor McDavid and Leon Draisaitl have one assist each in the two games. Draisaitl and McDavid’s production this season has been outstanding. It is rare for one team to contain both of them. Here is a look at how their point totals by games.
McDavid has more four-point games than he does zero-point games. McDavid has 13 games with 0 or 1 point and 17 multi-point games.
— McDavid has nine games with 3+ points.
Draisaitl has seven games with 3+.
Sidney Crosby, Nikita Kucherov, Mikko Rantanen and Tage Thompson have six.
Ryan Nugent-Hopkins and Jason Robertson have five.
Sebastian Aho, Kyle Connor, Kevin Fiala, Johnny Gaudreau, Erik Karlsson, Alex Pietrangelo, Brady Tkachuk, Mathew Tkachuk and Alex Tuch have four.
— McDavid has 58 points in 28 games when not facing the Blues this season, but only one in two games against them. The Blues have been the best team at limiting McDavid’s offence over his career. He averages at least 1.00 points/game vs. every team except the Blues. He’s at 0.85 with 17 points in 20 games. Still solid production, but the Blues have done well limiting his offence. They’ve held him pointless eight times, he had one point seven times and he’s had two points five times. Most NHL players would love scoring 17 points in 20 games, but by McDavid’s standards the Blues have been the best at containing him. He always seems to figure things out, and it only seems to be a matter of time before he picks up three points.
— McDavid has 93 games with 3+ points but doesn’t have one against the Blues, Sabres (12 points in 12 games) or Detroit (13 points in 11 games).
— Would you start Stuart Skinner or Jack Campbell tonight? I would go with Skinner and then Campbell on Saturday afternoon. Skinner is the starter right now and deserves more starts, but Campbell did have a solid game. I thought giving Campbell Anaheim, which only has one regulation win in 30 games and have been outscored 130-70, would boost his confidence. Former goalie Joaquin Gage had a different viewpoint when I asked him who he’d start tonight.
“I would actually go to Campbell tomorrow and then Skinner v. Anaheim. I believe there is a different mindset when you go in a game where you are supposed to win (ANA), and sometimes you put more pressure on yourself because of it.” I hadn’t looked at it that way. I’d still go with Skinner though. What about you?

Thanks to Jesse and Steve for their great bids on the Michelle Derk Realtor package and the golf package from Eagle Rock.
DAY 11: Five Course Meal at Chop Steakhouse

You can bid by listening to TSN 1260 and calling 780.444.1260 or text 101260 between 2-6 p.m. today. All proceeds will help out The Christmas Bureau.
Editorials
Featured
Oilers Talk
Recent articles from Jason Gregor