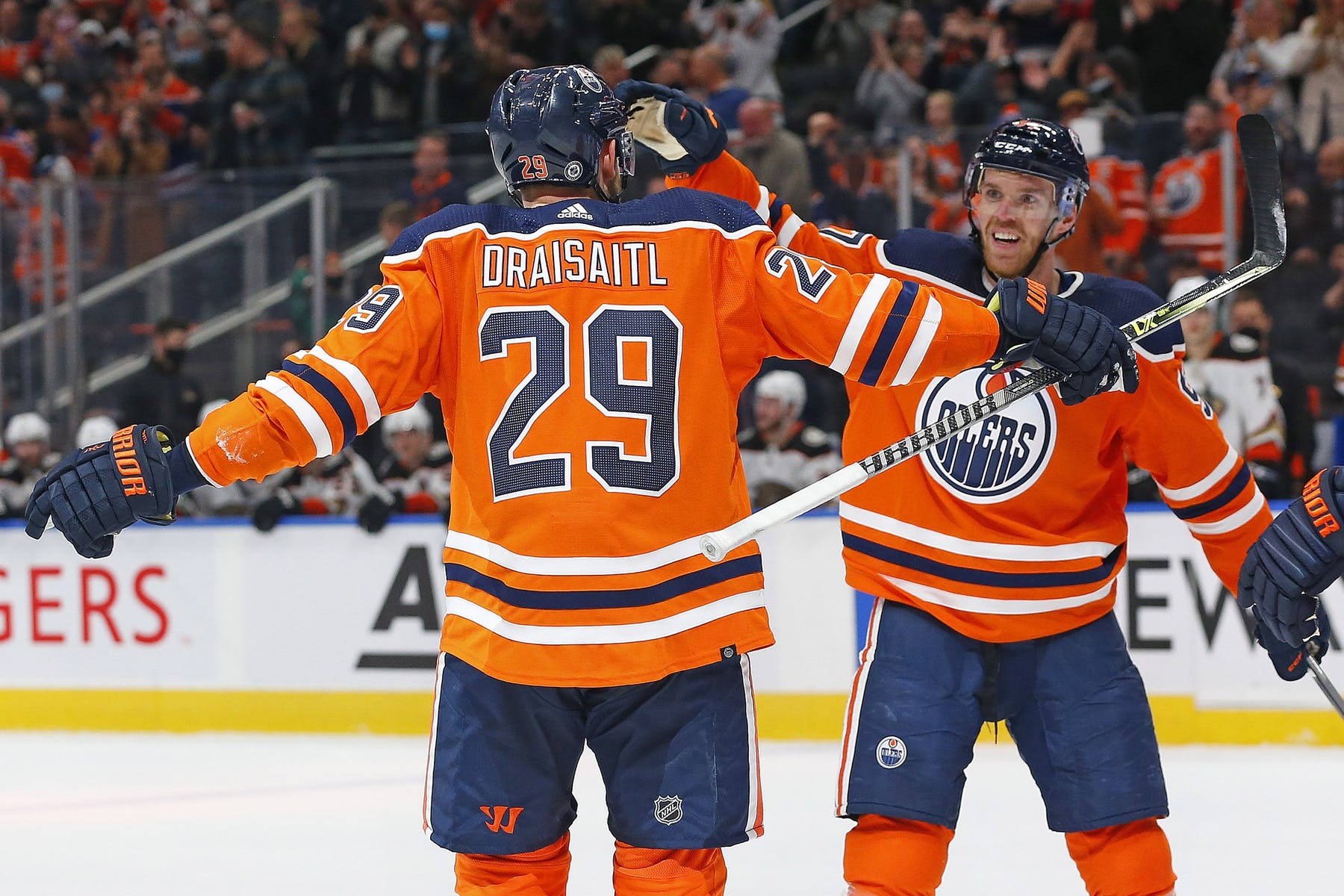 By Jason Gregor
9 months ago
The Oilers are 12-3 against the Pacific Division. They are are 3-0 v. Vancouver, 2-0 against Calgary, 2-1 v. Seattle and Vegas, 1-1 v. Los Angeles and 1-0 against Anaheim.
The current NHL playoff format has the first two rounds within your division (with possible wildcard crossover) and so success against Pacific rivals is vital to ensure you get to the postseason.
Edmonton faces their third division rival in four days and will be looking for a three-game series sweep. They defeated San Jose 3-0 and LA 5-2 and face a Ducks team that is sliding down the standings.
Anaheim got crushed 6-2 in Calgary last night. After starting the season 16-9-5 the Ducks have only won seven of their previous 20 games (7-9-4) and now sit in ninth place in the Western Conference.
Over the past two months the Ducks have struggled to score averaging 2.55 goals/game (28th), while allowing 3.20 goals against/game. The challenge for the Ducks is their goaltenders have a combined .916Sv% over the past 20 games and they are still allowing that many goals. They are allowing too many quality chances.
John Gibson has a .920Sv% in his last 13 starts, which included him getting the mercy pull after 28 minutes in Calgary last night. He will start tonight and he gives them the best chance to win.
Anaheim has averaged 34.8 shots against over the past two months, while only firing 26.8 shots on goal. Getting out shot by eight shots per game is not a winning recipe.
The Oilers are sixth in the NHL in shots for, 35.8, the past two months. They are 13th in GF/GP at 3.10 and the only reason they aren’t higher is their PP hasn’t been as productive as usual. The PP will eventually get on track. Having some practice time next week will allow Jay Woodcroft and Glen Gulutzan to tweak a few things. Until then they will look for the skill level of the Oilers power play skaters to bury a few goals.
Edmonton has found ways to win against Pacific opponents. They’ve won low-scoring games, 2-1, 3-2, 3-0, and high-scoring affairs like their 6-5 victory over Anaheim in the third game of the season. The Oilers have tightened up defensively over the past 11 games, especially at 5×5 where they’ve only allowed 16 goals.
How much is the new strategy from Woodcroft and how much is from the player’s being more committed?
“I’d say it is probably a little bit of both,” said McDavid. “Woody has certainly come in and put his touches on things. As players, whenever there is a coaching change you usually see a little bit of a spike. It is different to get a fresh voice in there and sometimes it helps. It has only been three games, so we have a long way to go.”
Not doubt Woodcroft has implemented a few tactical changes in how they attack in the offensive zone, but also how they swing and have a mind on not allowing the opposition to attack with speed through the neutral zone. They’ve played three teams who rank 29th, 25th and 22nd in offence, so they haven’t shut down an offensive team yet. That doesn’t diminish the improvements we’ve seen, just pointing out that slowing down the Islanders is much different than the Panthers or Lightning.
Those tougher tests are coming next week, but tonight the Oilers will be looking to continue to punish the Pacific.

Hyman– McDavid – Puljujarvi
Kane – Draisaitl – Yamamoto
Foegele – RNH – Ryan
Benson/Shore/Perlini – McLeod
Nurse – Barrie
Lagesson – Ceci
Niemelainen – Bouchard
Broberg
Smith
Mike Smith will start, but we aren’t sure who will be the 11th forward. It is expected the Oilers will stick with seven defenceman as they’ve had success rotating the young guys during games.

Henrique – Getzlaf – Terry
Milano – Zegras – Rakell
Grant – Lundestrom – Silfverberg
Deslauriers – Steel – Robinson
Lindholm – Drysdale
Fowler – Mahura
Benoit – Shattenkirk
Gibson
Dave Manson will have to wait to coach against his son. Josh is still out with an injury. The Oilers have a clear advantage down the middle and it will be interesting to see which matchup Woodcroft tries to exploit with last change. 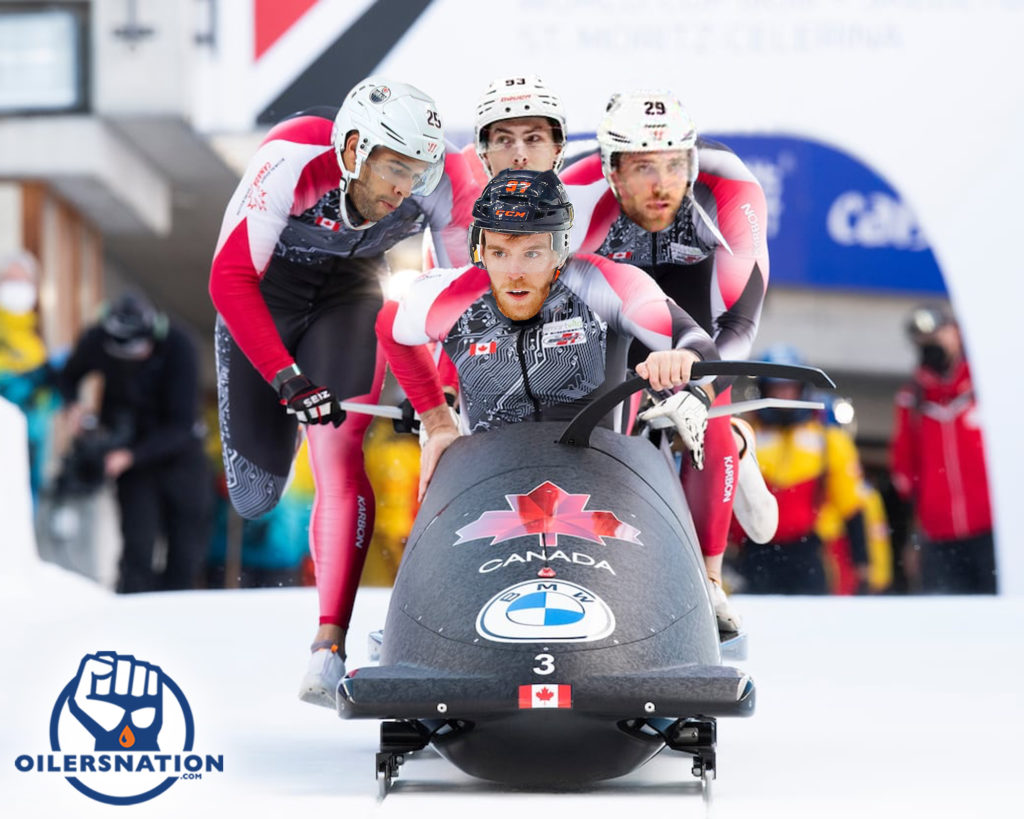 Photoshop: Tom Kostiuk
GAME DAY PREDICTION: Oilers win their fourth in a row with a 5-1 victory.
OBVIOUS GAME DAY PREDICTION: McDavid scores for the third game in a row. It is his second three-game goal scoring streak of the season and first since games #2-#4.
NOT-SO-OBVIOUS GAME DAY PREDICTION: Darnell Nurse was very proud talking about his cousin Sarah and her gold medal performance for Team Canada in women’s hockey and leading the tournament in scoring. He feeds of her offensive output and scores his first career goal against the Ducks.