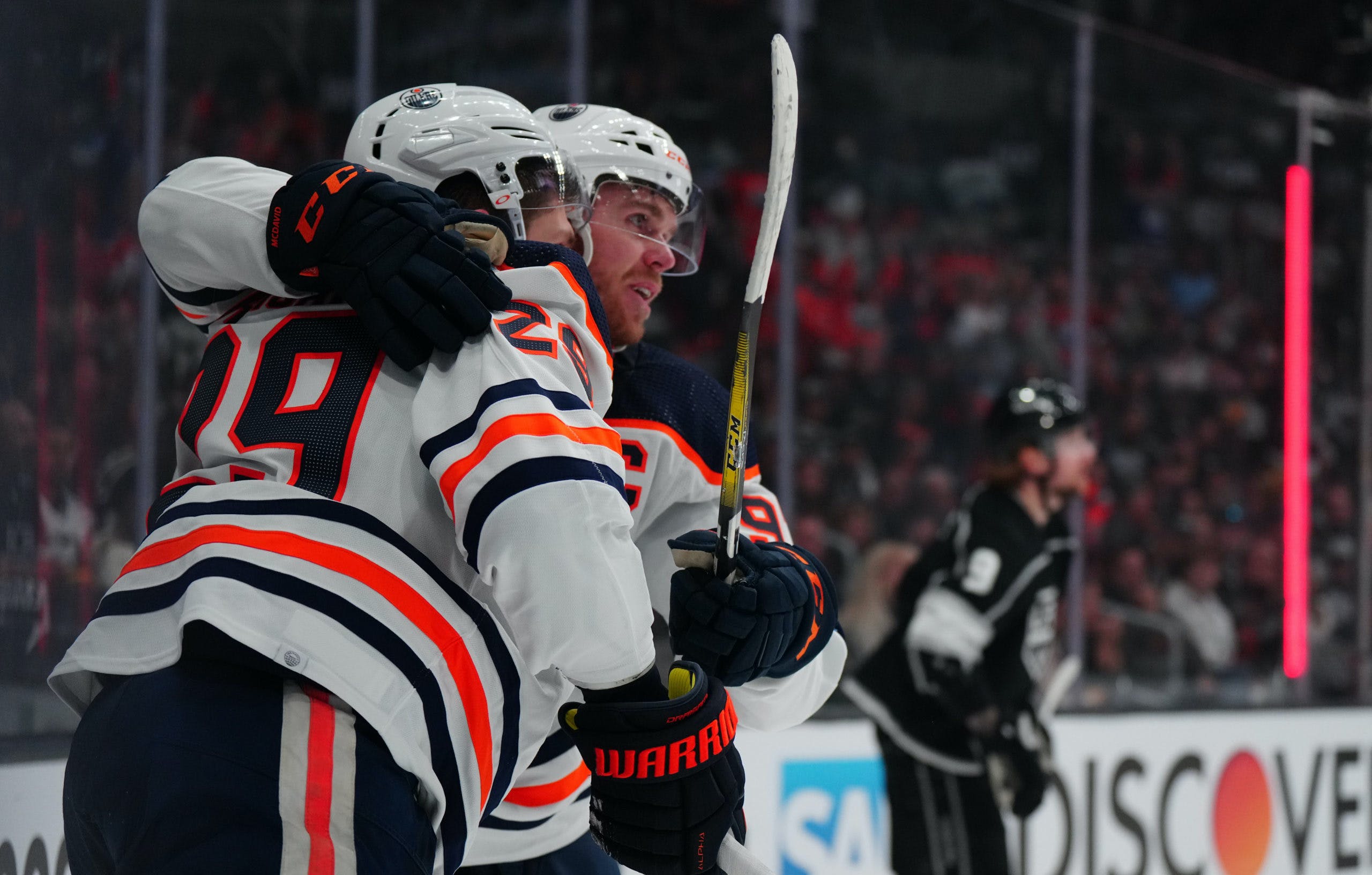 By Zach Laing
8 months ago
It was far from a perfect game for the Edmonton Oilers, but it was just enough to secure a massive game three win in Los Angeles.
The Oilers came out with some pep in their step to kick off the game and it paid off in dividends, but the difference-maker in their FINAL SCORE was their calm and patient play.
After a game one that saw them play flustered all night, the Oilers have really come into their own, and boy, did they look the part tonight. They secured a lead early and they never let up.
Even at the time when the score effects took over that saw the LA Kings pepper the Oilers net with low-danger shots, the Oilers stuck with it. Mike Smith turned aside the dangerous ones and even though the playoff anxiety snuck in, this game was never in reach for the Kings.
All in all, it was another massive night for a lot of players. Connor McDavid and Leon Draisaitl each finished with two points, while Evander Kane scored a hat trick on his own cashing in the final tally with 19.7 seconds left in the game.
But it was Zach Hyman who I thought was a real threat tonight. He was largely quiet through games one and two, but had a breakout performance tonight scoring two huge goals and adding an assist on top of it.
The Oilers as a whole played their game all night long. They were calm cool and collected and now, they have the Kings on their heels. In the last two games alone, the Oilers have outscored the Kings 14-2 and have completely turned the series on its head.
The NHL playoffs aren’t decided upon aggregate, otherwise, this series would be over, but Edmonton has found themselves in a great spot. They’ve completely settled into their game and have a chance to take a commanding lead Sunday night in Los Angeles.

Game three opened up much like game two. The Oilers had some jump in their step right away and boy, did it pay off. Things got a little feisty in the Oilers’ crease at the 2:40 mark sending the game to a little four-on-four action.
Halfway through, Jay Woodcroft snuck out Connor McDavid and Leon Draisaitl who turned a loose puck in front of the Oilers’ net into a two-on-one the other way. McDavid to Draisaitl. Need I say more?
When the Oilers got a powerplay three minutes later, Zach Hyman slipped to the side of the net on the powerplay deflecting home a pass to make it a 2-0 game.
The Kings offered some pushback by the end of the first, eventually leading the shot clock 19-7 by the end of the frame. Mike Smith made some strong saves, but a lot of the looks the Kings had come far from the outside. Quantity over quality, so they say.
Come the second, the Oilers started to take over the game. 6:27 into the frame, they finally got rewarded as Evander Kane found the rebound of a Cody Ceci point shot and was able to bang home the rebound.
One minute and 20 seconds later, Leon Draisaitl flipped a puck out of the Oilers’ zone allowing Zach Hyman to skate underneath it, before the rugged winger did the rest of the work taking it to the net to make it a 4-0 game. The Oilers’ fourth goal was enough to chase Jonathan Quick from the Kings’ crease.
While Kane got his second two minutes later off another rebound, the Kings started to push. Anze Kopitar took a puck to the front of the Oilers’ net somehow managing to flip a puck over Smith’s shoulder, while Philip Danault scored on a loose puck on the powerplay with 2:30 to go.
The second was a weird one to say the least. While Edmonton came out guns blazing and ran up the score, they weathered some adversity in a good push back from the Kings.
And in the third period, the Oilers had completely settled in. They limited the Kings to 11 shots, but none of them felt threatening and you could tell LA started to feel like the game was out of reach.
Around the 10-minute mark, you could almost feel the game slow down. Edmonton shut things down defensively and wasn’t interested in playing a run and gun game.
As things calmed down, Ryan Nugent-Hopkins found the back of the net twice and Evander Kane completed his hat trick.

Zach Laing is the Nation Network’s news director and senior columnist. He can be followed on Twitter at @zjlaing, or reached by email at zach@oilersnation.com.
Nation Takes
News
Oilers Talk
Post Game
Recent articles from Zach Laing