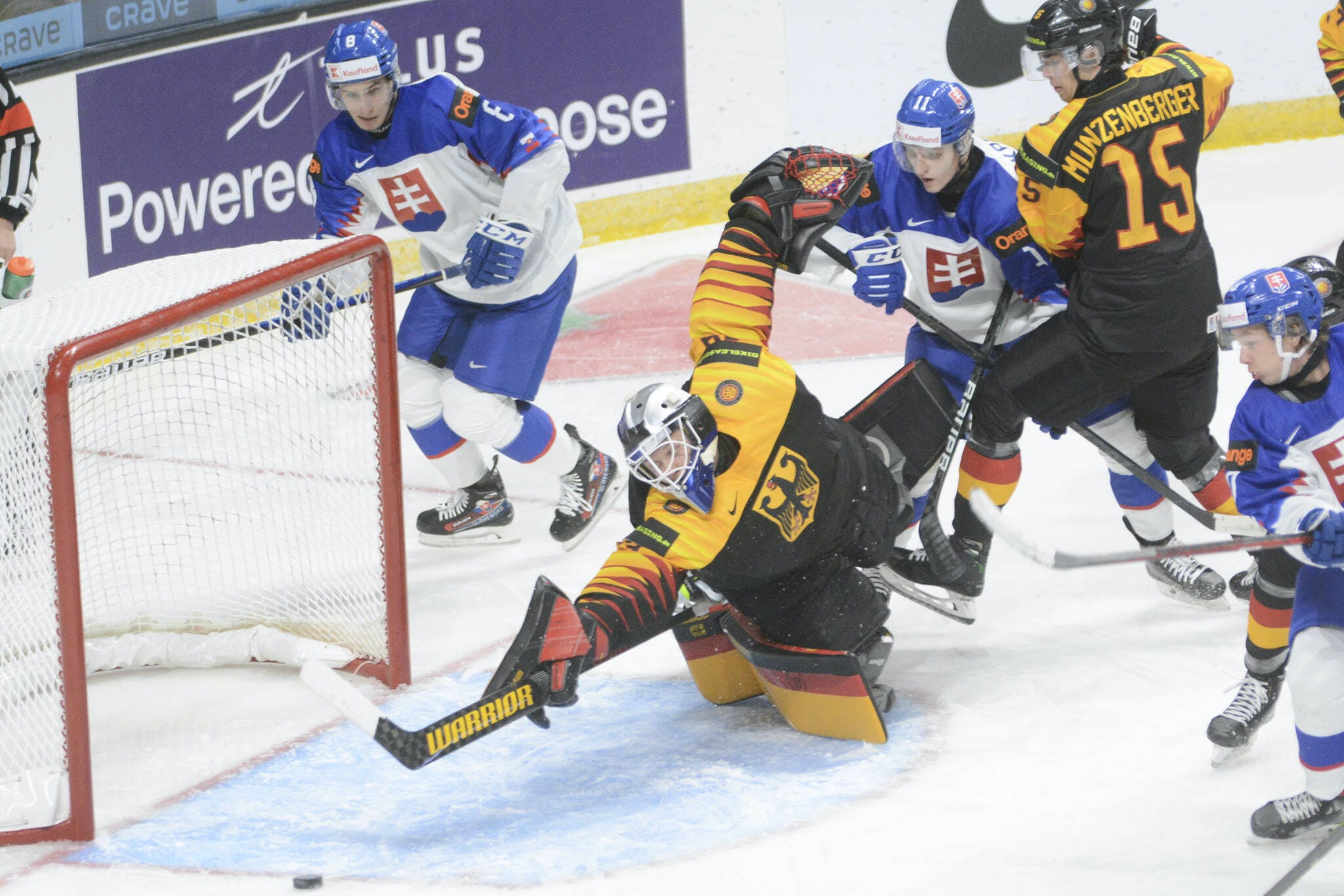 By Liam Horrobin
11 months ago
The level of goaltending at the World Juniors this year is high, especially when considering the first round picks Sebastian Cossa, Yaroslav Askarov and Jesper Wallstedt are all playing in the tournament. You can add Dylan Garand and Drew Commesso to that list as well, though, they are not first-round picks but high-end talents to be sure.
Two goaltenders that have risen to the occasion to join that group are a pair of Germans.
Nikita Quapp and Florian Bugl have given Germany a chance in the opening two games. They battled hard on night one against Finland, but ultimately fell 3-1 despite playing well. The next night, Germany responded with a big 2-1 overtime victory over Czechia. That result gives them the advantage over Czechia as they battle for third in Group A, assuming Canada and Finland finish first and second.
Quapp’s 0.864 save percentage against Finland doesn’t give a true reflection on how he played. He made a few great stops in the first period to keep the Fins at bay. The first two goals he conceded were both deflections with little he could have done. Quapp didn’t stand much of a chance on the third goal, either. The Germans opted to leave Samuel Helenius wide open in front, essentially putting the nail in the coffin.
“Nikita [Quapp] played a great game for us today,” said Luca Munzenberger, following that loss to Finland. “He had a couple of big saves and definitely kept us in the game.”
“It was a good game for us, much better than the exhibition game against Slovakia,” commented Nikita Quapp. “I think we need to shoot the puck more often, then we will be fine tomorrow (Monday) against Czechia.”
Quapp must’ve mentioned the idea of shooting to his teammates, too because that’s exactly what they did. Germany fired 32 shots onto Jan Bednar in the Czechia goal, ten more than Levi Meriläinen faced on Boxing Day. Two of those shots beat Bednar, with both coming off the stick of Alexander Blank, including the overtime winner.
Bednar had a great game and deserved high praise for his performance; however, he wasn’t the better goaltender on the night with that acknowledgement going to Florian Bugl. Bugl had a tough outing against Slovakia in their lone exhibition game but bounced back in a big way on Monday.
Bugl made a huge stop against Mysak, denying him with a spread eagle save in the first period. That stop helped set a tone for what was to come as Bugl finished with 39 saves. He was unfortunate to concede at all. Jan Mysak passed the puck in front of the German goal, which deflected off the skate of Arkadiusz Dziambor.
“I think it’s really high up because it’s a very important tournament, and to represent the country with a good performance, it’s the best feeling ever,” said Bugl when asked if this was one of his best games.
It’s looking like Germany is becoming this year’s fan favourite team, especially after their post-game celebrations against the Czech’s.
“I think it’s the best feeling to win and sing the anthem with the boys together,” said Alexander Blank following Monday’s win. “We’re a very tight team. We all love each other and want to win for each other. And that’s why we are screaming our anthem.”
Confidence and team chemistry help you have success at the World Juniors. Canada, Sweden, and the USA can win games with their offence alone. Lower end hockey nations rely upon that chemistry and goaltending, which Germany has. Of course, on-ice performance matters more, and the German’s need goaltending to continue. We have seen it happen plenty of times at the World Juniors, with a good example being Denis Godla. In 2015, Goldla was outstanding for Slovakia, helping them win a bronze medal, after beating Sweden.
Does Germany have enough offence to win the bronze medal? I guess we’ll never know.
One thing we do know is that the German goaltenders played well in their two games. It’s an unfortunate way to end this year’s World Juniors, especially for those players involved. Hopefully, there can be some resolution to this and we can see the World Juniors be played in 2022.
Nation Takes
Oilers Talk
Recent articles from Liam Horrobin