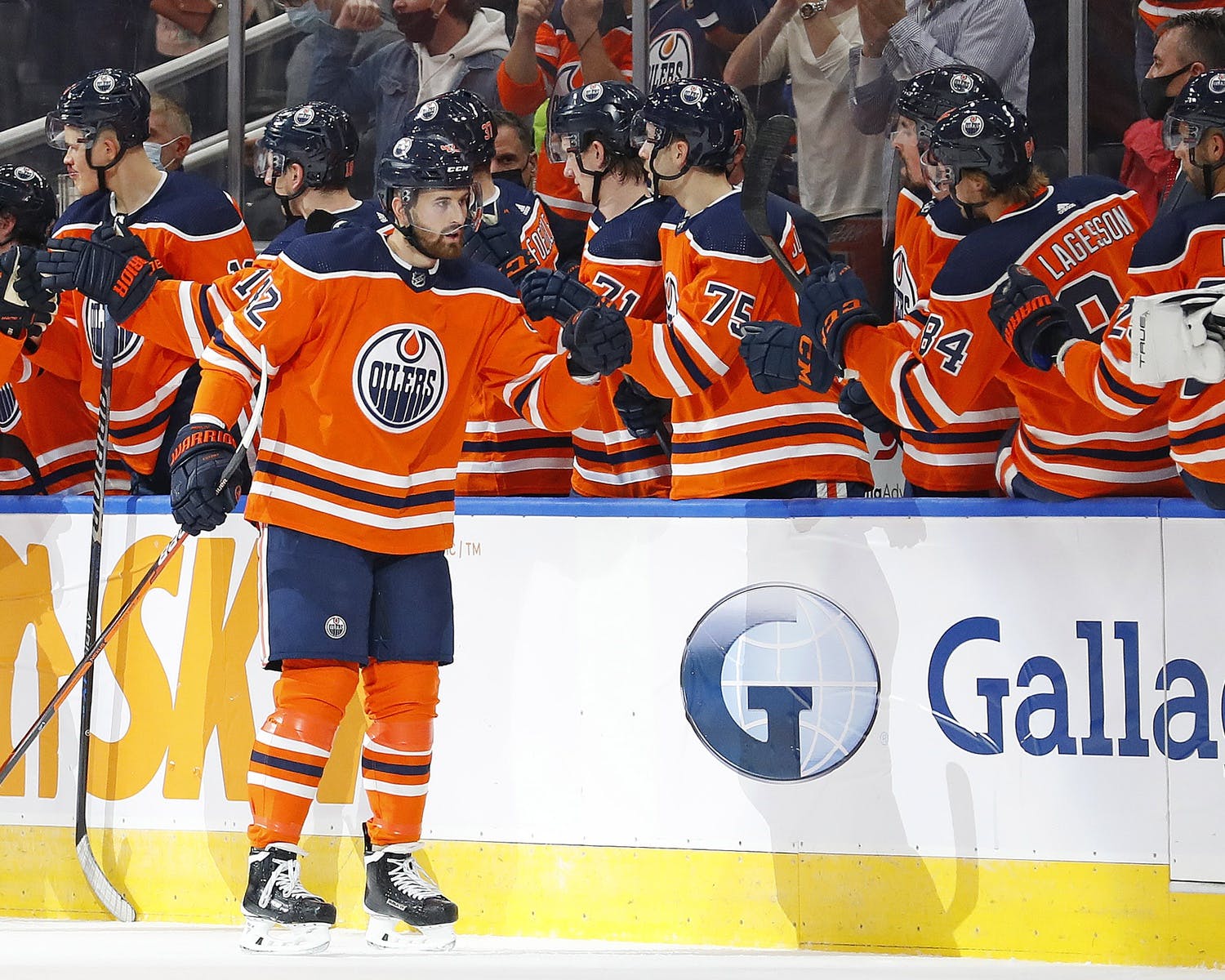 By Jason Gregor
1 year ago
Welcome to the 11th edition of Help Me Understand.
Sports, hot takes, and narratives. Some make sense, others perplex me.
—  Help me understand why @Brendan Perlini can’t get more ice time. During this horrendous 2-10-2 slide, Perlini has only skated in six games. He’s played a total of 57 minutes at 5×5, yet he is tied for the team lead in 5×5 goals with three. Of all the players he is 23rd in TOI at 5×5. How is this possible?
He has 14 shots, which is tied for ninth, and he leads the team in shots/60 at 14.6, yet he can barely get on the ice?
He must be getting outscored or out chanced, right? Nope.
His possession numbers are:
52CF%, 52.4FF%, 53.3SF%, 57.1GF%, 59.3xGF% and 61.5HDCF%.
He is one of only four players who have been on the ice for more goals for than against, yet he can barely get on the ice.
Perlini continues to have a great attitude. He smiles, and his press conferences are must-listen events, as he is articulate, insightful, positive, and thought provoking, but Dave Tippett has resisted playing him.
I know he practiced on a line with McDavid yesterday and will play on his wing on Thursday, but what took so long?
— Help me understand why fans are still complaining about the @Duncan Keith trade. He has been the Oilers’ best D-man the past six weeks. By every metric, he is the best. It isn’t his fault the rest of the team isn’t playing up to their capabilities and the coaching staff isn’t coaching up to their capabilities. He is giving you solid value even with a $5.5m cap hit.
You can look at his entire season and you’ll see he is the only Oilers D-man who is 50% of better in every category.
There are many issues with the play of the Oilers this season, but Keith isn’t the main problem. He’s gotten better when things have gone sideways. While other players are struggling during this rough patch, he has actually played better than he did earlier in the season.
— Help me understand why the NFL has the worst rules in the final two minutes of any sport. I enjoy the NFL, but the final two minutes are a disaster. Just incorporate the CFL rules for the clock in the final two minutes. It will make for more exciting football.
— Help me understand why so many of the Oilers’ top offensive players have gone MIA in the last 12 games at 5×5.
@Jesse Puljujarvi has one goal in 12 games.
@Zach Hyman has no goals in 11 games.
@Ryan Nugent-Hopkins had one goal in 9 games.
@Kailer Yamamoto has three goals in his last five games, and has produced more, but he is still getting outscored 13-8.
Even by their standards, @Connor McDavid and @Leon Draisaitl have slumped slightly with 3-4-7 each.
And while their offense has dipped, all of the Oilers’ top-six forwards are under 50% in GF-GA.
You can say maybe it is a bit of bad luck for McDavid, considering his other possession numbers are all over 58%, but when your top lines are getting outscored it is difficult to win.
The bottom six looks like this:
Only Foegele is under 50% in high danger chances for% (HDCF%). And he played in the top-six for a few games. As a group they are -7 in GF-GA, while the top-six is -24.
— So help me understand why Tippett continues to play his top-six so much? At some point you have to adjust the minutes to match the results you are seeing from the players. I’m not saying start playing the top-six close to the same minutes as the bottom six, but reducing the TOI of the top-six by a few minutes might be beneficial. After a bad start to the season, the bottom six has been fairly solid when you look at xGF%, HDCF% and SF%. They aren’t getting crushed in those departments, so the coaches might want to consider giving them a few more minutes.
— Help me understand how the Eastern Conference has no playoff race and we are only in the middle of January. The eight playoff spots in the east are locked up. It is remarkable to see.
Since the NHL adopted the shootout in 2006, the largest gap between the eighth seed and ninth seeds at the end of the regular season in the Eastern Conference was four points in 2013. We saw a three-point spread in 2012 and 2014, but every other year between 2006-2020 it was either a tie, or a one or two point difference separating eighth and ninth in the east.
The West has seen a bit more separation with a seven-point gap in 2017, five-point gaps in 2010, 2012 and 2016 and a four-point gap in 2019. But nothing like we’ve witnessed this year. 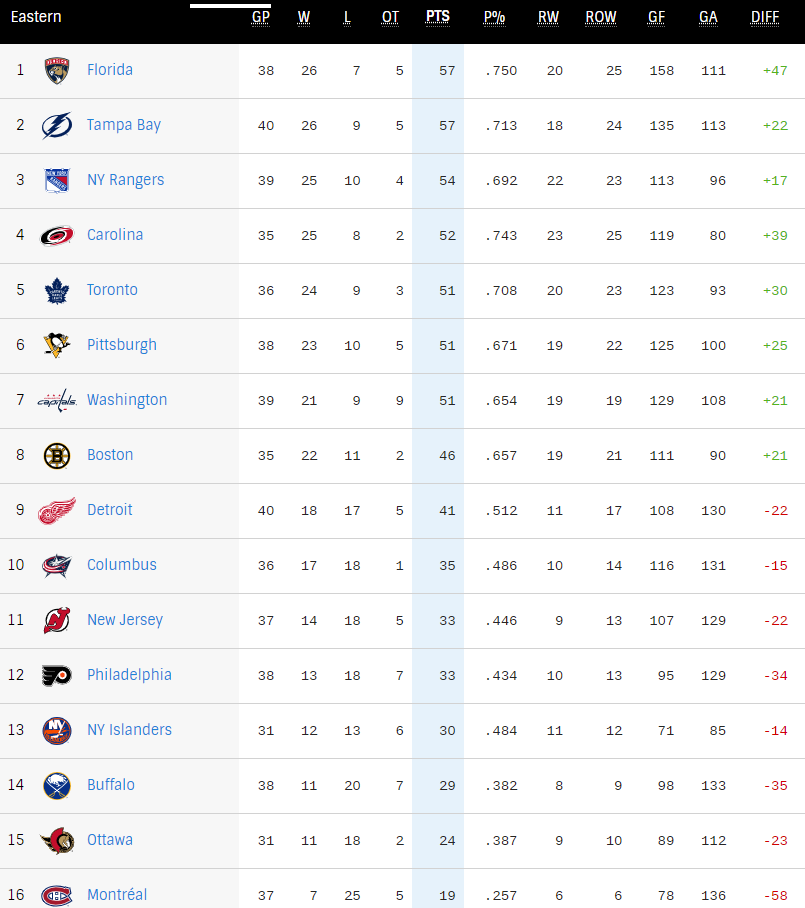 Detroit is five points behind Boston, but they’ve played five more games. Look at the point% difference. Detroit sits with a .512P%, while Boston is at .657. They are slightly ahead of Washington, which is at .654.
Compare that to 2013 when the eighth-place Islanders finished four points ahead of ninth place Winnipeg. The Islanders had a .572P% and Winnipeg was at .531. That was a gap of 0.41p%. Right now the point% gap between Washington and Detroit is a whopping 1.42.
Detroit is on pace to finish the season with 84 points. Washington is on pace for 107 and Boston is 108 and they are currently the seventh and eighth place teams. We’ve never seen such a significant disparity between the contenders and pretenders. The playoffs in the east should be electric. Some very good teams will lose in the first round.
— Meanwhile, Gary Bettman is relieved there is some parity in the Western Conference. Twelve teams are in it, while Vancouver and Chicago are a hot-streak away from feeling like they are in it. 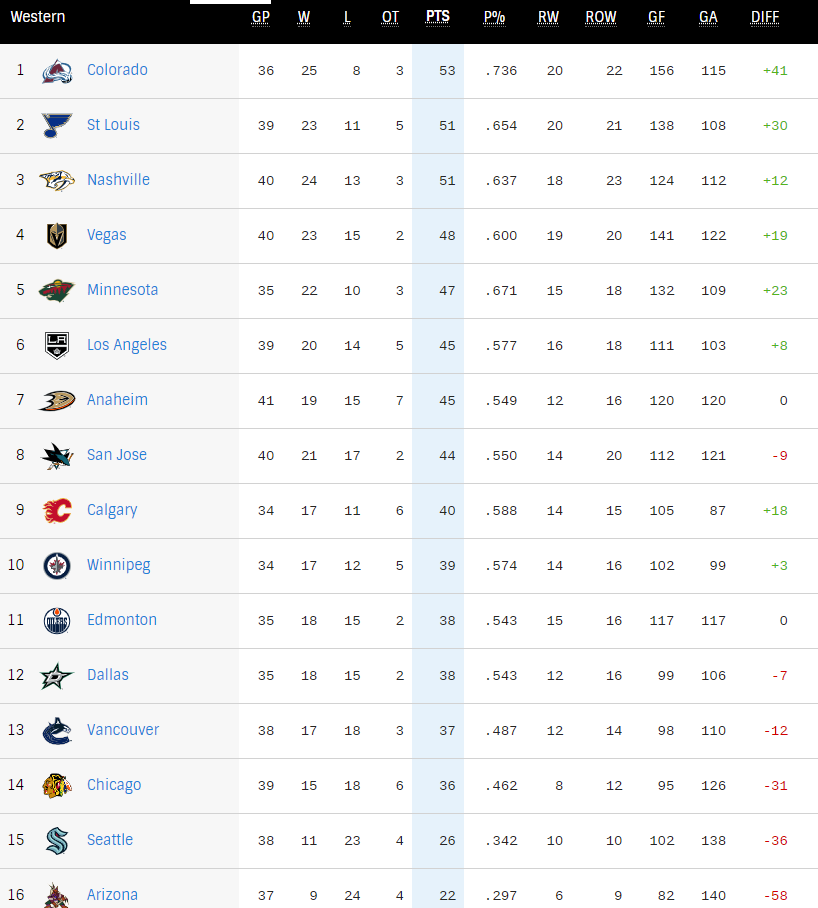 The games played makes the point totals of the Ducks look like they have more of a lead than they do. The race for second and third in the Pacific and the final two wild card spots seven teams points% ranging from .588 to .543, which is essentially a two-point lead. Anaheim and San Jose might benefit from having played 41 and 40 games respectively as they will have more rest down the stretch than Calgary, Winnipeg, Edmonton and Dallas who have played 34 and 35 games. I find it hard to understand how one conference can have no playoff race and the other has seven teams battling for three spots. Rare to see such a disparity.
— I’m curious to see how the new schedule looks for teams. Calgary, Edmonton and Vancouver have to reschedule 10, nine and seven games respectively. The Flames have eight home games, Vancouver has six and Edmonton has five. Edmonton and Calgary will likely have a very condensed February. But they can’t fit all their games in then.
Edmonton plays in Washington on February 2nd. All Star weekend is from the 4th-6th. So they won’t play any games that weekend and I can’t see them playing on the 7th. Maybe they have to, but asking the superstars of the NHL (well not all due to NHL’s every-team-has-a-representative-rule) to play the AS game Sunday and then a regular season game Monday would likely not be well received. So that would give Edmonton 14 days to fit in some of its games. Packing all nine in a 14-day window is possible. They could play on the 8th, 9th, 11th, 13th, 15th, 16th, 18th, 20th and 21st for instance. Then they would travel to Tampa Bay on the 22nd and play them on the 23rd.
I’m hearing they won’t do all nine games in February, but will try to fit eight in and slot the Edmonton/Calgary game later in the season. What I don’t understand is why the NHL can’t just extend the regular season one week. I understand they want to get back to a normal “hockey schedule,” but cramming in this many postponed games seems a bit overzealous.
— Help me understand why the NFL still gives a rest advantage to playoff teams. I firmly believe they will expand to 16 playoff teams soon and have 1 v. 8 in each conference. They took the first step adding a seventh team in each conference and it is only a matter of time before they go to 16. They’d be better off to just do it now rather than wait another year or two.
— Do you watch the show, Goliath? I really enjoyed the first few seasons, but the first two episodes of season four have really turned me off with the constant dream sequences. Help me understand if it is worth finishing it, or should I just walk away now and avoid further disappointment?
— Yesterday @Timo Meier became the 34th player to score five goals in a game since 1940. He is the first Sharks player to score five. Only Bryan Trottier (2), Mario Lemieux (3), and Wayne Gretzky (4) have done it multiple times. Meier had five goals through 40 minutes and had a few good chances in the third period, but Darryl Sittler (1976), Red Berenson (1968), and Syd Howe (1944) are the only players to score six goals in a game in the past 82 years.
For fun, can you name the only defenceman to do it? He scored his five goals on five shots.