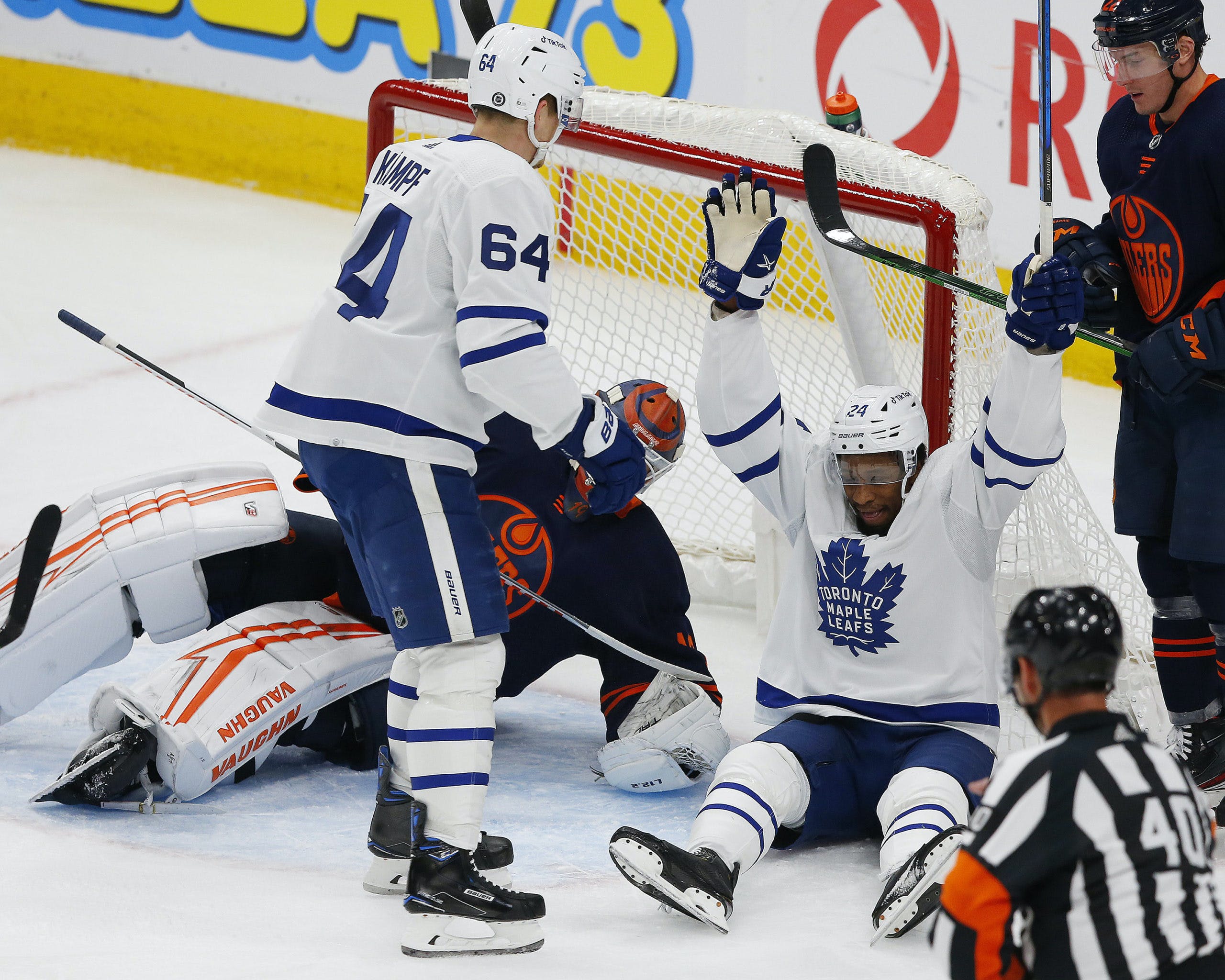 Photo credit: Perry Nelson-USA TODAY Sports
By Jason Gregor
10 months ago
Comments
The Edmonton Oiler were 3-6-1 against the Toronto Maple Leafs in 2021. Connor McDavid played all 10 games. So did Ryan Nugent-Hopkins and Tyson Barrie. All three of them, and Derek Ryan, are out of the lineup tonight as the Oilers face the hottest team in the NHL.
On paper it doesn’t look promising, but the game is played on the ice, and if the Oilers want to avoid going winless on their five-game road trip then every player will need to be prepared to play up to their capabilities tonight.
It starts in goal. Mike Smith has to be much better than he was against New Jersey. I don’t really buy into the theory he was rusty after being off for two months.
Last season Smith made his season debut on February 8th, almost 11 months after his previous regular season game on March 11th, 2020. He played a grand total of 26 minutes in August. So a total of 26 minutes in 11 months. He had no preseason last January, yet he was excellent when he returned.
Advertisement
Ad
Advertisement
Ad
It might not be fair, but he’s shown he doesn’t need many games to play well. He just needs to play solid. I don’t expect him to post a shutout or stop every high-danger chance, but he needs to play better than he did in New Jersey. If not, the Oilers’ odds of winning tonight are very low.
And the 18 skaters in front of him need to make a solid effort in front of him. They can’t commit the 10-bell error that has occurred far too often this season, and expect to win. Play with desperation. Go to the net. Cause havoc. Force the Leafs to take a penalty by playing fast, moving the puck quickly, keeping your feet moving in the corners and taking the puck to the net. Edmonton hasn’t done enough of that lately. You can’t just wait for teams to take a lazy tripping or holding penalty to get a power play. Force them to take some penalties.
Advertisement
Ad
Advertisement
Ad
No question tonight will be a big challenge for the Oilers being without McDavid. He’s the most dynamic player in the game, and can score at any moment. But many teams have won games without their best players. The Pittsburgh Penguins have done it for a decade without Sidney Crosby and Evgeni Malkin.
Since 2012 Malkin has played seasons where he’s missed 31, 25, 23, 22, 20, 17, 14, 14 and 13 games.
In that span Crosby has missed 60, 41, 22, 14, 12 and 11 games in a season.
Yet the Penguins find ways to rally without them in the lineup. It is very impressive.
The Oilers don’t play again until Monday, so McDavid will likely only miss one game. No doubt the Oilers roster tonight doesn’t have the same skill level as the Maple Leafs. The Oilers are losing McDavid, while Toronto gets Auston Matthews back in the lineup. But McDavid’s absence isn’t an excuse not to play hard. Hard work can defeat skill. We’ve seen it happen in single games and in playoff series over many decades. There is no reason the Oilers can’t put worth a strong effort tonight. If they don’t, it could get ugly quickly.
Advertisement
Ad
Advertisement
Ad

Foegele – Draisaitl – Yamamoto
Hyman – McLeod– Puljujarvi
Benson – Shore – Kassian
Perlini – Sceviour – Turris
Nurse – Bouchard
Keith – Ceci
Lagesson – Koekkoek
Smith
Smith will start. The lines and D pairs are a “best guess” on my part. With McDavid out, bumping McLeod up makes the most sense. The bottom six could be configured another way, but that’s how I’d start them. I think the top-two defence pairs will play a lot tonight, especially with the Oilers not playing again until Monday. They can rest over the next few days.
Maple Leafs
Bunting – Matthews – Marner
Kerfoot – Tavares – Nylander
Engvall – Kampf – Mikheyev
Ritchie – Spezza – Simmonds
Reilly –  Brodie
Muzzin – Holl
Sandin – Dermott
Campbell
Matthews returns to the lineup and only Kase and Liljegren are unavailable for Toronto. The Leafs have been on fire for the past two months going 19-4-1. They are rolling and are the heavy favourites heading into tonight. It would be a major upset if Edmonton finds a way to win.
Advertisement
Ad
Advertisement
Ad

The Leafs will ice a very similar lineup to the one that put a beating on the Senators this past weekend. The only changes up front are Pierre Engvall slotting back onto the third line alongside David Kampf and Ilya Mikheyev in the absence of Kaše, with Ritchie rejoining Jason Spezza and Wayne Simmonds on the fourth line.
Timothy Liljegren returned to practice on Monday after being removed from the COVID-19 list but after a strong defensive effort from the group on Saturday, and with Jake Muzzin also set to return to the lineup, Liljegren will have to await an opportunity to get back into the lineup. The young blueliner has taken a significant step forward this season and has shown he can handle regular minutes but having depth on the back end – especially in the world we’re currently living in – is a good thing and it shouldn’t be long before Liljegren gets back into a game.
In addition to McDavid, the Oilers will also be without Derek Ryan and Tyson Barrie who were placed in the league’s COVID protocol. Wednesday will also mark Zach Hyman’s return to Toronto and while the Leafs will surely acknowledge his tenure with a video tribute of some kind, fans will have to wait to show their appreciation to the former Leaf at a later date.