Highlights and Numbers: A stellar performance from Mikko Koskinen gets Edmonton back in the win column 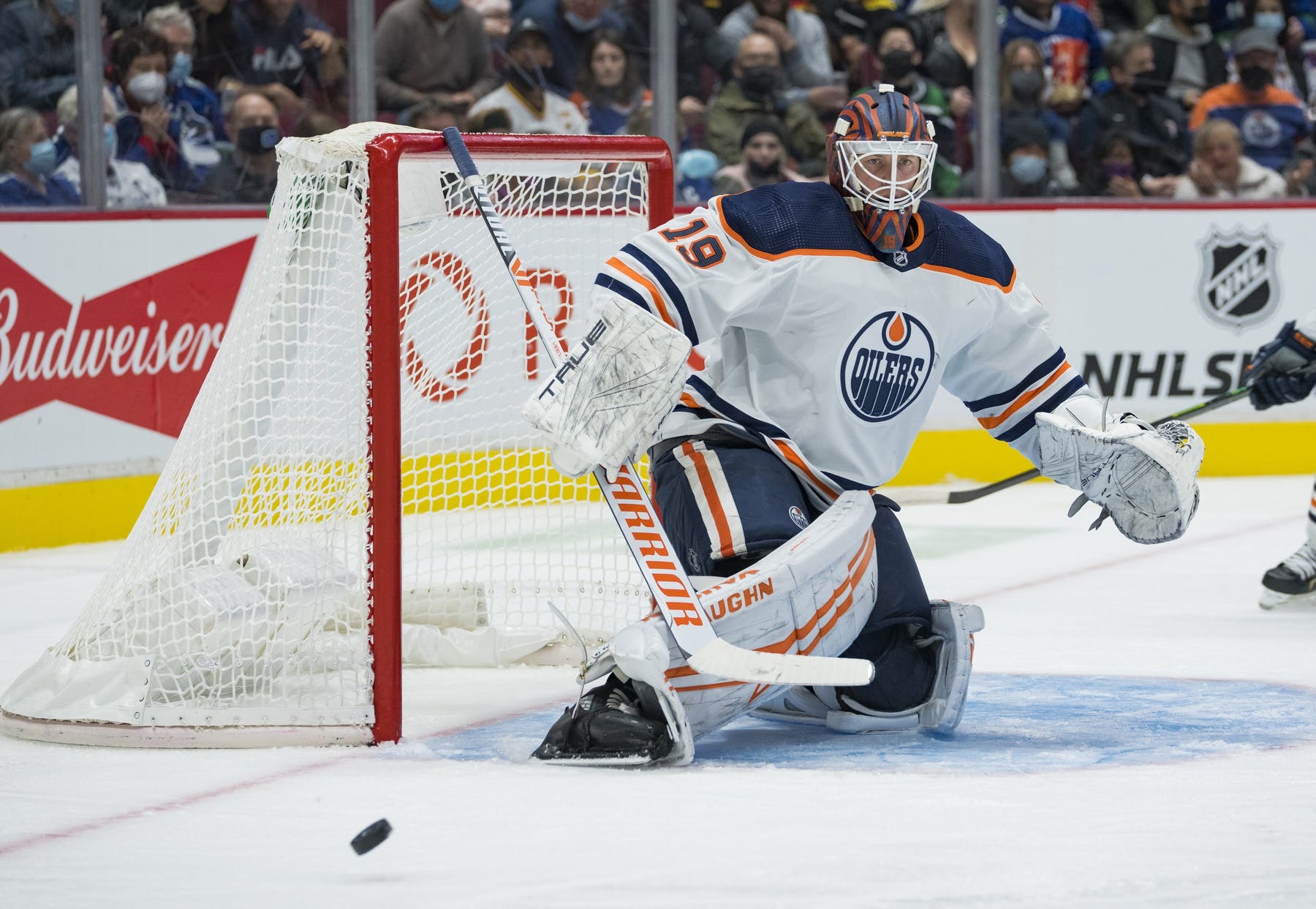 By Cam Lewis
1 year ago
That was a huge performance from Mikko Koskinen.
After a difficult showing in Edmonton’s 5-3 loss to the Philadelphia Flyers on Wednesday, Koskinen bounced back and helped the Oilers get back into the win column in Vancouver.
Canucks goaltender Thatcher Demko has been an ace early in the season so goals were inevitably going to be hard to come by for the Oilers on Saturday. Edmonton needed Koskinen to stand tall, and that’s exactly what he did.
The Big Finn stopped 29 of the 30 shots Vancouver threw his way and he narrowly missed recording his first shutout of the season as Brock Boeser put the Canucks on the board with just seven seconds left on the clock.

It was Edmonton’s second power-play unit that got things going just over halfway through the first period.
Kyle Turris dragged a Vancouver penalty-killer towards him and then fed a nifty backhand pass to Evan Bouchard, giving him all the time in the world to get set up at the point. Bouchard then passed the puck over the Darnell Nurse who fired a quick, low wrist shot towards the net that Demko couldn’t properly handle. Warren Fogele, who was one of the two Edmonton forwards parked in front, swept the puck into the open net to give the Oilers a 1-0 lead.
How many times have we seen this one now?
The top power-play unit gave Edmonton a 2-0 lead with under a minute to go in the second period. Connor McDavid tried to get a puck through to the net but it was blocked by Vancouver’s defender. Supporting the play was Ryan Nugent-Hopkins, who grabbed the puck and immediately fired it over the Lean Draisaitl in his office for a one-time snap past a diving Demko.
To his credit, Demko made it across the crease very quickly and almost came up with the puck. The fact this went in is a testament to how quick and perfect RNH’s pass was and how good of a shooter Draisaitl is. This power-play unit is something else.
Let’s look at some Koskinen highlights because, in my mind, this was his best start of the season. Koskinen looked huge in the net and was a complete rock all game. Even when he found himself out of position, Koskinen dove back in and made some beautiful saves to keep Vancouver off the board.
It was great to see Koskinen have a bounce back after that tough start against Philly earlier in the week. The challenge that Koskinen has had throughout his career is playing well while taking on a large workload. It seems that he gets fatigued and he becomes prone to allowing soft goals.
But, after allowing four goals, a few of them very soft, on 33 shots against the Flyers, Koskinen came back against Vancouver and looked like a completely different goaltender. In previous years, we’ve seen Koskinen get tired from a large workload, have a bad game, and spiral afterward, so it’s a huge positive that he came right back out after that bad outing and played as well as he did. 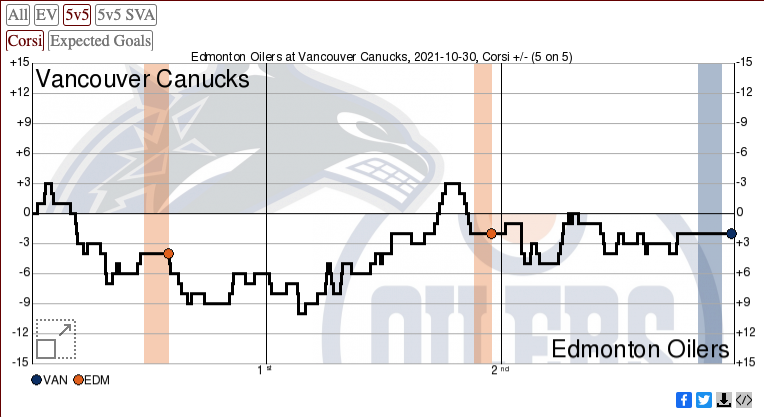 Vancouver took two penalties on Saturday night and the Oilers capitalized on both of them. For the season, the Oilers are scored on 11 of 23 power-play opportunities, good for a 47.8 percentage. Their power-play last year was incredible, scoring on 27.6 percent of opportunities, and it looks even better this year.
There’s a good chance we’ll see this team have the best power-play percentage in NHL history this year. The current record is 31.9 percent by the 1977-78 Montreal Canadiens. The 2019-20 Oilers, who scored on 29.5 percent of their chances, rank fourth all-time.
Some other things to note…
Evan Bouchard has taken his opportunity on the team’s top pairing and is running with it. Bouchard logged a season-high 24:19 on Saturday night and the Oilers outshot the Canucks 27-to-14 and dominated in terms of high-danger chances 6-to-1 in the 22 even-strength minutes he was on the ice.
I think many of us expected to see Bouchard evolve into a top-pairing role at some point this season, but I’m not sure anyone saw it happening this quickly.
Edmonton’s second line had a rough outing on Saturday. The Leon Draisaitl, Ryan Nugent-Hopkins, and Kailer Yamamoto trio that had been so good in the past struggled to get anything going.
In 14:22 with this trio on the ice at even-strength, Vancouver outshot the Oilers 14-to-6 and had nine scoring chances to Edmonton’s two. The first and third lines were both good, but the Oilers need to find a way to get the second line going. Yamamoto doesn’t have a point through seven games this season.
The Oilers are now 6-1-0 on the season. They rank second in the Pacific Division, one point behind the Calgary Flames who are rolling on a six-game winning streak in which they haven’t trailed once. Edmonton will play three home games this week, including their first-ever against the Seattle Kraken on Monday, before hitting the road for a five-game road trip.
News
Post Game
Recent articles from Cam Lewis