How does Edmonton’s start compare to the rest of the Pacific Division?

By NHL_Sid
1 year ago
With a win against Seattle on Wednesday night, the Edmonton Oilers began their first nine games with an 8-1 record, a feat unmatched since 1985. Following their victory last night during perhaps the most entertaining game of the year, they officially won 9 of their first 10 games in a season for just the first time in franchise history. They’re currently 1st in the Pacific Division and tied for 2nd in the entire league.
Before the season started, many (including me) predicted the Vegas Golden Knights to be atop the Pacific Division. However, they’re currently just fifth; the loss of many of their key players to injuries, such as Mark Stone, Max Pacioretty, William Karlsson, can’t be understated. They’ve even been forced to deploy Brett Howden as their top center for several games.
The recent acquisition of Jack Eichel obviously changes things for the organization, but not in the short term. He’ll only be ready to play in February or March at the absolute earliest. With all their injuries, their hopes of finishing in the top 2-3 are in jeopardy.
In this piece, I’ll compare Vegas, Edmonton, and every Pacific Division team’s season thus far in a variety of aspects. I’ll be analyzing each team’s even-strength play, finishing, goaltending, and special teams.
*All stats via Natural Stat Trick unless stated otherwise

Thus far, Edmonton has been the best offensive play-driving team in the Pacific Division and is currently top 5 in the league. This is largely (and quite obviously) due to Connor McDavid, but Edmonton’s third line and the emergence of Evan Bouchard have also contributed to these results.
However, Vegas has also excelled in this facet of the game; their strong results have come despite numerous injuries. Players like Nicholas Roy and Evgeny Dadanov have stepped up and have been solid offensive play-drivers so far.
Calgary has shined at generating quantity, but have been pretty average in creating high-quality chances. Los Angeles is the opposite; their high-quality chance results are 1st in the division, largely due to strong play by Anze Kopitar and Adrian Kempe. Meanwhile, Vancouver has been below-average in both. Several of their top players, most notably Elias Pettersson, have struggled mightily to begin the season.

What about the opposite end of the spectrum?
Calgary has thrived defensively under Darryl Sutter’s system, as they’ve been among the league’s best shot and scoring chance suppressors in the league. The addition of Blake Coleman, along with the continued shut-down prowess of Chris Tanev, have been major factors in these results. Seattle and San Jose have also performed pretty well in preventing chances.
Vegas has been the league’s worst defensive team so far. Injuries to many of their top two-way players, such as Stone and Pacioretty, have quite obviously hurt the Golden Knights. Additionally, Alex Pietrangelo has had a dreadful start to this year. With Pietrangelo on the ice at 5v5, Vegas has been outscored 7/10 (a differential of 41%) and high danger chances have been 29/56 (a differential of 34%).
As for Edmonton, they’ve been relatively high-event when it comes to scoring chances. One of the numerous reasons for this is a poor start by Tyson Barrie, but Edmonton’s bottom 6 hasn’t helped either. Although Edmonton’s depth forwards have started scoring and generating more, they’ve also allowed many chances against. Most notably, Shore and Turris have struggled a lot in this aspect. However, the third line hasn’t been remarkable as of recent either despite a hot start; the trio of Foegele – Ryan – Kassian has been outscored 3/6. It’ll be interesting to track their progress as the season goes on. 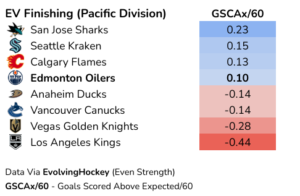 Generating scoring chances is an important skill, but to what extent do these teams excel at finishing or capitalizing on the chances they create?
Edmonton has finished a bit more than expected at even-strength. McDavid, Draisaitl, and Hyman have been scoring at a lofty rate and are among their best finishers. Nugent-Hopkins, however, has struggled in this facet of the game. That being said, Nuge has been a play-making wizard, as he’s currently 1st in the league in assists.
As for the rest of the Pacific, San Jose has capitalized on chances at a higher rate than any other team in the division. This is mostly due to the goal-scoring success of Dahlen, Hertl, and Karlsson. Calgary has also excelled in this area; Mangiapane and Lindholm have had excellent starts to the season and are among the top 10 in the league in goals. 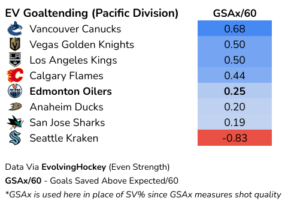 Every team in the Pacific Division has had at least above-average goaltending, with the exception of Seattle, who’ve had the worst goaltending out of every team in the NHL thus far. Philip Grubauer has not adjusted well to his new team, while Joey Daccord hasn’t performed as a reliable backup at all. I’m sure they’re eagerly awaiting Chris Driedger’s return from injury, which should help.
Vancouver has received the best goaltending in the division, as a result of strong play by Thatcher Demko. Los Angeles and Calgary don’t rank far behind either, as Jonathan Quick and Jacob Markstrom (respectively) have vastly improved their play as opposed to last year.
Although he could have been better last night, Mikko Koskinen has had an exceptional stretch of games in the absence of Mike Smith for the Oilers. Following a poor campaign last year, Koskinen currently owns a 0.917 SV% and a 2.0 GSAx in 8 games.
Additionally, it’s interesting to see that Robin Lehner has been solid so far, despite playing behind an injury-hampered team with the worst chance suppression metrics in the league. 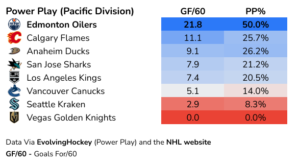 To say that Edmonton’s power play has been good so far is a massive understatement. Their Goals For/60 is close to double the 2nd best power play in the Pacific. Since 2007, no team has scored above a rate of 11.5 GF/60 on the power play, so while Edmonton’s current GF/60 of 21.8 can’t be sustained, the odds they break records is relatively high.
Most of the rest of the Pacific have been above-average on the power play. Both Calgary’s and Anaheim’s PP have seen a significant improvement compared to last year. It’s strange to see two defencemen in Kevin Shattenkirk and Cam Fowler lead the Ducks in PP points.
Vegas remains the only team in the league without a power-play goal. Mark Stone, Max Pacioretty, and William Karlsson were among the top 4 most productive players on the man-advantage in Vegas last season, so their absence is clearly being felt. 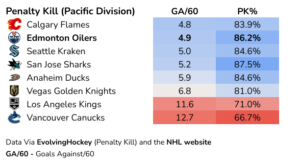 The Oilers’ penalty kill also ranks pretty high in the Pacific, just behind Calgary when it comes to GA/60. I think it’s pretty evident that special teams have been the primary driving force behind Edmonton’s recent success.
Vegas ranks dead last in the league in both shot attempts against/60 and expected goals against/60 while short-handed. However, relative to the chances they’ve been allowing against, Lehner has managed to be even better on the penalty kill. He’s been a large reason for why Vegas hasn’t fallen further behind.
It’s interesting to see Los Angeles’s short-handed struggles this year following 20-21, a year in which they had a better PK GA/60 and PK% than Edmonton.

It’s refreshing to see Edmonton begin the season with such a prominent record. However, their even-strength goal differential is just +3, which is lower than Calgary, the same as Los Angeles, and just +1 higher than Vancouver and San Jose. Additionally, Edmonton’s shot and scoring chance metrics have been painfully average. Moving forward, there’s lots of room for Edmonton to improve as a 5v5 team, especially on the defensive side.
Regarding each team’s playoff hopes, I don’t see Seattle making it in. Los Angeles will need to see quite a lot more improvement in their forward depth and special teams if they want to qualify.
Calgary has had a superb start to the season. Though they’re currently top 5 in the league, I don’t see them sustaining that pace. Still, I do think they’re a safe bet to qualify for the playoffs.
Anaheim and (especially) San Jose have been better than I expected, but I still have my doubts on if they’ll eventually qualify.
Vancouver will need several of their best players such Elias Pettersson and JT Miller to play a lot better; they’ve had a very poor start. The Canucks will also require a superior penalty kill.
In spite of their injury problems, I think Vegas will recover to make the playoffs. Of course, the odds of them finishing 1st place, like many expected, seem relatively low at this point. Vegas’ injured players won’t be in full health extremely soon. Stone’s injury timeline is unclear, Pacioretty will be ready at some point in December, and Karlsson will still require several more weeks.
Consequently, I think it’s safe to say Edmonton has the best odds to win the Pacific Division as of now. Hopefully, we can see improvement in their 5v5 play, but also a continuation of their strong special teams. Do you think Edmonton will eventually finish 1st in the Pacific? What other Pacific Division teams do you think will make it into the playoffs?
Find me on Twitter (@NHL_Sid)
Nation Takes
Oilers Talk
Recent articles from NHL_Sid