How Many Points Will McDavid and Draisaitl Produce This Season By Jason Gregor
3 months ago
Connor McDavid and Leon Draisaitl have scored the most points in the NHL over the previous four seasons. McDavid leads with 441 points and Draisaitl is second with 409. No other player has 400+ points. Patrick Kane is third with 352 points, followed by Jonathon Huberdeau at 346 and Nathan MacKinnon at 345. Nikita Kucherov is in the same vicinity when it comes to points-per-game with 1.43, while McDavid is at 1.59 and Draisaitl is at 1.42, but Kucherov has played 92 fewer games than Draisaitl and 81 fewer than McDavid.
I included the previous four seasons because I wanted two full NHL seasons as a reference point when it comes to projecting point totals for McDavid and Draisaitl this season. Here is a look at their previous four seasons.
2022:
McDavid averaged the most shots/game of his career at 3.93 as did Draisaitl at 3.47. Their SH% was close to their overall average over the past four seasons, so their goal totals weren’t due to going on heaters.
2021:
McDavid went nuclear in this 56-game shortened season. While some tried to say it was due to competition, none of the Canadian teams were in the top-five highest scoring teams this year. In fact the Canadian division was third in goals/game.
2020:
Draisaitl won the Hart, Art Ross and Ted Lindsay in 2020. In the seven games McDavid didn’t play Draisaitl produced 13 points.
2019:
The last season neither of them won the scoring race as Kucherov won with 128 points.
Here are their combined totals over the past four seasons.
Draisaitl has the best SH% in the NHL among players who played at least 50 games over four seasons. Even when he shot more, last year, his SH% was still 19.8%.
It is interesting to note that while scoring was up across the NHL last season, neither McDavid or Draisaitl had a career-best in points-per-game. McDavid actually had the lowest SH% at 5×5 of his career last year at 10.63 at 5×5. In 2021 it was 14.73, in 2020 it was 14.69 and in 2019 it was 15.29.
His shots/game were up slightly at 2.58 from 2.30 and 2.23, but in 2018 when he set his career-high at 5×5 with 30 goals he had 206 shots. He had 207 last year with 22 goals. Odds suggest if he continues to shoot around 2.58 shots/game he will score more than 22 goals at 5×5 this coming season.
McDavid is at the beginning of his prime, and if he plays at least 80 games then 120 points is his minimum. McDavid’s offence jumped up significantly when Jay Woodcroft and Evander Kane arrived. In 38 games under Woodcroft, McDavid scored 21 goals and 62 points and a 1.68 PPG average. But I think that had more to do with the time of the season than a new coach or linemate. McDavid always scores more in March and April than he does in December and January. In the middle of the season, McDavid has averaged 1.26 PPG over 129 games in December and January, but in 131 games in March and April he’s averaged 1.59 PPG.

When you look at the past four seasons, the skill on the Oilers wings and an elite power play, McDavid and Draisaitl should be at minimum 120 and 110-point players. I know some people scoff at those totals and suggest those are obvious totals, but remember only four other players have scored 110 points once over the past four years. It is extremely difficult to score 110 points one time, never mind repeatedly.
With that being said, I see McDavid setting another career-high in points. He, and Draisaitl, took their games to another level in the playoffs. McDavid is incredibly driven, and he wants to keep improving his overall play.
I believe he will be the first player to score 130 points in a season since 1996. He finishes the season with 131 points. I think Draisaitl, who has only missed two games the past four seasons, will also set a career-high. He finishes with 116 points. 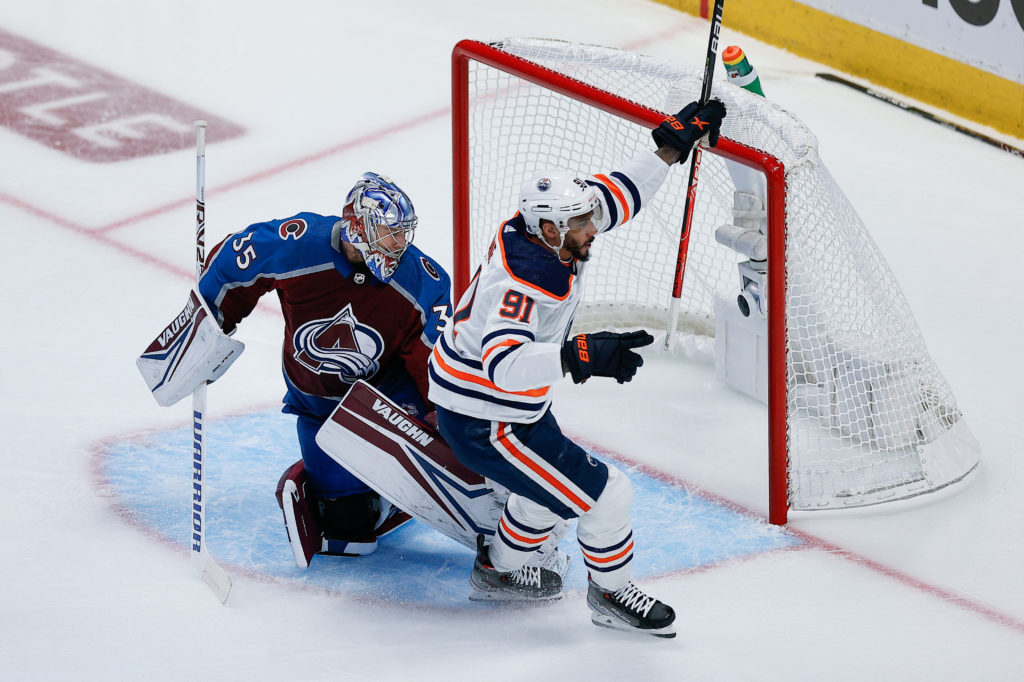 May 31, 2022; Denver, Colorado, USA; Edmonton Oilers left wing Evander Kane (91) scores a goal against Colorado Avalanche goaltender Darcy Kuemper (35) in the first period in game one of the Western Conference Final of the 2022 Stanley Cup Playoffs at Ball Arena. Mandatory Credit: Isaiah J. Downing-USA TODAY Sports
Offence across the NHL was the highest we’ve seen since 1996. I’d love to see more this season, but I sense it will slide back a bit. Last year’s games averaged 6.21 goals/game. I’m only counting actual goals, not shootout goals. The league had 8,150 goals in 1,312 games. I could see it hover around 6.00 which would be 7,872 goals. But that is still higher than most seasons in the past 25 years.
Here is a quick look at the top-five scoring teams in each of the past four seasons.
Edmonton was 20th in G/GP in 2019 at 2.79/game and 14th in 2020 at 3.14.
The Oilers were seventh in 2021 at 3.27 and tied for seventh with Tampa Bay last year at 3.48 G/GP. Edmonton’s overall offence has improved in each of the past four seasons, and last season McDavid and Draisaitl were in on 43.1% and 38.6% of the Oilers’ goals. That is the lowest % for either player in the past four seasons. McDavid was at 50.6% in 2019, Draisaitl was at 49.3% in 2020 when he led the league and in 2021 McDavid factored in on 57.4% of the Oilers’ goals.
Despite McDavid and Draisaitl being first and fourth respectively in league scoring, they were in on a lower % of the teams’ goals. The Oilers’ depth scoring has improved, and if that continues this season the Oilers might finish top-five in goals/game.
Offence won’t be a problem for the Oilers, and if their goals against can come down, then the Oilers should finish first in their division for the first time since 1987.