How Realistic is a Kane or Toews trade to the Oilers? 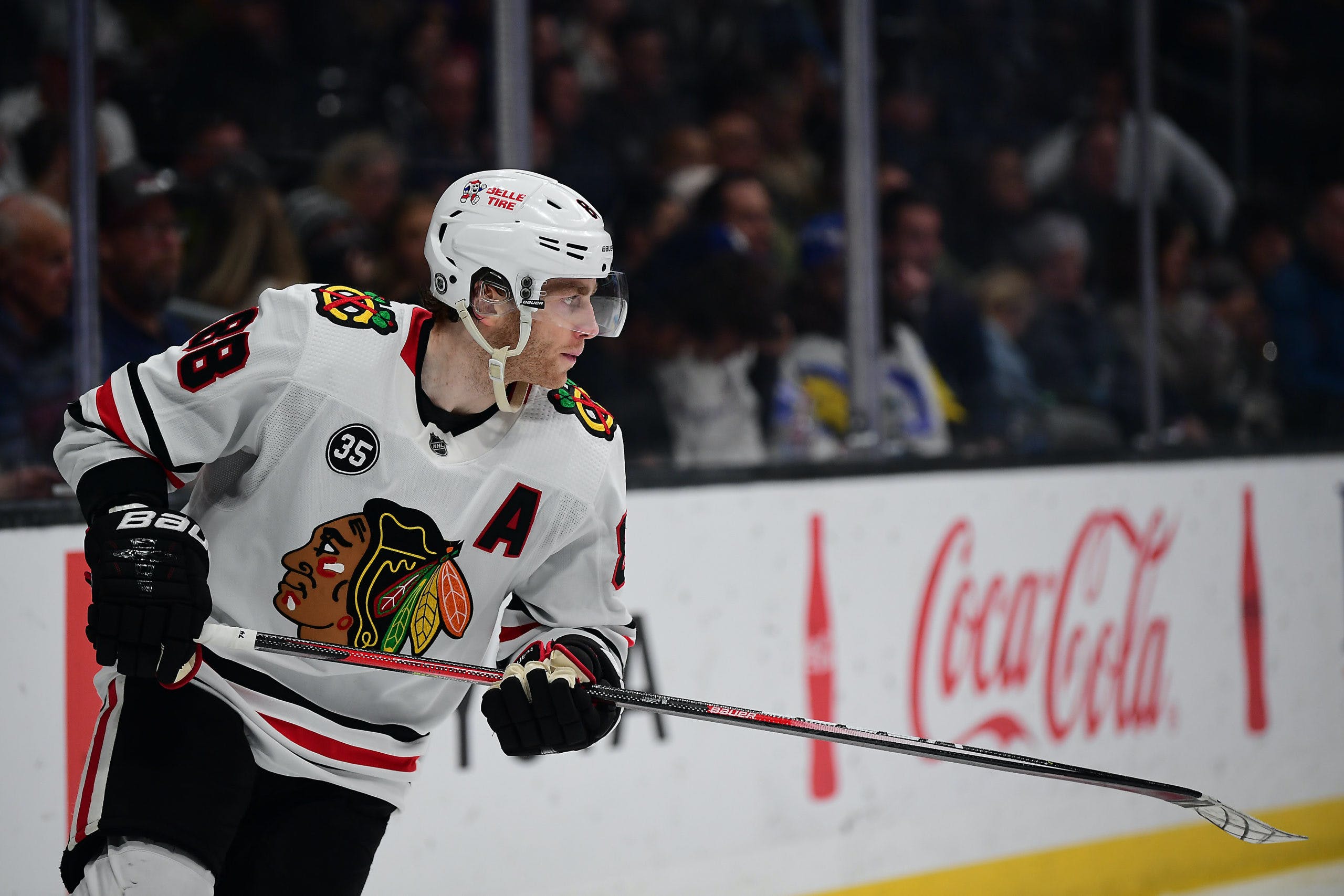 By Tyler Yaremchuk
3 months ago
The Oilers are in Chicago to take on the Blackhawks tonight and well the Oilers are firmly in a window where they plan on competing for the Stanley Cup, the Blackhawks are far from it. This is the first full season of what will be a complete teardown.
Over the summer they traded away Kirby Dach and Alex Debrincat, who were both established NHLers under 25 years old and now it’s really just a matter of time until they move on from their two franchise cornerstones: Patrick Kane and Jonathan Toews.
Would either be a good fit for the Oilers? Yesterday on Oilersnation Everyday, I asked NHL Insider Frank Seravalli point blank, what are the chances that there is a future Oiler sitting on that Blackhawks roster right now?

“Probably pretty small I would imagine,” said Seravalli “you’re talking Patrick Kane and if we were to handicap it at this point, like a 10% chance maybe? I don’t know that everyone in the Oilers front office as much as they may be intrigued by the idea is all that sold on the idea that he’s the ideal fit for this team moving forward”

I then asked him about Toews and whether or not he makes more sense.

“Honestly, I think there are some that think he makes more sense as a fit. I don’t know if he’s interested and that’s the thing you have to weigh out with Kane and Toews. They both hold all the keys in terms of where they go or frankly don’t go. They have to be intrigued and interested in the opportunity. On a short-term basis, I don’t know who wouldn’t be intrigued or interested in the opportunity to play on a team with 97 and 29 given what they accomplished in the playoffs. If that’s going to be the case again, they’re going to be knocking on the door of a Stanley Cup.”

My co-host Jay then asked if Duncan Keith could maybe influence one of Kane or Toews. Frank seemed to think that was possible.

Players always want to know and players talk. The interesting part is that these conversations occur now or in the summer, like “hey, what’s it like in Edmonton, how was the coach? What was the team like? How was the room? Is it a good enough place to live or hang your hat for bit? I wouldn’t be surprised if some of that groundwork was already laid by someone like Duncan Keith.”

I actually agree with the idea that Toews might be a more realistic target than Kane. The acquisition cost on Kane will likely be much higher and honestly, the Oilers don’t need another high-scoring winger. Yes, it would make them better, but Toews could come in and help round out their top nine and since he wouldn’t cost you as much to bring in, you could still go out and get an impact blueliner too.
Think of it like this, who makes the Oilers tougher to beat in the playoffs: just Patrick Kane or a combination of Jonathan Toews and another Brett Kulak-esque defenseman.
For most teams, the answer to that question is Kane and there’s absolutely no denying that he would make the Oilers significantly better. But Edmonton didn’t lose to Colorado because they didn’t have enough firepower. Having a third line that could dominate the opposition and three pairings that can all hold their own in the d-zone would make the Oilers a very tough out in the playoffs.
Maybe that’s a bit of an old-school take from me, but I believe the Oiler’s top six is good enough to go on a deep run. Adding Kane would give them an embarrassment of riches, but there might be better ways to spend their assets.
Toews is also off to a tremendous start to the season as well with three goals through his first six games.
Frank also outlined another player who he thinks would be an intriguing fit in Oil Country.

“I could see Bo Horvat being a really smart fit for the Oilers… even on an expiring contract, I think it could make a lot of sense, even without the guarantee of him resigning longer term. He would really add a dimension to your team and make you so much harder to play against”

The Canucks are in shambles right now and Horvat has made some really interesting comments publicly. Like Toews, he would make the Oiler’s third line much harder to play against. That wasn’t so much insider info from Frank either, so it shouldn’t be taken that way. He was more or less just saying that a Horvat-type would make a lot of sense for this Oilers team.
We haven’t spent a lot of time talking about it, but could finding a high-end third-line centre be a move that the Oilers aggressively pursue ahead of the trade deadline? It certainly sounds like it’s on their mind. Rounding out this forward group and creating a top nine that is always pushing the puck in the right direction could really bring this Oilers roster to the next level.
I’m going to be continuing this conversation today on my daily live show, which you can watch every weekday and game day at noon mountain time on The Nation Network YouTube page, so tune in for that. Also, for tonight’s game against the Blackhawks, I’ll be going live for a little Oilersnation watch along on our channel, so join me for the game!
Editorials
Featured
Oilers Talk
Recent articles from Tyler Yaremchuk