How Zach Hyman has been a big part of Edmonton’s playoff success, and a splendid fit with the Oilers overall By NHL_Sid
8 months ago
The Edmonton Oilers are officially heading to the Western Conference Finals for the first time in sixteen years.
It was an entertaining and thoroughly satisfying 5-4 victory (for Oilers fans) in Game 5 on Thursday night, which featured a chaotic moment where both teams scored a combined four goals in merely 1:11, and also a controversial disallowed goal by @Blake Coleman. The goal is debatable, but regardless, it’s safe to say Calgary was the 2nd best team on the ice.
@Connor McDavid continued his magic with the eventual OT winner, and @Leon Draisaitl also continues to be phenomenal.
Playing on essentially one ankle, Draisaitl has tied McDavid for the playoff point lead, with a whopping 17 points in just 5 games in this series, a remarkable and otherworldly rate of production. He’s broken records that even Gretzky didn’t achieve, and I think it’s an understatement to say that Draisaitl is often shadowed by McDavid’s brilliance.
Although they’re the primary leaders of the team, nearly every player on the entire squad played some sort of effective role in this series. One of the more significant contributors aside from McDavid and Draisaitl?

@Zach Hyman.
Hyman was on-ice for all five of Edmonton’s goals in their 5-4 win, and he finished the game with a goal, two assists, and a 56.9% expected goal share.
In a passionate fanbase where there’s constant discourse and debate over the value of certain players, it seems that the majority of fans are united on the value that Hyman brings. It’s evident why he’s such a fan favorite.
Signed to a 7-year, $38.5M contract this off-season with an AAV of $5.5M, this is Hyman’s first year in Edmonton after spending six years with the Toronto Maple Leafs. After signing with the Oilers, Hyman was quite aware of the team and fanbase’s desire for playoff success.
“There definitely are parallels,” Hyman said back in September when asked about Edmonton and Toronto’s prior playoff failures. “Just from a hunger standpoint, this young group is hungry to win. That’s the same situation I was coming from in Toronto.
“We were coming off a bunch of first-round disappointments, no different than here with the losses to Chicago and Winnipeg. This group wants to take the next step. They’re eager to take the next step.”
So far, as they qualify for the WCF and prepare to face the Colorado Avalanche, the Oilers have indeed taken that next step, with Hyman occupying a major role in their success.
In 76 regular-season games, Hyman produced 27 goals and 27 assists, for a total of 54 points. Thus far in the playoffs, he has eight goals and four assists, for a total of eleven primary points and twelve total points in twelve games. His playoff Points/60 of 2.96 ranks 19th in the league (among players with a minimum of 150 TOI). 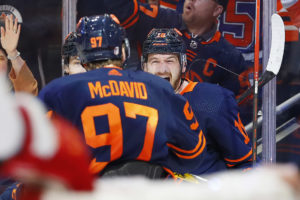 May 24, 2022; Edmonton, Alberta, CAN;The Edmonton Oilers celebrate a goal by forward Zach Hyman (18) against the Calgary Flames during the first period in game four of the second round of the 2022 Stanley Cup Playoffs at Rogers Place. Mandatory Credit: Perry Nelson-USA TODAY Sports
Six of his total eight goals have come in the second round against Calgary, as Hyman scored in each of the five games in the second round.
Going beyond the box-score totals, Hyman also excels at driving scoring chances, especially high-quality ones.
Behind Connor McDavid and Jesse Puljujarvi, Hyman ranked third among the team’s forwards in expected goal differential at 5v5. His impact on average shot quality (xGF/FF – xGA/FA) ranks second on the team (behind McDavid, marginally ahead of Puljujarvi). He has a 49 xGF% without McDavid, which seems unimpressive on paper, but it’s quite good relative to the rest of the team.
Last season, he ranked first among all Toronto players with an excellent xGF% of 59%, placing higher than both Auston Matthews and Mitch Marner. Throughout his entire career, his ability to drive shots and chances at a high rate, while not surrendering a lot against, has been arguably his most valuable on-ice skill.
To dive even deeper into his performance and skillset, earlier, I scraped some 5v5 shot data for every forward using the NHL’s official play-by-play data. To be more specific, I scraped deflections, tip-ins, and rebounds (I defined a rebound as any shot attempt within four seconds or less of another shot attempt, without a stoppage of play in-between).
The objective of this was to determine the best net-front presences in the NHL; although “screens” data is publicly unavailable, it’s reasonable to statistically define an effective net-front presence as a player that generates a high volume of shots near the net-front areas.
In the past two seasons, Hyman ranks in the 74th percentile in Deflections, 81st percentile in Tip-Ins, and in the 92nd percentile in Rebounds; in simpler terms, he generates more deflections than 74% of the league, more tip-ins than 81% of the league, and more rebounds than 92% of the league.
Furthermore, courtesy of Mike Kelly and SportLogIQ, approximately half of the league’s goals are scored from the net-front, inner-slot area. Hyman was tied with @Brady Tkachuk for the most Inner Slot Shots in the league this season, with 100 in 76 games.
Hyman’s goal/chance generation near net-front areas is evidently one of his most valuable traits, as three of his six goals in the second round have come from the front of the net. This is a direct cause of his excellent ability to drive scoring chances. He constantly positions himself near opportunistic areas to score, and is consistently involved in net-front battles with opposing defenders.
“Over my career, where I’ve scored goals is all around the net,” said Hyman, earlier in the season. “It’s an area I’m very comfortable around.”
“We’ve always had good net-front guys, but he’s at a little bit of a different level,” said McDavid.
Hyman’s forechecking capabilities are above-average as well, ranking in the 70th percentile in Forecheck Pressures, 76th percentile in Dump-In Recoveries, and in the 65th percentile in Offensive Zone Takeaways. Although puck battle data is unfortunately unavailable to the public, to my eye, I think Hyman is also quite reliable at winning puck battles all over the ice. He’s extremely effective down low and in the corners.
All of this ties into his exceptional work ethic. He’s an energetic player with a tenacious, hard-working play style that consistently crashes the net for high-danger opportunities. His effort is always present, and it’s a rare occurrence to see Hyman take shifts off.
He’s a type of player that both statistically-inclined fans and more old-school fans have loved, with his efforts showing up in his underlying numbers and box-score totals.
“He competes every night,” said former Leafs teammate Morgan Rielly, last season. “That’s what his career’s been based around. He’s a guy that teammates can rally around because of his work ethic, and how he plays.”
Here’s a look at some other microstats for Hyman. 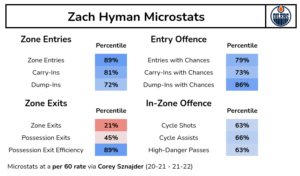 Hyman is effective at generating cycle offence. In the past two seasons, Hyman ranks in the 63rd percentile in shots off the cycle, and 66th percentile in shot assists off the cycle. Occasionally, he can be a dangerous play-maker as well; he ranks in the 63rd percentile in High-Danger Passes (a HD pass is defined as either a cross-slot shot assist or a shot assist from behind the net).
He isn’t the most active transitional player in his own end, and he typically leaves the deeper transitional breakouts to the defencemen or his center (McDavid or Draisaitl). However, when he does exit the zone, it’s typically with clean possession, and with the absence of a turnover/icing.
It’s a similar trend to Hyman’s defensive zone retrieval results. He ranked merely in the 34th percentile in DZ Retrievals, but his DZ Retrieval Success Rate ranks in the 81st percentile. From this, we can deduce that Hyman isn’t defensively involved to a large extent at 5v5, but when the puck is on his stick in the defensive zone, he’s efficient and responsible at moving it out.
Meanwhile, Hyman is quite useful in regards to Zone Entries. What causes Hyman to be so versatile in this facet is that Hyman carries and dumps the puck into the zone at decently high rates. He can also generate a high quantity of chances from his carries and dump-ins.
Hyman is also an active contributor on special teams as well, ranking 4th among forwards in Power Play TOI, and 1st among forwards in Short-Handed TOI. He’s much more involved in the DZ while penalty-killing, as he placed 3rd among Edmonton forwards in SH Goals Against/60 (for reasons I may explain in the future, I dislike xGA for special teams).
His wide skillset and excellent versatility make him a superb complementary player. He can generate chances in a large variety of ways; off the rush, off the cycle, off dump-ins and forechecking, and especially near the front of the net. He was an exceptional fit alongside Toronto’s stars in Matthews and Marner, and he continues to perform well alongside McDavid and Draisaitl in Edmonton.
“What I’ve learned from playing with really good players is that you don’t change the way you play too much, and you learn and adapt to their tendencies,“ said Hyman. “Elite players want the puck. If you can get them the puck, they’re going to be pretty happy.”
In these playoffs, Hyman currently holds a 62% goal differential. His line with Draisaitl struggled at 5v5 in their series against Los Angeles, largely as a result of Draisaitl’s injury, but in Edmonton’s series against Calgary, Hyman was excellent on the 2nd line.
With Hyman on ice, the Oilers outscored the opposition 8-1 at 5v5 and 4-1 without McDavid or Draisaitl. He also holds a 56 xGF% in his last four games (after a brutal night all-around for the team in Game 1).
Even if you include Game 1 and the Los Angeles series, he’s at a solid 52 xGF%. Once again, his average shot quality +/- ranks second on the team in these playoffs (behind McDavid, although that isn’t difficult to guess).
He’s a quite loveable person off-ice as well. For those unaware, Hyman is a children’s book author, with three books published thus far. He also had a beautiful and adorable interview alongside Ben Stetler, several weeks back. It’s definitely easy to root for him (and Ben as well, of course).
“First and foremost, he’s such a good guy,” said McDavid. “He’s just got such a great personality, and he’s so positive. He brings lots of energy to the rink, every single day.”
With all of this considered, although the term on his current deal is certainly hefty, he’s currently worth every penny of his $5.5M cap-hit. Behind McDavid and Draisaitl, he’s been a large reason for Edmonton’s success in the regular season and the playoffs, and hopefully, it continues.
“It’s fun to watch,” said McDavid on Hyman’s tenacity, after Game 5 on Thursday night. “He’s really fun to watch out there, just the way he hunts pucks, the way he holds onto pucks, and how much effort he brings each and every night. It really energizes our team.”

“If you can bring half the effort that [Zach] Hyman does, you’re going to have a pretty good night.”
*All microstats courtesy of Corey Sznajder / AllThreeZones, all other stats courtesy of EvolvingHockey and the NHL unless stated otherwise
Find me on Twitter (@NHL_Sid)
Nation Takes
Oilers Talk
Recent articles from NHL_Sid