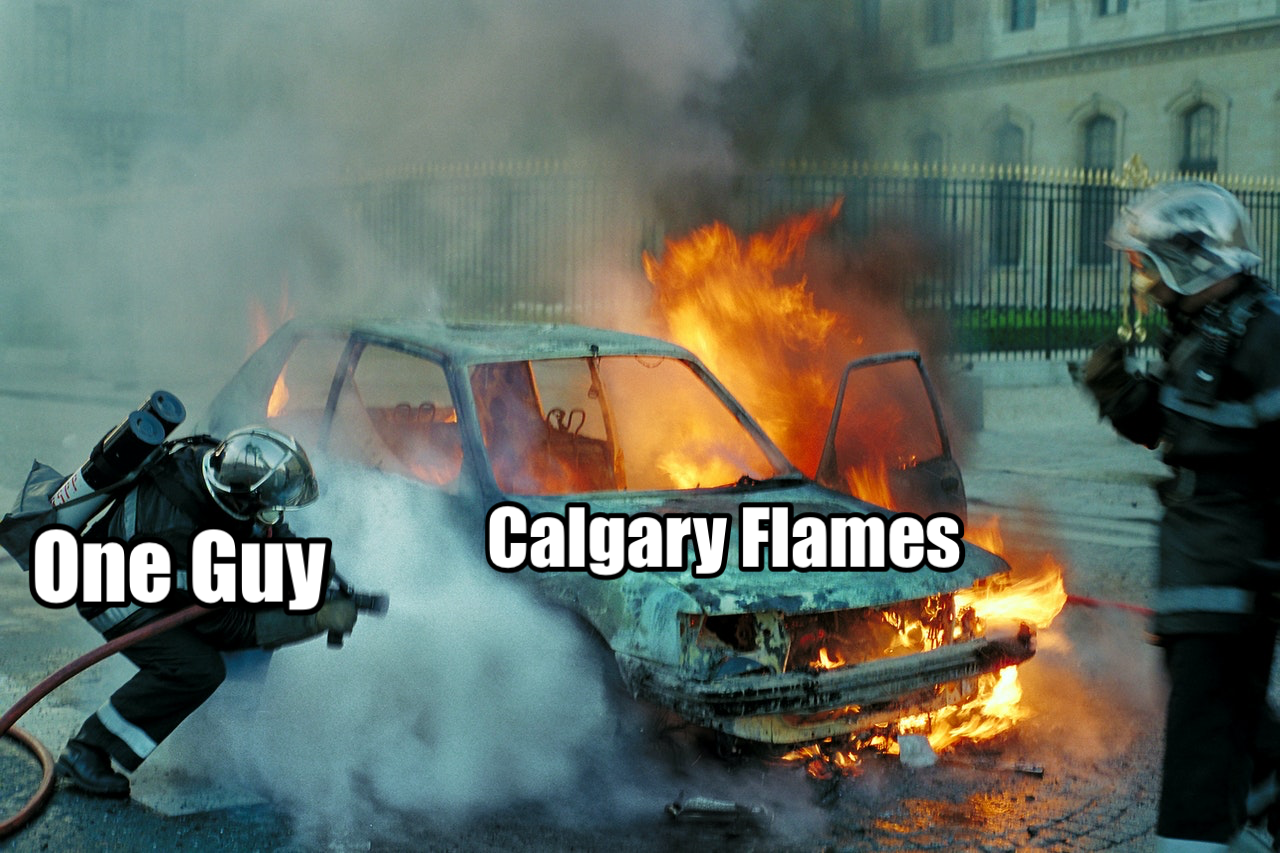 By baggedmilk
8 months ago
Comments
Eight wins down, eight more to go. Final Score: 5-4 Oilers in OT
Advertisement
Ad
Advertisement
Ad
Can I be honest for a minute? Today was the most stressed out I’ve been about a playoff game so far, and it’s a weird thing to admit considering the Oilers came into this thing ahead 3-1 in the series. Seeing as we knew the Flames were going to throw everything they had at the boys to try and keep their playoff dreams alive, I guess the concern was that we’d have guys looking past the fourth win and onto the Western Conference FInals. Knowing that there was a desperate team coming for them and that there’d be a storm to weather, I was looking for the Oilers to get a good start to try and negate some of the pressure that was bound to come their way. But in the start, it seemed like both teams needed a few minutes to feel each other out as neither side was really able to generate anything substantial. Unfortunately, that slow start also allowed the Flames a lane to get on the board first as they capitalized on one of the rare high-danger chances they had. If anything, I thought the Oilers were lucky to be down by a single goal because they were really struggling to put a couple of passes together. It wasn’t a horrible period or anything, but it was certainly sloppier than we would have liked.
Advertisement
Ad
Advertisement
Ad
Heading into the second period, I felt like the Oilers would be fine if they were able to tighten up their choices with the puck. If they could just pass the puck to each other rather than no one in particular then that small change would already be a sizeable improvement on what was happening early. Yet, despite their best attempts and a few quality looks on net, the Oilers couldn’t get anything past Markstrom in the first few minutes while the Flames were able to execute on another one of their chances at the other end. And for the third time in as many games in Calgary, the Oilers found themselves down by a pair of goals. But as we’ve seen just as many times in this series, being down by two goals wasn’t nearly enough for our boys to fold their hand. Then, in what can only be described as the wildest run of goals I’ve ever seen, the Oilers and Flames traded six goals back-and-forth in a span of eight and a half minutes. That insane sequence included a new NHL record for the fastest four goals scored in a span of only 1:11 in what can only be described as pure chaos.
Advertisement
Ad
Advertisement
Ad
With the game tied and 20 minutes to play, the Oilers had a real chance to punch their ticket through to the third round but it was going to take a much tighter effort defensively than we got in the second. They had to be much quicker on pucks instead of giving the Flames so much time and space to make moves. Over the first few shifts, the Oilers had all kinds of jump and turned that hustle into a few quality chances on Markstrom but couldn’t manage to get anything through him. At the other end, the Flames kept throwing everything they could on Smith from all angles in the hopes of catching him sleeping. As the pendulum swung back and forth, it became very clear that this was a ‘next goal wins’ type of period and so when Coleman scored I felt my heart sink into the pit of my stomach. But then the impossible happened. The goal was reversed for kicking even though this call will be debated for a long time, and instead of heading back to Edmonton for Game 6, the Oilers got a new life in the overtime period.
Advertisement
Ad
Advertisement
Ad
Heading into OT, the Oilers needed to have a big push right from the jump because these bonus frames have not gone well for them over the last couple of years. They needed to find a way. Seeing as we got to this point on such a controversial decision by the NHL, the Oilers had to take advantage of the opportunity. And after a few tense moments in our own end, Leon Draisaitl found his ride or die in the high slot and hit him with a perfect pass, giving McDavid just enough time and space to snap a low shot by past Markstrom on the glove side. Don’t you feel like having McDavid set up by Draisaitl was the way this was meant to go? That’s the way I look at it. And just like that, the series was over and we’re moving on.
The wrap.

Keys to the game:

Those were the fastest four goals scored in #StanleyCup playoff history – by a full 22 seconds.

This is being overthought. The Flames are cheaters. A cheater would kick the puck in. The simplest solution is usually correct.