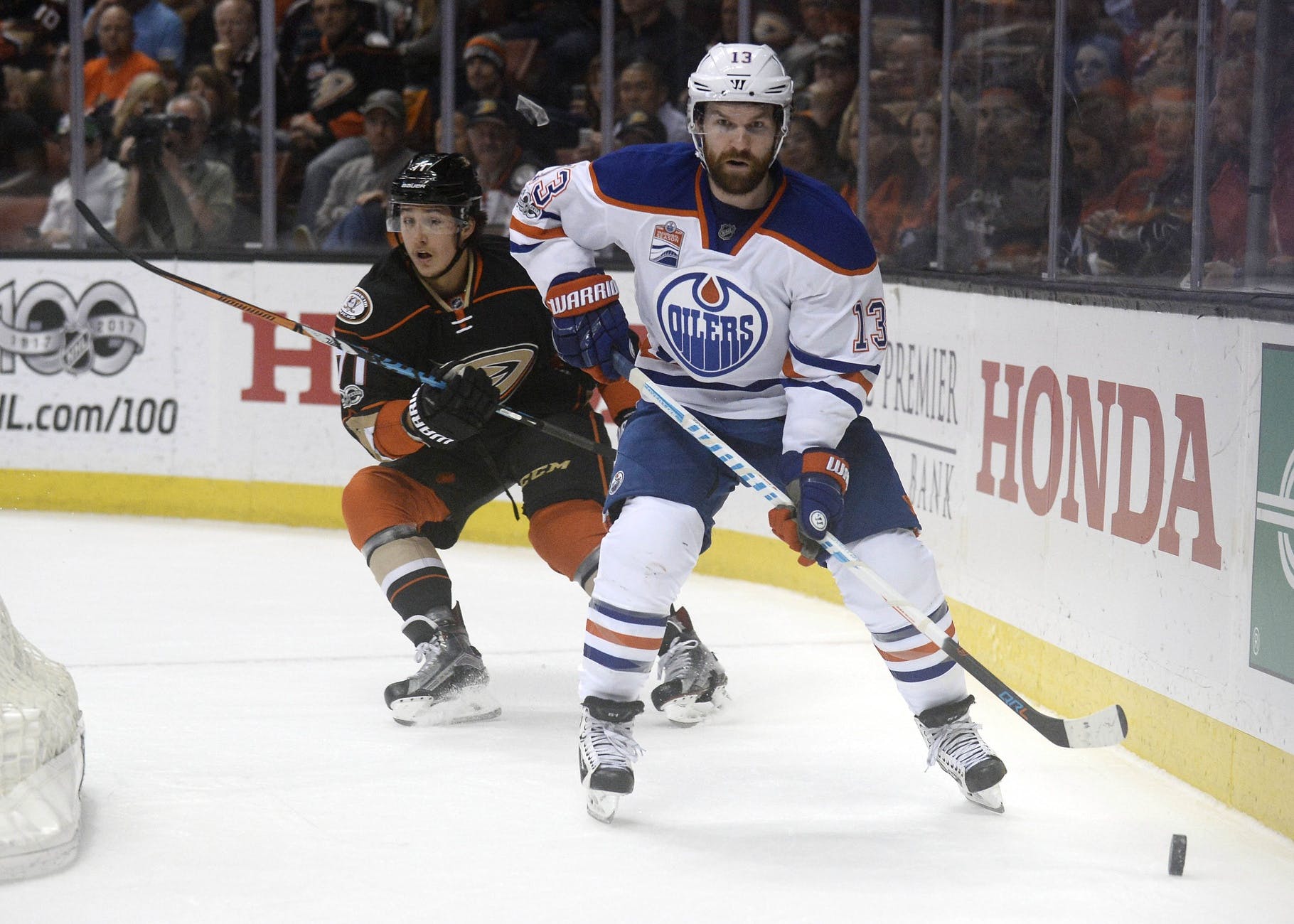 By Zach Laing
1 month ago
Six former Edmonton Oilers will be representing the Red and White at the Spengler Cup.
Riley Nash, Alan Quine, Brendan Perlini, David Desharnais, Tyler Ennis and Colton Sceviour were all named to the Canadian roster that was released Thursday.
Nash was drafted by the Oilers in the first round of the 2007 draft, but never played with the team. The Oilers traded him to the Carolina Hurricanes ahead of the 2010 draft for a second-round pick Edmonton used to select Martin Marincin. Nash is with the AHL’s Charlotte Checkers this year and has scored nine goals and 23 points in 26 games.
Quine, meanwhile, signed a one-year with the Oilers as a free agent in Oct. 2020 and appeared in seven games with the AHL’s Bakersfield Condors scoring three assists. He’s spending this season with the AHL’s Ontario Reign scoring four goals and 12 points in 22 games.
Perlini joined the Oilers organization last season appearing in 23 games in the NHL scoring four goals and five points and another 18 games with the Condors. There, he scored 11 goals and 18 points. He was all about the vibes during the Oilers, and had this incredible quote last January. This season he’s playing for the AHL’s Chicago Wolves and has seven goals and 11 points in 17 games.
Deharnais’ time in Edmonton was short, but he made quite the impact. The Oilers acquired him at the 2017 trade deadline in exchange for Brandon Davidson appearing in 18 regular season games scoring four points. Come the Oilers’ playoff run, he scored the overtime game-winning goal in game five against the San Jose Sharks. He’s spent the last four seasons with HC Fribourg-Gotteron in the Swiss League and has six goals and 18 points in 28 games this year.
Ennis was another deadline add for the Oilers joining the team in 2020. Edmonton shipped back a 5th round pick to the Ottawa Senators and he drew in for nine games scoring four points. He re-signed with the Oilers appearing in 30 games scoring nine points in 2020-21, but the club opted not to re-sign him again. This year, Ennis signed with SC Bern in the Swiss League where he’s scored five goals and 16 points in 17 games.
Lastly, Sceviour spent last season with the Oilers drawing in for 35 games scoring five points. He split his time between the Oilers and AHL Condors where he scored six goals and 11 points in 22 games. This year, he signed with SC Bern in the Swiss League and has scored 11 goals and 22 points in 31 games.

Review of Bruins find ‘no misconduct’ in Mitchell Miller signing

An independent review of the Boston Bruins has found “no misconduct” by team executives in the botched signing of prospect Mitchell Miller, the Bruins reported Thursday.
The review, conducted by former U.S. Attorney General Loretta Lynch, acknowledged “gaps in the club’s procedures” and provided a series of recommendations to be implemented to ensure something like it doesn’t happen again.
The recommendations include:
• Establish clear written policies for vetting off-ice conduct, including identifying red flags requiring detailed vetting and documented resolution
• Establish clear timetables and responsibilities within the organization to investigate prospects’ community or other off-ice commitments
• Establish centralized documentation of vetting to include reporting on red flags and off-ice issues and ensure such documentation is available to all stakeholders involved in the process
• Establish tracking system to ensure responsibilities for all vetting tasks are clearly assigned and tracked.
• Utilize independent third-party resources to investigate and resolve factual issues when reviewing red flags
• Determine whether there are specific training or rehabilitation programs the prospect should participate in depending on the nature of the red flags.
Here’s some of what Daily Faceoff’s Frank Seravalli wrote about the news:

The Bruins have called it an “independent review,” which was led by Lynch and the law firm Paul, Weiss, Rifkind, Wharton & Garrison – although the review was initiated and paid for by the Bruins’ organization, which doesn’t make it truly “independent.”
The team’s press release said “Bruins leadership and employees cooperated fully” and included interviews and the reviews of “thousands of documents and communications relating to the signing of Miller.” The exact findings and substance of those interviews and documents were not publicly released, as other teams have done upon the completion of internal reviews, such as the Chicago Blackhawks with the Kyle Beach sexual assault.
The Bruins signed Miller, 21, to a three-year, entry-level contract on Nov. 4. He was previously renounced as an Arizona Coyotes draft pick after it came to light that Miller was convicted in juvenile court for physical, mental and racial abuse of a developmentally-disabled Black classmate as a 14-year-old.
Within hours of Miller’s signing, the Bruins received significant pushback from their own players, fans, corporate partners and even the NHL’s commissioner’s office on the decision. Commissioner Gary Bettman said Miller was not eligible to play in the league. The story further unraveled when a statement from Miller’s agent, Eustace King of O2K Sports, was picked apart for inaccuracies and mistruths.
Two days after signing Miller, the Bruins released a statement on Nov. 6 saying they “decided to part ways” with Miller. To date, Miller remains under contract with the Bruins, and has earned more than $116,000.
The victim, Isaiah Meyer-Crothers, and his family spoke out in the days following Miller’s signing, saying: “It hurts my heart what he did to me … I can’t take more of this.” Bruins president Cam Neely publicly apologized to Meyer-Crothers and also spoke to Meyer-Crothers’ mother, who provided further insight into the situation.
Why the Bruins failed to contact the Meyer-Crothers family before the decision to sign him as part of the due diligence process is one reason why the review was commissioned. The Bruins vowed to examine their player-vetting process to ensure the process moving forward “reflects our core values.”

This is the third time this week the Canucks have made a transaction involving Delia under emergency conditions after the 28-year-old and his wife Ava welcomed their second child into the world on Monday morning.
Delia was first sent down on Monday, with Arturs Silovs coming up to serve as Spencer Martin’s backup in Vancouver. Delia was then called back up on Tuesday, with Silovs returning to Abbotsford in time to play in the baby Nucks’ first of back-to-back games against the San Jose Barracuda.
Abbotsford won that game by a final score of 6-2, with Silovs stopping 22 of the 24 shots he faced. The two goaltenders then swapped places once again, with Delia playing in Abbotsford last night, stopping 31 of 34 shots en route to a 6-3 victory over the Barracuda.
It may feel like deja vu, but the Canucks called up Delia again, once again under emergency conditions.
With Delia starting last night, Spencer Martin is the Canucks’ expected starter tonight against the visiting Seattle Kraken. Tomorrow in Edmonton, expect to see Delia get the last start before the Christmas break, unless Spencer Martin faces an unusually low number of shots tonight or does some other great thing that a goaltender can do that we refuse to say out loud.