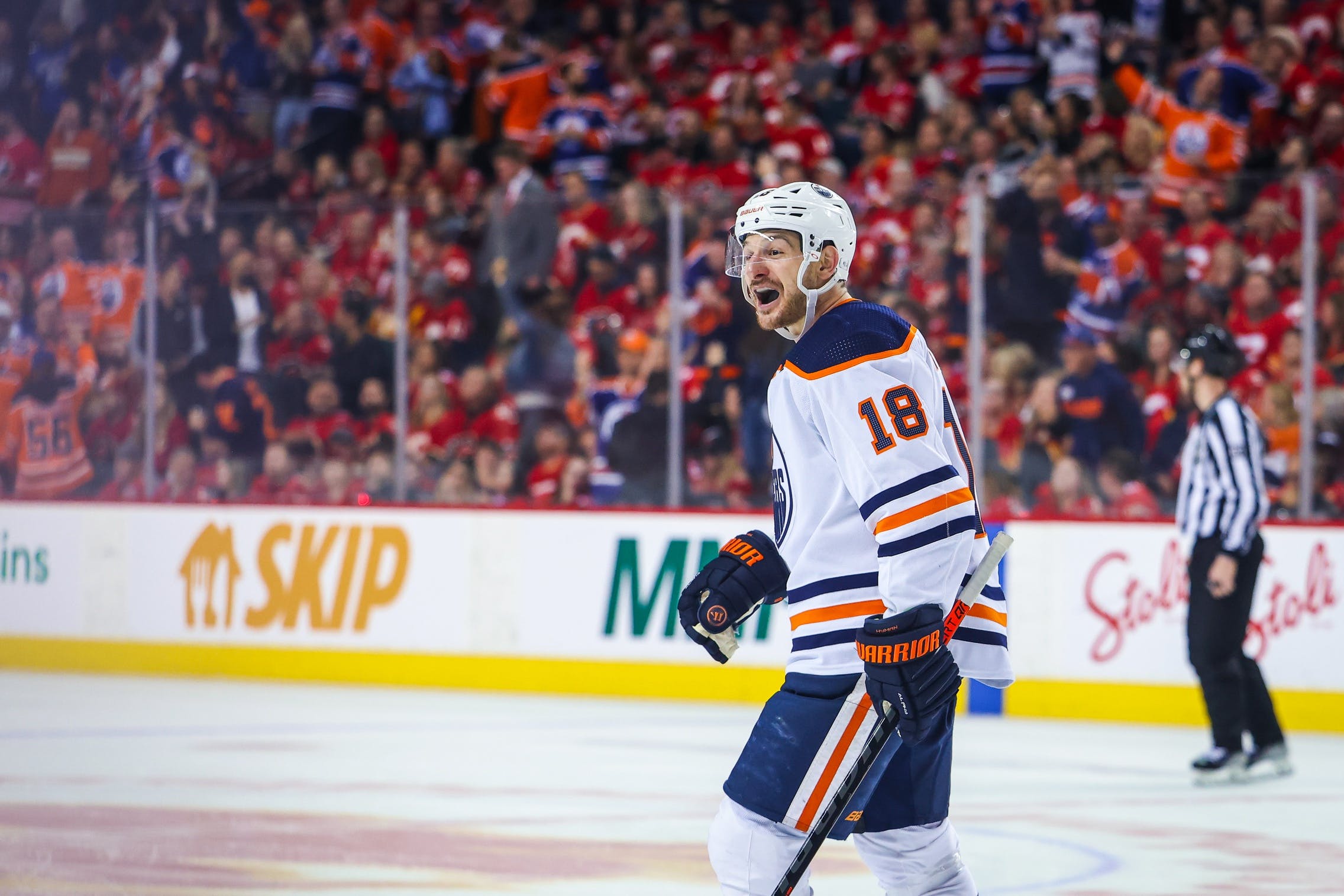 By Robin Brownlee
6 months ago
@Zach Hyman called it an emotional roller-coaster — one that could have come right off the rails when the Edmonton Oilers spotted the Calgary Flames a 2-0 lead early in Game 2 Friday. Instead, what started out looking like a replay of Wednesday’s series-opening 9-6 loss turned into a 5-3 win and a series tied 1-1 going into puck-drop tonight.
That should tell us something about the resilience of this group of players. On a night that began with panic and doubt among some Oilers fans in the first six minutes – let’s start with the *#^%$#% Mike Smith stuff – there was none of it with the players. Despite an unquestionably bad start, the big goaltender and those in front of him dug in and refused to fold, even though they had to score seven goals to have five of them count.
There was Connor McDavid, who deked Jacob Markstrom out of his strap and can to cut Calgary’s lead to 3-2 right after the Oilers had a goal by Leon Draisaitl waved off when he was called for goaltender interference. That’s 20 points for McDavid through nine playoff games. There was Hyman, out-legging a pair of Flames and scoring the 4-3 goal shorthanded. He had another called back. Is anybody not loving this guy? And what about Duncan Keith?
“I think Connor is the best hockey player in the world,” said coach Jay Woodcroft. “He’s willing to pay a price to win. He’s driven to win. He has an effect on everyone in our organization with that desire to take his game to the next level. The way this guy is playing right now, it’s special. He’s driving our team forward.”
And there was Smith, once again showing the “retire old man” critics where to shove it. Smith stopped 37 of 40 shots. While Markstrom can’t seem to get his act together against the Oilers, Smith, early goals-against and all, is stopping pucks at a .929 clip through nine games this post-season. He chipped in an assist on Draisaitl’s 5-3 goal for good measure.
“I thought Mike was excellent,” Woodcroft said. “You know, someone who, as I said, when we broke down made the big save when we needed it. You talk about someone with an unbelievable resume and great experiences to pass on to his teammates. He’s one of our leaders as well.”
So here we are. Game 3 in the BOA. Two bad starts and all, the series is up for grabs 1-1 and the Oilers have yet to show us their best from start to finish.
“We had some things not go our way, but I think it speaks to the resiliency and resolve in our group,” said Woodcroft. “It’s something we’ve been working on for the last three months. The ability to stick with it. If you walked into our room, you’d find a group of men that are wholly sure of our message, our game plan, and of what it takes to win come crunch time.” 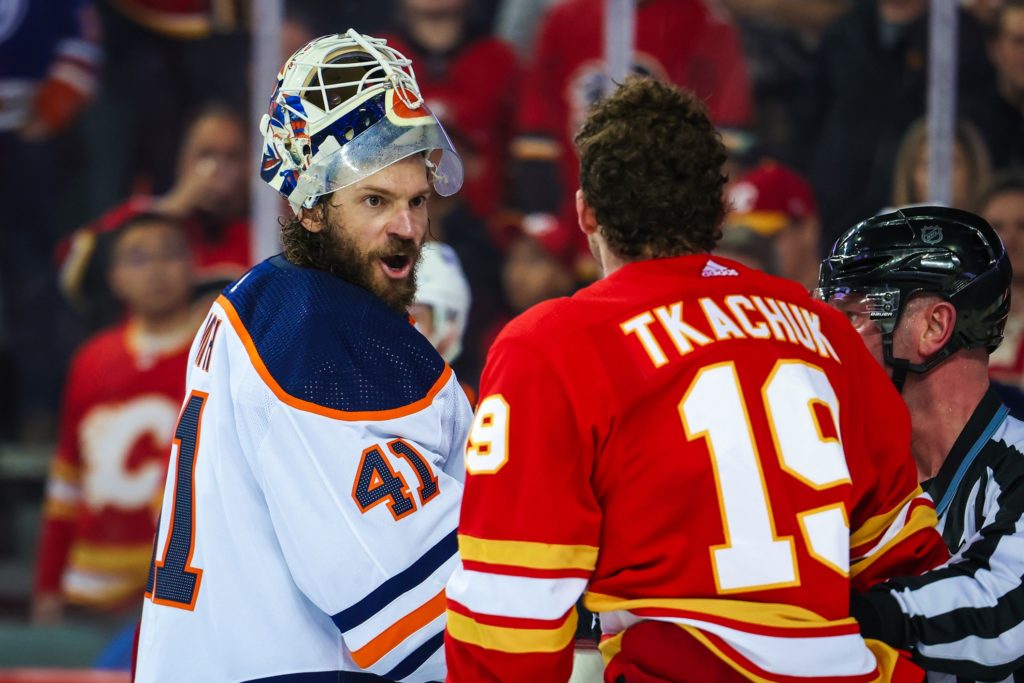 Mar 26, 2022; Calgary, Alberta, CAN; Edmonton Oilers goaltender Mike Smith (41) and Calgary Flames left wing Matthew Tkachuk (19) exchanges words during the third period at Scotiabank Saddledome. Mandatory Credit: Sergei Belski-USA TODAY Sports
His hat-trick in Game 1 aside, Matthew Tkachuk garnered a fair bit of attention for the pointed chirp he directed at Evander Kane, who declared bankruptcy in January 2021, as the two were getting after each other Wednesday. “You want some money?” That’s a pretty solid shot.
Tkachuk comes by his sharp tongue honestly. Dad Keith Tkachuk, in the crowd Wednesday and Friday, delivered a money shot of his own in a game between the Oilers and Winnipeg Jets in 1995-96. Tyler Wright, who is now Edmonton’s director of player personnel, chirped Tkachuk about being stripped of his captaincy while sitting out during the negotiation of a new contract.
“Hey, your C is laying on the ice,” said Wright, alluding to Kris King getting the C. Tkachuk responded with “Six million, six million,” referring to a big pay hike. Wright responded, “Yeah, well, the mask and the gun you used to get it are over there in the corner.” The old man, nicknamed Walt, earned $81 million in a career that saw him score 538 goals in 1,201 games.
Like his dad, Matthew, 24, is in the chips. He’s earned more than $24 million and will be looking for a new contract coming off a 104-point season. Tkachuk is one of those players you hate as an opponent, but every team would love to have him. 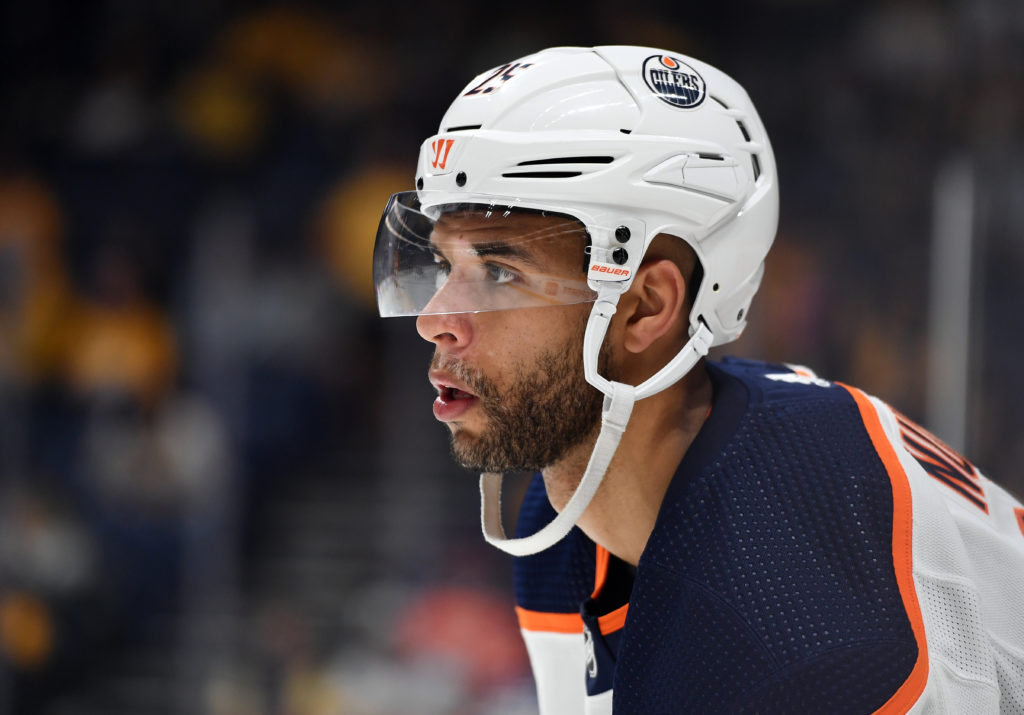 Apr 14, 2022; Nashville, Tennessee, USA; Edmonton Oilers defenseman Darnell Nurse (25) waits for a face off during the third period against the Nashville Predators at Bridgestone Arena. Mandatory Credit: Christopher Hanewinckel-USA TODAY Sports
Darnell Nurse, who is playing through an injury but still logged 23:21 Friday, is joining Ryan Getzlaf and P.K. Subban as finalists for the King Clancy Trophy, awarded to the player who “best exemplifies leadership qualities on and off the ice and has made a noteworthy humanitarian contribution to his community.”
Former Oilers Kevin Lowe, Ethan Moreau and Andrew Ference are past King Clancy winners.

A historic first for the WHL Thursday as 15-year-old Chloe Primerano, a defender from the Burnaby Winter Club Under-15 team, became the first woman skater drafted into the CHL after being taken 268th overall by the Vancouver Giants.
If Primerano makes the Giants, she’ll be the first player since goaltender Shannon Szabados of Edmonton to play in the WHL — with Tri-City in 2002 — and first skater to play in any CHL league.