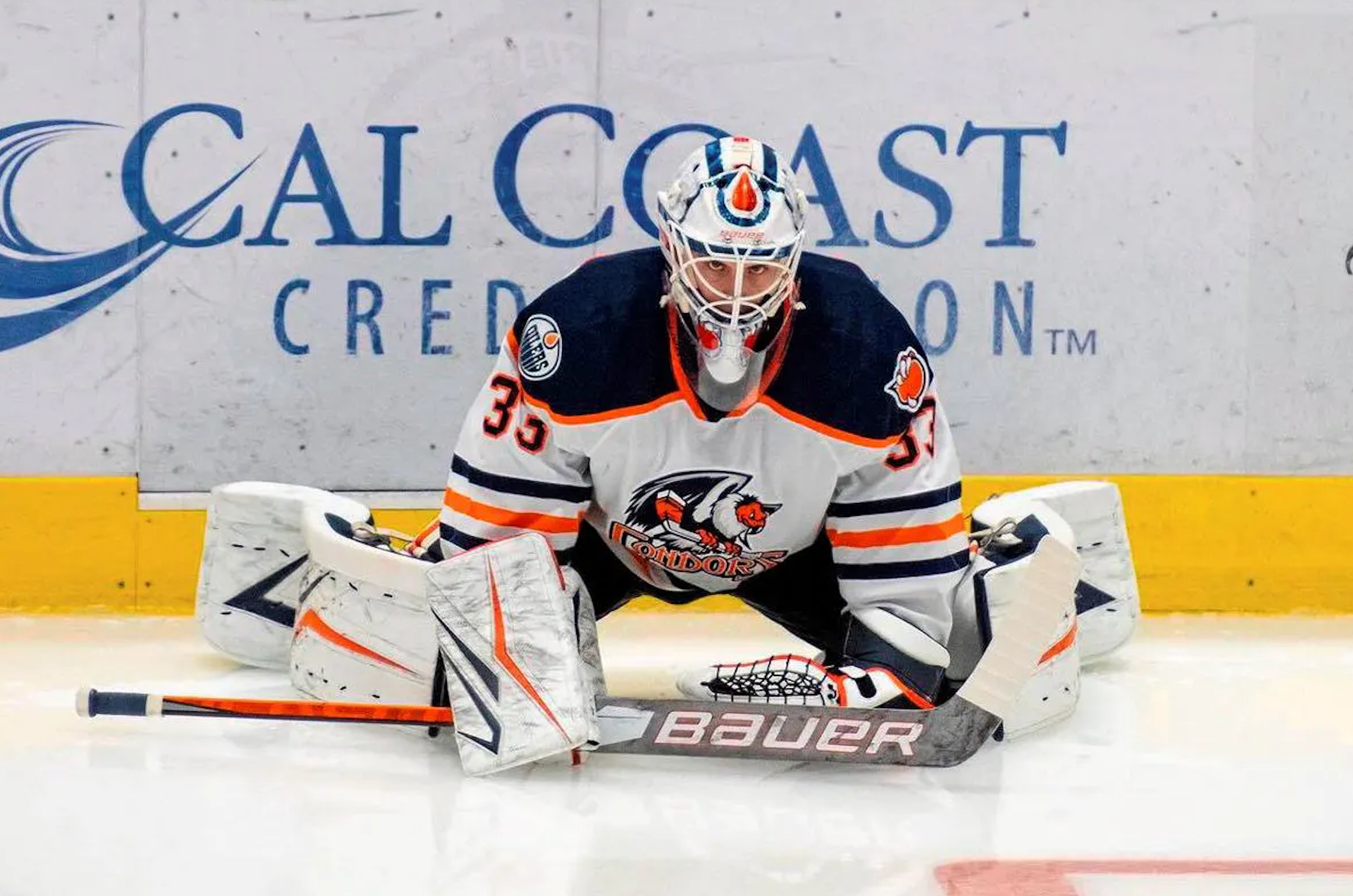 By Cam Lewis
1 month ago
With the World Juniors kicking off on Monday, it’s a perfect time to take a look at how the various prospects in the Edmonton Oilers’ system have performed over the first half of the 2022-23 season.
Let’s take a look back at our Prospect Countdown list from back in August and whether each player’s stock has gone up or down since then…

Much like Stuart Skinner did before him, Olivier Rodrigue seems to have found his groove in the third season of his entry-level contract. After a couple of difficult seasons transitioning to the professional level, Rodrigue has been excellent for the Bakersfield Condors in 2022-23, as he owns a .916 save percentage over the course of 15 games. He’s become the team’s top option in net, earning the starting role from veteran third-string goaltender Cal Pickard.
Rodrigue’s stock is up. He’s showing why the Oilers traded up to select him at the 2018 NHL Draft.

A freak injury suffered during Edmonton’s Development Camp last fall derailed a good chunk of Jake Chiasson’s draft-plus-one season in 2021-22. He played well when he returned from injury, as he scored 18 points in 20 games and then added three points in six playoff games. This season, Chiasson has nine goals and 24 points through 31 games for the Brandon Wheat Kings. It’s good to see him healthy and playing, but the production isn’t as high as you’d like for a player in their final WHL season.
Chiasson’s stock is neutral. He hasn’t yet been signed to an entry-level contract and needs to have a strong finish to the season.

Through his time with the United States Development Program and at Harvard, Phil Kemp was known as a defensive defenceman with little offence in his game. After putting up just 10 points over 67 games with the Condors over his first two professional seasons, Kemp has found some more offence in his game, as he has 11 points through 26 games in 2022-23.
Kemp’s stock is up. Defence is his calling card but the added offence will increase his likelihood of breaking through as an NHLer.

One of the biggest stories on the Condors in the first half of the 2022-23 season has been the emergence of Mike Kesselring as a top-pairing defender at the AHL level. Kesselring was a long-range project when he was selected out of the USHL back in 2018 and the upside is evident now in his third season with the Condors. Through 26 games, Kesselring has eight goals and 11 points and his ability to effectively move the puck up the ice has turned heads.
Kesselring’s stock is up. He has one more season after this one on his entry-level deal and he should get a look at the big-league level before it’s over.

James Hamblin went undrafted despite producing at a solid clip during his time with the Medicine Hat Tigers of the WHL. The Oilers inked him to a minor-league deal and his two-way play and neverending motor earned him an entry-level contract. He has nine points in 15 AHL games this season and has held his own in nine games with Edmonton since being called up to make his NHL debut.
Hamblin’s stock is neutral. He got the entry-level deal because he looked like he could be a quality depth player and he’s matched that expectation thus far.

After having to play in Slovakia because the OHL season was cancelled in 2020-21, Tyler Tullio finished off his major junior career with 42 goals and 86 points over 65 games for the Oshawa Generals in 2021-22. He has just seven points through 21 games as a rookie in the AHL, which seems somewhat disappointing at a glance, but the report out of Bakersfield is that Tullio’s play away from the puck has been impressive for his age.
Tullio’s stock is neutral. It’s difficult to draw a conclusion about the player’s season when he’s been buried in the lineup on a team that favours its veterans.

The Oilers dealt Dmitri Samorukov to the St. Louis Blues in exchange for Klim Kostin right before the start of the season. Kostin has been a nice addition, giving the team some skill and size in the bottom six while Evander Kane is out with a wrist injury. Samorukov hasn’t yet broken through with the Blues and has five points through 29 games for their AHL team.
Samorukov’s stock is down. It’s looking less and less likely he’ll make good on his potential and the Oilers appear to have done well in this swap.

Matvei Petrov had an incredible debut season in North America as his 40 goals and 90 points with the North Bay Battalion put him alongside the top 18-year-old players in the league in 2021-22. The hope was that he could push for the OHL’s scoring title in his second season in the league but perhaps those expectations were too lofty. This season, Petrov’s production has taken a little bit of a dip, as he has 11 goals and 39 points through 31 games.
Petrov’s stock is down. This isn’t really a knock as Petrov is still performing incredibly well for a sixth-round pick, but the dip in production has slowed the hype train.

After playing a major role in the University of Denver’s championship-winning season, there was a lot of excitement about Carter Savoie moving up to the professional game. So far in his first season with the Condors, he has just three goals and two assists over 20 games. The reason Savoie fell in the 2020 draft was concern that his play away from the puck and his physical tools would hold him back at the pro level.
Savoie’s stock is down. As with Tullio, we can cut him slack because of how the Condors are playing their forwards, but Savoie doesn’t have the same two-way game to fall back on.

Edmonton’s second-round pick from the 2019 NHL Draft has all of the tools to be a great player, as he boasts size, strong skating, vision, and a wicked shot, but a lack of drive has made his career with the Condors wildly inconsistent. He scored 13 goals and 26 points in 56 games last season and only has three goals and five points through 15 games this year.
Lavoie’s stock is down. He’s now in the third season of his entry-level contract and he hasn’t established himself as a consistent contributor on the Condors. 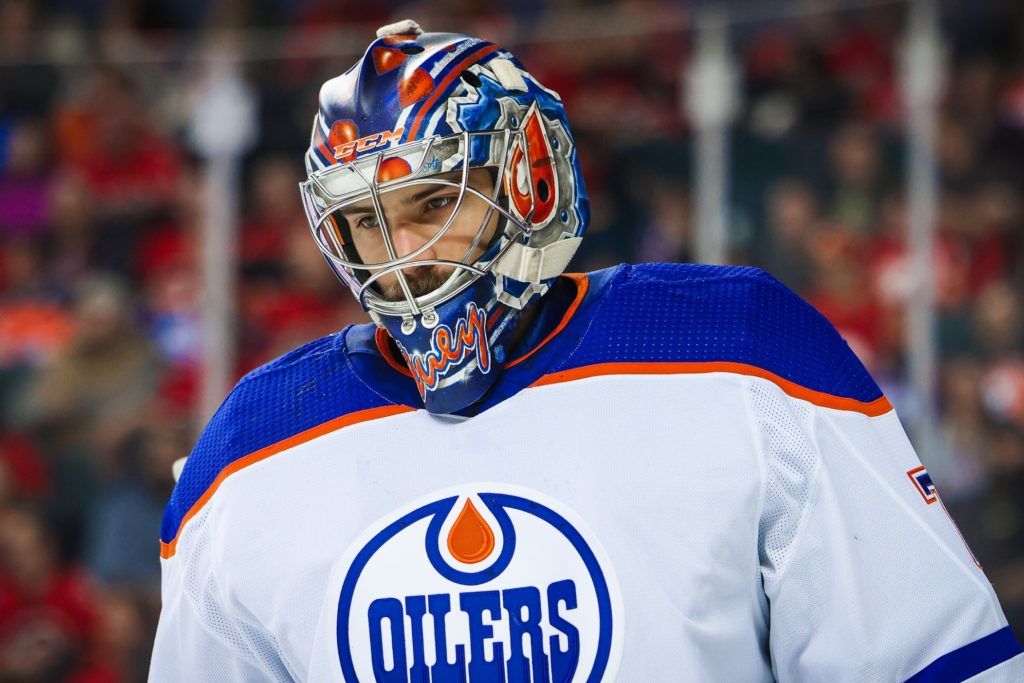 Stuart Skinner has proved this season that his cup of coffee last year wasn’t a mirage. After posting a .913 save percentage over 13 games with the Oilers in 2021-22 while Mike Smith was injured, many were suggesting Edmonton’s best goalie was in Bakersfield. This season, Skinner has taken over the starter’s net from Jack Campbell and earned himself a three-year contract extension.
Skinner’s stock is up. This is the last time we’ll see him on a prospect list as he’s graduated into a key part of the team’s picture.

Reid Schaefer had an incredible breakout season for the Seattle Thunderbirds of the WHL last year. He went from scoring two points in 18 games in 2020-21 to exploding for 32 goals and 58 points in 66 games in 2021-22 and wound up getting selected by the Oilers with the No. 32 overall pick in the 2022 NHL Draft. So far this season, Schaefer has 15 points and 27 points in 22 games for Seattle and he cracked Team Canada’s World Junior squad.
Schaefer’s stock is up. He’s been a dominant forward in the WHL this season and appears ready to make the jump to the professional game.

Xavier Bourgault had an excellent draft-plus-one season in the QMJHL last year, as he scored 75 points over 43 regular-season games before adding 22 points over 16 playoff games. His transition to the professional game has been smooth, as he sits second on the Condors in scoring with 15 points in 26 games while playing in all situations.
Bourgault’s stock is up. Things haven’t been easy for the crop of rookie forwards in Bakersfield this season and Bourgault’s performance thus far has been a win.

After a strong couple of seasons with the University of Wisconsin, Dylan Holloway’s professional career got off to an unfortunate start, as a nagging wrist injury resulted in him not making his debut with Bakersfield until January of 2022. He cracked Edmonton’s roster out of training camp and has one goal and four points through 31 games playing bottom-six minutes.
Holloway’s stock is neutral. His production as a rookie in the NHL might be disappointing but Holloway only had a half-season in the AHL to his name and is still learning the professional game.

Philip Broberg’s debut in North America went well last season. He scored 23 points in 31 games for the Condors and didn’t look out of place during his cup of coffee with the Oilers. His development had been on par with that of Oscar Klefbom’s a few years ago so the expectation was that Broberg could step into a permanent role on Edmonton’s blueline in 2022-23. So far, he’s played just 11 games with the team thanks to an injury suffered during training camp.
Broberg’s stock is down. The hope was that he would have broken through as a regular NHL defender by now but injuries have slowed down his arrival.
For reference, players who I considered to be “prospects” when doing this countdown were those who had played fewer than 50 NHL games and were 23 years old or younger at the start of the 2022-23 season.
Editorials
Featured
Recent articles from Cam Lewis