By Cam Lewis
4 months ago
The Edmonton Oilers have put a heavy emphasis on adding forwards to their prospect pool over the past few drafts.
Dylan Holloway, Xavier Bourgault, and Reid Schaefer, the team’s last three first-round selections, are all forwards. All told, in 2020, 2021, and 2022, the Oilers made 16 selections and 12 of them were used on forwards.
Flying completely under the radar among this influx of forwards to the system is James Hamblin, a local undrafted free agent who earned an entry-level contract with the Oilers following a strong showing with the Bakersfield Condors on an AHL deal.
Hamblin has produced at every level he’s played at but, listed at 5’9″ and 176 pounds, has been overlooked due to his size. Given the NHL is continuing to trend toward speed and skill as opposed to size and strength, the Oilers might have found themselves a diamond in the rough here. 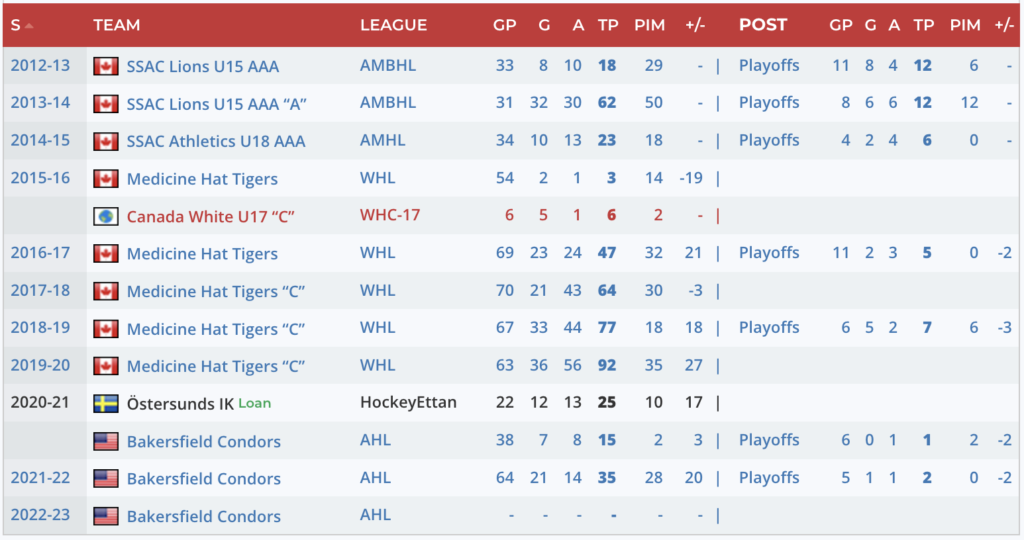 Hamblin was born and raised in Edmonton and came up playing for South Side Athletic Club. In 2012-13, he played Bantam AAA with Tyler Benson and Stuart Skinner on a team that wound up winning the provincial championship. At the 2014 WHL Bantam Draft, Hamblin was selected by the Medicine Hat Tigers with the No. 17 overall pick.
After scoring just three points in 54 games in his rookie season in the WHL in 2015-16, Hamblin took a major step forward in 2016-17 with 23 goals and 47 points in 69 games for the Tigers. While that was a significant improvement, it wasn’t enough for Hamblin to get selected in the NHL Draft.
The Tigers named Hamblin captain at the beginning of the 2017-18 season and he scored 64, 77, and 92 points for them over his next three seasons. Beyond the offensive production, Hamblin was praised by his coaches in Medicine Hat for his 200-foot game, as he was relied on to shut down the other team’s top players…

“Jimmy was a complete player. He doesn’t do one thing particularly well, he does everything excellent,” said Tigers assistant coach Ryan Smith. “We relied on him to generate offence, shut down other teams’ top lines and play both sides of the special teams. Jimmy was usually the first player to the rink and the one of the last to leave. He wanted to get better every day.”

The Oilers signed Hamblin to a two-year AHL contract following his final season in the WHL in 2019-20. While hockey in North America was paused due to the pandemic, Hamblin played in Sweden’s third league and scored 25 points in 22 games. He joined the Condors when the AHL resumed play and scored 15 points in 38 games in his first cup of coffee with the North American professional game.
Hamblin’s production improved in his second season in the AHL in 2021-22, as he scored 21 goals and 35 points in 64 games and had a plus-20 rating. The impressive thing about Hamblin’s 21 goals for the Condors last season is that 18 of them came at even-strength and he was a forward who was often leaned on to play in defensive situations.
The Oilers liked Hamblin’s AHL showing enough that they inked him to a two-year entry-level contract back in March.
Now, we’ve seen many instances in the past in which the Oilers have a player who produces at a high level in the AHL but can’t hack it in the NHL, ranging from Ralph Intranuovo to Alexandre Giroux to Cooper Marody. Generally, when you see a successful AHL player who can’t make the NHL, it’s because they don’t quite have the skill to play in an NHL team’s top-six and they don’t have the speed to be effective in a bottom-six role.
The thing that Hamblin has going for him that makes him an interesting prospect for the Oilers is that he boasts excellent wheels and a strong 200-foot game. So while it might be far-fetched to assume that Hamblin can crack Edmonton’s roster and play in the top-six, he can be a useful jack-of-all-trades type player who impacts the game at both ends of the ice with his speed.
The hope here is that the Oilers have a diamond in the rough who was overlooked due to his size, such as Yanni Gourde, who the Tampa Bay Lightning inked to an AHL deal back in 2014. Gourde produced at an elite level in the QMJHL and he had some strong performances offensively in the AHL, but the thing that ultimately got him called up to the big leagues and what made him stick as a key contributor with the Lightning was his defensive game. Gourde could play in Tampa’s bottom-six, providing the team depth scoring while also playing a sound game in his own zone.
Can Hamblin become Edmonton’s Yanni Gourde? That’s a lofty expectation, as Gourde has scored 235 points over 384 NHL games, but the fact an undrafted player who joined the organization on an AHL deal is now in the discussion to contribute at the NHL level is a win. NHL teams need quality depth in the minors and perhaps Hamblin can earn himself a cup of coffee this year.
For reference, players who I consider to be “prospects” for this countdown are those who have played fewer than 50 NHL games and are 23 years old or younger at the start of the 2022-23 season.