Random Thoughts: Around the NHL Edition 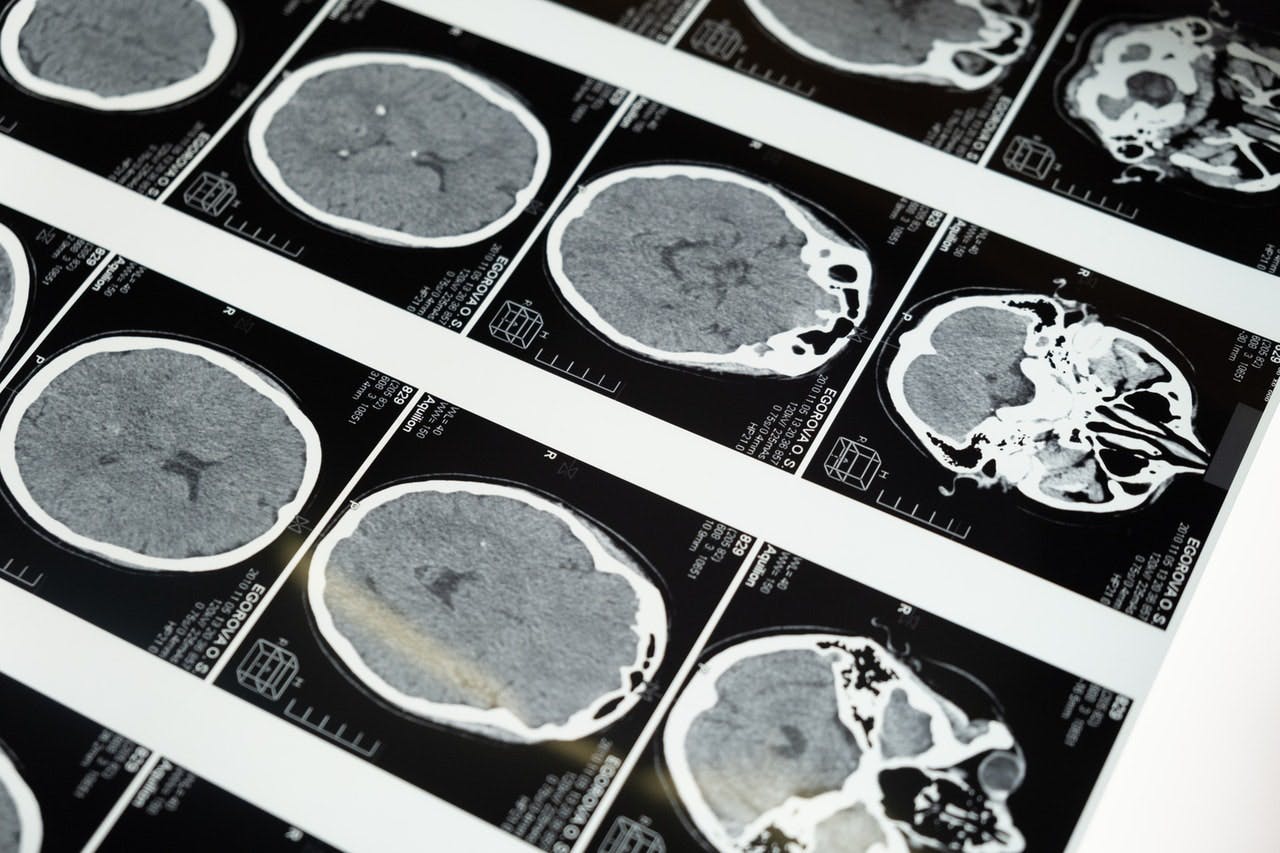 By baggedmilk
1 year ago
It’s Saturday afternoon in Edmonton and that means your ol’ pal Baggedmilk is back with another round of Random Thoughts. As I do every weekend, I’ve dumped my brain’s contents out into this here blog post and I invite you all to join me for a leisurely tour through my brain bank.

Where are you Yamo?

Every year there seems to be at least one Oiler that we’re waiting on for a new contract, and here in 2021, it’s Kailer Yamamoto that’s taking a little bit longer than we maybe expected. That’s not to say that I think Yamamoto will hold out or miss any time or anything like that, but I am a little bit surprised it’s taking into the back half of August to get his signature on a new contract. With only eight goals and 21 points over 52 games in 2021, it’s not like Yamamoto (an RFA without arbitration rights) has much leverage in negotiations unless Ken Holland is really trying to grind him down after what we’d all agree was a tough year. Looking through what you guys had to say in this week’s WWYDW, there was a range of ideas about how much and how long the team should go with the former 22nd overall pick and I wonder how close we’ll all be when the ink is dry. A couple of weeks back on Oilersnation Radio, I took a guess at $1.85 million/year for two years, thinking that maybe a two-year bridge deal would give us Yamo enough time and motivation to prove he’s worth a long-term contract while also affording the organization two more seasons to figure out what we have here. No matter what the final number ends up being, I look forward to seeing how this shakes out as Yamamoto is basically the last bit of unfinished business we’ve got left on the books ahead of training camp.

At this point in the summer, I can’t believe we’re still talking about Jack Eichel and the Buffalo Sabres. I honestly would have thought that the guy would have been moved weeks ago at the draft and the fact that this disaster is still going on is setting us all up for all kinds of interesting possibilities. While I 100% think he will get traded ahead of the upcoming season, my favourite potential option for Eichel would be to see him go back to Buffalo even though he absolutely does not want that. The shenanigans that followed a scenario like that would be hilarious and the ‘Team Chaos’ that lives inside of me would love to watch the awkwardness play out as everyone tried to be professional. Even though Eichel going back to Buffalo seems highly unlikely, stranger things have happened in this league and I don’t care if you think I’m selfish because I could use a little extra pre-season entertainment. Again, I don’t think that will happen and assume he’ll get traded before we get close to that possibility, but even thinking about it has been fun for me.

What is going on with the Coyotes? (Round 6?)

In case you’ve been enjoying your summer and ignoring the rest of the league, the City of Glendale announced this past week that the 2021-22 NHL season would be the Coyotes’ last at Gila River Arena, meaning the team will need to find a new home a year from now unless the relationship between the two sides can be salvaged. Now, there’s certainly a lot of time and a handful of options around Phoenix that could potentially house the franchise moving forward if they do in fact have to move, meaning a lot of the chatter about relocation could be all for not but just having the idea out in the universe that your team could move is an annoying black cloud to have hanging over your team.

“We are disappointed by today’s unilateral decision by the City of Glendale to break off negotiations on a multi-year lease extension agreement. We are hopeful that they will reconsider a move that would primarily damage the small businesses and hard-working citizens of Glendale. We remain open to restarting good-faith negotiations with the City. Most importantly, the Coyotes are one hundred percent committed to finding a long-term arena solution here in Arizona, and nothing will shake our determination to do what is right for our organization, residents of the entire Valley and, most important, our fans.” -Xavier A. Gutierrez, President and CEO, Arizona Coyotes

I’m not going to get too much about what the hell is going on with the Coyotes — Brownlee will have a breakdown tomorrow in Off the Top of My Head — but I just wanted to say that I’m actually feeling really bummed out for fans of the team that are watching this same movie again for the 1000th time. For as long as I can remember, Coyotes fans have had to put up with what seems like an annual kick to the shin with threats of relocation, and I truly hope that this last time we ever have to do this.* And before you hit me up in the comments section to say that the Coyotes have no fans and that’s why this is an issue, I’ve worked that joke over many times over the years but now I am honestly bummed out for the small but passionate group of supporters they do have. While no one will compare the Coyotes fanbase to what we’ve got up here, the reality is that there’s a group down there that has loved this team for decades now and I hope they get a resolution on this whole mess one way or another.
*Narrator: “It won’t be” 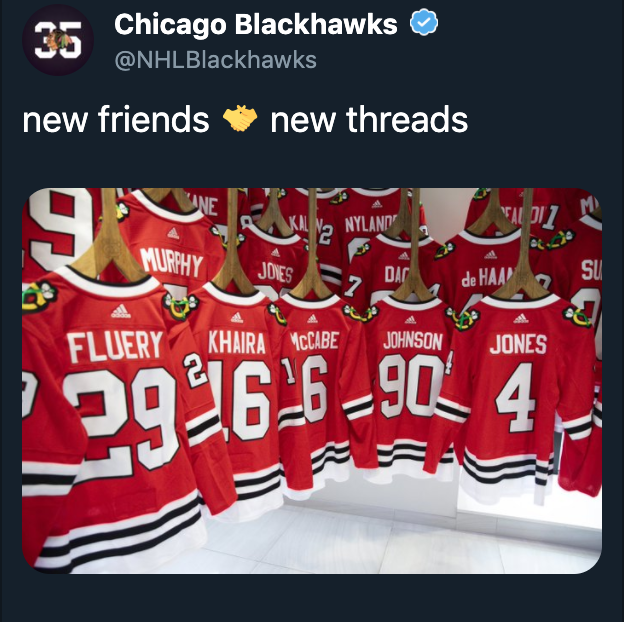 This picture that the Chicago Blackhawks posted on their Twitter account to welcome the new guys was one of the funnier things I’ve seen in a while because there are at least a small handful of people that got caught napping on the execution of this idea. I don’t know whose job it was to stitch the names on the jerseys but they really bunged up Marc-Andre Fleury’s name, which makes it even funnier that his #29 was front and centre in the photo. You’d think that someone would have a reference or something for the defending Vezina champ, but I guess that’s too much to ask for during these quiet days of summer. Even if you’re going to give the jersey guy a pass for the spelling mistake — Gord knows I’ve made more than my share of them — wasn’t there anyone else that was paying attention? Wasn’t there anyone that looked at the wall of sweaters before posting the picture and getting lit up on Twitter? Off-season effort right here, my friends.

On Friday, Henrik Lundqvist announced his retirement from hockey after 15 NHL seasons and 887 games played, capping off what was undoubtedly a career that will be remembered by many for years to come. For more than a decade, not only was Lundqvist one of the most handsome players in the league but he set the bar for what it meant to be a starting goaltender, and that made me think about how there is probably a big chunk of players in this league that are almost happy about the news because Lundqvist always seemed to have their number. Even without a Stanley Cup on his resume that includes a Vezina Trophy, Olympic medals, and World Championship titles, Lundqvist was about as good as it gets between the pipes and you have to think that makes him a Hockey Hall of Fame inductee sooner than later. Either way, seeing another guy retire that I spent the bulk of my life watching is yet another chapter in the “holy hell how did I get this old” saga.
Nation Takes
Oilers Talk
Recent articles from baggedmilk