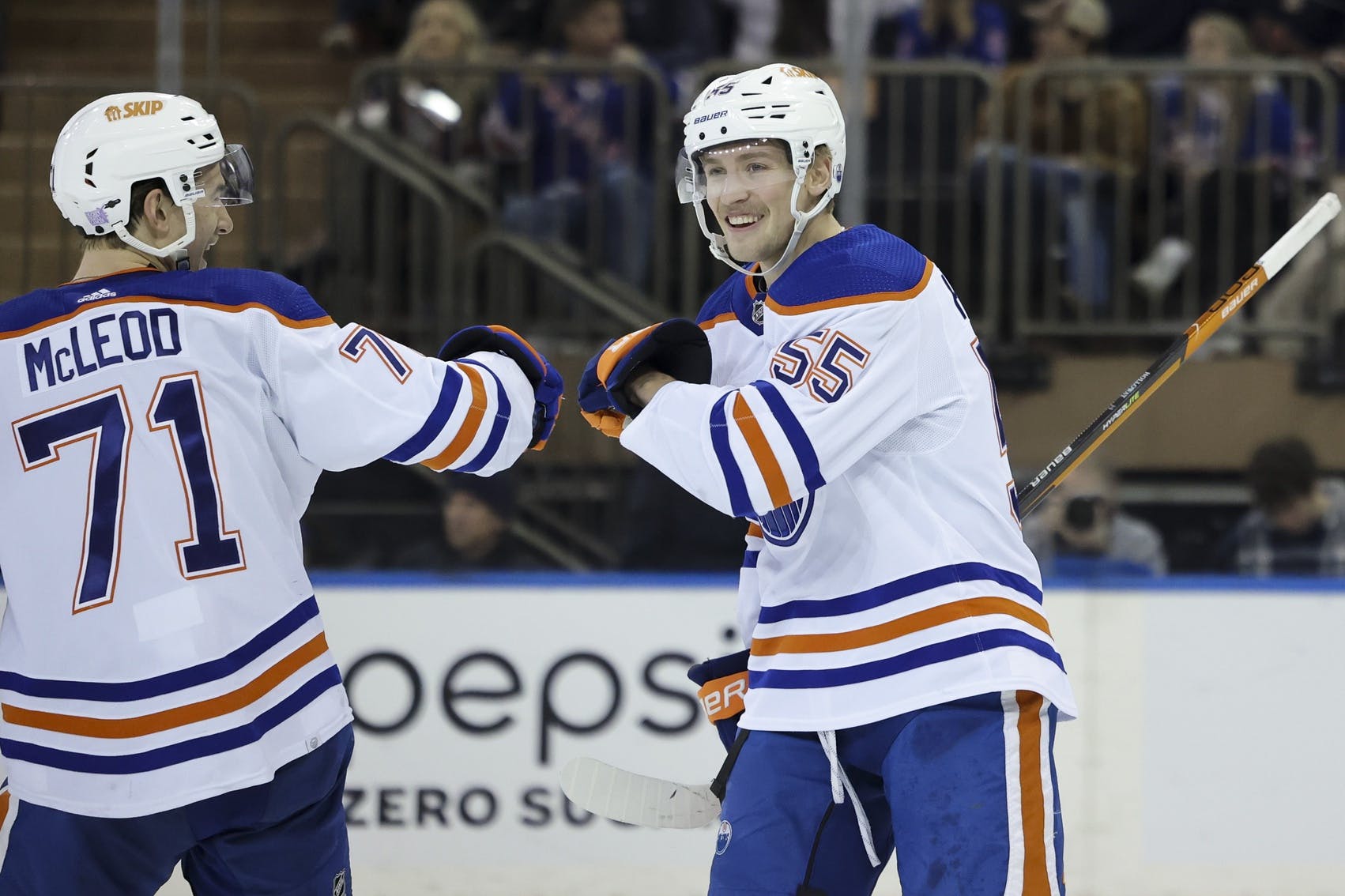 By baggedmilk
2 months ago
We’ve passed the American Thanksgiving checkpoint in this new NHL season, and I felt like it would be a good time for your ol’ pal Baggedmilk to come back with another dose of Random Thoughts to offer up some takes about what’s been happening lately and how big yesterday’s win over the Rangers was for a few different reasons.

When the Oilers went into the third period against the New York Rangers down by a field goal, I will readily admit that I wasn’t exactly feeling very confident about their ability to come back. As much as I believe in Connor and Leon’s ability to fill the net, the reality is that they need help doing it and the rest of the roster hasn’t been anywhere near good enough in that respect so far this season. Then, like a Phoenix rising from the ashes, the Oilers got two quick goals from Evan Bouchard and a third from Dylan Holloway in a span of just over five minutes to erase the Rangers’ three-goal lead and put themselves in a spot to steal two points. Three goals from guys outside of the top line? Magic. If there was ever a display of what depth scoring can do for your team, we got it yesterday in New York and now the tricky part will be figuring out how to make this happen consistently. If the Oilers can actually start getting a few goals from players other than McDavid, Draisaitl, RNH, and Hyman, then this tough patch we’re working through will seem like a distant memory and something we can laugh about later. Dare to dream?

HOLLOWAY’S FIRST WAS A BEAUTY

If there’s one thing that I absolutely love in this sport it’s the elation that comes when a player scores their first NHL goal. So when Dylan Holloway picked up his first against the Rangers on Saturday, not only did I enjoy the joy on his face when the puck went it but I was also losing my mind because of how big the moment was. Not only did Holloway pick up his first on a beautiful little dangle-snipe combo to beat one of the league’s best goaltenders, but he also tied the game in what was a must-win afternoon for his team. Despite a bunch of us — myself included — thinking he would be better served to play big minutes in Bakersfield, having him pick up his first NHL could be the boost he needed to get himself going and I’m looking forward to seeing how he responds. Even though we know that this one goal won’t turn him into a 30-goal sniper overnight — I think he will get there down the line — I do expect him to hit the ice with a little extra bounce in his step on Monday, and it won’t be surprising to me if he picks up a second much quicker than the 17 games it took him to grab number one.

EVAN BOUCHARD NEEDED TO THOSE GOALS, DIDN’T HE?

I don’t know if Evan Bouchard spent the second intermission of yesterday’s game reading everybody’s angry tweets or not — of course, he didn’t do that but just follow my joke down the rabbit hole here — but he went out and chose violence in the third period, registering his first two goals of the year in quick succession. For a guy that’s expected to produce offensively, I can’t imagine the relief he felt when that first one went over Shesterkin’s glove and into the back of the net. I mean, how else would you describe it? The poor guy has been denting shinpads for the last couple of weeks and he looked like he was white-knuckling his stick for weeks now, so to have him follow up his first goal with another one only minutes later was a huge boost not only for the team but for Bouchard personally. Confidence may not be something that you can track on a spreadsheet, but I wouldn’t be surprised at all to see Dad playing a whole lot better going forward now that he has something to feel good about in his game.

Outside of Evander Kane, there is no one else on this Oilers’ roster that can make me laugh with the kind of trolling we see on display here from Leon Draisaitl. Not only did he pick up the game-winner in the dying minutes of that hockey game, but he followed it up by knocking Jacob Trouba’s stick out of his hand on his way to the fist-bump celebration line. I don’t know if there was something leading up to that moment that caused Leon to troll Trouba like this, but I don’t even care, because there is nothing more entertaining that a guy that can write cheques and back them up with goals on the ice. Either way, I’m not sure how many of you missed this moment when you were watching live — I did — but I had a hearty chuckle this morning when I saw the replay and knew I wanted to share.

On the latest episode of Better Lait Than Never, I looked at the Oilers’ lack of depth scoring, the Universe’s alleged hatred of Jack Campbell, and why I should be allowed to hit some of you with my car. Subscribe to Better Lait Than Never for FREE on Spotify, Apple Podcasts, Google Podcasts, and wherever else you get your podcasts from!
Editorials
Featured
Recent articles from baggedmilk