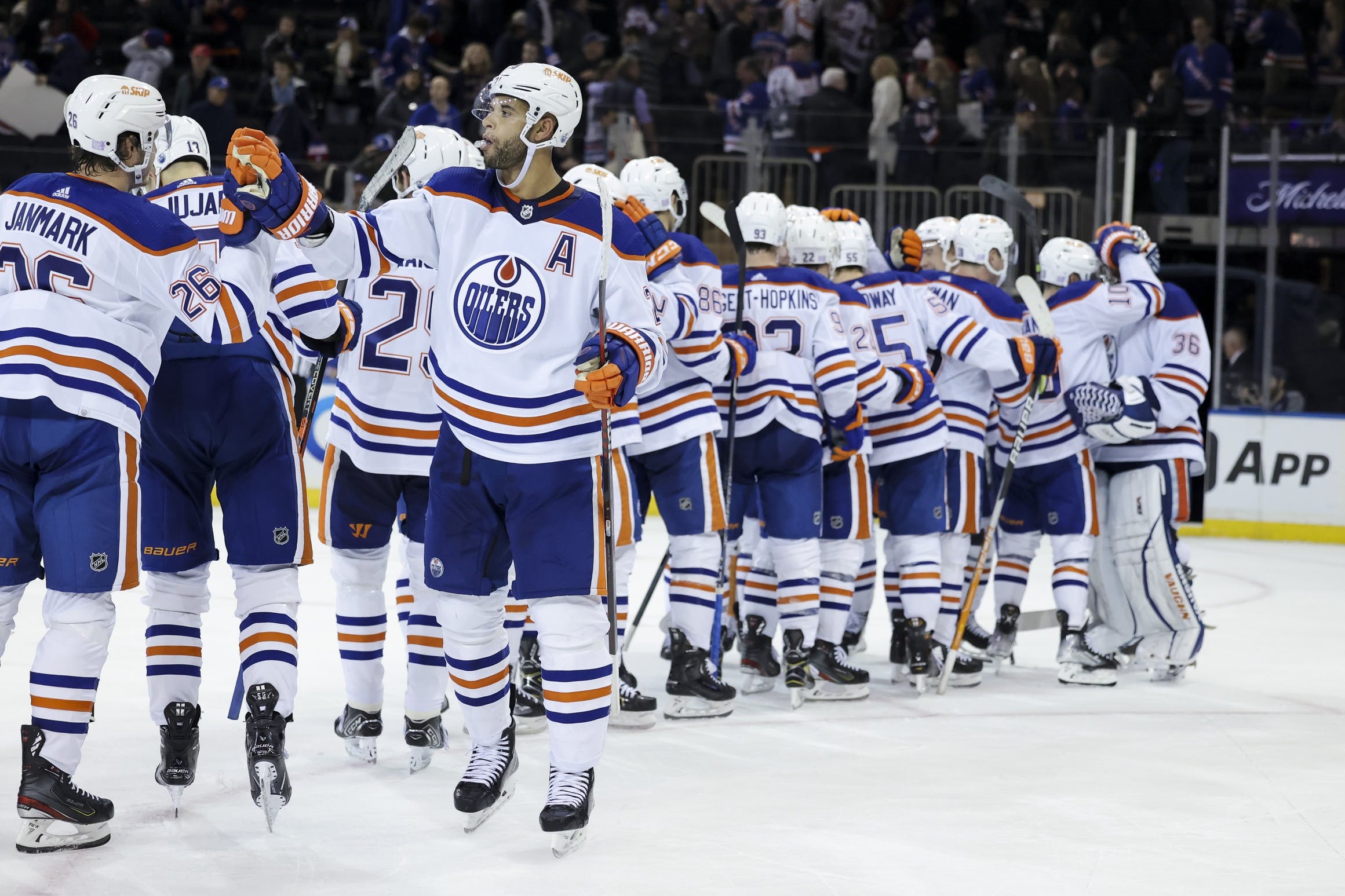 Photo credit: © Jessica Alcheh-USA TODAY Sports
By Cam Lewis
1 month ago
Comments
The Edmonton Oilers rallied from 3-0 down in the third period to beat the Rangers by a score of 4-3 on Saturday afternoon in New York. Here are the highlights from what was an incredibly exciting hockey game…

The Rangers opened the scoring just over two minutes into the game, continuing a problem that’s been ongoing for the Oilers for years now.
Adam Fox, New York’s Norris Trophy-winning defenceman, slid into Edmonton’s zone from the point and feathered a pass through the crease to Alexis Lafreniere, who tipped the puck past Jack Campbell. It was a ‘Welcome Back To The NHL’ moment for Philip Broberg in his first game with the Oilers this season, as Lafreniere was able to gain position right in front of Edmonton’s net.

After having a couple of goals called back, the Rangers finally pushed their lead to 2-0 with under five minutes left to go in the second period.
Cody Ceci made an errant pass in Edmonton’s zone and the Rangers were able to gain possession. Ryan Lindgren took a shot from the point that deflected wide of the net and Chris Kreider wound up bouncing it off of Campbell’s pads and in from behind the net when he was trying to make a pass into the slot. It was a tough shift for Ceci and one that Campbell would surely like to have back.
Advertisement
Ad
Advertisement
Ad

chris kreider makes it 2-0, for real this time. pic.twitter.com/XjCmhr0ClK

Roughly 30 seconds later, the Rangers made the score 3-0 with another chaotic goal. Tyson Barrie wasn’t able to keep the puck in New York’s zone and two Rangers forwards broke down on a two-on-one on Brett Kulak the other way. Campbell made the original save but Julien Gauthier managed to find the puck in the ensuing scrum in front of the net and wired a shot through Campbell.

Edmonton’s turnaround started just a few minutes into the third frame while defenceman K’Andre Miller was in the penalty box. The top power-play unit couldn’t get the job done so the second unit got a chance with the man advantage.
Ryan McLeod fed Jesse Puljujarvi in the middle of the zone and the big Finn tossed the puck back to the point for Evan Bouchard, who sniped a shot past a screened Igor Shesterkin. The goal was Bouchard’s first of the season.
Advertisement
Ad
Advertisement
Ad

it turns out the oilers can score goals. evan bouchard, assisted by jesse puljujarvi and ryan mcleod, finds the back of the net. oilers trail by two. pic.twitter.com/w9eHDOsj84

Three minutes later, it was Bouchard yet again bringing the Oilers to within one goal. Warren Foegele won a battle behind New York’s net and fired the puck out front. Ryan McLeod wasn’t able to corral the pass but Bouchard stepped into it and wired a slapshot through Shesterkin for his second of the game. It’s always incredible to watch a PDO-regression happen in real-time.

what a goal from evan bouchard. his second cuts the rangers lead to 1. pic.twitter.com/cApuTPnwVF

A few minutes later, Dylan Holloway tied the game at 3-3 with the first goal of his NHL career. McLeod fed Holloway with a no-look pass and he burst into New York’s zone and wired a wrist shot past Shesterkin.
A player’s first NHL goal is always memorable, but getting your first by flat-out beating a goalie as good as Shesterkin is something else.
Advertisement
Ad
Advertisement
Ad