Reid Schaefer and the Seattle Thunderbirds 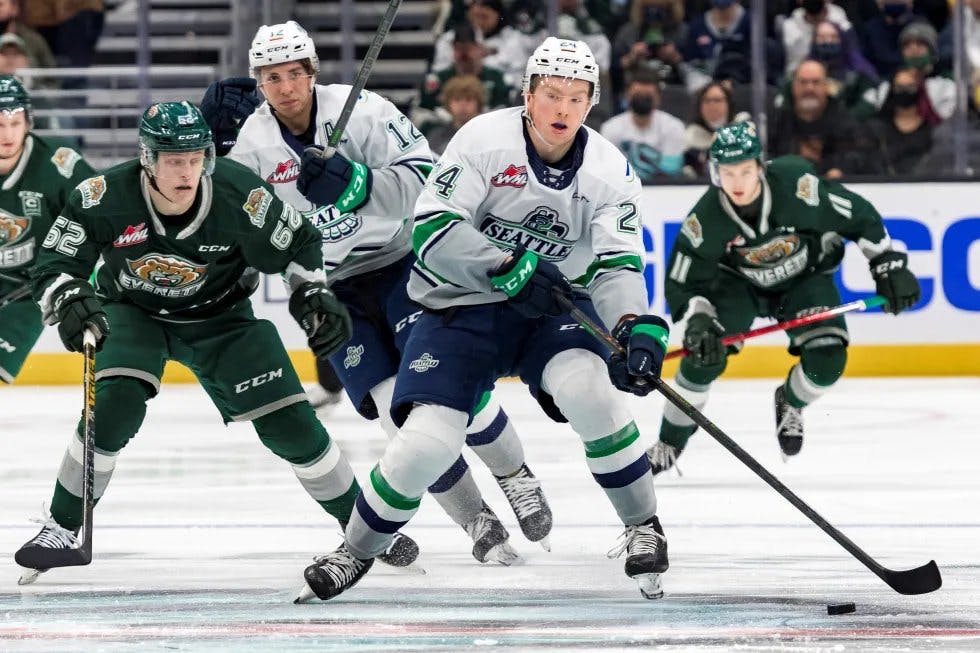 By Liam Horrobin
8 days ago
It is fair to say that we all wanted to see a little more of Reid Schaefer at the World Juniors. When Colton Dave got injured, the opportunity seemed like it had opened up for the Oilers’ first rounder in 2022, but unfortunately, that was not the case. Instead, Canada’s coaching staff opted to recall Owen Beck, who was initially cut in camp before returning as the 12th forward, which left Schaefer to play less than 5 minutes a night. Nevertheless, our boy came home with a gold medal and that is still a significant achievement.
Our boy “Ginger Beef” has now returned to his team the Seattle Thunderbirds of the WHL and looking to continue his marvelous start to the season. Since winning gold with Canada, however, Schaefer has not found a consistent rhythm yet. He did score two goals in a big game versus the Winnipeg Ice on the road, including a shorthanded marker in the first period to tie the game at one, but even he’d say there’s still room to grow.
Seattle began a road trip through Saskatchewan and Manitoba, which included six games in nine nights. Late in the second period of their game versus Prince Albert, Schaefer collided with his teammate, Jared Davidson, putting him out for the rest of the game after playing only 16:34. Fortunately, he did return the following night versus the Saskatoon Blades playing 27 shifts in 27:58.
Schaefer has had a strong season with the Thunderbirds that sees him putting up points at the greatest rate of his junior career, which ultimately helped him secure a spot on the Canadian roster. He is on pace to set new career highs across the board despite playing fewer games overall, and that’s exactly what we hoped for in his draft +1 season. Schaefer will likely have a deep playoff run too after the Thunderbirds loaded up in a big way.
Seattle acquired Colton Dach was also part of the gold medal roster from the Kelowna Rockets. This is not the first time Schaefer and Dach have played toge, there either. Back in U15, the two of them won a championship with OHA Edmonton. The hope for Seattle will be that they can repeat that same success. Dach was not the only big addition, however, with Winnipeg Jets first-rounder Brad Lambert joining the roster from the Manitoba Moose (AHL).
Last season, Schaefer’s WHL championship aspirations were halted in Edmonton by the Oil Kings. This season, the roster feels destined to cause a ton of damage, again, in the postseason, but this time achieve the ultimate goal.