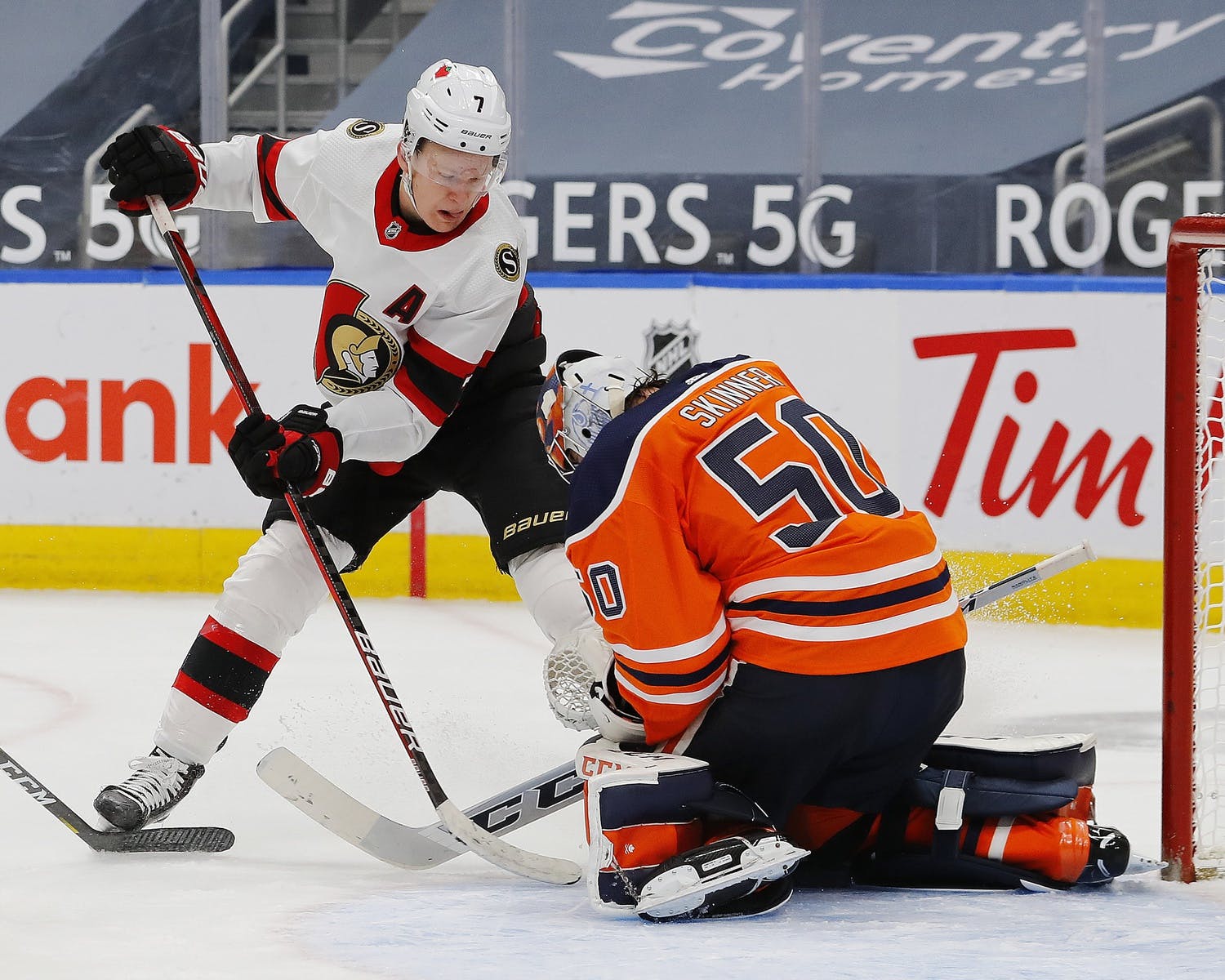 By Robin Brownlee
1 year ago
He has three years of professional hockey on his resume and a freshly inked two-year contract in his pocket. Is Edmonton Oilers’ goaltending prospect Stuart Skinner ready to make a serious bid for more playing time in the blue paint with the Oilers this season and script a hometown boy made good storyline?
While the considerable membership of the Anybody But @Mikko Koskinen Club is nodding in the affirmative about that possibility, I’m not sure. Will the former South Side Athletic Club stopper be good enough fast enough push Koskinen out of Edmonton before his contract expires? Does he have a chance to be the back-up to Mike Smith this season? It seems a stretch.
Skinner, 22, has just one NHL game under his belt – he made 33 saves in an 8-5 win over the Ottawa Senators Jan. 31. The bulk of his work last season came in Bakersfield. He was 20-9-1 with a .914 save percentage and 2.38 GAA. Skinner led the AHL in appearances with 31, wins, minutes played and saves.
All told, Skinner has played 78 games in the AHL with Bakersfield and 44 in the ECHL with Wichita since being drafted 78th overall by the Oilers from the Lethbridge Hurricanes in 2017. He was with the Oilers to start last season, backing up Koskinen with Smith out with an injury.
The new contract, a two-way ticket paying $750,000 on top, gives Skinner the opportunity to take the next step in his development in the city where he grew up cheering for the Oilers. 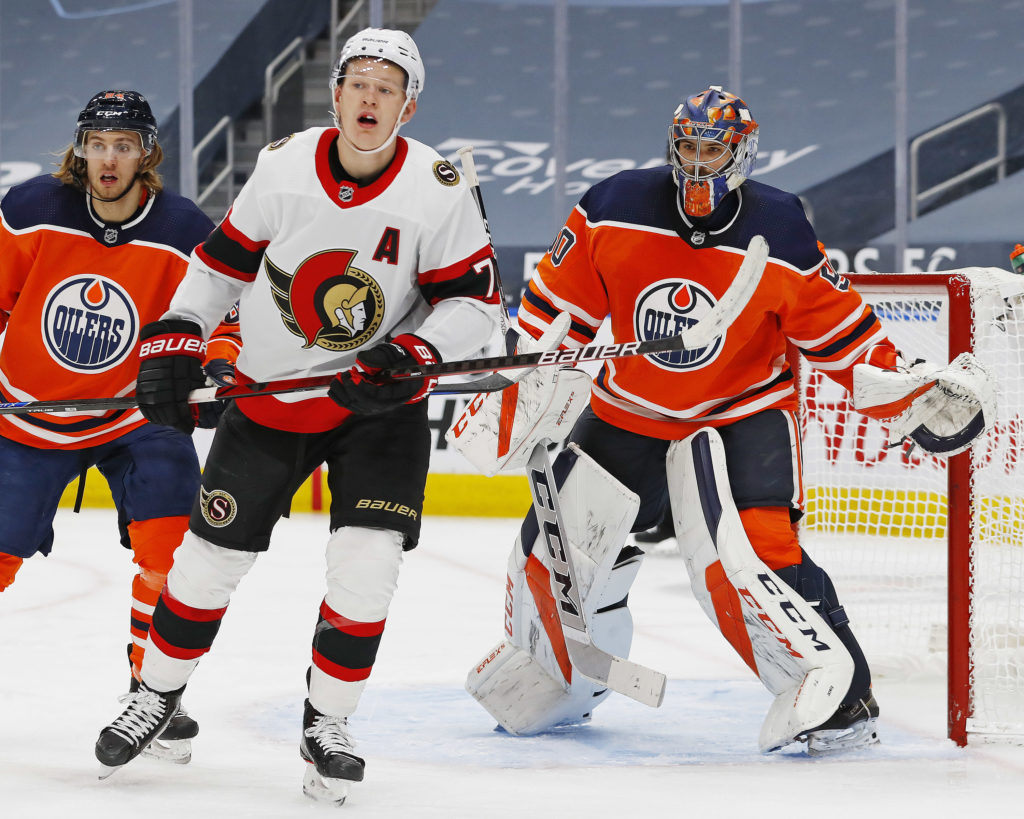 Jan 31, 2021; Edmonton, Alberta, CAN; Ottawa Senators forward Brady Tkachuk (7) tries to screen Edmonton Oilers goaltender Stuart Skinner (50) during the second period at Rogers Place.
“Obviously growing up in Edmonton and watching the Oilers play my whole life, it’s super exciting that I get a couple of extra years to prove myself and work my way up, and hopefully, I’m able to do something good with it,” Skinner said in an interview with Derek Van Diest of Postmedia. “Just being able to grow my game down in Bakersfield was super helpful for me last year, and I had a blast down in Bakersfield. We had a great group down there and a great coaching staff for our development. It was a lot of fun.”
Koskinen, who has one year left on a $13.5 million contract that’ll pay him $4.5 million this season, has been hit-and-miss during his tenure with the Oilers. The towering Finn has been very good at times. He’s been very bad in other stretches – including the May 6 debacle in which he allowed four goals on the first four shots in a 6-3 loss to Vancouver. All this we know.
Koskinen’s numbers are OK overall rather than brutal, but the frustration with him is the number of first-shot goals he’s allowed. That, and his contract is rightfully seen by fans as an unnecessary bit of ink done by former GM Peter Chiarelli on his way out the door. Without much of a market for Koskinen, GM Ken Holland will be hard-pressed to move him even if somebody like Skinner can push the issue this coming season.
At the very least, Skinner is at the front of the line in a young trio with Olivier Rodrigue and Ilya Konovalov looking to inherit the crease in Edmonton. Smith, 39, just inked a two-year contract. As of now, he’s the starter. Koskinen still has the inside track as the back-up. Like I said, he’s tough to move because of his contract, which has a NTC. All that said. There’s opportunity here.
“The goal this year is to make a really good impression in camp,” Skinner said. “Obviously, I would love to stay in the NHL for the year. That’s obviously the dream. Of course, that’s the plan going in and I think I’m working towards that goal right now.” 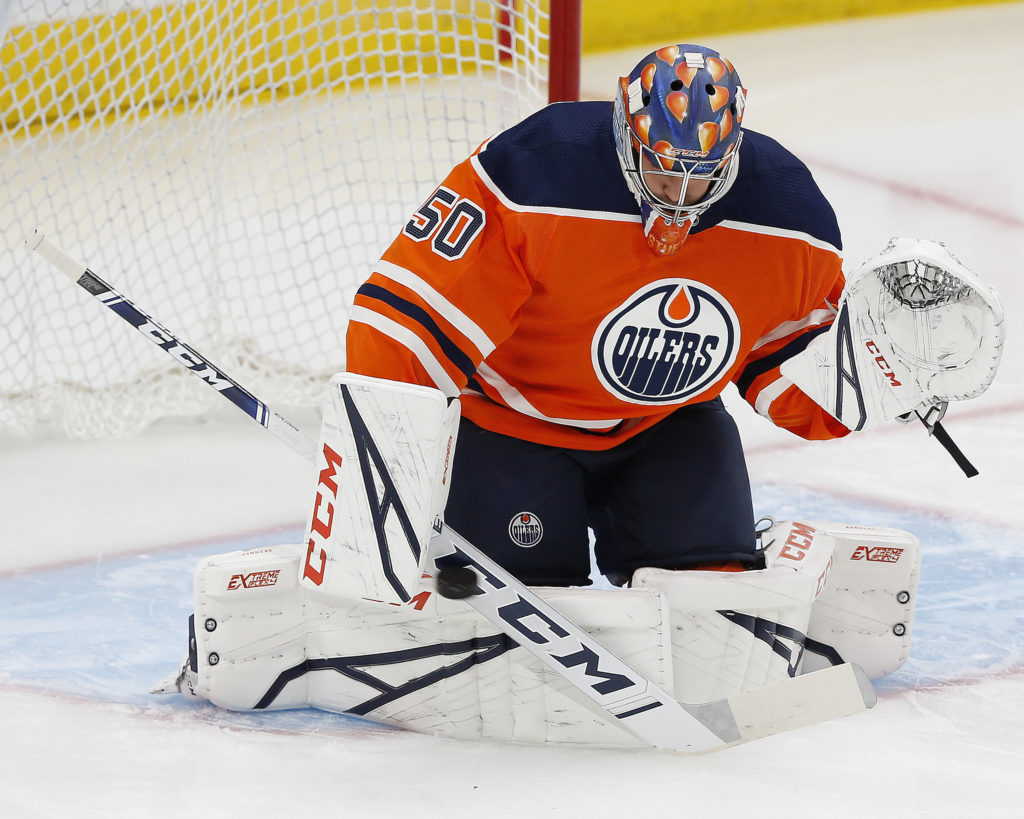 Sep 16, 2019; Edmonton, Alberta, CAN; Edmonton Oilers goaltender Stuart Skinner (50) makes a save during warmup before a game against the Winnipeg Jets at Rogers Place. Mandatory Credit: Perry Nelson-USA TODAY Sports
I don’t know if Skinner or anybody else in the system – veteran Alex Stalock is also hanging around – can do enough to displace Koskinen. He could be sent to the minors in Bakersfield because his contract has a NTC but not an NMC. Maybe Holland brings in an established veteran at some point. There’s also the chance that Koskinen puts together a solid season and rides out his deal.
Skinner and the others looking to take over the crease down the road don’t control any of that. All he can do is stop pucks, be it here or down in the AHL, and press the issue with Holland and coach Dave Tippett. It’ll be a helluva story if a hometown boy like Skinner can grab that backup job one way or another.