The Day After: Connor McDavid takes a stranglehold on the Art Ross Trophy race with four-point performance 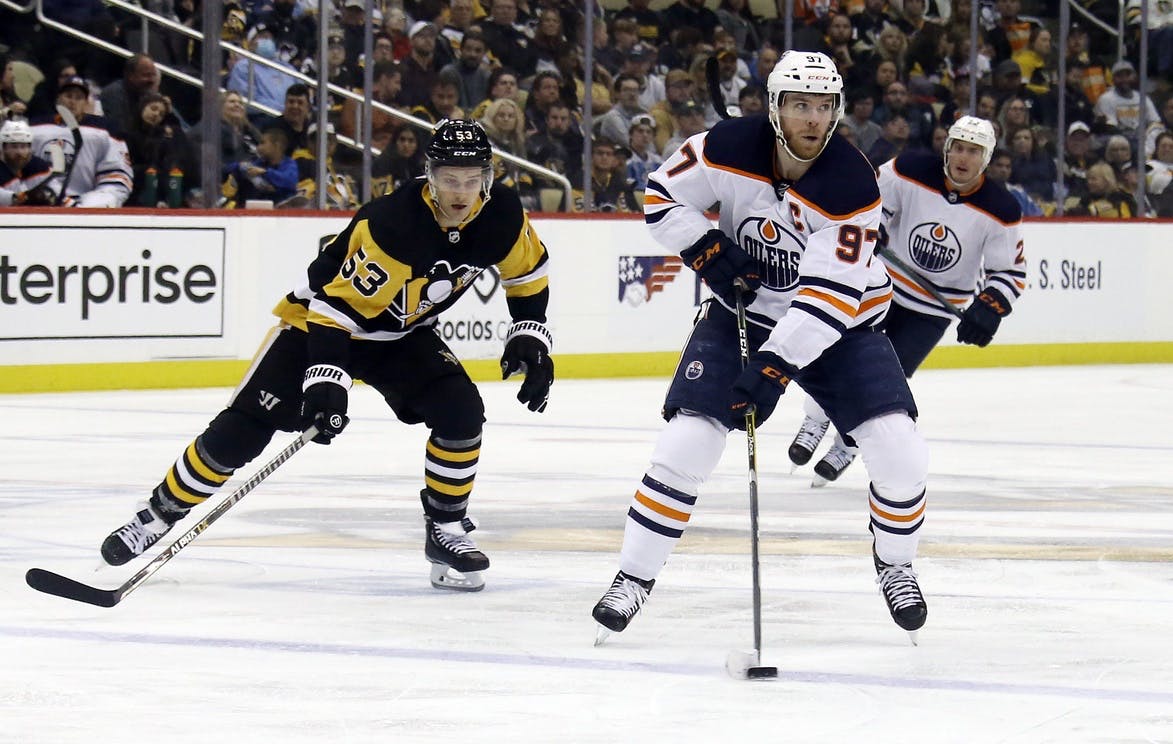 By Cam Lewis
6 months ago
After laying an eff on Sunday afternoon in Columbus, the Oilers bounced back with a complete top-to-bottom effort against a legitimate contender in the Pittsburgh Penguins.
The team got goals from five different players, the defence was able to completely shut down Sidney Crosby’s line, and Mike Smith stopped 33 of 34 shots in his return to the net. The Oilers won by a score of 5-1, sweeping their two-game season series with the Penguins by a combined score of 10-3.
Leading the way for the Oilers was Connor McDavid, who exploded for four points in the win. He picked up assists on goals scored by Evan Bouchard, Evander Kane, and Zach Hyman, and then sniped a gorgeous goal of his own for good measure.
McDavid’s four-point showing vaulted him into a commanding lead for the Art Ross Trophy as Jonathan Huberdeau was held off of the scoresheet in the Florida Panthers’ loss to the Boston Bruins. McDavid’s 44 goals and 122 points are both a career-high and Huberdeau is now seven points back of Edmonton’s captain with two games left each on the schedule.

“A quiet four-point night? A loud four-point night? I don’t know. It’s just normal, right? He makes so many plays on the ice that don’t result in goals. He probably could have had a couple more points. He’s such a dynamic player. He’s the best player in the world. That’s what you expect. That’s what you get. I’m glad he’s with us. I’m glad I’m here.” – Zach Hyman on Connor McDavid.
“That’s what the best players in the world do. They rise to those occasions What he’s doing here with this season … there’s almost a consensus that it is just McDavid being McDavid. That’s what he does. But he’s at a career high, he’s driving our team and he’s playing the game the right way. He’s driven to win.” – Jay Woodcroft on Connor McDavid.
“That performance you saw tonight against a really good hockey team. It was four lines contributing for all 60 (minutes), a goaltender that was on his game, special teams were firing … It was a complete 60 for us versus a team that had something to play for.” – Jay Woodcroft on the team’s performance.