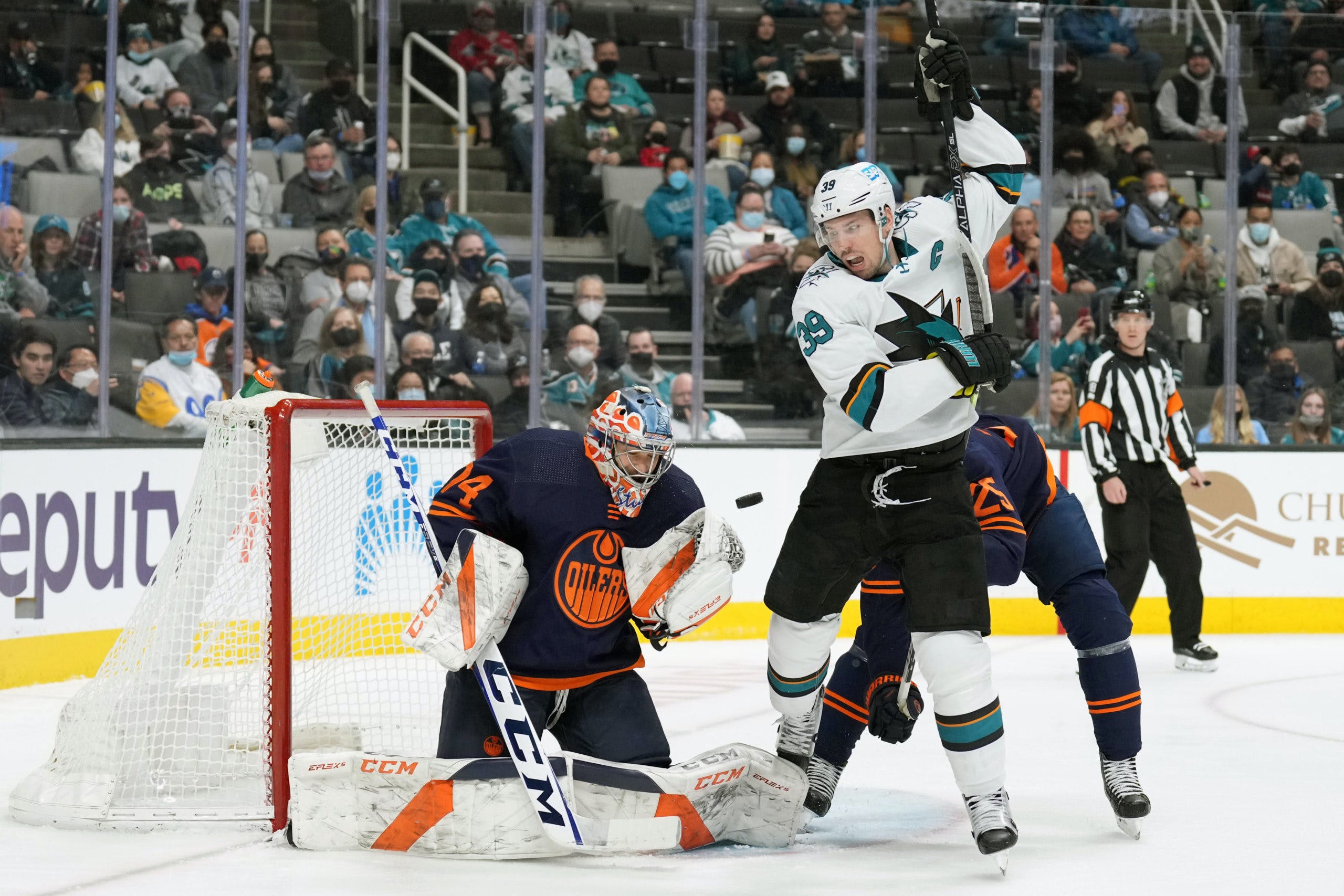 By Zach Laing
11 months ago
Hockey is often a sport of chaos. Sometimes good, sometimes bad, sometimes almost hilarious.
For the Edmonton Oilers Monday night, it was the good kind of chaos that led to their 3-0 win over the San Jose Sharks.
The chaos, mind you, came from the form of a few bounces. Just 6:05 into the game, an Evan Bouchard does a double doink off Derek Ryan and Warren Foegele and into the net, the latter of the trio getting credit for the goal.
Then, 55 seconds later, a Darnell Nurse shot off a draw doinks in off a Shark.
“I thought we played a full 60 minutes. There were times where the other team had some chances, but we really, really liked the commitment to the defensive side of the puck, the commitment to working back to our side of the puck,” said Oilers head coach Jay Woodcroft after the game. “It was impressive to see those players put in the work they put in. It’s not easy like that, but they did a good job for us tonight.”
The Edmonton Oilers have been on the receiving end of these moments in games as of late with puck luck playing its part in some brutal performances.
But luck isn’t all that went right for the Oilers last night: they played a hard game. In all three zones, Edmonton was simply the better team in what was Jay Woodcroft’s return to San Jose — a city where he cut his teeth for seven years as an assistant coach.
While San Jose jumped out with a frantic start firing the first six shots on the net, it was the Oilers who scored on the seventh shot of the game. And then after Nurse got number two, it was all Edmonton.
But the Oilers couldn’t of gotten there without a 20-save shutout performance, the first of his career, from Stuart Skinner.
“I thought Stuart stood tall when we needed him right off the bat,” said Woodcroft. “I think it’s a habit of this team in this building is they come out very, very hard. Stuart was ready and it’s a big feather in his cap to get his first NHL shutout.”
Skinner didn’t have to make many saves, but the ones he did were key. Like weathering the storm in the first five minutes, and staying strong amid a third period where the Sharks threw everything and the kitchen sink at him.
“He was unbelievable,” said Darnell Nurse after the game. “Earned his first-ever shutout in the NHL which is a huge accomplishment.
“It’s something he’s worked hard for. There were some moments where they had clean looks and he came up huge. (He’s) a big reason we won that game.”
By the end of the game, it was clear who the better team was. At 5×5, the Oilers controlled a staggering 71.79 percent of the shot attempts, 68.29 percent of the scoring chances and 70.1 percent of the expected goals.
The Oilers will keep rolling tonight with another late-game against the LA Kings.

SAN JOSE – The Sharks fans that showed up to Monday’s game with the Edmonton Oilers didn’t have much love for Evander Kane, showering him with boos every time he touched the puck.
What was missing from the announced crowd of 11,153 at SAP Center were opportunities to cheer for their own team, as the Sharks’ offense was stifled in a 3-0 loss to Kane and the Oilers on Valentine’s Day.
The Sharks, coming off a 12-day break between games, finished with just 20 shots on net on Oilers rookie goalie Stuart Skinner, who earned his first career NHL shutout. The Sharks have now been shut out five times in 47 games this season.
“Normal, I think, attendance-wise for us this year. I don’t think us as players did a good enough job creating energy in the building,” Sharks captain Logan Couture said. “I thought we were flat. It’s tough for the fans to get into it when we’re not playing well.”
Kane, who played for the Sharks from 2018 to 2021, had four shots on goal in 18:51 of ice time. Warren Foegele, Darnell Nurse, and Connor McDavid all scored for Edmonton, which handed the Sharks their sixth loss in seven games dating back to Jan. 20.
Sharks forward Rudolfs Balcers was injured late in the second period as he blocked a shot by Oilers defenseman Cody Ceci and did not return. Sharks coach Bob Boughner did not have an update on Balcers immediately after the game.
Goalie James Reimer had 36 saves in the loss, which kept the Sharks (22-21-4) seven points out of both third place in the Pacific Division and the Western Conference’s second wild-card spot.
San Jose’s three-game homestand continues with games against Vancouver on Thursday and Vegas on Sunday.
“Obviously, (the fans) kind of got on (Kane) every time he touched the puck,” Reimer said. “But no, I mean, there’s always these little storylines and stuff like that. But for us, this is an important game. It’s a four-point game. We’re (seven) points out of the playoffs here and we need points.” – Curtis Pashelka, Mercury News