The Edmonton Oilers are too soft 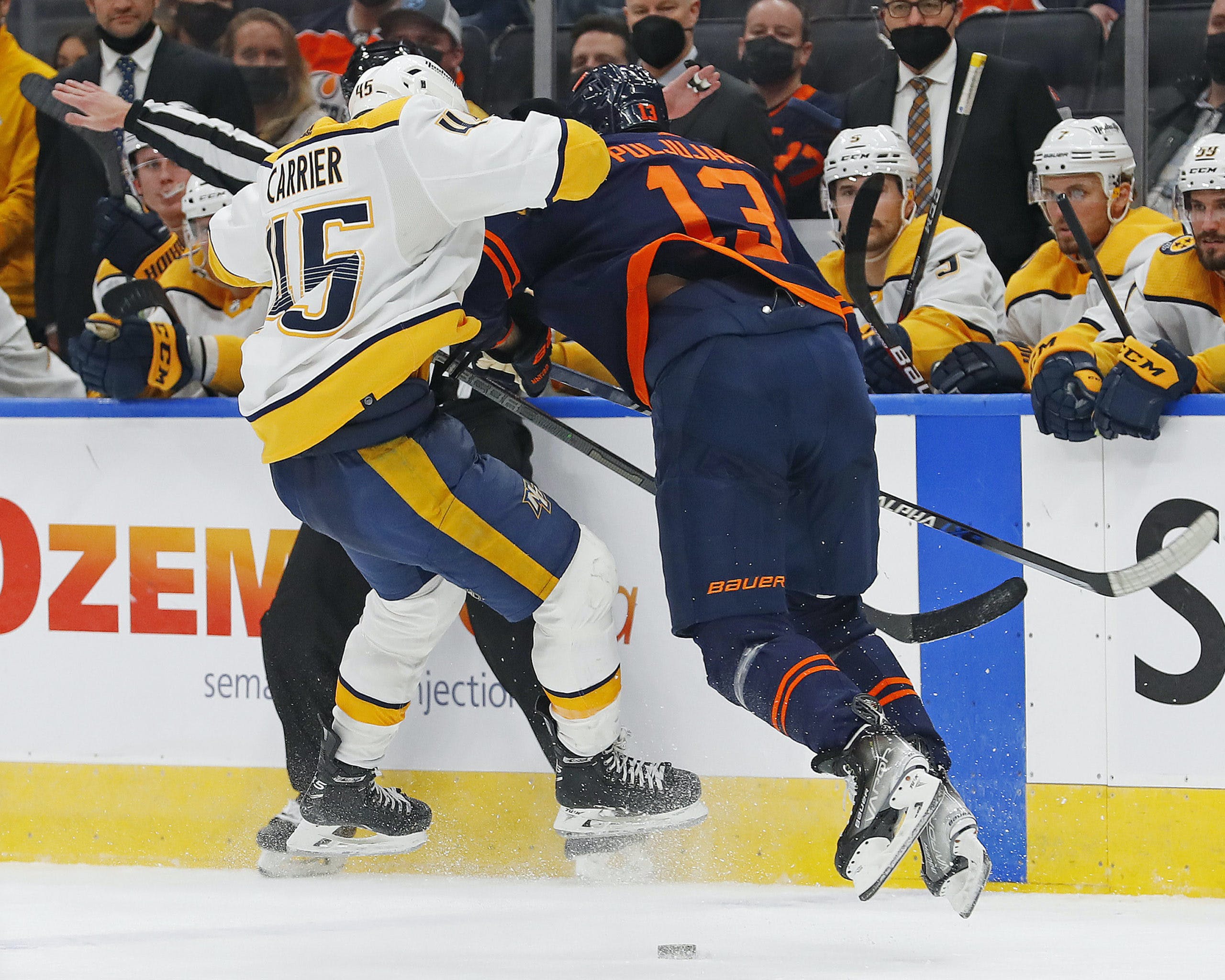 By Zach Laing
9 months ago
Honestly, I never thought I’d write an article like this.
I’m typically not a believer in “a big team,” rather than having a strong mix of two-way players who can be offensive contributors and defensive stalwarts.
I also don’t think that you can ask smaller players to play a “big game.”
But the truth of the matter is the Oilers are far too soft to play against. They have no bite. They have no fight. It was on full display last night against Vegas.
As I wrote about in The Day After, Mike Smith got crashed into and potentially injured late in the second period when Devin Shore drove Evgenii Dadonov into the netminder. Sure, it was a self-inflicted wound, but that’s an instance where someone should be roughing up Dadonov, even if it wasn’t his fault.
With a smidge over three minutes left in the game, it was Mattias Janmark crashing into Smith, who took exception to it. Darnell Nurse got in his face and was ready to drop the gloves, but a linesman stepped in to break it up.
This isn’t Oilers hockey.
Even beyond instances like this, the Oilers don’t have any grit and grind on their backend. They don’t have a big, shutdown defenceman who can be a vacuum in his own end. They don’t have anybody up front who can be a consistent, imposing, physical player up front.
There are three players the Oilers lost in free agency, in my eyes, that weren’t able to be replaced internally: Jujhar Khaira, Adam Larsson, and Dmitry Kulikov.
Khaira was far from the best player at 5×5 for the Oilers, and I understand why the club moved on from him. Despite being one of the best penalty killers in the league he was a black hole in the worst possible way at 5×5. Khaira, however, was the Oilers most physical forward last season. He laid 22.07 hits per 60 minutes at 5×5 — four more than the second-placed Josh Archibald and eight more hits per 60 than Zack Kassian.
While Evander Kane has come in throwing the body to the tune of 19.24 hits/60, the next closest Oilers are Kassian (13.33) and Tyler Benson (11.76). Laying lots of hits often means you don’t have the puck much, but it’s an invaluable part of team play.
Larsson’s play has been missed sorely. He left the Oilers in the expansion draft/free agency for greener pastures in Seattle, and you can’t blame him one bit for the deeply personal reasons he did. But the Oilers haven’t replaced him and it shows. He was by far the most physical Oilers defenceman laying 9.31 hits/60, two more than Kulikov and 3.5 more than Nurse. At 5×5, Larsson was a black hole in the best possible way. He was a vacuum in the Oilers zone and consistently broke up cycles and play with his physicality.
Kulikov, who was acquired at the trade deadline, offered up much of the same as Larsson. The Oilers decided to let him walk and instead brought back Slater Koekkoek on a two-year deal. No knock on Koekkoek, but he plays a vastly different game than either of the two aforementioned rearguards.
In the offseason, the Oilers made no effort to try to replace either of these defencemen with players of a similar ilk, and it shows. Cody Ceci has been fine for the Oilers, but he’s not the defensive stalwart Larrson has been.
Above all the other issues that have arisen for this team, the Oilers need to find a way to beef up their lineup. It can’t be done by solely acquiring big players, but big players who can be effective.
Zach Laing is the Nation Network’s news director and senior columnist. He can be followed on Twitter at @zjlaing, or reached by email at zach@oilersnation.com.
Nation Takes
News
Oilers Talk
Recent articles from Zach Laing