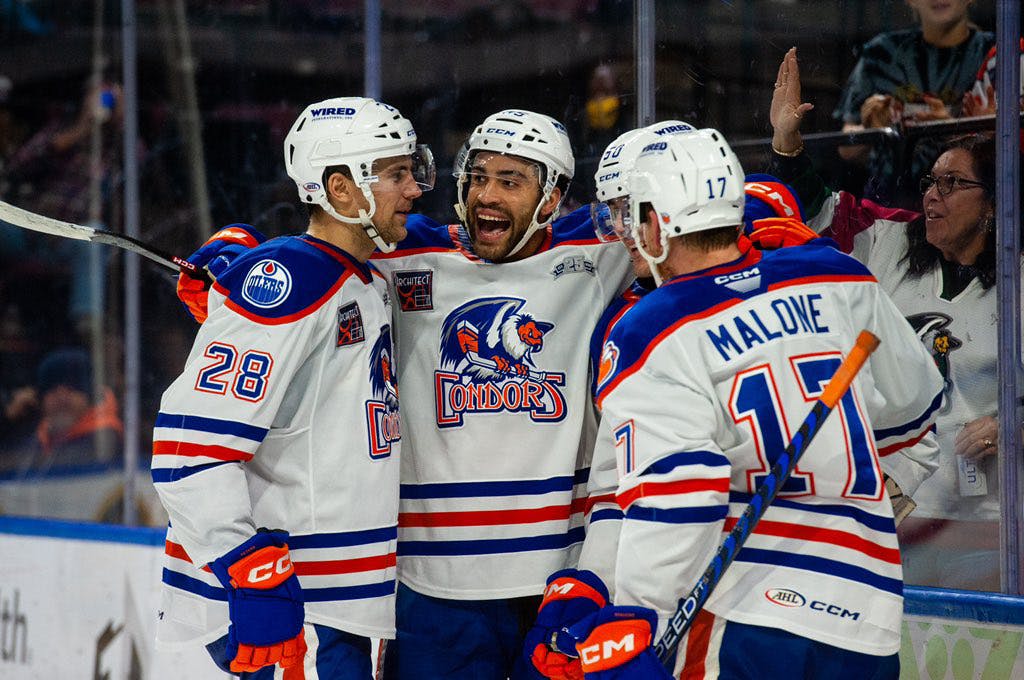 By Bruce Curlock
18 days ago
When the calendar year turns over at midnight on December 31st, people celebrate the opportunity for a new beginning. Hockey is no different. Especially in the minor, collegiate and junior ranks. Every team has players looking for that path to the NHL. Sometimes the path is clear and wide and quite short, but for the vast majority, it is a winding, rocky and long journey. So with 2023 upon us, we begin with a player on the more difficult path, who got a new beginning just this week.

Who Caught My Eye

News came down Friday that Justin Bailey signed a two-way NHL contract with the Oilers after having signed an AHL deal with the Bakersfield Condors in the off-season.
If you know about the path of Justin Bailey, this new beginning has been a long time coming. A second-round pick in 2013, Bailey’s career has been riddled with injuries and organizational changes. When it looked as though he may have caught on with the Vancouver Canucks, along came the COVID-shortened season and more injury trouble. Bailey finished last season with a shoulder injury suffered at the hands of Milan Lucic that required off-season surgery. This season started late for Bailey due to recovery from the surgery resulting in Bailey playing only sixteen games. In those games, he has four goals and six assists for ten points. In addition, he has twenty-two penalty minutes and is averaging almost three shots per game. Not overwhelming, but he has been coming hard in recent weeks. In his last four games, he has five points, all assists, and is averaging over four shots per game. Without a doubt, he has been the best Condor in that period of time.
So what do the Oilers have in Justin Bailey? The first thing to note is Bailey is twenty-seven years old. So what you see with Bailey is almost assuredly what you will get from here on out in his career. Now that doesn’t mean there he cannot contribute at the NHL level. It just means that what you see now is what you are going to get.
The second thing to note about Bailey is this is a big, athletic man who can bully players around the ice. He’s 6’4″ and 215 pounds, skates incredibly well and can be ill-tempered. This clip below summarizes what Bailey can do. I picked this clip because it is against the Calgary Wranglers, who are a notoriously physical group, that had beaten the Condors 9-2 the game before. Bailey did not play. I thought Bailey was a big reason why this game was far more competitive. Shifts like this were a big part of the reason.
When I look at the technical parts of Bailey’s game, I remain awed by his skating for such a big man. Looks at the “McDavid crossover” that Bailey can execute. This is legitimate NHL speed coming from a very big body.
Bailey also has some good puck skills. Now, I think the skills are more a product of his ability to skate into seams with the puck and then create more time and space for himself using his body, but his hands are quite good. This first clip is a really good example of how he uses his skating and then his body to generate offence.
This second clip is just a great demonstration of how Bailey’s quick push gets him into good spots. He starts this play deep in his zone and jumps into a great spot to create an opportunity  Bailey then finishes with a very nice, and quite generous, play to Lavoie. The little back pass in tight is really quite impressive especially since he had the option to go backhand shelf on the shot.
Obviously, there have been issues that have held Bailey back and most importantly, injuries have plagued his career. In terms of on the ice, Bailey’s play can be inconsistent. Not a particularly uncommon critique of bigger, faster players. Sometimes, the game comes easier to them. Occasionally, this translates into a lack of urgency for a period of time. Watch this fifteen-second clip where you can see both sides of Bailey here. The first portion of the clip illustrates some of the lack of urgency with big loops, half-speed skating and passive defending instead of start-stop explosive stick-on-stick and body-on-body defending, then watch the last part of the clip where Bailey sees a loose puck. In less than four seconds, Bailey helps clear the puck from danger and the Condors exit the zone. When Justin Bailey is on, he can impact every shift.
Bailey also has a habit of not using his teammates like he should resulting in turnovers to defenders. Now, I don’t think it is selfish play by Bailey. What I notice often is that Bailey skates himself into spots so quickly that he is through the good space and into new challenging space before he can decide what to do. Not having watched any of his NHL games, I can only guess this may have been an issue because in the NHL as the good space gets even smaller and the bad space takes it place more rapidly. This will be something that needs to be watched. Nevertheless, the Oilers have signed a player who assuredly can play in a fourth-line role in the NHL and I believe make a contribution.

The more I write about Raphael Lavoie, the better. This has nothing to do with me and everything to do with Lavoie. In many ways, he’s a kindred spirit of Justin Bailey. Both were second-round picks. Both are big bodies. Both ooze excellent skills that are the equivalent or better of many smaller players.  Both battle inconsistency and injury.  Like, Bailey, Lavoie’s New Year has started with a bang. One game, two goals and six shots on net. More importantly, in his last six games, Lavoie has four goals and two assists. This is a player, when he’s invested in the game and healthy, that makes his presence felt every shift. This week, his two goals were a lot of strong work by his teammates. Most notably Justin Bailey as seen below and less about him.
To be frank, though, I don’t care how he scores and neither should you. He was drafted to be a scorer and he can be a scorer. How a player scores is irrelevant to me – just do it. See Ryan Smyth as exhibit A. For Lavoie, the key is that he’s been working very hard off the puck even when he isn’t rewarded. Shockingly, doing hard work now often leads to rewards later. Here is a clip (apologies for the McDonald’s advertising) of this exact concept. Watch Lavoie work to gain the puck, which he subsequently then turns into opportunities for himself and his teammates. Did the puck go in, no. However, as the math tells us, if you can generate more chances, the puck will go in eventually.
I go back to my opening statement. When I am writing about Raphael Lavoie, he’s getting closer to the NHL and that has everything to do with him. This is two weeks in a row. It will not hurt my feelings if I get writer’s cramp spelling Lavoie’s name for another 12 consecutive weeks.

Philp also started the New Year with a bang. In his only game, he had four shots and scored on an absolute laser of a wrist shot from distance against the Ontario Reign. Philp had an up-and-down start (don’t say “like toilet seat!”) to his pro career with the Condors. He’s been a healthy scratch and he was jettisoned to the fourth line on many nights in the first half. Slowly, he has moved his way up the ranks. He now is a regular penalty killer. Whether it is a coincidence or not, the penalty kill has improved with his presence. He also routinely centers the PP2 for the Condors.
As many know, I have optimism about Noah Philp’s chances. He’s a very smart player who has excellent size and happens to be a right shot. There was concern about his skating and I can understand that, but I think his skating is good enough to get him there. What his boots lack, his brain will more than make up for. What I wasn’t aware of were two things that were on display this week. His forecheck skills and his shot.
In terms of his forecheck, Philp has a lot of great qualities. He’s got a heavy stick, a motor that doesn’t quit and great size. Watch this clip.
Here is another example that is less about his physicality and more about his smarts. He reads a 1v2 and sees his teammate on the left wall back out to his defensive position. He steps down hard and retrieves the loose puck and sets up a teammate for a great look.
Finally, I want to show the clip of his goal twice. The first is for this very smart forecheck read. Watch Philp’s head turn and read the defender’s intention with the puck. Many players might just put their head down and race back to a neutral zone defensive position, but Philp has the presence of mind to watch the defender with the puck. Was it a bad pass, for sure. Would it have led to a scoring chance, and in this case a goal, if Philp isn’t reading the play – no.
Finally, let’s watch the clip again for the goal. I’m sorry folks, but scoring against AHL goalies from distance with a wrist shot off his weak side needs to be celebrated. That is a legit pro release that has, and will continue to cause grief for goalies. Philp just needs to keep shooting.
For each of these players, the New Year has started off with a bang. Let’s watch and see how the rest of the season develops for them and their fellow Oiler prospects. Thanks again for reading and for those in Calgary, see you at the Condors game on Sunday against the Wranglers.
Featured
Nation Takes
Oilers Talk
Recent articles from Bruce Curlock