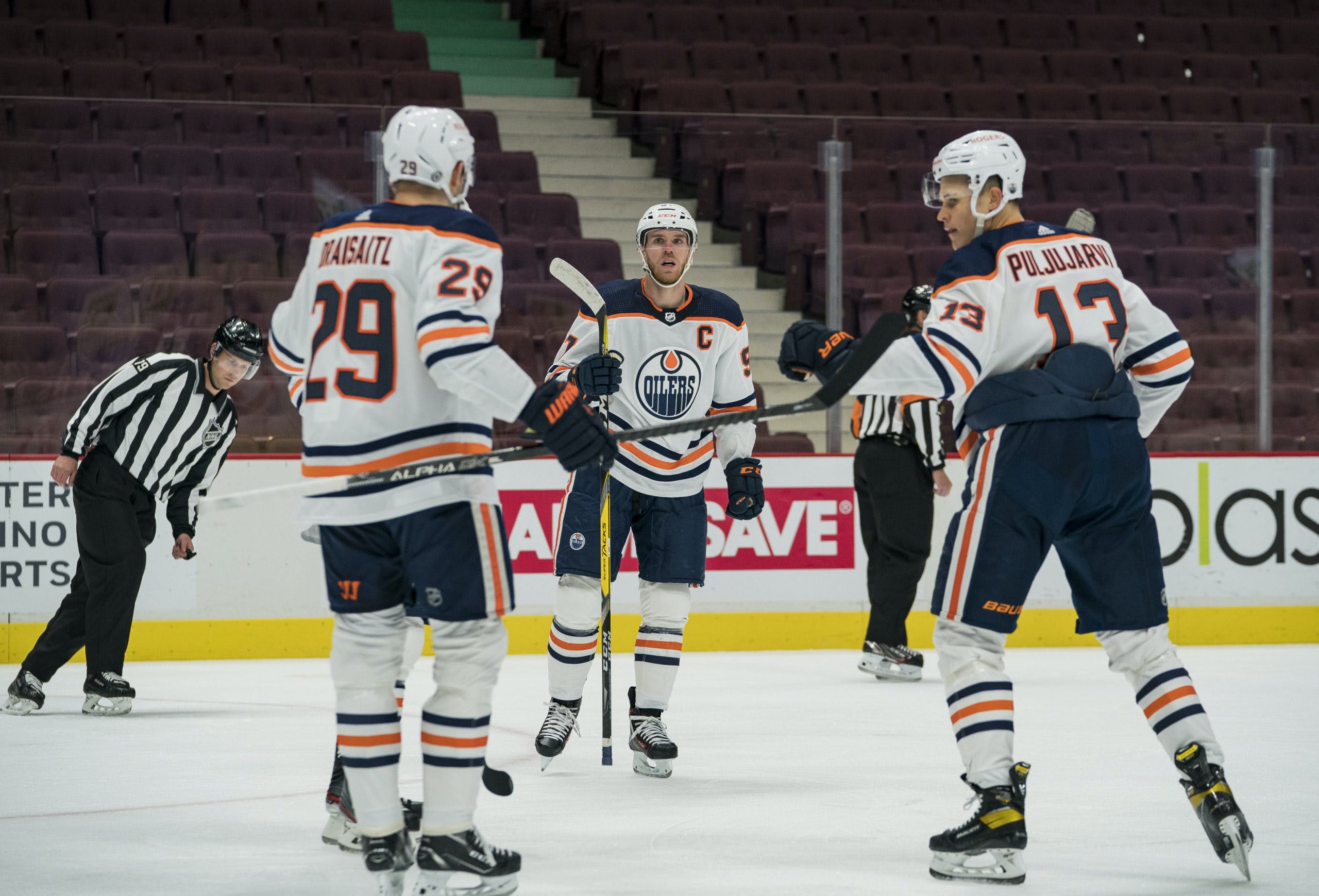 By Robin Brownlee
1 year ago
I’m not sure if it’s a case of “great minds think alike” or a matter of “fools seldom differ,” but I’ve got to admit I was surprised to see Jason Gregor pick the Edmonton Oilers to win the Pacific Division today. That makes him part of a distinct minority among media folks offering up their best guesses going into the 2021-22 NHL season.
Before I read Gregor’s piece picking the Oilers to win a divisional title for the first time in 34 years, I’d just finished reading the picks of an 18-member panel at Sportsnet. Only two people, Jeff Marek and Gene Principe, picked the Oilers to win the Pacific Division. Hell, Gene has the Oilers winning the Stanley Cup.
While I’d been leaning toward taking the Oilers to win the Pacific before I saw any of those picks, I’d been looking at it as a coin flip with Vegas. What I didn’t get was seeing 15 of 18 panelists picking Vegas – Principe and Marek picked Edmonton, while David Amber picked Vancouver. Vancouver?
Pre-season predictions are fun because when you’re wrong, which I’ve been more often than not for 35-plus years, your picks are six months old and ancient history. When you’re right, your selections are ONLY six months old and you have a link to them handy. Who doesn’t like to say, “I called it?” So, let’s get on with it. Here’s why the Oilers will win the Pacific Division. 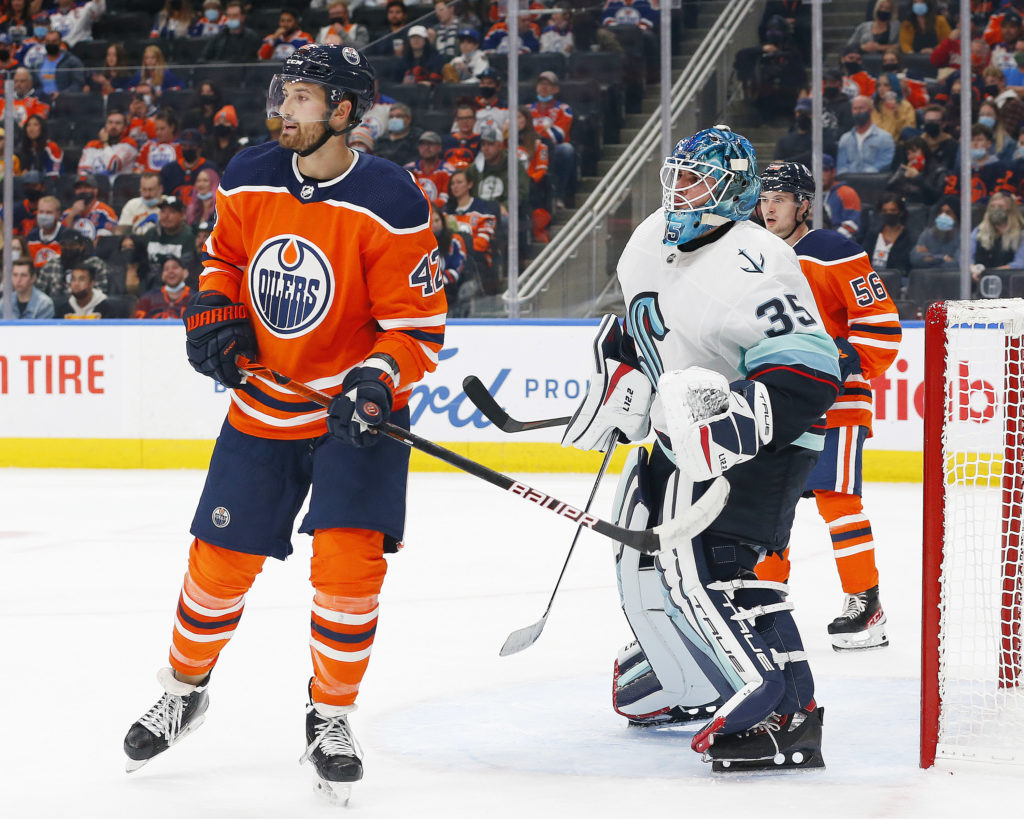 Sep 28, 2021; Edmonton, Alberta, CAN; Edmonton Oilers forward Brendan Perlini (42) tries to screen Seattle Kraken goaltender Joey Daccord (35) during the third period at Rogers Place. Mandatory Credit: Perry Nelson-USA TODAY Sports
Forward depth? Thanks, Captain Obvious. What I like most about the acquisitions of Zach Hyman, Warren Foegele, Derek Ryan and Brendan Perlini isn’t just that it adds depth to a bottom six group that was too often out-gunned last season, it has potential to have an impact on the top six. First, Foegele, Ryan and Zack Kassian look like they can be a solid third line.
Just as important, the addition of Hyman gives coach Dave Tippett options on top. If Tippett moves Leon Draisaitl up alongside Connor McDavid and Jesse Puljujarvi, he can move Hyman, who is a real puck hound, to a second line with Ryan Nugent-Hopkins and Kailer Yamamoto. If Tippett wants Hyman on top, he’s got RNH, Draisaitl and Yamamoto as his second line. That’s a better top six, whatever the configuration, as Tippet has had here. The third line aside, Tippett has a guy like Perlini on his fourth line.
All the above aside, what are the odds we could see career highs for points from Hyman (41), Foegele (30), Puljujarvi (25) and Yamamoto (26)? Pretty good, if you ask me. Speaking of career highs, how many points for McDavid on the way to another Art Ross Trophy? Is 150 points out of the realm of possibility?

Here and now, I like this blueline group with the additions of Duncan Keith and Cody Ceci better than the group that started last season’s 56-game schedule. There’s a fair debate to be had about that, but I like this mix better because having Darnell Nurse, Tyson Barrie, Keith and Ceci as the top four provides more experienced cover for Evan Bouchard, who’ll start in the third pairing but won’t finish the season there.
Nurse, with a new contract done, is in primetime. His partner, Tyson Barrie, doesn’t get a lot of respect in some corners, but all he does is put up a lot of points. He led NHL D-man in scoring last season. I like the idea of Keith playing closer to 20 minutes a game rather than the time he logged in recent seasons. Reduced minutes can be a case of less translating to more. I like Keith’s experience. On the ice and in the room. I like his moxy. I think he can make a difference bringing Bouchard along. 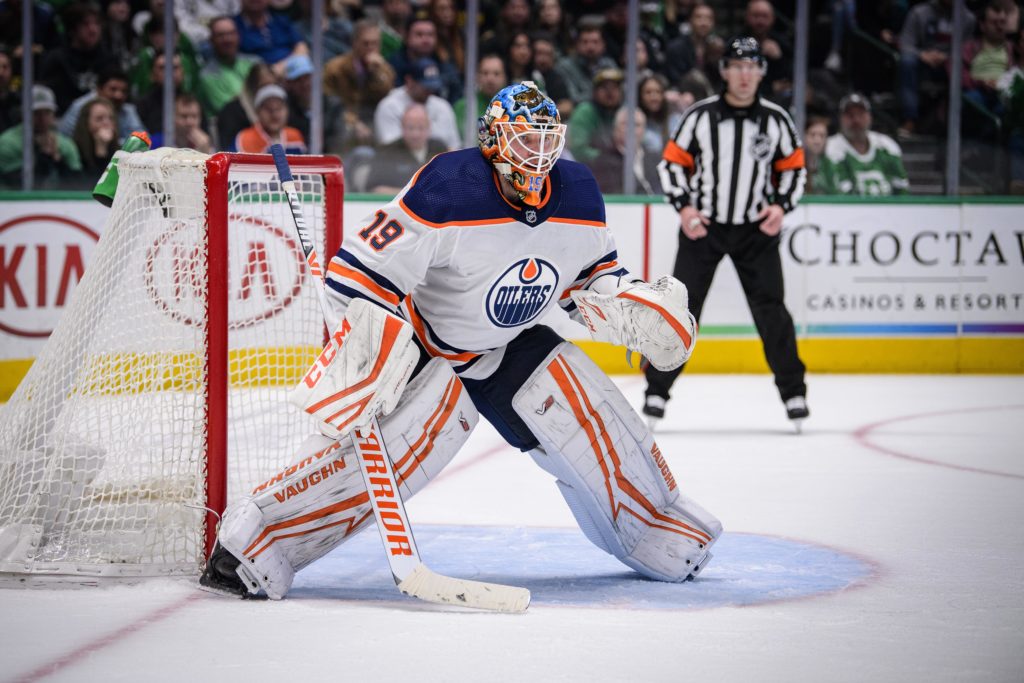 Mar 3, 2020; Dallas, Texas, USA; Edmonton Oilers goaltender Mikko Koskinen (19) in action during the game between the Stars and the Oilers at the American Airlines Center. Mandatory Credit: Jerome Miron-USA TODAY Sports
I know Mikko Koskinen catches a lot of crap for giving up goals on first shots of the game — not to mention four goals on four shots right out of the gate in one game — but he’s better than what we saw last season when he had to carry the load in the first dozen games with Mike Smith injured. I’m not hitching my wagon to Koskinen, but he’s got more game than .899. Even a bump back to his career .907 will make a difference.
Smith was flat-out stellar at times in 2020-21. Warts, age (Smith is 39) and all, Koskinen and Smith are capable of giving the Oilers competitive and occasionally terrific goaltending as they did last season — the Oilers were top-10 (seventh) in save-percentage and 11th in goals against. With the right split of games and fewer ups and downs from Koskinen, goaltending that’s in the top-third of the league will give the Oilers a chance.

It’s Edmonton and Vegas neck-and-neck from wire to wire. What’s the difference? For me, it’s not only that the Oilers have the best two players in the league in McDavid and Draisaitl, but that there is finally a supporting cast to provide depth scoring and balance. How good will Puljujarvi be? Let’s not forget Edmonton’s potent power play. Don’t be surprised to see a bounce back season from RNH. Add it up, it says here Oilers’ fans have a division winner on their hands. The puck drops at Rogers Place against the Canucks Wednesday.
TOP FOUR PACIFIC
Edmonton Oilers
Vegas Golden Knights
Vancouver Canucks
Calgary Flames
TOP FOUR CENTRAL
Colorado Avalanche
Winnipeg Jets
Dallas Stars
Minnesota Wild
TOP FOUR ATLANTIC
Tampa Bay Lightning
Florida Panthers
Toronto Maple Leafs
Montreal Canadiens
TOP FOUR METRO
Carolina Hurricanes
New York Islanders
Washington Capitals
Philadelphia Flyers