Weekly Rumours – Will the Oilers have a busy deadline? By Tyler Yaremchuk
9 months ago
We are officially less than a month from the NHL trade deadline, which puts a big smile on my face. These next few weeks will be full of rumours and trade talk. I love it. I cannot get enough of this kind of stuff.
This week, there were a few big stories to dig into.
First, Eric Duhatschek of The Athletic says that there have been reports coming out of the Czech Republic linking the Oilers to Chicago Blackhawks forward @Dominik Kubalik, who sits at #28 on his trade board.
On one hand, I can see why the Oilers would be interested in Kubalik. He’s only 26-years-old, he’s scored 57 goals in just 176 career NHL games, and he’s a pending RFA so he’d be under team control this summer.
Adding more scoring depth is never a bad idea and we know that Ken Holland would prefer to acquire players who can help for longer than just this season. I like Kubalik as a player but, I don’t think he’s what the Oilers need right now. Holland’s priorities should be adding a goalie and adding a shutdown defenseman, not adding more scoring depth.
The only way I could see Kubalik being a fit for the Oilers is if they have to move out a forward on their roster in order to fill another hole. For example, and I am strictly just playing armchair GM here, let’s say the Seattle Kraken are open to trading Carson Soucy but they want Kailer Yamamoto to be a part of the deal. Could the Oilers do that and then give up a draft pick to get Kubalik from Chicago? Something like that could make sense I suppose.
I just believe it would be foolish for Holland to go out and add a scoring winger when the team has limited cap space and clearly has bigger needs.
Perhaps the Oilers have interest in Calvin De Haan or another defenseman on the Blackhawks and there’s a bigger deal to be had here. I also think the Oilers should be looking at Morinville, Alberta product @Brandon Hagel. He’d be a perfect addition to their top-nine and he’s signed for two more seasons at a cap hit of just $1.5 million. The Hawks apparently want a first-round pick and a prospect for him according to Frank Seravalli but that price point might just be worth it.
Another defenseman I think the Oilers should be very interested in: @Mark Pysyk. He’s available, has a cap hit of just $900k, and is solid in his own end. The only issue is that he shoots right but if Ken Holland can find a taker for Tyson Barrie, then adding Pysyk in that spot would give the Oilers a player who is a better defender and makes $3.6 million less.
The more I look at what the Oilers could do ahead of the deadline, the more it becomes evident that finding a taker for Tyson Barrie is going to be very important. We’re once again hearing the term “money in, money out” when it comes to the kind of deals Ken Holland could pursue and with @Zack Kassian on the shelf, it’s clear that Barrie is the contract that the Oilers should be most aggressively trying to offload. @Mikko Koskinen is obviously another candidate but getting away from Barrie’s $4.5 million cap hit would also make life a lot easier for the Oilers this summer.
Here are some other stories from around the league that are worth keeping an eye on: 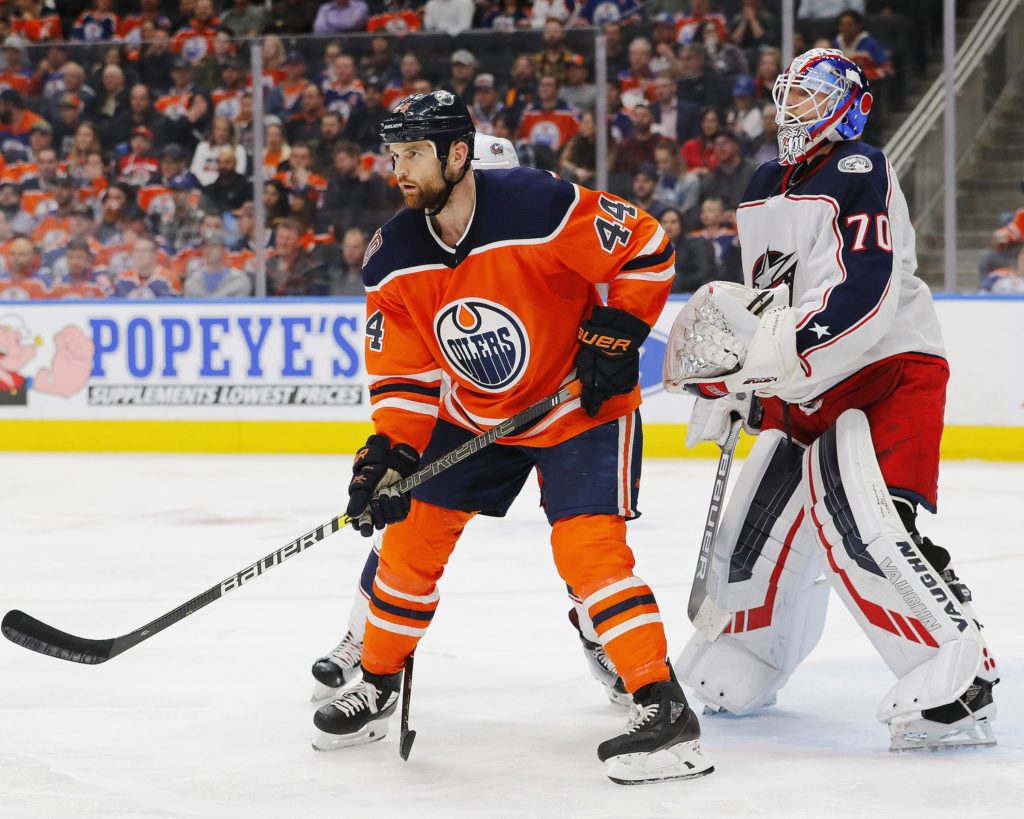 Mar 21, 2019; Edmonton, Alberta, CAN; Edmonton Oilers forward Zack Kassian (44) tries to screen Columbus Blue Jackets goaltender Joonas Korpisalo (70) during the third period at Rogers Place. Mandatory Credit: Perry Nelson-USA TODAY Sports
Frank Seravalli has five goalies on his most recent trade targets list: Marc-Andre Fleury, Alexandar Georgiev, Braden Holtby, Joonas Korpisalo, and Anton Forsberg.
From an Oilers perspective, Fleury is unrealistic simply because it doesn’t sound like he would come to Edmonton. Korpisalo simply isn’t good enough to be considered an upgrade on either Koskinen or Smith. You can scratch both of those names off the list.
I have a lot of time for Alexandar Georgiev but, I wonder if the Oilers are maybe more interested in a short-term solution? Both Skinner and Smith are under contract for next season so I’m not sure if it makes sense to bring in a young, pending RFA at the deadline.
That basically leaves just Holtby and Forsberg. Both of these players have better numbers than Koskinen and Smith and they each make significantly less money than Koskinen. Holtby has a cap hit of $2 million and Forsberg is at $900k. If the Oilers gave up enough in the deal, maybe one of those teams would eat Koskinen’s cap hit and give the Oilers enough cap space to not only get an upgrade between the pipes, but also go out and get a defenseman.

WILL THE JETS SELL?

The Winnipeg Jets have two pending UFA’s that will be drawing some serious interest ahead of the trade deadline. 27-year-old Andrew Copp is the type of player that every contender would love to add into their lineup. He’s on pace for close to 20-goals and brings an element of physicality. The Jets could potentially get a first-round pick for him.
There would also be a lot of teams interested in veteran forward Paul Stastny.
As of right now though, it’s unclear if the Jets will be sellers or not. There are currently four teams standing between them and the final wild-card spot in the Western Conference and if the Jets don’t start stringing together some wins in a hurry, then it will be tough for GM Kevin Cheveldayoff to not seriously consider moving out the two pending UFAs. I also think that Brendan Dillon would draw some serious trade interest.
Frank Seravalli has also talked about the future of Mark Schiefele. A trade before the deadline would be unlikely but if the Jets miss the playoffs, this could very well be his last season in Winnipeg. They would have to make some big changes.