By Tyler Yaremchuk
1 month ago
It’s been a while since I’ve tackled a Weekly Rumours blog here at Oilersnation but as we creep closer to the holiday trade freeze, there are some interesting rumours starting to percolate around the league.
In Edmonton, there is one name being mentioned more than anyone else right now: Joel Edmundson.
The rumour mill has been set on fire with talk that the Oilers would love to get their hands on the rugged Canadiens defenseman. There have been a few reports saying that the ask from Habs GM Kent Hughes would involve a first-round pick. Some are saying it could cost the Oilers Xavier Bourgeault and a second or third-round pick.
My take: that is insane.
At last season’s trade deadline, the Oilers acquired Brett Kulak (with money retained) for a second-round pick and William Lagesson. It was a great deal and I do not view Edmunson as that much more of a better defenseman than Kulak. He’s better, but not so much more impactful that he’s suddenly worth a first-rounder.
Also, Edmundson has another year left on his contract at a $3.5 million cap hit. For some teams, that would increase his value but I don’t think the Oilers should be interested in rentals. The left side of your defence next season is more or less set with Darnell Nurse, Brett Kulak, and Phillip Broberg. Right now, I see the reasoning behind needing an upgrade on Broberg but you can’t block him from the lineup in 2023-24.
I would stay away from Edmunson and instead target someone like Vlad Gavrikov in Columbus. Even if the cost was the same and you needed to bite the bullet and pay for a defenseman, I’d prefer Gavrikov.

Will we ever stop talking about Jesse Puljujarvi? No, probably not.
Even if he were to turn around his season starting right now, the conversation would simply turn into a debate about whether or not the Oilers should be trying to sell him off while his value is high. It’s a mess.
Here’s what I believe: Jesse Puljujarvi has what it takes to one day be a consistently productive middle-six NHL winger. It just won’t be here in Edmonton.
His comments from earlier this week in a Finnish piece were very hard to read and he clearly needs a fresh start. For everyone’s sake, the Oilers should be looking to move him. That appears easier said than done though.
His $3 million can be spent on someone that brings something a little bit different to the bottom six and while he may not have a lot of value right now, I don’t think it will be hard to move him closer to the deadline. I think you could find a rebuilding team that’d be intrigued by the chance to get Puljujarvi in their system for the final month or so of the season. 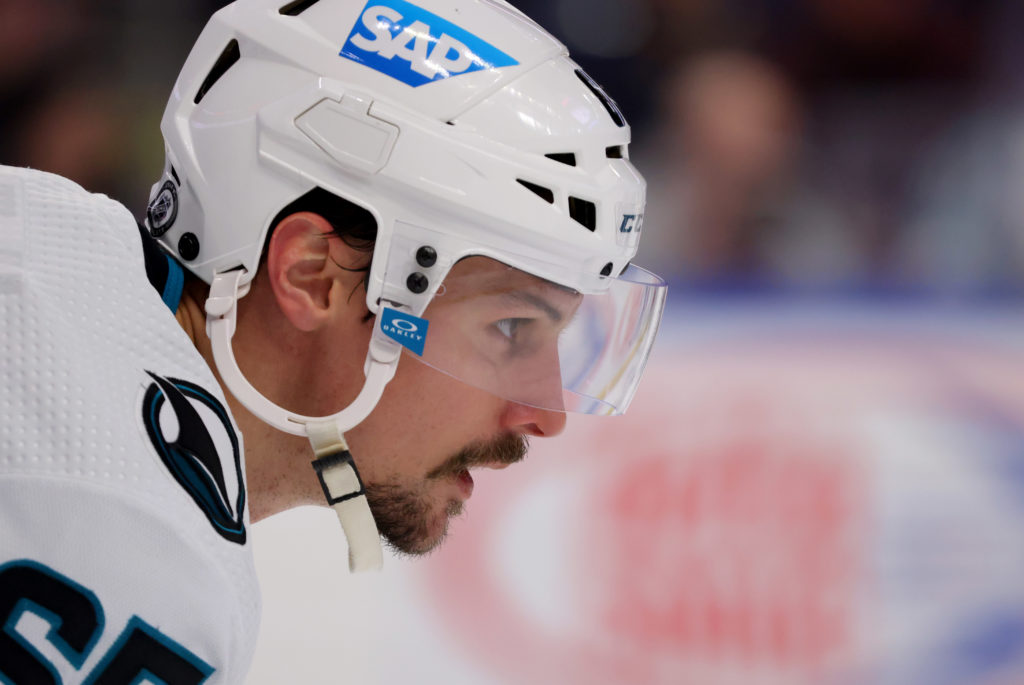 Dec 4, 2022; Buffalo, New York, USA; San Jose Sharks defenseman Erik Karlsson (65) waits for the face-off during the second period against the Buffalo Sabres at KeyBank Center. Mandatory Credit: Timothy T. Ludwig-USA TODAY Sports
The third rumour that has dominated these parts is all the talk about Erik Karlsson. Darren Dreger lit Twitter on fire when he said on Insider Trading that there are some in the Oilers organization who think they should be targeting.
He has four more years on his deal with an $11.25 million cap hit. That’s pricey.
For the Oilers to make that work, the Sharks would either have to keep about half of his contract, which would be a lot of dead weight for them to carry for the next four seasons. Or the Oilers would have to move out substantial salary. It doesn’t seem realistic.
Insider Frank Seravalli agreed with that, telling me on Oilersnation Everyday that he doesn’t believe the Oilers are actually interested in Karlsson. He also threw out an interesting trade proposal.
The Oilers receive Erik Karlsson at 50% retained in exchange for Jesse Puljujarvi.
Frank was told the Oilers would say no to that hypothetical trade. Crazy to me, but it speaks to how low Karlsson’s value is and it’s all because of his contract.
I agree with that. The Oilers have Bouchard and Barrie, who are both offence first right shot defensemen. They don’t need to add Karlsson.
Even though he’s much better at transporting the puck and is overall a more impactful player, I don’t think they need to spend the cap space necessary to get Karlsson. They need to go get someone who’s better at straight-up defending. That should be the focus, not on adding another high-end offensive piece.
Editorials
Featured
Oilers Talk
Recent articles from Tyler Yaremchuk