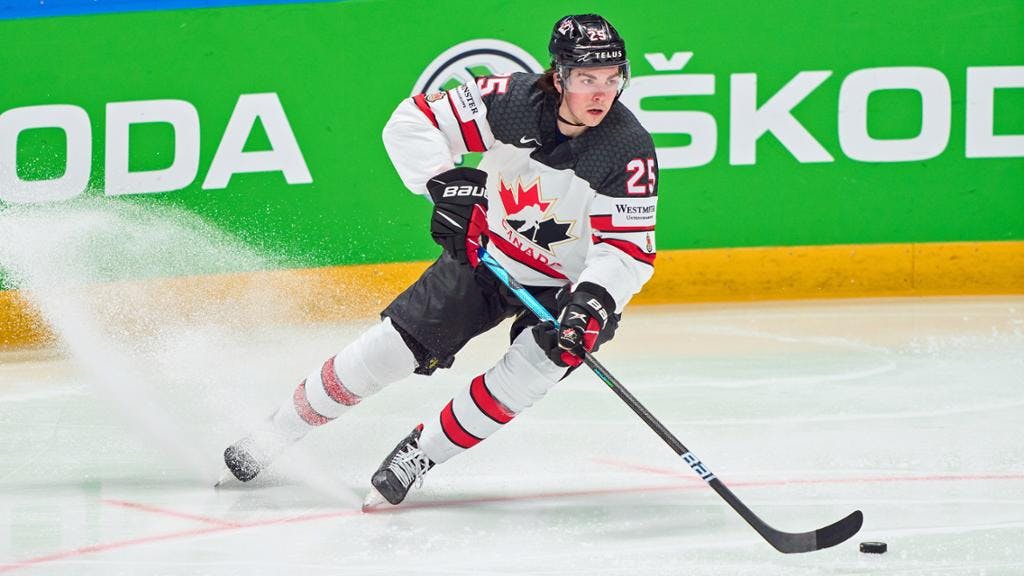 By Liam Horrobin
11 months ago
Team Canada came out of the gates flying in their lone pre-tournament game against Russia. In the preview for that game, one of the keys to victory was scoring early and putting the Russians on their heels. Well, that’s exactly what Canada did, scoring four goals in the opening 20 minutes against one of the best goaltenders in the tournament in Yaroslav Askarov (Nashville Predators, 11th overall, 2020).
Mason McTavish (Anaheim Ducks, 3rd overall, 2021) opened up the scoring on the powerplay for Canada. One big takeaway from this game was his and Kent Johnson’s chemistry (Columbus Blue Jackets, 4th overall, 2021). They also connected on Canada’s third goal but vice versa, with Johnson getting the siren this time. Ridly Greig (Ottawa Senators, 28th overall, 2020) and Lukas Cormier (Vegas Golden Knights, 68th overall, 2020) scored the other two goals for Canada, giving them a 4-0 lead after one.
Russia came out to play a little more in the second period putting three past the Canadian goaltenders. Matvey Michkov introduced himself to the World Juniors stage with a one-timer blast on the powerplay to put the Russians within two at that point. If you aren’t aware of Michkov, he’s essentially the Russian version of Canada’s Connor Bedard. A highly skilled forward who loves to score goals. He and Bedard will battle it out for the first overall pick in the 2023 NHL Draft. Nikita Chibrikov (Winnipeg Jets, 50th overall, 2021) and Alexander Pashin (Carolina Hurricanes, 199th overall, 2020) scored the other two goals for Russia. For Canada, McTavish was on the board again with a filthy goal. He showed great composure and confidence with the puck to drag it around Askarov for an easy tap in.
In the third period, Bedard entered the fold with a nice goal in front. His quick hands beat Askarov to put the Canadians back in front by three. Later on, Michkov countered Bedard with his second goal. As a hockey fan, we should all be hoping we see a Bedard vs Michkov matchup again at this year’s World Juniors.

Tonight, Canada begins their quest for lucky number 18 against Czechia in Edmonton. Czechia didn’t play a pre-tournament game after their contest against the Swiss was cancelled due to COVID-19.
Canada met the Czechs in last year’s tournament, eliminating them in the quarter-finals 3-0. Czechia hasn’t made it past the quarter-final stage since 2018 when they knocked out Finland in overtime but then lost to Canada 7-2 in the semi-finals. They then lost 9-3 to Team USA in the bronze medal game.
Jan Mysak is their captain and also one of 10 NHL draft picks. Mysak is a Montreal Canadiens pick from the 2020 class they selected 48th overall. He’s playing the OHL with the Hamilton Bulldogs, where he has 17 goals and 31 points in 25 games. He is also one of seven returnees.

Canada needs to do what it did against Russia. Come out hot and get the scoring started early. They scored in just under seven minutes on Thursday, then grabbed a second less than a minute later against a top goaltender in Askarov. There is no disrespect to the Czechia goaltenders, but it doesn’t matter who plays; they are not on the same level as Askarov.
It’ll be important tonight to have players like Dylan Guenther (Arizona Coyotes, 9th overall, 2021), Shane Wright and even Cole Perfetti (Winnipeg Jets, 9th overall, 2020) to get on the board. It was only one pre-tournament game, but it’ll be better for those guys to get involved early in the tournament instead. Yes, Wright and Perfetti had an assist in that game against Russia, but Canada needs more from those two.
Finally, don’t allow any softies. Canada shouldn’t have any issues against Czechia, but you don’t want your goaltenders to be allowing soft goals. It lowers confidence which could cause trouble down the road. Garand is expected to start tonight after allowing one on 15 shots on Thursday.

Canada walks away from this one with a comfortable 6-0 victory over Czechia. Mason McTavish and Kent Johnson continue from where they left off on Thursday, and Owen Power has a three-point tonight. My bold prediction is that Dylan Garand only faces 15 or fewer shots after 60 minutes.
How do you think tonight goes?
Gameday Previews
News
Recent articles from Liam Horrobin