Advertisement
Ad
Because It’s The Cap: Edmonton Oilers
By Cam Lewis
6 years ago
Comments
Embed from Getty Images
Over the next month, we at NHLnumbers are going to be taking a look at where each team in the league currently stands based on what we learned from them last season, and where they realistically can and should go this summer with the resources and cap space they have.
It’s pretty easy to look at the Edmonton Oilers’ 2015-16 season and say it was a complete disaster. I mean, you wouldn’t be wrong to view it that way, considering the fact they finished second last in the league standings and allowed their playoff drought to reach a decade in length. Their 31 wins are barely an improvement from all the way back in the 2009-10 season when they had 27, which is when they officially started tanking and their oil change began.
Advertisement
Ad
Advertisement
Ad
If you told Oilers fans after they drafted Taylor Hall first overall that summer that the team would be fooling around in the league’s basement with a 31-43-8 record six seasons later, they most certainly wouldn’t have believed you. If they did believe you, they probably wouldn’t have assumed the rebuild was a total dud, but instead, the season’s failure was the result of unfortunate circumstances. And that wouldn’t be entirely wrong.
I’m not going to make excuses for this organization — because let’s be honest, they’re nowhere near where they should be considering they’re six (official) years deep into a rebuild with four first overall picks in their cupboard — but a big reason why last year’s group did as poorly as it did ultimately comes down to injuries. Their top two centres, Connor McDavid and Ryan Nugent-Hopkins, each missed significant time with two different serious injuries, Oscar Klefbom, their best defenceman, missed more than half of the season, and solid depth players Beniot Pouliot and Brandon Davidson also each missed nearly 30 games.
Advertisement
Ad
Advertisement
Ad
Would they have been a playoff team with better injury luck? I really doubt it. But if McDavid, RNH, and Klefbom all play somewhere near a full season, the Oilers aren’t finishing with the second worst record in the league.
Embed from Getty Images

Despite the frustrating and difficult-to-watch season that transpired this year in Edmonton, there are quite a few things to like about this team.
Advertisement
Ad
Advertisement
Ad
Obviously Connor McDavid had a phenomenal rookie season, leading the team in points-per-game and corsi for percentage in the 45 games he suited up for. Taylor Hall was excellent and will most certainly continue to be as such, while Leon Draisaitl showed flashes of brilliance after a disappointing rookie season. Patrick Maroon and Zack Kassian, both mid-season acquisitions, provided some necessary strength up front. When they were healthy, Jordan Eberle and Beniot Pouliot were producing at a solid level, and Ryan Nugent-Hopkins, also when healthy, established himself pretty easily as the team’s the best two-way forward. They have a reasonable start to a good defensive group with Andrej Sekera, Oscar Klefbom, and Brandon Davison, plus a couple of interesting prospects in Darnell Nurse and Griffin Reinhart, who all thrive in more of a shut down, defensive zone role. Also, Cam Talbot had the first good season by an Oiler goalie in, geez, I don’t even know how long despite playing behind a pretty thin blue line.
Advertisement
Ad
Advertisement
Ad
It shouldn’t come as much of a surprise at all, but the biggest issue this team has moving forward is their blue line. Specifically, their defencemen provide virtually zero value offensively, making it difficult for their strong group of forwards to do the things they do best. I mean, Oscar Klefbom is the only Oilers defenceman who provided any kind of offence, and he only played 30 games, so it’s difficult to say whether that’s actually a part of his game, or if it was an abnormality. When looking at the NHL’s leaders among on-ice shot attempts for per hour, you have to do a lot of scrolling to get to any Oilers. And even then, when you look at with and without you numbers, it becomes pretty clear that the offence generated is the work of the team’s top forwards in that the defencemen’s possession numbers take a pretty big hit when they aren’t on the ice with them.
Advertisement
Ad
Advertisement
Ad
That also leads into the other issue with the Oilers roster, which is depth forwards. The common rhetoric surrounding this team is that players like Hall and RNH aren’t getting the job done, which really isn’t the case. When they’re on the ice, the Oilers are generally the better team, but unfortunately, their top-six forwards can’t play 60 minutes a night. Edmonton’s revolving door of bottom-six forwards, Lauri Korpikoski, Mark Letestu, Anton Lander, and so on were completely eaten alive on the ice in terms of possession, generating scoring chances, and, of course, scoring, largely because they were frequently hemmed in their own zone. I mean, beyond Hall, McDavid, Pouliot, RNH, Draisaitl, and Teddy Purcell, (and Patrick Maroon, who basically filled his role after the trade deadline) their bottom-six forwards only scored 44 goals combined, and a decent chunk of them came either on the power play or when playing in a top-six role due to Edmonton’s injury glut.
So what we have here is a team loaded with talent up front, but a problem with depth as their third and fourth lines generally gave them nothing on a night to night basis. The team needs a lot of work on the blue line, largely in puck moving and offence generating defencemen, and possibly another right-handed shot who can form a legitimate shut down pairing. Thankfully, the Oilers have a lot of assets at a position of strength at their disposal, so these holes can most certainly be filled.
Advertisement
Ad
Advertisement
Ad
Embed from Getty Images 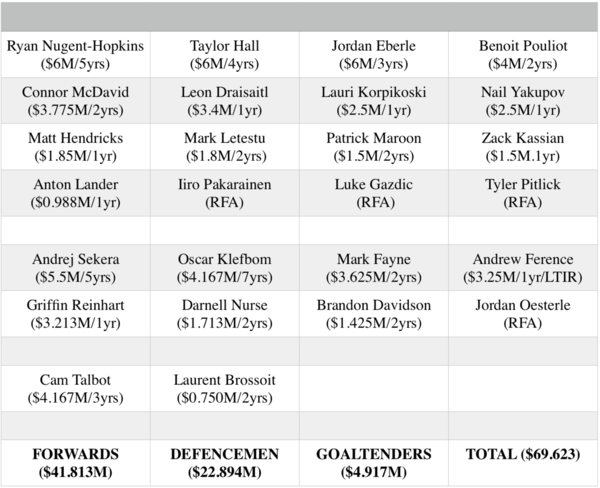 For an expanded chart with all players the organization has signed, visit nhlnnumbers.com
The Oilers already have a good chunk of their roster fleshed out right now, with 12 forwards, six defencemen, and two goalies from last year’s roster signed into next season with roughly $10 million in cap space to work with (a little bit more if Andrew Ference gets placed on the LTIR, but I doubt they’ll take the risk of spending to the upper limit with that in mind). So if they’re going to mix some things up, it’s definitely going to have to be through trade. This isn’t really a roster that you can make significant changes to via the free agent market, because for each major player they add, they’re going to also need to get rid of a contract to make it work financially and in terms of 23-man roster space.
Advertisement
Ad
Advertisement
Ad
Also, another thing Peter Chiarelli and Co. need to keep in their minds is Connor McDavid and the end of his entry-level contract and how that’s going to work well into the future. McDavid will need a new deal for the beginning of the 2018-19 season (obviously it’s going to be worked out before that), and as of right now, they already have $35.8 million invested in seven players heading into that season. And that’s not counting Leon Draisaitl, Brandon Davidson, Darnell Nurse, or anybody else who will need a new deal sorted out before then, too, of course.
So the theme with the Oilers is pretty obvious, really. You have Connor McDavid on your roster right now at a very, very cheap price. Not only do you need to capitalize on these bargain years while you can, you also need to be smart about it so that you don’t end up in a situation where it becomes difficult to fork over the money he’s going to command on his next contract. Of course, it would take some monumentally horrible cap management to allow that to happen, but let’s not forget what it was that got Chiarelli fired from his last job in Boston.
Advertisement
Ad
Advertisement
Ad
A question was brought up in the comments about how I got to that $10 million figure. Let me clarify.
I made my projection while considering the LTIR (Ference) and the bonus cushion pushing them to roughly $10 million in open cap space, depending on where the cap ceiling ends up, which hasn’t been announced yet. Performance bonuses count against the salary cap, but a team can exceed the salary cap due to performance bonuses by the maximum performance bonus cushion amount of 7.5% of the upper limit.They certainly won’t spend all of that ~$10 million, of course, but it’s more of a rough number to give an idea of how far they can go this summer (not very), which illustrates the point that changes will need to be made via trade.
Advertisement
Ad
Advertisement
Ad
Embed from Getty Images 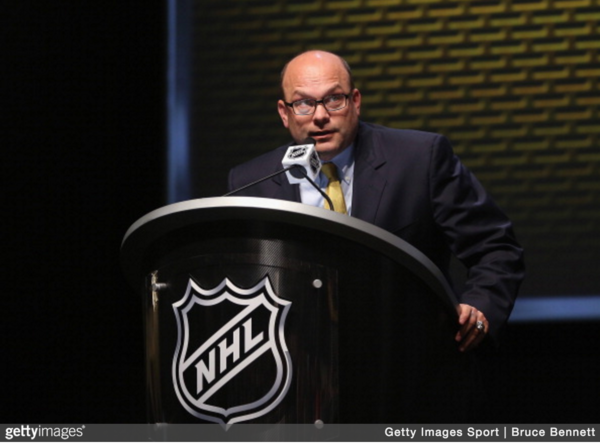 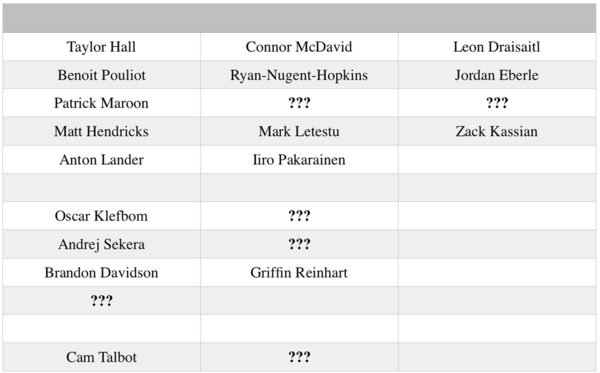 This is a really important offseason for the Oilers, and fortunately for them, it features all of the possible pieces they’re going to need in order to boost their team from mediocrity into relevance. That said, it’s also going to require them sucking it up and pulling the trigger on a difficult move, because not all of the solutions exist in free agency.
I alluded to this earlier, but it’s really, really important to take advantage of Connor McDavid’s cheap years, because not too long from now, he’s going to be commanding a massive salary. Obviously the Oilers will be happy to pay it, because it’ll mean that he’s established himself as one of the best players in the league if he’s commanding that kind of money, but they aren’t going to have an elite core of young forwards signed at a combined $25 million forever, so the time to capitalize on this group is right now.
Advertisement
Ad
Advertisement
Ad
They already have pretty much a full roster, leaving them with roughly $10 million to spend on upgrades, so some pieces are going to have to be moved around if they’re going to manage to fill all the holes they need to in order to become a competitive team.
Using the fourth overall pick to acquire a defenceman is all fine and dandy, but it’s going to leave them with not a hell of a lot of money to fill other holes. It’s also important to remember that the player selected fourth overall this June probably won’t help them this upcoming season, it never hurts to have good talent on entry-level contracts when your team is competitive. Obviously nobody wants to trade someone like Jordan Eberle or Ryan Nugent-Hopkins, because they’re damn good players, but that’s the reason another team will be willing to pay a premium for them in return. Also, moving one contract for another gives the team more flexibility in free agency to add depth to the team in the short-term, which is certainly necessary for this group right now.
Advertisement
Ad
Advertisement
Ad
There’s pros and cons to whichever route they take, of course, but however Peter Chiarelli and Co. decide to go about doing it, this is an offseason where the Oilers absolutely need to be aggressive and creative, because this group they have right now isn’t going to be young and cheap forever, and they’re actually a lot closer to being competitive than you might think at a glance.