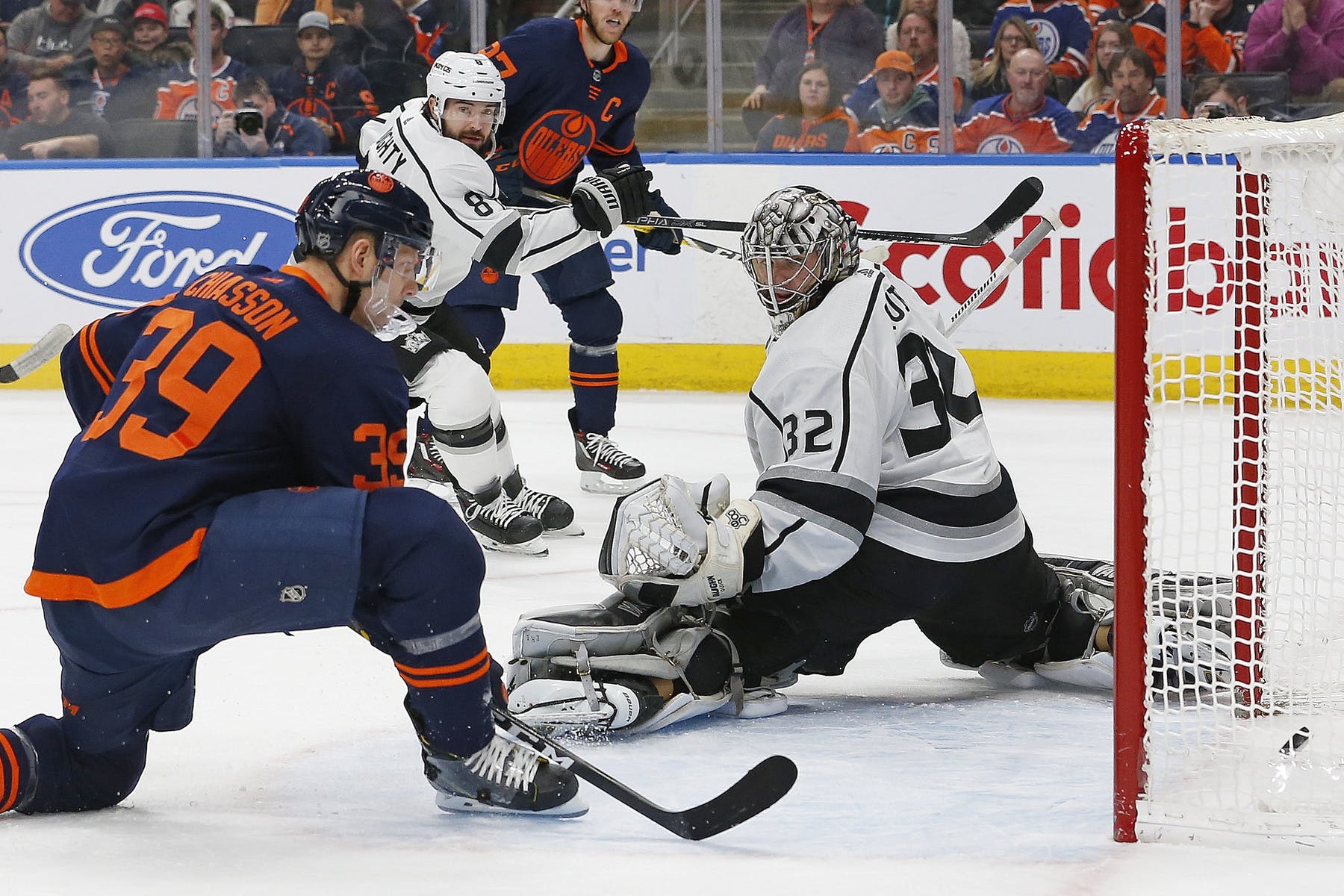 Photo credit: Perry Nelson-USA TODAY Sports
By Jason Gregor
2 years ago
Comments
The Edmonton Oilers scored 3.14 goals/game last season, which ranked 15th in the NHL, and they managed that despite being 29th in shots on goal/game with 29.6.
Their power play was a league best 29.5% and they led the NHL with 59 power play goals, which helped their overall offence significantly.
At 5×5 the Oilers offence was 18th, and they could be much better at 5×5 scoring once they commit to scoring gritty goals.
Watching the Oilers games last season, I felt they rarely had traffic in front of the net. They didn’t score many “garbage” goals. I never had numbers to back up what I saw, but in a recent conversation with Kevin Woodley from InGoal Magazine, he confirmed my suspicions. Edmonton did not score a lot of “gritty” goals.
These numbers include all situations in expected goals.
Edmonton was 31st in goals created off of a rebound.
They were 29th in deflection goals.
They were 19th in broken plays (description below).
They were 15th in goals due to screens.
Advertisement
Ad
Advertisement
Ad
Woodley explained an example of a goal off a broken play, “Where a pass is going across ice and it hits a skate and comes back, or a shot through traffic that gets tipped and deflected into a back door. They don’t hit the goalie, they don’t become rebounds, they become “broken plays.”
Woodley got these stats from Clear Sight Analytics. Founder of CSA, former NHL goalie Steven Valiquette said Benoit Allaire, once tracked these type of goals and found they accounted for 60% of playoff goals. So while you can win in the regular season without a lot of “gritty” goals, you often need them to succeed in the playoffs. After the playoffs we broke down every goal the Oilers scored, and how the Blackhawks scored, and Chicago had more of the “gritty” variety.
Advertisement
Ad
Advertisement
Ad
Woodley added more on the Oilers “gritty” offence.
“They (Oilers) created an expected 36 goals but only managed to convert 30 of them. So, they were bottom half of the league creating those chances and even worse when it came to shooting percentages and finishing off. It isn’t foolproof, but based on those things you mentioned you can ask: Are the Oilers getting to the areas or creating chances in those areas? And then in terms of finishing on broken plays, are you hard enough on the puck to win those battles and get those second opportunities off? And statistically they match the eye test in terms of what you’re seeing — they don’t.”
The Oilers weren’t good at producing “gritty” goals, but there were some areas where they were quite good. Woodley explains.
Advertisement
Ad
Advertisement
Ad
“We talk a lot about slot line plays, and one of the top ways to create offense is through slot line plays. Which means: move the puck across the ice below the top of the faceoff circles, make the goaltender move from one side to the other. And we’ve talked about how that is one of the things that has increased the most over the last five years in terms of offense in the NHL, the recognition that even on a two-on-one if I take a clean sighted shot coming into the faceoff circle my chances of scoring are significantly lower than if I complete that pass on the two-on-one and  my teammate gets a shot across.
“So, recognition of that has lead to a new increase in those types of chances and that’s the one where the Oilers really jump up. They’re seventh in the NHL in terms of expected goals off of slot line play and  they scored 34 goals scored that way. They are middle of the pack in terms of shots from the slot area, one timers, clear sighted shots, everything else is sort of middle of the pack and then they were lower in the gritty goal areas we discussed.”
Advertisement
Ad
Advertisement
Ad

Nov 19, 2019; San Jose, CA, USA; Edmonton Oilers left wing James Neal (18) scores a goal past San Jose Sharks goalie Martin Jones (31) during the second period at SAP Center in San Jose. Mandatory Credit: Cody Glenn-USA TODAY Sports
Another area the Oilers performed well in was net plays.
“The one area where you see an opportunity to create a little more are net plays, which include net play rebounds, net play chances and net play broken play. In other words, you are just attacking the net from dead angles, even from behind the goal line and below the net. The Oilers are solid there.
“They are eighth (net play chances), eighth (net play rebounds) and 10th (net play, broken plays) in those rankings respectively. And they rank third in slot line passes, which is one of the biggest offensive creators, the most significantly increased creators of offense over the last couple of seasons.”
So how can the Oilers increase their offence? Adding more skilled players to the lineup will help, and their opening day roster this year will have much more proven NHL skill than last year.
Advertisement
Ad
Advertisement
Ad
@Tyler Ennis, @Kyle Turris, @Dominik Kahun, @Kailer Yamamoto and @Jesse Puljujarvi have combined for 352 NHL goals. The five forwards they replaced — @Riley Sheahan, @Joakim Nygard, @Markus Granlund, and two of @Gaetan Haas, @Jujhar Khaira and @Alex Chiasson — have scored 245 goals. Automatically the Oilers have more proven skill up front, which should lead to more offence, and if the group can generate more traffic in front they should be able to score more goals off of rebounds, screens, deflections and broken plays.
The good news for the Oilers and their fans is scoring skilled goals, slot line passes for instance, require more skill, and it is difficult for an individual player to suddenly develop more high-end skill at the NHL level. Whereas gritty goals require a commitment to playing in the tougher areas. I believe you can improve your work ethic and grittiness easier than trying to improve high-end skill. Much of that is natural ability, and you either have it or you don’t.
Advertisement
Ad
Advertisement
Ad
Edmonton has more natural skill on their roster this year, and if that skill is willing to add more grit they should see an increase in scoring.

Feb 2, 2019; Philadelphia, PA, USA; Edmonton Oilers right wing Zack Kassian (44) scores past Philadelphia Flyers goaltender Carter Hart (79) during the third period at Wells Fargo Center. Mandatory Credit: Bill Streicher-USA TODAY Sports
Here is the Oilers overall goals per game production the past five seasons:
2016: 2.43 goals/game.
2017: 2.96
2018: 2.79
2019: 2.79
2020: 3.14
Over that five-year span they were 20th in 2.81 goals/game.
In the three most recent seasons combined they were 20th at 2.90 goals/game.
In the past two combined they were 19th at 2.95.
Last season they finished 15th at 3.14.
I felt it was important to show that even though they improved significantly last season up to 3.14/game, the league average also went up.
They were close to being top-10 in goals/game last year. The Pittsburgh Penguins were 10th at 3.20.
The New York Rangers were fifth at 3.33
Colorado was fourth at 3.37, Toronto was third at 3.39, Washington second at 3.42 and Tampa Bay was first at 3.47.
Advertisement
Ad
Advertisement
Ad
Edmonton took a big step last year in overall offensive production, granted much of it was due to the powerplay. This season the improvement needs to occur at 5×5, where most of the game is played.
Here is their 5×5 goal production the previous five seasons.
2016: 1.63 goals/game at 5×5.
2017: 2.02
2018: 1.98
2019: 1.78
2020: 2.02
In the past five years combined they were 18th at 1.88 goals/game.
In the previous three season they were 21st at 1.92 goals/game.
The past two seasons they were 24th at 1.89 goals/game.
Last year they finished 18th at 2.02 goals/game.
So at 5×5 they haven’t improved their standing in the league at all. They scored a bit more, but so did the entire league.
Tampa and Toronto were first in the NHL with 2.3 goals/game at 5×5 last season.
Washington was fifth at 2.27.
St. Louis was 10th at 2.14.
Advertisement
Ad
Advertisement
Ad
Edmonton scored eight fewer goals at 5×5 than St. Louis. So it’s not like they need a massive improvement, it averages out to one extra 5×5 goal every 10 games (in a full season).
That seems very plausible with the new additions to the team, however, it might come solely on increased skill, rather than in “gritty” goals. I’m not sure the new additions bring “gritty goal” characteristics.
It will be interesting to see how they rank in those categories at the end of the 2021 season.