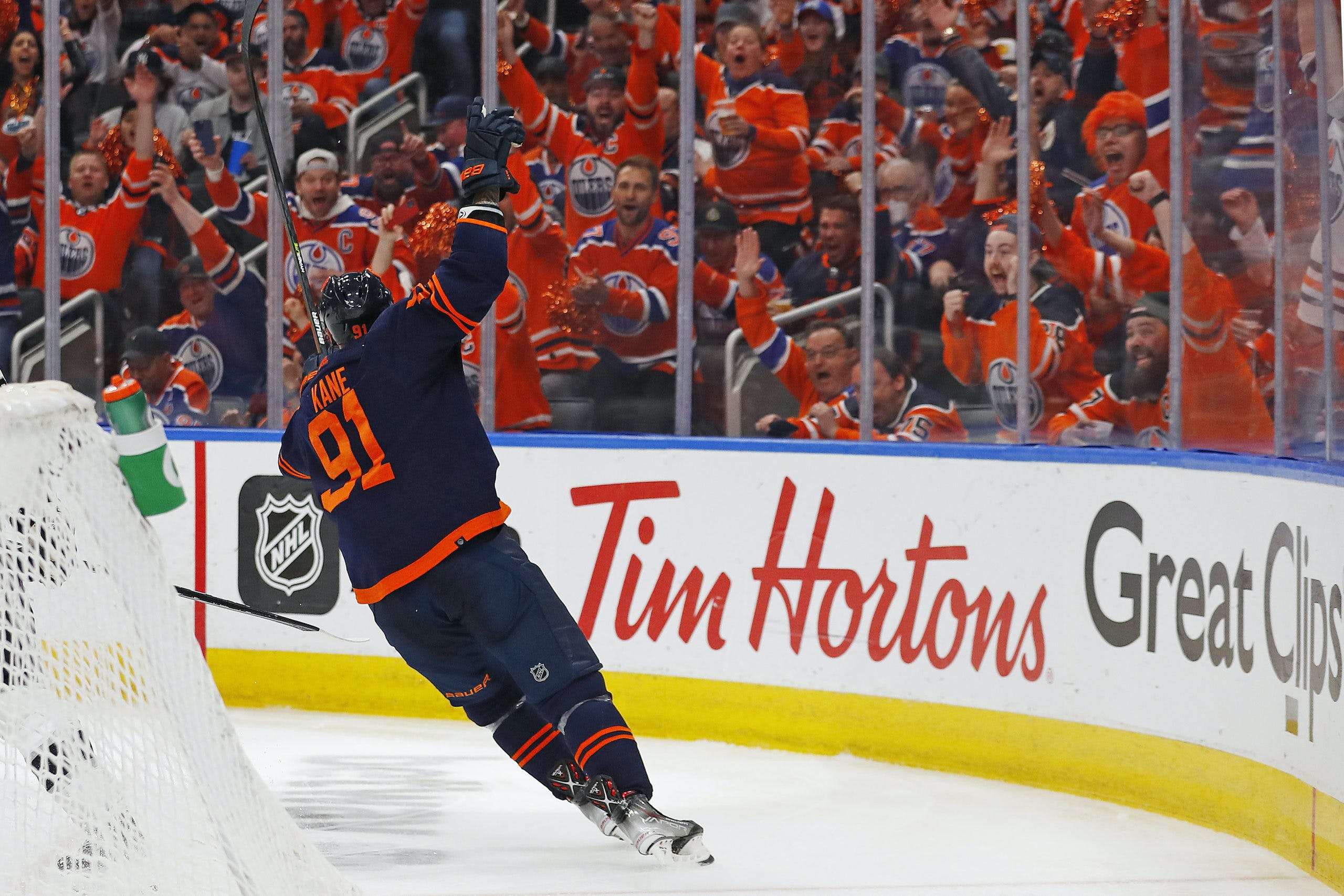 edmonton oilers fans singing the national anthem in the playoffs is undefeated 😤 pic.twitter.com/VvRsvWEzE1

connor mcdavid is off to the penalty box for boarding mikey anderson pic.twitter.com/8jxj0yWLIT

alex iafallo throws a backhand on net, but it goes off the top corner of the net and somehow bounces out. pic.twitter.com/1DxydbG4zy

andreas athanasiou runs into mike smith, who does a great job selling the call. oilers off to the powerplay. pic.twitter.com/O9qSRnGdX4

connor mcdavid lays a hit in the offensive zone and gets some mvp chants from oilers fans pic.twitter.com/UH7E4RrXDu

ryan mcleod with the beautiful tip and the oilers are up 3-0!!!!! pic.twitter.com/4We3o4Pnuz

leon draisaitl with the self pass is just too nasty 🤯 pic.twitter.com/0m9FycEm1t

On the game: “I think we were patient. We didn’t try to force anything. We kind of just waited for opportunities to open up. When they came, we made the most of them. It’s going to be important to play that same way, because that’s a good team we’re playing over there in LA that plays hard each and every night and doesn’t give up much. When those opportunities arise, we have to try to make the most of them.”
On the physical play: “Throughout their lineup, there’s a lot of juice too and guys were getting on the body. The crowd was really getting into it too. As a team, we fed off that. We want to play hard and that’s not just a few guys, that’s the whole team and that showed.”
Advertisement
Ad
Advertisement
Ad
Nurse on the Oilers’ ability to move on from game one: “I think we stayed calm, believed in our structure, believed in the way we can play. With that said, it’s one game. There’s a lot of hockey left to be played in the series. It’s a game we can build off of, look back and see some of the positives within our structure, within the way we played. We get to la, reset and get to the next one.”
On who had a better second-period hit: McDavid or Nugent-Hopkins: “It’s a tie, I’m never going to pick between my teammates.”
On the Oilers’ first playoff win in front of fans in five years: “This is an electric building around this time of year and as players, you feed off the energy they bring. For us, we want to be playing as long as possible to be enjoying this as long as possible. It’s a lot of fun to have the fans not only in the rink, but after games celebrating. It gives a lot of life to the group.”
Advertisement
Ad
Advertisement
Ad
On if there was more of a sense of calm in game two vs. game one: “Yeah, absolutely. Especially early in the game. We weren’t trying to force too much, we just tried to settle in and play and that’s going to be important that we go into LA, into an opposing team’s building where it isn’t going to be as friendly as it is here. It’s a different type of challenge and for us, we have to take some of those lessons from today of staying calm. We’ve been talking about staying even keel all season and this is another one of those steps.”
On the oilers’ identity, what this game says about it: “I think it’s something we’ve been working on. The big thing is just staying composed, staying in our structure not try to force things. Tonight was an example of that. In the first, like Evander said earlier. They had a good push coming out and we stayed even keel. We stuck to our game, stuck to our game and when opportunities arose, we were able to make the most of it. As an identity, as a group, we want to stay even keel. We want to be on our game and not waver away for a full 60. It was good tonight, but a lot more games to be played.”
Advertisement
Ad
Advertisement
Ad

On the key to 5×5 success tonight: “I thought we stuck with it early on here. They had a push early in that first period. We did a good job and a better job of getting pucks behind their d and creating chaos at their net. You look at a lot of our goals, we were great at special teams but we had a big tip by Clouder there to make it 3-0. That really gave us some momentum 5×5.”
On the Oilers’ special teams: “It seems that special teams in these first couple games throughout the league have been very important. The other night we won the special teams battle, lost the game. That doesn’t happen very often.. Tonight we did a great job again and that’s going to have to be continued throughout the rest of our journey here.”
Advertisement
Ad
Advertisement
Ad
Kane on McDavid, Draisaitl being physical and dragging the team into the fight of the game: “I think it’s so important, especially this time of year, that team toughness no matter who you are whether you’re Yamo’s size or nursey’s size. When you see Davo getting physical and working, it just shows the competitiveness he has and that battle level. That’s important in the playoffs and for both those guys to show that. They’ve done a great job so far.”
On Derek Ryan’s penalty kill play: “He’s a great player for us. He does a lot of really great things, has an offensive touch and does great work on the penalty kill. Our penalty kill has been really good these first few games and that’s going to have to continue.”
On the Oilers’ second powerplay unit, what’s worked: “We know Davo’s unit is going to get the majority of time and as a second group, we have to be ready to strike quick when we get ours. I think we’ve done a great job of that ever since I’ve gotten here anyways. Clouder and Yamo had a big goal last game and staying sharp and contributing. We’ve got 30 seconds to do our thing. So far, we’re doing a good job.”
Advertisement
Ad
Advertisement
Ad
On the bounce-back game from mike smith: “Schmiddy was obviously great tonight. He was really sharp for us early on, especially on those penalty kills. He did a great job. Personally, I didn’t expect anything less from him. He’s so mentally tough. A mistake was made, it happens all the time and had a great performance. We’ve got a lot of confidence in him as a group.”

On Smith’s performance: “It’s a fresh new game. We have all the confidence in the world in Schmiddy and he had a bounce-back game like no other. I expect nothing else. He’s a great competitor and was leading the troops tonight. It was fun to watch.”
On his return to Edmonton, if it has been everything he thought it could be: “Free agency is always stressful, but I came here to win. I think every guy in the locker room wants to do that. It’s a big win tonight. We’re gearing up for game three. That’s a pivotal game in SoCal. We’re going to live in the moment and enjoy this for a brief second, then prepare for game three because that’s what’s ahead of us.”
Advertisement
Ad
Advertisement
Ad
On the Oilers penalty kill: “To be honest, there’s been more penalties than expected at the beginning of the playoffs, but we all know special teams are huge come playoffs. You only get so many powerplays and we want our powerplay to be lethal. If they’re not scoring, they’re creating momentum for us right now which is good and the penalty is doing the same creating momentum by killing it off. In the last couple months, we’ve laid a good foundation in what we want our special teams looking like. That rolled into playoffs.”

Smith on his night: “To be honest, I didn’t feel too bad in game one. I made one mistake and it cost us the game. I think I carried the same kind of mindset into tonight and wanted to put in a good showing, especially after you feel like you’re maybe the cause of a loss. A bounceback is always important and tonight, the team played more up to the capabilities of how we’re able to play and we got rewarded.”
Advertisement
Ad
Advertisement
Ad
On the Oilers’ physical play from McDavid: “When your leader goes out and he’s banging bodies, I think it’s easy for everyone else to do it too. I think it’s playoff hockey. You want to get touches on guys as much as you can when they’re going back for pucks and it pays dividends in a long series. I think we did a good job of that tonight with the physicality. It started in the first period and carried throughout the game. We got a big win.”
On the fans, the vibes around the team: “It’s amazing. You feel the energy around the city. Everyone’s got oil jersey’s on and hats. You can’t help but get excited about coming to the rink and playing hockey with this loyal fan base we have here. Obviously, you see the people outside and it’s an exciting place to be an oiler right now. It’s a long series, there’s a lot of work left to do… It’s going to be some hard work going into LA.”
Advertisement
Ad
Advertisement
Ad
On Derek Ryan’s penalty kill play: “He’s a consummate pro. He puts in the work in practice, he’s a veteran player now that’s played on some teams that have done some good things. He means a lot to our kill tonight. We got into some trouble and he was there to make some great plays. He’s responsible in his own end and does a lot of good things for the whole 200 feet of the ice. He’s an important piece to the puzzle and he’ll continue to put in the work and get the job done.”
Advertisement
Ad
Advertisement
Ad
On the Keith-Bouchard pairing, Bouchard elevating his play: “I think everybody has. Playoff hockey is about upping your physicality and everybody has to get involved in that manner. Bouch is a guy who just has gotten better and better the last couple of months and has gotten comfortable with Duncs. When you play with a guy like that, Duncs is a very vocal leader. I think he’s helped Bouch out in a lot of areas. Bouch has grabbed it and taken advantage of the opportunity with ice time and the powerplay and how dangerous he is in the offensive zone. He’s just poised with the puck. He makes good plays and if he keeps it simple, he can make some unbelievable plays with the puck. He’s got a bomb of a shot, so he has all the tools to be a great defenceman in the league. You put those two together, and it’s a great pairing.”
On the fans lining up outside cheering during post-game interviews: “It is incredible. They’re like 30 deep out there, I think. I don’t know how long it goes on for. It’s pretty incredible when you have a fan base like this and they’re that excited about us having a chance to play for the Stanley Cup. We want to do anything possible to make that happen. It’s one game, we won one game, but it’s great to see the city feeling it. They deserve it because it’s been a long time coming. It’s a long road ahead, but you can’t do it without loyal fans.”
Advertisement
Ad
Advertisement
Ad