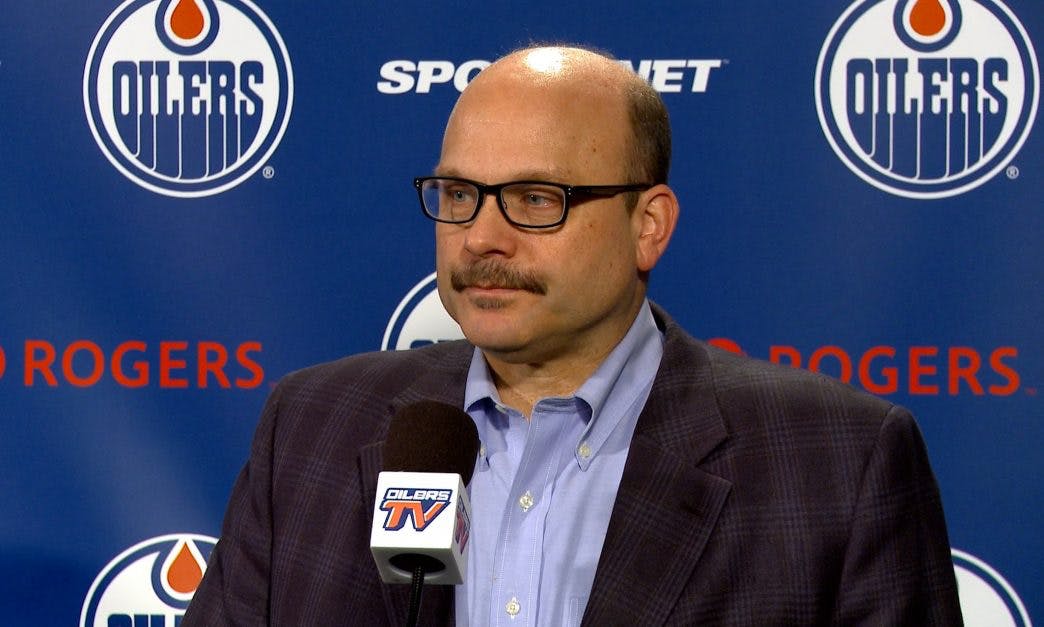 By Tyler Yaremchuk
3 years ago
Comments
We’re still well over a month away from the NHL Trade Deadline and the rumour mill in Edmonton is already buzzing thanks to some tweets from Bob Stauffer and Ryan Rishaug.

Oilers organization is on a full court press to find help at forward. Scouts and staff deployed en masse.

Cap situation could make it tough, but first round pick, a goaltender, maybe a young developing forward likely all in play.

If Stauffer or Rishaug tweet something, there’s usually a good amount of truth behind it. We all know that those two are very well connected.
Advertisement
Ad
Advertisement
Ad
So let’s assume that the Oilers are serious about getting some scoring help at some point over the next month. Where could they look and what should they be looking for?
I don’t think it matters if they acquire a left-winger or right-winger. They’re thin on either side and they have enough players that can play on both wings so I believe they should just go after the best possible player and not worry about what wing he plays best.
The price they’re willing to pay will also match the return they get. If they’re serious about dealing the first round pick, they better get a young player who isn’t a pending free agent. If they want to dangle a smaller asset, like a second or third round pick, then you should expect a smaller return. A rental could even be a possibility.
Advertisement
Ad
Advertisement
Ad
The other wrinkle in this is that if the Oilers want to acquire a good player, they’ll need to clear up the cap space to bring him in. Whatever team makes a deal with the Oilers will have to take back one of their more expensive contracts.
So which teams could be a fit?

Nov 11, 2017; New York, NY, USA; New York Rangers celebrate after scoring a goal against Edmonton Oilers during second period at Madison Square Garden. Mandatory Credit: Noah K. Murray-USA TODAY Sports
My process for this will be pretty simple, I will go through each team that I believe will be a “seller” at this year’s trade deadline and look at which players on their roster could interest the Oilers.
CAROLINA HURRICANES: There has been chatter about moving Michael Ferland, who is a pending UFA. He would need a new deal, and I wouldn’t even think about moving the first rounder for him, but I do believe he would be a really good fit with the Oilers. Seems like a Chiarelli type as well.
Advertisement
Ad
Advertisement
Ad
FLORIDA PANTHERS: We got a good look at the Panthers last night. I wonder if Frank Vatrano would be a good buy low candidate. His goals/60 at even strength would be fourth on the Oilers and his points/60 at ES would be 6th. He wouldn’t cost a lot of assets, he’s at 925k this year, and he’s an RFA at seasons end. Might provide a spark, but I wouldn’t call him a difference maker. Not sure if Florida has another name available that would interest the Oilers.
NEW YORK RANGERS: The Rangers are rebuilding and will be definite sellers over the next month and a half. Mats Zuccarello would be a rental and has a history of being a reliable goal scorer, but he only has four of them this season. Wouldn’t cost the first rounder and would be one of their better wingers.
Advertisement
Ad
Advertisement
Ad
Chris Kreider is a name that I would love to see in Edmonton. He has one more year at $4.625m, which is a really nice number from an Oilers perspective. He’s on pace for 40 goals, so a package to get him would probably start with the 2019 first round pick and have to include a good prospect.
I’ve always like Pavel Buchnevich as well, but I view him as more of a lottery ticket. A young winger with some skill though.
DETROIT RED WINGS: Gustav Nyquist would be the high-end target out of Detroit. He’s scored 20 goals three times during his career and he’s on pace to get close to that again this year. He might not cost a first rounder, but I also wouldn’t be surprised if a contending team coughed that up. He’s a UFA after this season and comes with a $4.75m cap hit. He might be too rich for the Oilers blood, especially since he’s a pending free agent.
Advertisement
Ad
Advertisement
Ad
Detroit has guys like Andreas Athanasiou and Anthony Mantha who I’m sure the Oilers would love, but I highly doubt Detroit considers moving them for picks.
PHILADELPHIA FLYERS: The only name on Philly that would be a fit for the Oilers is Wayne Simmonds. He’s a big, strong forward who can play at even-strength and help a team on their powerplay. He’s a pending UFA and will no doubt be one of the most sought after rentals on the market if Philly moves him. Teams like Toronto would probably pay a lot for him, so I can’t see the Oilers being a realistic fit. Apart from Simmonds, I don’t see anyone on the Flyers roster that’s a realistic fit for the Oilers.
OTTAWA SENATORS: Mark Stone is exactly what the Oilers need. He’s big, he can score, he can skate, and his best years are still ahead of him. Every team in the NHL would love a guy like that and if he makes it to market, the list of suitors will be long. He’s also a pending UFA so I doubt the Oilers would move significant assets without being able to sign him. And even if it got that far, they likely couldn’t afford him.
Advertisement
Ad
Advertisement
Ad
Apart from Stone, I would be looking at two lower tier players on the Sens. Ryan Dzingel is just 26 years old and he has 17 goals already this season. He’s pretty much locked up a second straight 20 goal season. He’s a pending UFA, so I could see Ottawa moving him and I don’t think his next deal would be out of the Oilers price range. He isn’t worth a first rounder, but maybe a second round pick with a condition on him signing a new deal?
Apart from the teams I just mentioned, there are players I like on teams like Tampa Bay, Washington, and the New York Islanders but those are all deals that would have to be done in the offseason. Teams won’t give up young talent during a playoff race.
Advertisement
Ad
Advertisement
Ad

Nov 25, 2018; Los Angeles, CA, USA; Edmonton Oilers right wing Alex Chiasson (39) celebrates after scoring a goal during the first period against the Los Angeles Kings at Staples Center. Mandatory Credit: Kelvin Kuo-USA TODAY Sports
There are only four teams in the West who are already in “sell” mode and I’m not even going to mention the Chicago Blackhawks simply because I don’t see them as a fit. I don’t think they’ll move any of their young wingers. There are some decent fits on the other three teams.
ARIZONA COYOTES: Richard Panik only has seven goals this season but he’s had success at times in his career playing with skilled players, mainly in Chicago. He’s a pending UFA, so if the Oilers are looking at the rental market, he should be a name of interest.
If they’re looking for a young player who’s under team control, what about Lawson Crouse? I’m not the biggest fan of him but he’s a big body and he has 12 goals in his first 125 career NHL games. He has skill but speed might be an issue with him. Not sure if he’s a perfect fit, but it’s a name to consider and someone I could see Chiarelli being interested in.
Advertisement
Ad
Advertisement
Ad
ST. LOUIS BLUES: Of course, I would love to see Vladimir Tarasenko in an Oilers jersey but I don’t think it’s realistic when you consider his $7.5m cap hit and the acquisition cost. I like Robby Fabbri, but I don’t think the Blues are going to move any of their young wingers unless you overpay. Alex Steen might be nice right now because he knows how to score goals, but he has a huge cap hit and he’s on the downside of his career. Not a fit either.
I’ve been asked about Brayden Schenn too. He has one more year at $5.125m and he’s currently having a bit of a down year. After three straight seasons of 20+ goals, he isn’t on pace for that this season. St. Louis is apparently considering moving him and although it would cost a lot, he’s a guy who could help the Oilers scoring depth. Although he shoots left, he can play centre and wing. I like that versatility.
Advertisement
Ad
Advertisement
Ad
LA KINGS: Tyler Toffoli really intrigues me from an Oilers perspective. He’s scored at a 20 goals pace in each of the last four seasons and I believe his best years are still ahead of him. I’m not sure if he’s worth a first-round pick, but that’s what it would take to get him from a division rival.
They have lower tier players like Kyle Clifford or Carl Hagelin, but I don’t think either of those players would be difference makers in the Oilers lineup.
After looking through all these teams, I really don’t feel like there is a winger available who is worth the Oilers first round pick. There are lots of names who I would consider moving a second or third rounder for or even both, but I’m not sure if any teams will be a making a skilled winger, who’s under team control, available mid-season. The time to get those guys is at the Draft when the value of a pick is at it’s highest. Unfortunately for Peter Chiarelli, he can’t really wait until the Draft to fix this team.
Advertisement
Ad
Advertisement
Ad
What say you Oilers fans? Was there a name I missed? Let me know!