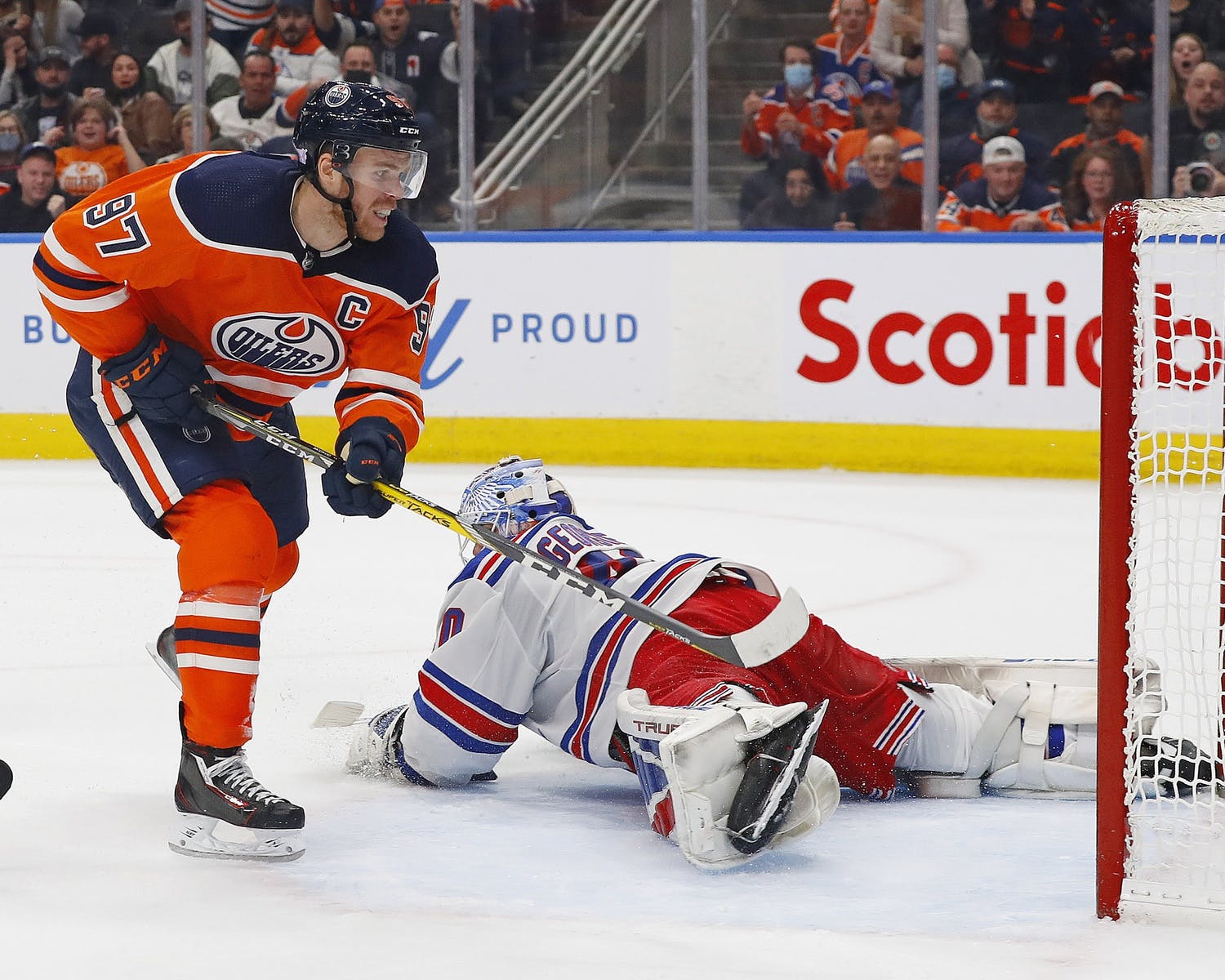 Photo credit: Perry Nelson-USA TODAY Sports
By baggedmilk
2 months ago
Comments
Be sure to check out the latest Oilers game day odds from NHL betting site Betway
Advertisement
Ad
Advertisement
Ad
At the quarter mark and sitting outside of the playoffs, it goes without saying that the Oilers are nowhere near where we expected them to be at this stage of the season. Instead of looking like a team with Stanley Cup aspirations, we’re watching a group that’s struggling to execute the basics at both ends of the rink, and it’s leading to frustration on the ice and for everybody watching at home. In their last 10 games, the Oilers have given up 40 goals while scoring only 25 and it doesn’t take a degree in advanced mathematics to figure out why they’ve gone 3-7-0 over that stretch. And while I don’t think the offensive issues we’re facing right now are going to last forever, I am absolutely concerned about the Oilers’ ability to keep the puck out of their own net because the defensive execution hasn’t been anywhere near where it needs to be all season. At this stage, we need a real gut check from every single player in an Oilers uniform because they’re pissing away games left and right and finding themselves falling behind the rest of the pack in the Pacific Division. We all know the stats about American Thanksgiving and being in a playoff spot, so it’s not exactly unfair to say that the pressure is on. The boys have got plenty of time until they don’t, ya know?
Advertisement
Ad
Advertisement
Ad
If the Oilers are going to avoid getting swept on this New York area road trip, the most important thing they can do is be ready to go from the opening draw and avoid giving the Rangers 10+ free minutes to do as they please while the boys get their legs going. On Wednesday night against the Islanders, it took Edmonton half a period before they were able to register their first shot on net, which is stunning given that they ended the night with 49 pucks on Sorokin, but the point here is that they have to fix this slow start issue and it needs to happen now. Despite losing to Arizona in their last game out, the Rangers are simply too good to be giving anything less than a 60-minute effort, and to take it a step even further, they’re also too good to expect a win on our side if we have only four players that are a reasonable threat to score. When you’re giving up 3.60 goals per game, the options are to either tighten up defensively and get back to basics, or hope your team can put up a touchdown every night. Seems to me the greater likelihood of success would be taking care of their own yard first, and knowing that the goals will come from playing sound defensively. Can that happen against the Rangers? New York just wrapped up a road trip that was punctuated by a loss to the Anaheim Ducks so it’s not like limiting their chances cannot be done. Will it happen, though? First step: be ready to go.
Let’s see what the numbers say.

Foegele – McDavid – Hyman
RNH – Draisaitl – Puljujarvi
Janmark – McLeod – Kostin
Holloway – Malone – Ryan
Advertisement
Ad
Advertisement
Ad
Nurse – Ceci
Kulak – Bouchard
Broberg – Barrie
Skinner
At this point in this stretch of sadness, I don’t care who scores a goal for the Oilers as long as it’s not in our own net (sorry, Evan). Over their last 10 games, the Oilers have averaged only 1.5 goals per game and that’s not going to get the job done when you’re giving up as many as they are. Maybe I need to head out to the streets and find a sacrifice of some kind to end this horrible snakebite because there are a lot of our boys that are gripping their sticks right now, and it’s starting to bum us all out. But if they play as they did against the Golden Knights last Saturday, they’re going to be fine and coming up with another effort just like it should be the goal. Step by step, brick by brick.
Advertisement
Ad
Advertisement
Ad

Kreider – Zibanejad – Vesey
Panarin – Trochek – Goodrow
Lafreniere – Chytil – Kakko
Blais – Carpenter – Gauthier
Lindgren – Fox
Miller – Trouba
Jones – Schneider
Shesterkin
Given that the Rangers lost to the Anaheim Ducks in their last game out, we should absolutely expect them to come out with chips on their shoulders. We should expect them to have their legs moving from the get-go and we should expect them to play with urgency. Nobody wants to lose to the worst team in the NHL, and that’s why the Oilers need to be ready to weather the rage-inspired storm that will surely be coming their way. For the second time in this GDB, I’m telling the Oilers to be ready to go.

The Blueshirts need to eradicate — or at least limit — these lopsided periods from their repertoire. It’ll count them out of too many games or run the team ragged as they try to compensate.
Their trouble finishing followed them from city to city. So many posts were hit. So many shots went just wide. So many bounces just did not go in their favor. Masking their frustrations with their poor puck luck went better some nights more than others, but when their irritation came through, it only made that black rubber disc stingier.
Losing to the Ducks, who are in the basement of the entire NHL, cast a bit of a shadow over the positives the Rangers should be taking away from the trip. Anaheim hadn’t won a single game in regulation until the Rangers came to town.
Read the expert take on the Blueshirts
Sign up for Larry Brooks’ Inside the Rangers, a weekly Sports+ exclusive.
Enter your email address
By clicking above you agree to the Terms of Use and Privacy Policy.
“We had four or five empty nets that [Ducks goalie John Gibson] made some type of save on,” said Mika Zibanejad, who posted a goal and three assists in the four games. “[Forty-three] shots. I don’t know, it’s frustrating. Yeah we don’t play our best game, but we create enough chances, we do enough, but the puck doesn’t want to go in. At least [Wednesday night]. Gibson comes up with some really big saves for them. It’s frustrating.”
The Rangers started to get some five-on-five scoring from their top six, especially in the 5-3 win in Los Angeles on Tuesday. Barclay Goodrow, Vincent Trocheck, Kaapo Kakko and Chris Kreider all broke through. It may not be nearly enough, but it’s a place to start.