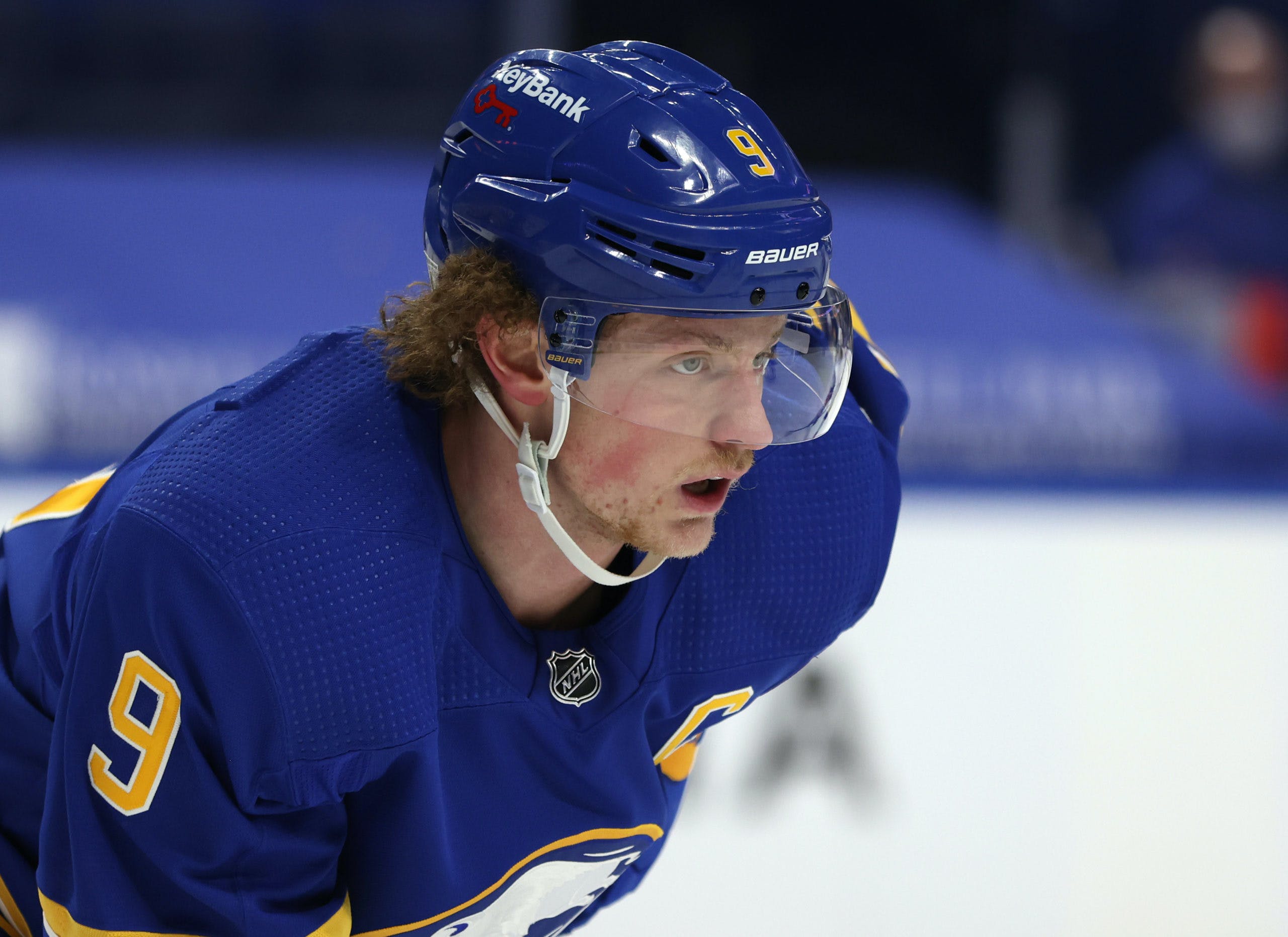 Photo credit: Timothy T. Ludwig-USA TODAY Sports
By Jason Gregor
3 years ago
Comments
The similarities are many.
The fan bases are blue collar, incredibly loyal, and they’ve watched more losing than every other NHL city over the past decade.
The Oilers and Sabres meet tonight in Buffalo, and once again both teams are on the outside of the playoff picture and need a miracle final 17-game run to make the playoffs.
1. Including this season, over the past decade the Oilers and Sabres’ on-ice struggles are almost identical. Excluding Vegas (only their second year in the NHL), the Sabres and Oilers are 29th and 30th in points gained over the the past 687 games. The Oilers have 271 wins and 624 points, while Buffalo has 270 wins and 628 points. The next closest is Arizona with 689 points. Edmonton and Buffalo have the NHL market cornered on being unable to win consistently.
Advertisement
Ad
Advertisement
Ad
2. Both teams have made the post-season once in the past decade. The Oilers in 2017, when they won a playoff round, and the Sabres in 2011. Buffalo is poised to miss the postseason for the ninth consecutive season, one shy of the NHL record owned by the Oilers and Florida Panthers.
3. The Sabres have had five head coaches in the past decade. Lindy Ruff coached the Sabres for 15 seasons, including the two and a half seasons of this losing decade, before he was mercifully replaced. Ron Rolston then coached 51 games split over two seasons. Ted Nolan returned for two 144 games between 2013-2015. Dan Byslma had the next two seasons, while Phil Housley is finishing up his second campaign on the bench. Edmonton has had six coaches over the same span. Tom Renney had the first two seasons, Ralph Krueger had the 48-game shortened 2013 season, Dallas Eakins had 113 games, Todd Nelson had the final 46 games of 2015, then Todd McClellan had the next three and a one-third seasons, and Ken Hitchcock will be on the bench for his 46th game of the season tonight. Eleven coaches and none have been able to overcome the overall lack of talent on the teams.
Advertisement
Ad
Advertisement
Ad
4. Since 2013 the Oilers and Sabres have drafted in similar spots. The Oilers took Darnell Nurse seventh in 2013, the Sabres grabbed Rasmus Ristolainen next at eighth overall. In 2014, the Sabres chose first, taking Sam Reinhart second overall and the Oilers followed with Leon Draisaitl third. Edmonton took Connor McDavid first in 2015, and Jack Eichel went second to the Sabres. Both picks from 2016 have yet to be the player both teams hoped as Jesse Puljujarvi (fourth) and Alexander Nylander (eighth) are still trying developing and adapt to the North American style. After losing the McDavid lottery, the Sabres did win the 2018 draft lottery and got phenom defender Rasmus Dahlin. They are hoping his second NHL season will end their long playoff drought just like the Oilers did in McDavid’s second year in 2017.
Advertisement
Ad
Advertisement
Ad
5. Ristolainen is in his sixth pro season, fifth in the NHL after splitting his first season between the AHL and NHL, while Nurse is in his fourth season. Ristolainen is on the verge of his fourth 40-point season, while Nurse is on pace for his first. For the past few years many wondered if the Oilers should have taken Ristolainen, and I wonder if they feel the gap is as large now as they thought a few years ago.
6. Ristolainen has 3-17-20 in 1,193 5×5 minutes this year and has been outscored 43-58 (-15). Nurse has 5-15-20 in 1,227 5×5 minutes and has been outscored 45-56 (-11). Their stats are very similar. Nurse has nine PP points in 128 minutes, while Ristolainen has 13 in 210 minutes. Overall Ristolainen has 38 points to Nurse’s 32. Ristolainen has a $5.4million cap hit for three more seasons, while Nurse has one more season at $3.2 million. Ristolainen had more success early, but Nurse has closed the gap. It will be interesting to see how the next six seasons unfold as both still have room to improve.
Advertisement
Ad
Advertisement
Ad
7. The Sabres are 20th in the NHL with 68 points and the Oilers are 24th with 63. Buffalo is 23rd in GF with 183 and Edmonton is 25th with 180. The Sabres are 21st in GA at 205 while the Oilers are 24th at 211. The Oilers’ PP is 12th at 21.7% and their PK is 29th at 75.4%. The Sabres’ PP sits 17th at 18.9%, while their PK is fifth best at 82.3%.
8. McDavid now has 90 points for the third consecutive season. In the 2000s only three other players have reached 90+ points three years in a row. Joe Thornton did it in 2006-2008, Steven Stamkos in 2010-2012  and Alex Ovechkin did it five years in a row from 2006-2010. Scoring 90 points consecutively is very difficult, and McDavid is ten points away from reaching a very exclusive club.
Advertisement
Ad
Advertisement
Ad
9. If he tallies 100 points he will become only the 19th player in NHL history to score 100 points in three consecutive seasons, and only the sixth player to do it since 1990. Here is the list.
Three consecutive 100 point seasons:
Alex Ovechkin: Washington (2008-2010)
Jeremy Roenick: Chicago (1992-1994)
Paul Coffey: Edmonton (1984-1986)
Bernie Federko: St.Louis (1984-1986)
Mike Rogers: Hartford (2), New York Rangers (1) (1980-1982)
Four consecutive 100-point seasons:
Brett Hull: St.Louis (1990-1993)
Five consecutive 100-point seasons:
Dale Hawerchuk: Winnipeg (1984-1988)
Jari Kurri: Edmonton (1983-1987)
Bryan Trottier: New York Islanders (1978-1982)
Marcel Dionne: Los Angelse (1979-1983)
Phil Esposito: Boston (1971-1975)
Bobby Orr: Boston (1971-1975)
Six consecutive 100-point seasons:
Steve Yzerman: Detroit (1990-1993)
Mario Lemieux: Pittsburgh (1984-1989)
Peter Stastny: Quebec (1981-1986)
Mike Bossy: New York Islanders (1981-1986)
Guy Lafleur: Montreal (1975-1980)
13 consecutive 100-point seasons:
Wayne Gretzky: Edmonton (9), Los Angeles (4) (1980-1992)
10. McDavid could join Alex Ovechkin as the only players since 1994 to score 100 points three years in a row. It will be a remarkable achievement. Not only does a player need elite skill to do it, they also need to remain healthy. Elite level consistency should never be taken for granted.
Advertisement
Ad
Advertisement
Ad

From peewee to the pros, Albertans loves the atmosphere, energy, and life lessons that take place at rinks across the province. And where there’s an arena, you’ll find an ATB branch nearby—with our team members cheering and fundraising along with you. See more information at ATB.com.
Source: NHL, Official Game Page, 3/4/2019 – 9:00 am MT