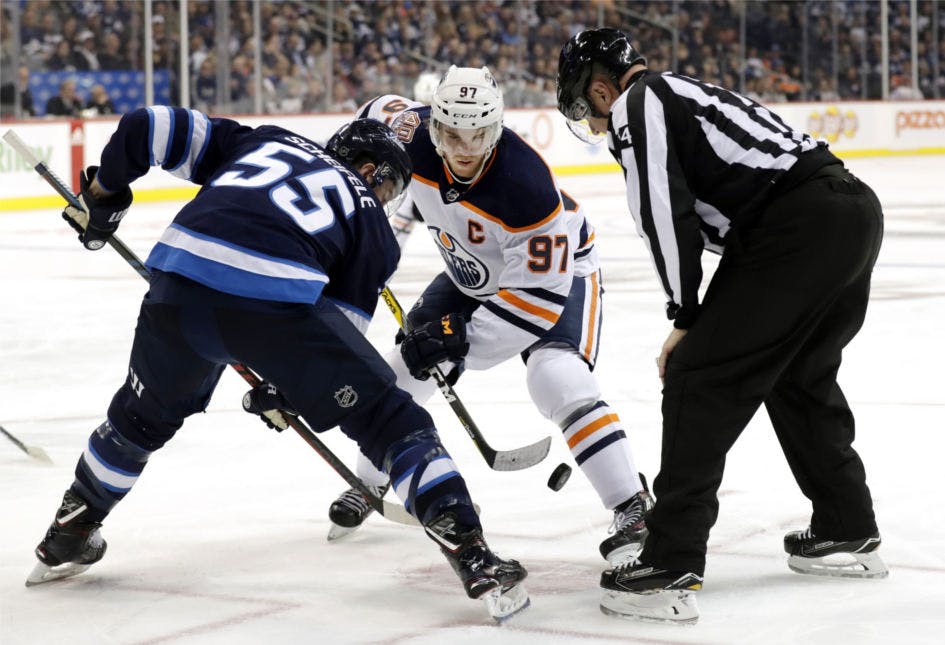 Photo credit: James Carey Lauder-USA TODAY Sports
By Jason Gregor
1 year ago
Comments
After playing each other nine times in the past four months, the Edmonton Oilers and Winnipeg Jets aren’t expecting any major surprises from the opposition.
“They might make some small adjustments after the success we had against them, but I don’t think you will see major changes,” said Oilers blueliner Tyson Barrie.
So what might those small adjustments be?
Winnipeg didn’t have an answer for @Connor McDavid in the regular season. He torched them with 22 points in nine games. The Jets forwards didn’t have much success.
McDavid outscored @Mark Scheifele 11-3 at 5×5 in 84 minutes.
In 62 minutes @Blake Wheeler was crushed 11-1.
Mason Appleton saw McDavid the third most often at 50 minutes and he had the best success breaking even at 2-2.
Andrew Copp was outscored 5-1 in 45 minutes.
@Kyle Connor (44 min) Paul Stastny (36 min) were outscored 4-0.
In 31 minutes Adam Lowry was outscored 4-1.
Schiefele, Stastny and Lowry will be the top-three centres tonight. They will try to limit McDavid’s speed in the neutral zone. Unless Paul Maurice goes full Steve Kasper or Esa Tikkanen and puts a shadow on McDavid, it will be up to all five Jets skaters to play incredibly disciplined to limit McDavid.
Advertisement
Ad
Advertisement
Ad
The Jets blueliners had the same challenges.
Josh Morrissey was outscored 9-2 in 77 minutes.
Neil Pionk was 6-1 in 69 minutes.
Derek Forbort was outscored 7-1 in 69 minutes.
Dylan Demelo was outgunned 5-0 in 22 minutes.
They are the top-two pairs tonight. Winnipeg doesn’t have a legit #1 defenceman to match up against McDavid.
Paul Maurice talked about limiting his speed through the neutral zone, and the need for the Jets to possess the puck in the offensive zone. In years past that would have been much easier, as the Oilers weren’t as sound defensively, but this season they haven’t got hemmed in their zone for long periods. It is harder to defend McDavid, because the Oilers aren’t spending as much time in their own end when he’s on the ice.
I asked Leon Draisaitl what has led to their overall improved play defensively. Since February 1st the Oilers have allowed only 2.47 goals/game, the fifth lowest total in the entire league.
Advertisement
Ad
Advertisement
Ad
“I think we are staying in our own zone longer,” said Draisaitl. “And if there is a breakdown or turnover we are able to support better and that has shown in our lower goals against.”
Possessing the league’s two leading scorers, and suddenly becoming stout defensively makes you a tough team to beat and the Oilers are hoping those trends continue tonight.

I get all the angst over Jones being scratched but we shouldn't be surprised.

Since February 1st the Oilers have the fifth lowest goals against/game at 2.47.

Connor – Schiefele – Wheeler
Copp – Stastny – Vesalainen
Perreault – Lowry – Appleton
Toninato – Thompson – Lewis
Morrisey – Demelo
Forbort –  Pionk
Stanley –  Poolman
Hellebuyck
Nik Ehlers and Pierre-Luc Dubois skated in non-contact jerseys this morning and seem unlikely to play. They stayed out late after the morning skate which is often a sign they won’t play tonight. Those are two huge holes in the Jets lineup and Edmonton has to take advantage of a banged-up opponent.

While you wait impatiently for the puck to drop take a moment and watch this. The energy in that building in 2006 was amazing. When the crowd started to sing the anthem, with Joey Moss leading the charge, it was electric.
Advertisement
Ad
Advertisement
Ad
How awesome was that?

It’s no secret, goaltender Connor Hellebuyck was left out to dry numerous times against Edmonton during the regular season and failed to slow down their explosive offense, resulting in his miserable 3.96 goals-against average and .877 save percentage over seven games. Though Winnipeg is hopeful its defenders can take a positive step forward in the playoffs, it seems the onus will likely be on the 2019-20 Vezina Trophy winner to dominate in the blue paint and carry his team beyond the opening round.
While that may seem like a difficult task, especially since Connor McDavid and Leon Draisaitl will probably be paired together at some point during the series, Hellebuyck has proven he can carry his dominance over to the postseason and will likely need to do so once again to advance to the second round. If the 28-year-old, who’s posted a 2.53 goals-against average and a .917 save percentage through 27 career postseason games, takes over this showdown against the Oilers, the Jets might be able to pull off this upset.