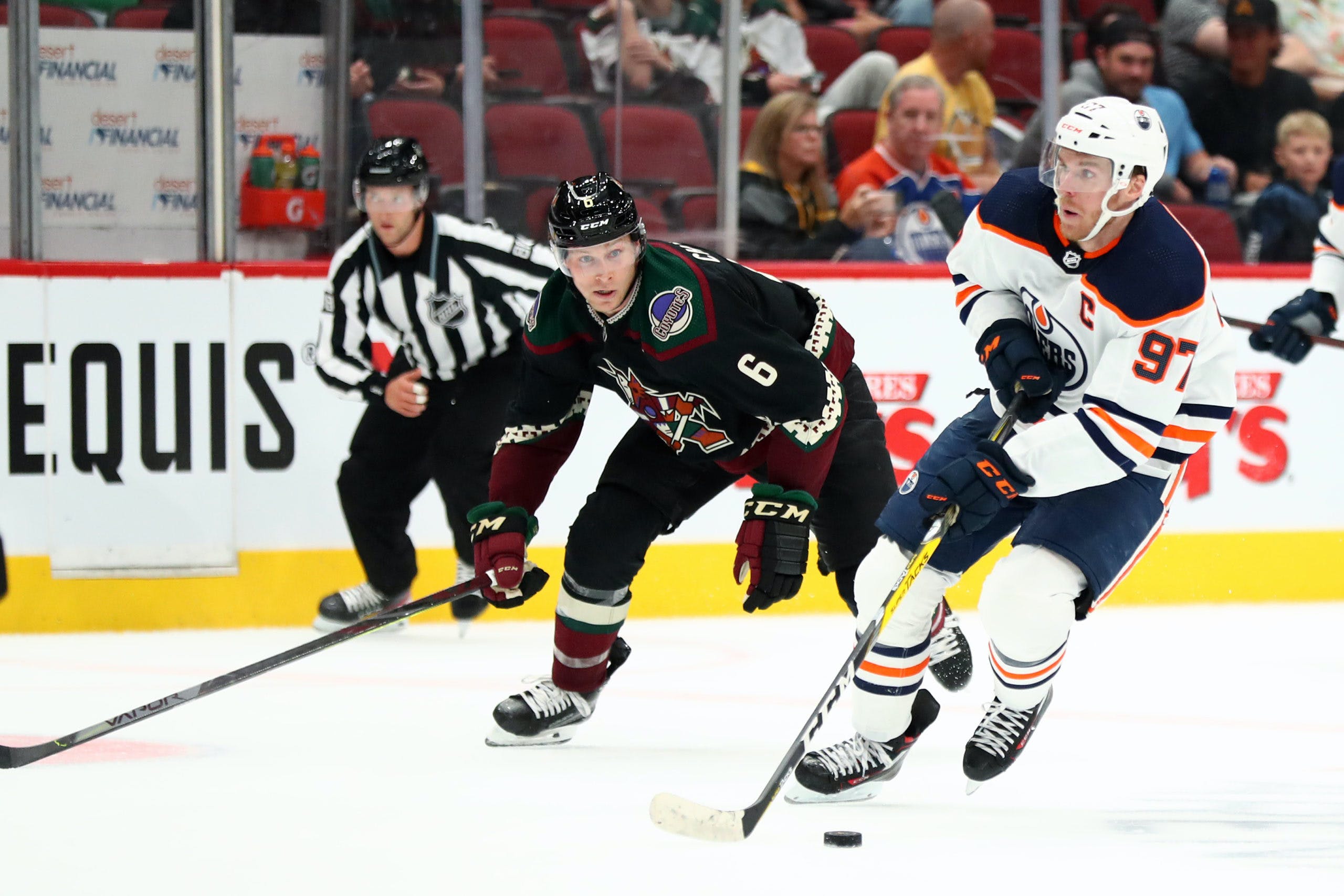 Photo credit: Mark J. Rebilas-USA TODAY Sports
By Jason Gregor
1 year ago
Comments
Injuries are incredibly unpredictable. You don’t know when they will occur, but when they do, an organization hopes the injury bug doesn’t bite too many key players or too many at one position.
The Edmonton Oilers have had significant injuries this season, and Duncan Keith joined the walking wounded last night. He is the third left-shot defenceman to be injured in the last three games.
The Oilers starting goalie, Mike Smith has played three games.
Their top defender, Darnell Nurse, has missed two games and will miss at least three more.
Duncan Keith, who was averaging the second most 5×5 minutes among blueliners before his injury, is out tonight. He is day-to-day according to Dave Tippett.
Josh Archibald has missed all 18 games as he battles myocarditis (swollen heart).
Zack Kassian missed four games.
Derek Ryan missed two.
Devin Shore has already been out for 10 games and will be out another few weeks.
Kris Russell battled a nagging neck injury and was in and out of the lineup.
Slater Koekkoek has sat out two games with an ankle injury and is out at least another two weeks.
Dylan Holloway has yet to play due to a wrist injury. He is scheduled to return in mid-January but will start in the AHL.
Advertisement
Ad
Advertisement
Ad
Goaltending, defence, and bottom-six forwards have been impacted with injuries. The fact Nurse, Keith, and Koekkoek are all out at the same time means Philip Broberg and William Lagesson are going to be called upon to play more than anyone expected. That’s life in the NHL. You never know when injuries will hit, but they usually do every season and, especially when it happens on defence, you need your organizational depth to step up.
Here is how the Oilers blueline has been impacted by injuries the past five seasons.
2017:
Oscar Klefbom was the only blueliner to play all 82 games.
Andrej Sekera missed two games, Adam Larsson (3), Russell (14), Matt Benning (20) and Nurse (38). Eric Gryba played 40 games and Brandon Davidson skated in 28 to fill the void. They also had short stints for Mark Fayne (4), Dillon Simpson (3) and Jordan Oesterle (2).
Advertisement
Ad
Advertisement
Ad
2018:
Nurse played all 82 games.
Russell missed four games, Benning (9), Klefbom (16), Larsson (19) and Sekera (46).
They had Yohann Auvitu (33 games), Davidson (23), Gryba (21), Ethan Bear (18) and Keegan Lowe (2) fill in.
2019:
Larsson and Nurse played 82 games.
Russell missed 10 games, Benning (12), Klefbom (19) and Sekera (58).
Edmonton used Kevin Gravel (36 games), Jason Garrison and Caleb Jones (17), Brandon Manning (12), Alex Petrovic (9), Evan Bouchard (7) and Chris Wideman (5).
2020:
Nurse and Bear played all 71 games.
Klefbom missed nine, Russell (16), Larsson (22) and Benning (28).
Those holes were filled by Jones (43), Joel Persson (13), Manning (9), Lagesson (8) and Mike Green (2).
2021:
Larsson, Nurse and Tyson Barrie played all 56.
Bear missed 13 games, Russell (21), Jones (23) and Klefbom missed all 56. Edmonton knew he wasn’t going to play when free agency opened up, so his injury is a bit different, but still important.
The games were filled by Lagesson (19), Koekkoek (18), Bouchard (14) and Dmitri Kulikov (10). Koekkoek was injured for three months which led to his low GP.
Advertisement
Ad
Advertisement
Ad
Injuries happen every season, but it is rare to have the three LD who had played the most games all get hurt within a three-game span. Nurse is only supposed to be out 2-3 weeks, Koekkoek 3-4 weeks, while Keith might be back first. If he is only day-to-day that is a good thing for the Oilers.
The injuries will force Jim Playfair to play Philip Broberg more minutes than he is ready for. It isn’t ideal, but they have no other choice. Very few teams have four left D-men who can comfortably play 20 minutes per night in the NHL. So Broberg, who was playing 20+ a night in Bakersfield, will see his minutes increase. Kris Russell will likely play more as well. Will Playfair pair two righties together? After Keith left the game Barrie and Cody Ceci played 3:24 together, but looking at the shift chart they only started a shift together once. I think their time together was more about them being together after one a partner had changed. Edmonton often doesn’t have a RD change for another RD — it depends who is on the near side of the ice when changing.
Advertisement
Ad
Advertisement
Ad
Losing Nurse and Keith at the same time is worst case scenario for the Oilers as they are clearly the top-two left D-men. Russell and Koekkoek are third pairing players now. Russell will play in the top-four now, and they hope he rises to the occasion. Many D-men across the NHL have played up the lineup for short periods of time. It is when you ask them to do it long-term that issues arise.
The one benefit for Edmonton is they have a light schedule. They play tonight and Saturday and next Wednesday. Nurse might only miss three or four more games. Keith might only miss one or two.
Tonight the forwards need to help the defencemen. Edmonton’s forwards combined for only 12 shots on goal last night. They need to be better, play sound defensively and support the puck. It will make things easier for the blue line. The entire team needs to be quicker to pucks, and move the puck faster tonight than they did in Dallas.
Advertisement
Ad
Advertisement
Ad

Hyman – McDavid – Puljujarvi
RNH – Draisaitl – Yamamoto
Foegele – McLeod – Kassian
Perlini/Benson – Ryan – Sceviour/Turris
Russell – Barrie
Broberg – Ceci
Lagesson – Bouchard
Koskinen
Mikko Koskinen makes his first start since he allowed a goal on the first shot of the game in Winnipeg last week. He needs to be better on low% shots.
Tippett mentioned some forwards are banged up and that will impact his lines. Sounds like Kyle Turris and Tyler Benson will play, but who comes out is undetermined. HE also mentioned he could stick with Broberg/Ceci and Russell/Barrie to start, but Bouchard could move up. With two days off before Saturday, I could see him playing the D-men who start well a lot of minutes. Broberg’s skating will probably earn him 20+ minutes for sure.

Keller – Hayton – Kessel
Crouse – Boyd – Galchenyuk
Roussel – Dzingel – Eriksson
O’Brien – Jenik – Fasching
Advertisement
Ad
Advertisement
Ad
Chychrun – Lyubushkin
Gostisbehere – Mayo
Capobianco – Dineen
Wedgewood
The Oilers have injury issues on their backend, but the Coyotes blueline also has three players with little NHL experience. Kyle Capobianco has played 19 NHL games, Dysin Mayo has skated in 14 and Cam Dineen has played eight.
They have a combined 41 games of NHL experience compared to Bouchard (39) Lagesson (29) and Broberg (2) who have 70.
Yes, injuries suck for the Oilers, but they aren’t facing a juggernaut tonight. The Coyotes forward groups isn’t close to as skilled as the Oilers.
Since McDavid entered the league in 2015/2016, he, Draisaitl and Ryan Nugent-Hopkins have combined for 1,548 points. The Coyotes forward group tonight has scored a total of 1,440 points in that span. Even with the injures on the backend, Edmonton has more skill and depth than the Coyotes. They need to outwork the Yotes.
Advertisement
Ad
Advertisement
Ad