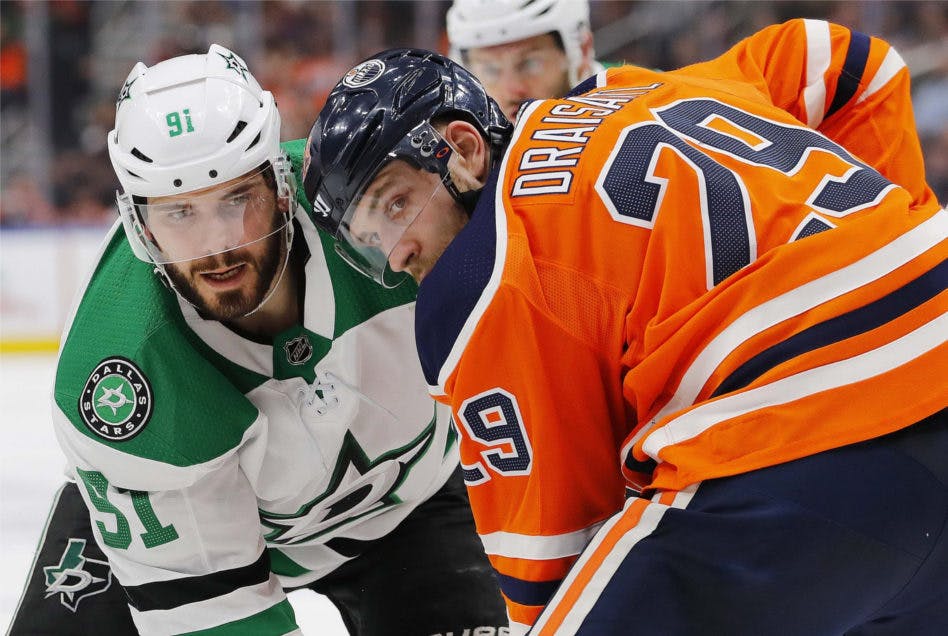 Photo credit: Perry Nelson-USA TODAY Sports
By Jason Gregor
3 years ago
Comments
The sports saying, “You are only as good as your best players,” is usually quite accurate. In hockey you have best players at various positions, and when your best forwards, defenceman and goalie are playing well, your chances of winning increase significantly.
The Oilers are 4-1-1 in the last six games and are in the midst of their second hot-streak of the young season. It has been a streaky start for the Oilers. They began the year 0-2, then went 8-2-1, before struggling through a 1-6 stretch, and now they are rolling again at 4-1-1.
Their best players have led the way during their recent surge.
Connor McDavid has scored 2-5-7, Leon Draisaitl added 1-5-6, Ryan Nugent-Hopkins produced 2-3-5 and Oscar Klefbom has 2-4-6, while Mikko Koskinen is 4-0-1 with a .944sv% and 1.58 GAA. Alec Chiasson continues to produce with three goals during this stretch while Drake Caggiula, Jesse Puljujarvi and Ryan Spooner each have a goal. The Oilers best players are leading the way, which is usually how it works for playoff teams. But it can’t just be a few of your best players. If your goaltender is playing great, but your scorers aren’t producing, it is difficult to win.
Advertisement
Ad
Advertisement
Ad
Right now Edmonton is getting great performances from a player in all three units and they are winning.
You need timely scoring from your complementary players, or solid defending, and lately, that has helped. Spooner scoring the game winner late in the third period v. Vegas was huge. Caggiula and Puljujarvi combining for an early goal against LA helped as well. The third pairing of Matt Benning and Kevin Gravel has settled down and they have been on for more GF than GA during this six game stretch.
The Oilers aren’t producing a lot of offence, but they aren’t giving up much either. They have scored 13 goals and allowed 13 during the six games, with two of those goals coming via empty net in the loss to Los Angeles. Their special teams have been excellent with a 28.6% PP and the PK clicking at 83.3%.
Advertisement
Ad
Advertisement
Ad
Ken Hitchcock hasn’t changed the Oilers defensive system or structure very much, if any, but the players are playing with more vigour and they have eliminated the glaring errors.
Their resurgence was much needed, because many of their Pacific Division opponents are also playing well. Anaheim is 6-1, Calgary is 5-1-1 while Vegas as 5-2 since November 19th. The Oilers hot streak has allowed them to remain in the hunt for a playoff spot.
A victory tonight would move them within one point of Dallas and San Jose with games in hand on Anaheim. It is only game 27, but the race for the playoffs is on and the Oilers, thankfully for Oilersnation, are in the mix.
If their best players from each unit continue to play well they have as good a chance as Anaheim, Dallas, Minnesota and Vegas to make the playoffs.
Advertisement
Ad
Advertisement
Ad

Draisaitl-McDavid-Chiasson
Caggiula-RNH-Puljujarvi
Lucic-Brodziak-Kassian
P.Russell-Khaira-Rattie
Klefbom-Larsson
Nurse-Russell
Gravel-Benning
Koskinen
Spooner finally got some offensive confidence, but he will sit out tonight with an injury. It has been that type of season for him. I’d keep running with Koskinen. He is simply playing better than Cam Talbot right now and the Oilers need wins. Unless he has a really off night, I’d strongly consider starting him for the next five games and then when the Oilers play Winnipeg and Philadelphia back-to-back on December 13th and 14th I’d play Talbot in one of those games.

Benn-Seguin-Spezza
Shore-Hintz-Radulov
Nichushkin-Faksa-Pitlick
Janmark-Dickenson-Ritchie
Lindell-Heiskanen
Bayreuther-Polak
Hanley-Fedun
Khudobin
The Stars got Ben Bishop back against Vancouver and he was stellar, allowing only one goal, but it sounds like they will be careful and not have him start consecutively just yet. They’ve also moved Radulov off the top line to try and get more offence. Their blueline is still missing three key defenders, but the Stars have managed to play well despite key injuries.
Advertisement
Ad
Advertisement
Ad

Tonight, Valeri Nichushkin will draw back into the line-up after his healthy scratch last Saturday. Brett Ritchie will also be in while Gemel Smith is out, and the Stars will need to accommodate the absence of Blake Comeau.
Comeau will miss his first game all season for the birth of his child, which is a pretty understandable reason to miss a game. This season, Comeau has provided some impressive penalty killing, but hopefully the Stars will play a more disciplined game tonight so it isn’t such an issue with him out.
On the good news front for the Stars, Martin Hanzal is looking like he may finally make his season debut this week. He was shut down last season due to back injuries and eventually had surgery on his spine, which he’s been recovering from for the first part of the season. There’s certainly going to be a question of where he slots into the line-up when he returns, but it’s always nice to have more options for Jim Montgomery to work with.

Our 8th annual Month of Giving begins today. Every weekday from today through to Friday, December 21st, we will be auctioning off a package on my TSN 1260 radio show with all the proceeds going to various charities including Santas Anonymous, Operation Friendship Senior Society, The Christmas Bureau, JCI Holiday Hamper Program and a few others.
We will have a new package every day, and packages will include tickets to sporting events, signed jerseys, golf packages, a furnace or AC unit, training sessions for you or your kids, dinners with Oilers and Eskimos and much more.
Advertisement
Ad
Advertisement
Ad
Day #1
We have an awesome package from the Glendale Golf and Country Club.
RESTRICTED ASSOCIATE MEMBERSHIP
You can bid by calling 780.444.1260  or text 101260 between 2-6 p.m. today.
Thanks in advance. All proceeds will help out The Christmas Bureau.