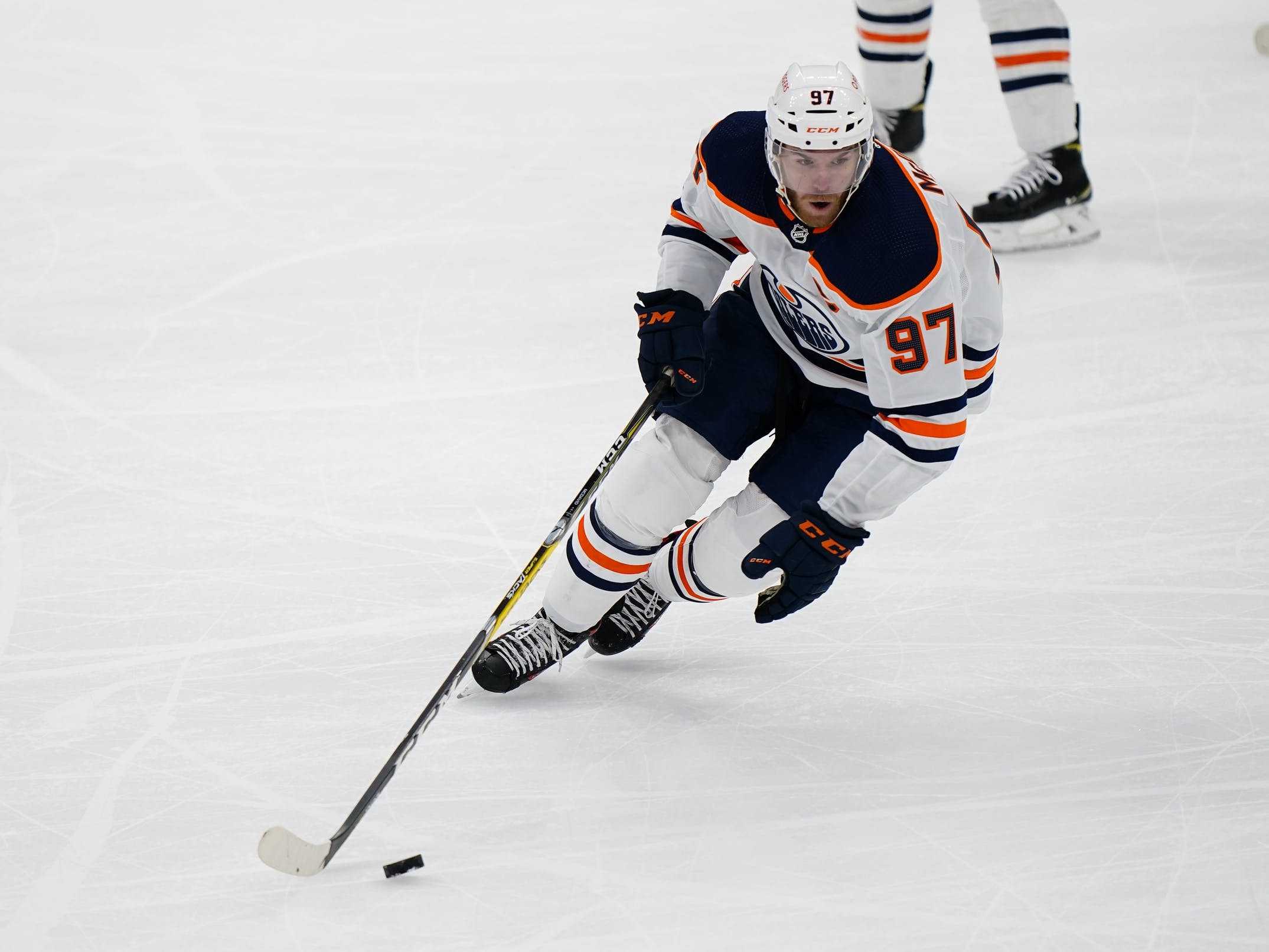 Photo credit: John E. Sokolowski-USA TODAY Sports
By Jason Gregor
2 years ago
Comments
When a team is 3-5 and has been outscored 29-23, there aren’t many reasons to be excited. It is natural for fans to be frustrated, especially when it feels like you’ve been watching the same bad movie over and over.
The Edmonton Oilers are not off to the start they, or their fans, wanted. Allowing 3.63 goals/game (sixth most in the NHL) is not a recipe for success. This year was supposed to be different, but so far the same inconsistencies in the defensive zone and lack of depth scoring remain a problem.
I wanted to look at the offence to see where they can improve. I took a deep look at it in Game Notes, but now let’s look at some more data. The Oilers will need to be sound defensively tonight, like they were in their previous two meetings v. the Maple Leafs, if they want to win.
Toronto is an NHL-best 6-2 this season, because they are winning tight games. Four of their victories were by one goal and the other they won by two goals, with Mitch Marner scoring into an empty net with one second remaining against Edmonton, and 23 seconds remaining against Winnipeg. They lost 3-1 to the Oilers, with Josh Archibald scoring into an empty net. They lost 5-3 to Ottawa on opening night and that is the only game they’ve played with a positive or negative two-goal deficit without an empty net goal.
Advertisement
Ad
Advertisement
Ad
Toronto has been able to win close games. They haven’t made egregious errors while protecting a lead, or made many of them early in games, either. They are winning by not beating themselves defensively, controlling the play in the offensive zone, and scoring 3.25 goals/game.
Let’s look at some numbers from SportLogiq. Toronto has been very good at creating offensive zone possession time, but also decent at limiting OZ possession time. Edmonton has been decent in some areas of creating OZ possession, but they are currently 31st in forechecking success. That is an area they need to improve.
It is interesting to note the Oilers are second best in the NHL at limiting zone entries. That goes against the narrative that many say the Oilers struggle. Where the Oilers have struggled is limiting their opponents’ offensive zone possession time. That is expected with a smaller blueline. It is more difficult to break up the cycle of opposing teams, and it explains why Adam Larsson remains in the lineup. Having puck movers is great, but you need to get the puck to move it.
Advertisement
Ad
Advertisement
Ad
It is clear the Oilers need some more offensive production from forwards not named Leon Draisaitl, Connor McDavid, Kailer Yamamoto and Ryan Nugent-Hopkins. As a team overall, the Oilers are actually in the top-half of many categories when it comes to creating offensive scoring chances. Not finishing, especially the bottom eight forwards, has been an issue.
The Oilers are very good at getting shot on net from the slot. They are third best in the NHL, and they are first in inner slot shots in goal. They need to finish those chances more regularly. They are also good at being accurate, sitting first in the NHL with the best percentage of ES shot attempts getting on net. They just need to start burying those chances more.
Here is how the Oilers forwards rank in the % of their ES shots are going on net.
Advertisement
Ad
Advertisement
Ad
Yamamoto: 17/21 = 81.0% and three goals.
McDavid:  26/33 = 78.8% and three goals.
Puljujarvi: 21/29 = 72.4% with no goals.
Kahun: 14/20 = 70.0% and no goals.
RNH: 19/28 = 67.9% and two goals.
Archibald: 6/9 = 66.7% and one goal (empty net)
Draisaitl: 10/17 = 58.8% with one goal.
Turris: 7/12 = 58.3% with one goal.
Neal: 4/7 = 57.1% and no goals.
Shore: 5/9 = 55.6% and no goals.
Kassian: 6/11 = 54.5% and no goals.
Nygard: 1/2 = 50% and no goals.
P.Russell: 1/2 = 50% and no goals.
Khaira: 1/2 = 50% and no goals.
Ennis: 2/5 = 40% and no goals.
Chiasson: 2/7 = 28.6% and no goals.
Puljujarvi and Kahun have combined for 35 shots on goal at ES with no goals. Eventually, they will score, but it needs to happen soon. And the depth guys need to create more shots, no question. The Neal-Turris-Kassian line had four really good chances last game, but didn’t bury any of them. It was their first full game together, and Tippett is hoping they can build off that.
Advertisement
Ad
Advertisement
Ad

RNH – McDavid – Puljujarvi
Kahun – Draisaitl – Yamamoto
Neal – Turris – Kassian
Nygard – Shore – Archibald
Nurse – Bear
Koekkoek – Barrie
Jones – Larsson
Koskinen
Joakim Nygard, Devin Shore and Slater Koekkoek are in, while Kris and Patrick Russell and Jujhar Khaira come out. Nygard will add some speed to the fourth line, but we will see if they can provide some sustained O-zone time. I prefer Shore and Nygard to Khaira and Russell.
Leafs
Hyman– Matthews – Marner
Mikheyev – Tavares – Nylander
Vesey – Kerfoot – Simmonds
Spezza – Boyd – Barabanov
Reilly – Brodie
Muzzin – Holl
Lehtonen – Bogosian
Andersen
Marner is tied with McDavid for the NHL scoring lead with 12 points. Edmonton has more 5×5 goals than Toronto, 14-13, but Edmonton has allowed six more, 19-13.
The Leafs powerplay has been deadly at 41.3%, scoring 10 goals on 24 chances. Edmonton will need to be disciplined and avoid too many trips to the sin bin.
Advertisement
Ad
Advertisement
Ad

For Toronto, the powerplay has been the driving force behind their early-season success. Converting at a staggering 41.7%, they’ll look to build off that trend against an Edmonton penalty kill that is currently ranked 20th in the league. Both teams have had their share of struggles at even strength and in a season that began without proper training camps, every franchise has found themselves learning on the go and trying to work out the kinks as the season plays on.
It’s still early, but we’re already seeing a bit of a separation between teams in the North division as Toronto, Montreal, and Winnipeg seem to be steadily distancing themselves from the pack. Edmonton will be desperate to show that they aren’t about to waste another year of Connor McDavid and can be expected to play with a near playoff-like intensity as they try to close ground and avoid spending the season playing catchup. For Toronto, the question will be whether they can keep this hot streak that has found them sitting atop the division alive, or if complacency will be what brings the team back down to earth.