Advertisement
Ad
Highlights and Numbers: Edmonton’s defence and goaltending falters in the team’s first loss of the season 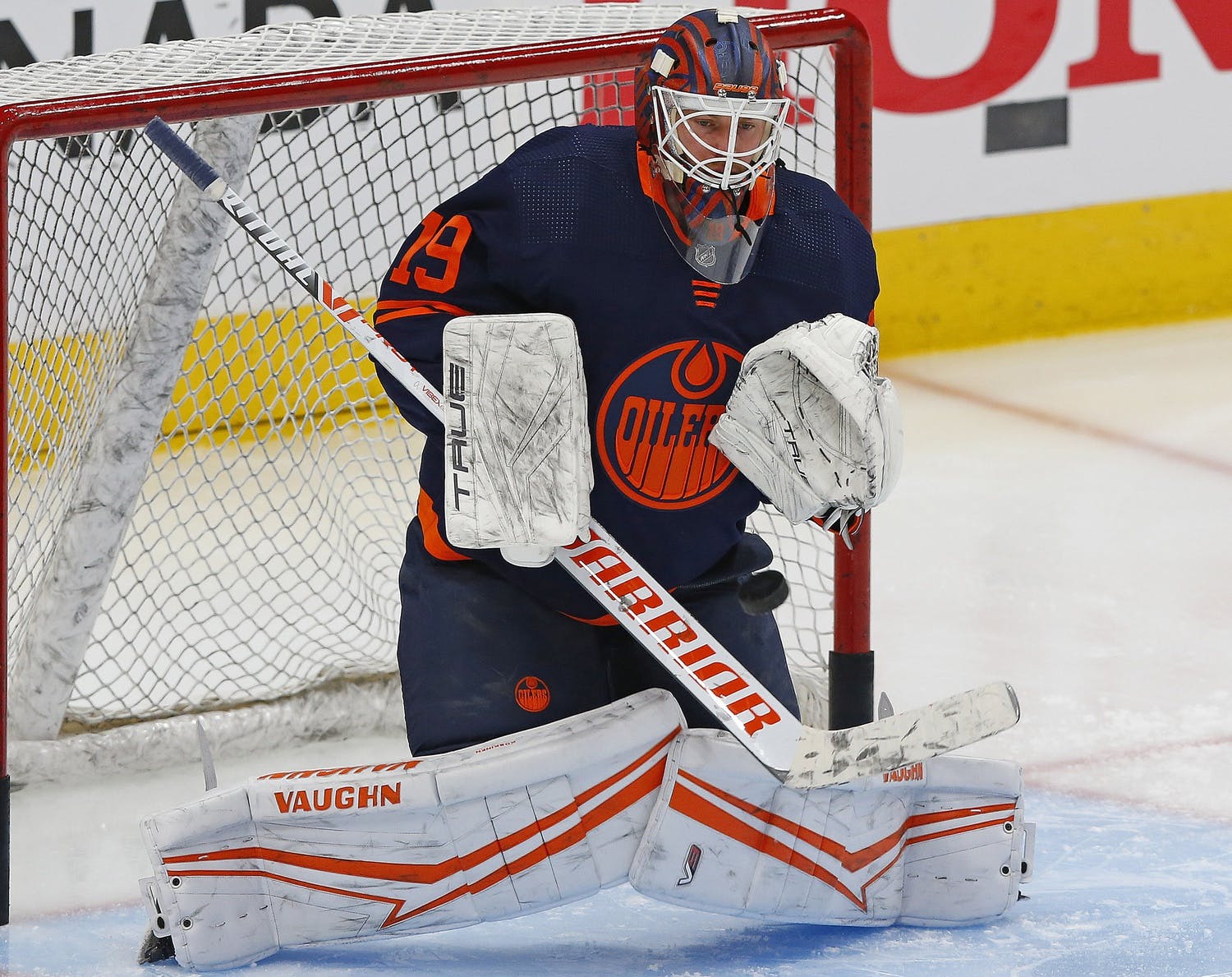 Photo credit: © Perry Nelson-USA TODAY Sports
By Cam Lewis
1 year ago
Comments
After two weeks of going undefeated to start the 2021-22 season, the Oilers have finally lost a game.
There were a few things to like about this game, such as Edmonton’s offence fighting back to tie the game on two separate occasions, but, ultimately, the two primary concerns about the team heading into the season were prevalent during Wednesday night’s loss. That’s defence and goaltending.
The Oilers’ blueline allowed the Philadelphia Flyers to generate a lot of high-danger chances and Mikko Koskinen’s third consecutive start resulted in his first poor outing of the season. It wasn’t a horrendous, one-sided loss by any stretch, but it’s one that leaves a sour taste in the mouth, serving as a reminder that this team still has flaws.

The Oilers had a chance to get things rolling early on when Rasmus Ristolainen took a two-minute penalty for high-sticking. The Flyers killed off the penalty, and then, a few minutes later, they opened the scoring.
Advertisement
Ad
Advertisement
Ad
Travis Konecny cut into the middle of the ice, took a pass from Sean Couturier, and fired a shot that Mikko Koskinen kicked aside. Claude Giroux snuck behind Cody Ceci, grabbed the puck behind the net, and tucked in a wrap-around goal before Koskinen could get back in position. This is an example of the Oilers following the puck too much in their own zone, allowing the Flyers to find open space. Kyle Turris, the centre on this shift, needs to do a better job of shadowing a weapon like Giroux.

A couple of minutes later, Philly made the score 2-0 with another goal that started behind Edmonton’s net.
This time, Koskinen came out to play a puck that was dumped in. He shoveled a soft backhand pass to Tyson Barrie that Flyers forward Nate Thompson was able to intercept due to a hard forecheck. Barrie waved his stick at Thompson and he was able to toss the puck in front and bounced around in the crease before sliding into the net. Barrie should have read the forecheck from Thompson and positioned himself closer to the net. He was focused more here on his breakout than he was on defending.
Advertisement
Ad
Advertisement
Ad

Barrie made up for that gaffe immediately after.
Just 35 seconds after the Flyers went up 2-0, Barrie brought the Oilers back to within one goal. He saw Leon Draisaitl drag the puck up the boards, jumped into the play from the blueline, took a pass, and walked his way around Phaildephia’s defenders and flipped a backhander over Carter Hart. Barrie can certainly be a mess in the defensive zone but there’s no denying how effective he can be as Edmonton’s fourth forward on offence.

This one was a real back-breaker.
Connor McDavid tied the game at 2-2 with a power-play goal late in the second period but the Flyers skated into the intermission with a lead thanks to this buzzer-beater from Cam Atkinson.
You have to give some credit to Atkinson, who kicked a bouncing puck between his legs and batted it at the net with virtually zero time to spare, but Nurse isn’t helping his goalie much by waving his stick around and producing a screen rather than just taking the body.
Advertisement
Ad
Advertisement
Ad

Cam Atkinson kicks it to himself for a dazzling buzzer beater! pic.twitter.com/bjku6VPsgu

The Oilers again tied the game at 3-3 thanks to Zach Hyman, but the Flyers ultimately pulled ahead a few minutes into the third period and didn’t look back.
This was undoubtedly Koskinen’s weakest goal against of the game. Atkinson took a pass from Oilers Legend Derick Brassard, skated down the wing, and fired a shot from just above the face-off circle that made its way through Koskinen. You can find ways to blame the defenders on the other three goals but this is one he really needs to stop.
Also, naturally, this one is frustrating because there was a missed call on Connor McDavid shortly before.

The shot chart above suggests that the Oilers were the better team on Wednesday night but a different story, one that more accurately backs up the eye-test, is told when you look at the high-danger scoring chance numbers.
Advertisement
Ad
Advertisement
Ad
The Oilers controlled possession for a good chunk of the game, ultimately hammering Philly 56-to-38 in terms of even-strength shot attempts. That was especially the case in the second period, as the Oilers were largely in control, going 25-to-12 in shot attempts.
But, all told, it was the Flyers who managed to generate more high-quality chances. Over the course of the game, the Flyers had 13 high-danger chances on Koskinen while the Oilers only generated seven on Carter Hart at even-strength. In that aforementioned second period where the Oilers dominated possession, they only edged Philly out 3-to-2 on high-danger chances.
As I mentioned off the hop, this game displayed the two weaknesses that the Oilers have — defence and goaltending.
The Flyers played a much tighter game in their own end than Edmonton did. While the Oilers were in control of the puck more often, the Flyers managed to clamp things down and stop Edmonton from generating high-quality chances. On the other side of that, the Oilers were largely a mess in their own zone and the Flyers were too often able to turn nothing into something because of it.
Advertisement
Ad
Advertisement
Ad
Koskinen came into Wednesday’s game with a .943 save percentage and this was the first time he looked weak in net. This isn’t really anything new, as Koskinen has always struggled when tasked with a larger workload. The Oilers need Mike Smith back and healthy as Koskinen is at his best when splitting the net.
What did you see from last night’s game? Do you think I’m being too hard on the blueline and Koskinen? Let us know!