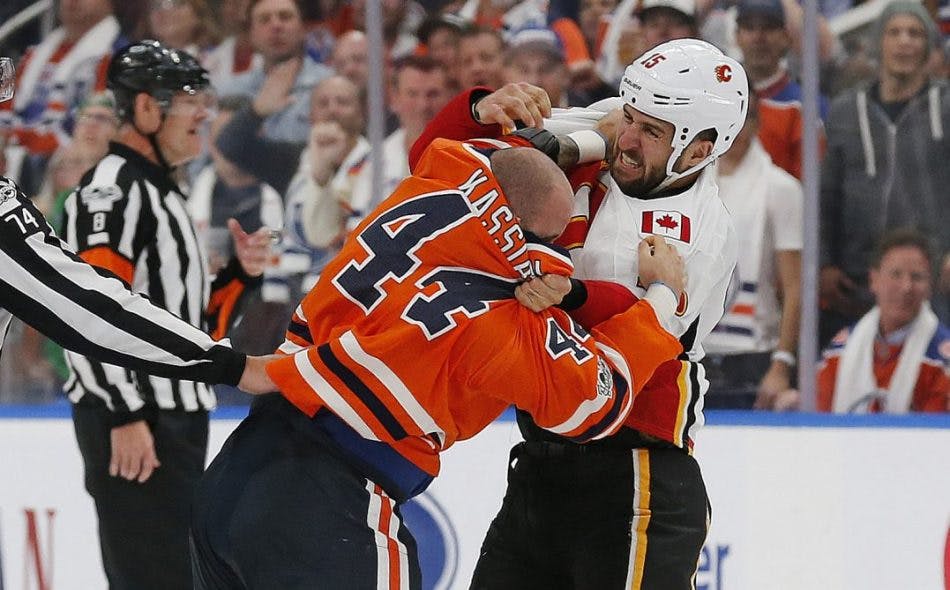 Photo credit: © Perry Nelson-USA TODAY Sports
By Robin Brownlee
5 years ago
Comments
I still enjoy watching a good hockey fight. Despite having all kinds of reasons, most by way of first-hand experience, to know bare-knuckle brawling isn’t great for the brain or the long-term health of the person that brain belongs to, I’ve never once turned away when the leather hits the ice and punches start to fly. Quite the opposite. There, I said it.
Frank Seravalli of TSN tweeted out much the same sentiment last week after a scrap between Marcus Foligno of the Minnesota Wild and John Hayden of the Chicago Blackhawks. It was the last bit of those 140 characters – after Hayden landed a big punch that rocked Foligno — that grabbed the attention of many, including me. There was, to my way of thinking, a common contradiction in Seravalli’s words.

Man, I've always been a fan of fighting, always believed in its place in game. Watching this is hard to stomach. This isn't hockey. https://t.co/7bSk6A4uzU

To which I (and a lot of other people) responded.

Can't have it both ways, Frank. Punches like this, and worse, occasionally land. MacIntyre-Ivanans, Kypreos-Vandenbussche. We know the risks

The catch is, if you are a fan of fighting on the ice and believe it has a place in the game, then “it” – including the possibility one or both of the combatants might land a punch that injures somebody, possibly long-term – is hockey, or at least an aspect of it you are willing to accept. This is not to show up Seravalli. His immediate reaction to Hayden’s big bomb in slow-mo isn’t uncommon. It is, more than anything, an uncomfortable juxtaposition of values. It’s one I struggle with. “I like to see a good scrap, I just don’t want anybody to get hurt.”
Advertisement
Ad
Advertisement
Ad

Feb 11, 2017; Edmonton, Alberta, CAN; Edmonton Oilers forward Ryan Nugent-Hopkins (93) and Chicago Blackhawks forward Vinnie Hinostroza (48) fight during the third period at Rogers Place. Mandatory Credit: Perry Nelson-USA TODAY Sports
We know more now than we ever have about the potential long-term effects of blows to the brain and multiple concussions. We have enough information to know what repeated blows to the brain can do. The vast majority of those damaging blows, in hockey and in other sports, most notably football, don’t come from fighting. And, in the vast majority of hockey fights, blows like the one Hayden landed are rare.
Those flat-out opposed to fighting on the ice often exaggerate the risks. They can point to a handful of examples where careers essentially ended in a fight to make their case. I’m not going to play that card because I’m not setting out to preach. That doesn’t make it less true that we have seen – even leaving out the unquestionable cumulative effect of punches taken over a career – cases where damage is done.
Advertisement
Ad
Advertisement
Ad
The night of Seravalli’s tweet, I cited a fight between Steve MacIntyre of the Edmonton Oilers and Raitis Ivanans of the Calgary Flames. It’s here. Ivanans was never the same. He was done as an NHL tough guy. Then, there’s the ugly sight of Nick Kypreos being left face down on the ice leaking blood in a pre-season fight with Ryan Vandenbussche. It’s here.  Kypreos suffered serious post-concussion issues and retired. There’s also the fight between Ed Jovanovski and Adam Deadmarsh. The concussion Deadmarsh suffered didn’t end his career but it certainly contributed to a concussion that did – when he was accidentally hit by the knee of a teammate.
There are other examples of players who have been concussed or significantly damaged in fights, but those numbers pale compared to blows that come in other aspects of the game – the many high-speed collisions, being pitched into the boards and the glass, being popped on the chin by somebody’s shoulder cap. Taking a knee, like Deadmarsh did. Taking a hit like Leon Draisaitl did the other night. Fighting isn’t the only risk. Far from it.
Advertisement
Ad
Advertisement
Ad

FROM WHERE I SIT

Oct 12, 2016; Edmonton, Alberta, CAN; Edmonton Oilers forward Milan Lucic (27) and Calgary Flames defensemen Deryk Engelland (29) fight during the first period at Rogers Place. Mandatory Credit: Perry Nelson-USA TODAY Sports
Like I said, I’m not going to preach. At the same time, and for the sake of context, my point of view on fighting has evolved over the years as somebody living with the effects of multiple concussions. Between those diagnosed and my best guess, I’m into double-digits. A handful came from sports – most of them in fights while playing lacrosse or sparring to sharpen my fighting skills – others from a motorcycle accident when I was 20 and in a car wreck 10 years ago. The last one came in a charity ball hockey game, of all things a few years ago. The damage is real.
There are days when I can’t remember my mother’s name. That’s frightening. Events I remember one day, I don’t recall the next.  That’s frustrating. More than once during the many years I spent co-hosting the Jason Gregor Show, I couldn’t recall anything about events I’d covered and written about. Jason would ask me about something – often an event we’d discussed on air before – and I’d have to wave him off because, on that day, I drew a blank. People have said, “You should write a book” about this or that. I’m flattered, but in many cases, if I didn’t write it down, I don’t remember it. Or, I remember it one day, but not the next.
Advertisement
Ad
Advertisement
Ad
I can remember hockey statistics or song titles or you-name-it from 20 or 30 years ago but there are days when I have to think long and hard just to be able to tell you what I had for lunch. My son, Sam, is just 11 years old. I don’t want to forget even a single moment of what’s happened and the joy he was brought me since he came into the world or what is still to come. I fear I will. I’m a more prolific note-taker now than when I was a sportswriter. I have to be.
So, that’s where I’m coming from. All that said, and even knowing what I know about damage to the brain and how it has impacted and impaired my life, when the action out on the ice heats up and the gloves come off, I lean in instead of turning away. I know the price too many of these young men will pay at some point for entertaining us in this way. Fighting in hockey is a bad idea. This we know. Yet, like many of you, I watch. That’s tough to reconcile.
Advertisement
Ad
Advertisement
Ad